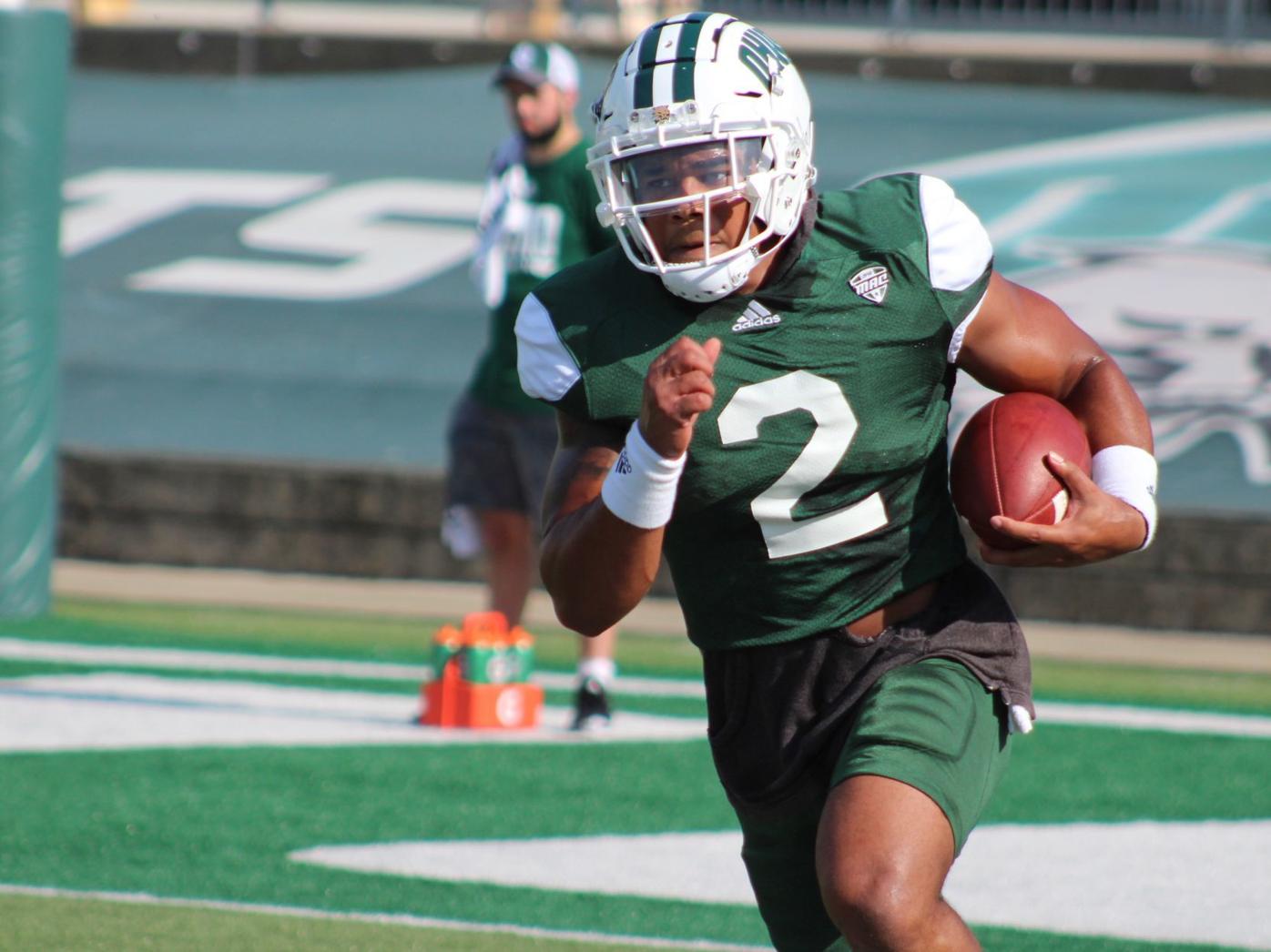 Ohio sophomore running back Julian Ross has increased his reps and opportunities this week in fall camp, and is seen here on Monday, Aug. 12, 2019. 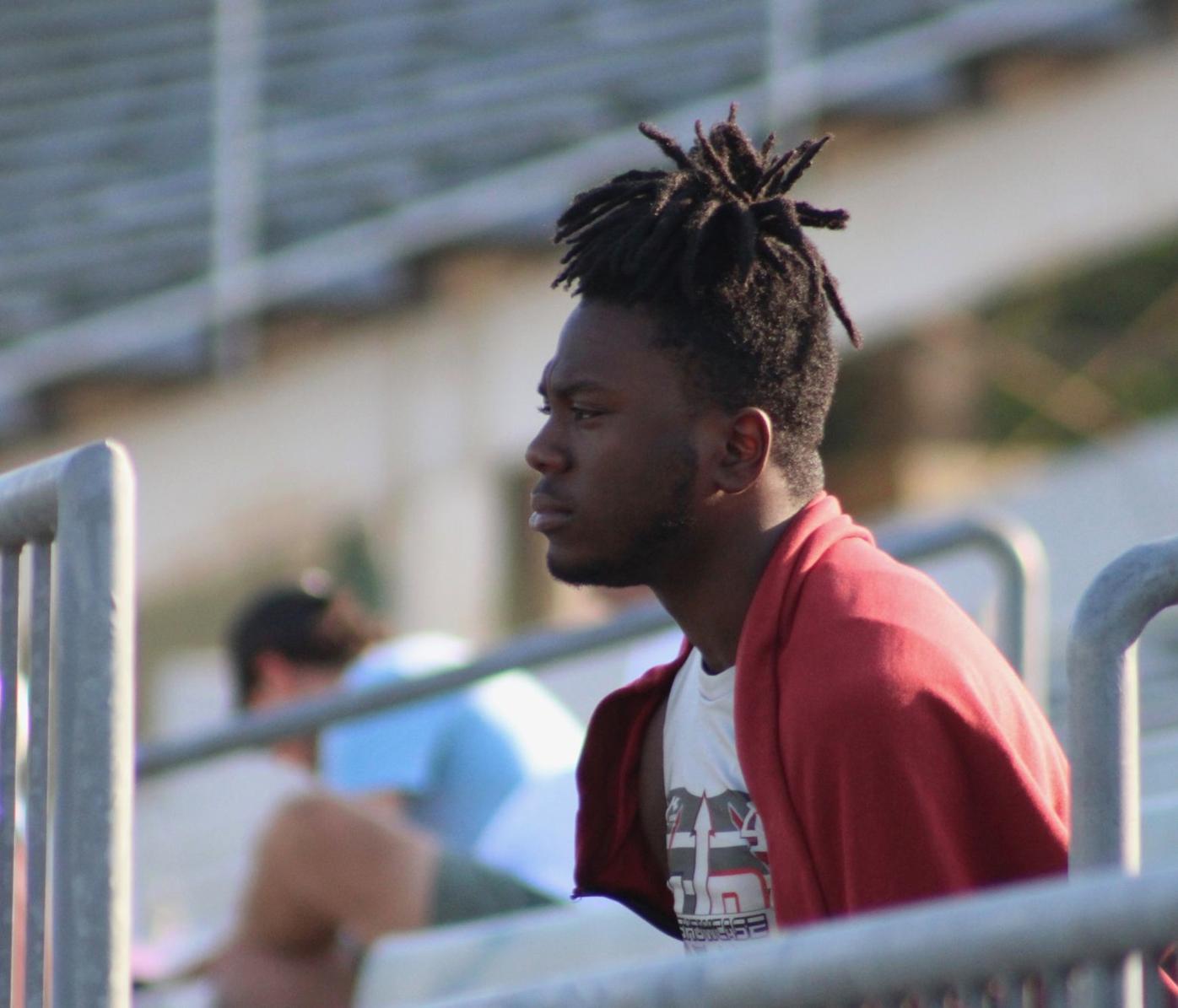 Ohio freshman cornerback Keniuel Gates watches practice on Tuesday, Aug. 6, 2019 inside Peden Stadium. Gates will be added to the active roster soon, and took part in his first practice with the Bobcats on Tuesday, Aug. 13, 2019.

Ohio sophomore running back Julian Ross has increased his reps and opportunities this week in fall camp, and is seen here on Monday, Aug. 12, 2019.

Ohio freshman cornerback Keniuel Gates watches practice on Tuesday, Aug. 6, 2019 inside Peden Stadium. Gates will be added to the active roster soon, and took part in his first practice with the Bobcats on Tuesday, Aug. 13, 2019.

It took longer than he undoubtedly would’ve liked, but Keniuel Gates finally had his first practice with the Bobcats.

Gates, a freshman cornerback that was part of the 2019 Ohio recruiting class, practiced with the Bobcats on Tuesday morning. The team worked inside Walter Fieldhouse — the first indoors practice of camp — after morning showers visiting Athens County.

Gates was the earliest commit of the 2019 class, but was one of the last to get on the field. He had spent the first 10 days of camp usually watching practice from the stands inside Peden Stadium as all the details about his enrollment were squared away.

But Gates was active on Tuesday, and — despite not wearing pads as he goes through the customary acclamation period — was thrown in for a few reps in no-contact team and seven-on-seven segments.

Ohio isn’t expected to NEED Gates n 2019. With the bulk of the secondary returning from 2018, the back end of the defense is anticipated to be a strength this fall. But Gates can now begin to fully get immersed in the program and begin developing as a player.

With Gates in the fold, just three players from the 2019 signing class have yet to appear in a practice. OL Joe Oakes is expected to redshirt this season after off-season surgery, and has been at practice every day but is isn’t expected to suit up for a while. RB Walter Wilbon is also ‘in’ camp, but has yet to participate because of an injury. OC/RB coach Tim Albin was hopeful he would join in a more active role before the end of camp.

The only player from the 2019 signing class that I haven’t seen at camp is DT Denzel Daxon, the highest rated player in the class and of the highest rated recruits every inked by Frank Solich at Ohio. On Tuesday, Solich again said he hoped there would be a resolution on Daxon by the end of the week and he could be part of camp after that.

And now for the usual odds and ends from the two-hour, fully-padded practice at Walter Fieldhouse.

— The CFL scout of the year popped in today as a representative from the Hamilton Tiger-Cats watched practice and talked with several members of the staff. I expect more CFL attention as the season goes on, in particular because of native Canadian quarterback Nathan Rourke.

— I’ve been watching three key components — CB Jamal Hudson, WR Shane Hooks and RB Julian Ross — closely in camp. It’s due, in large part, to their status of being unavailable as camp began. But all three are progressing. Hudson (again in a cautionary red jersey) is doing more and more as each day passes, but still isn’t doing team reps. Hooks, still wearing red, has been taking more reps this week and again had a tough sideline grab on a fade route for a touchdown in a red zone segment. Ross, meanwhile, is out of the red jersey and doesn’t appear to limited at all. Ross is still working to catch up, conditioning wise, however, but has joined the rotation for reps at RB.

— OL Steven Hayes (ankle) and OL Kurt Danneker (ankle) were non-participants after injuries on Monday. Hayes’ setback appears to be minor, while Danneker was aided by a crutch while watching on Tuesday.

— The depth at cornerback is being test at the moment. Hudson is still in a red jersey, and fellow projected starter Marlin Brooks was held out of Tuesday’s practice. The No. 3 corner, Ilyaas Motley, continues to sit out, and redshirt freshman Justin Birchette out on Tuesday in a walking boot. The starting tandem in team segments on Tuesday included former WR Kel Davis and redshirt freshman John Gregory.

— DE Amir Miller (wrist/hand) and WR Drew Keszei (shoulder) were both out and should be out a few more days at a minimum.

— Tuesday had the first ‘Team service’ segments, or basically first team units working against a skeleton of a scout team. What follows is an outline of the lineups used for that portion of practice.

— The above lists should be taken with a grain of salt as injuries or players soon to return could and will alter the top of the depth chart. And it should be noted that Ohio remains committed to building depth in most units. There’s currently 5-6 wideouts slotted in a rotation, and the Bobcats are going at least eight deep on the defensive line as well, for instance.