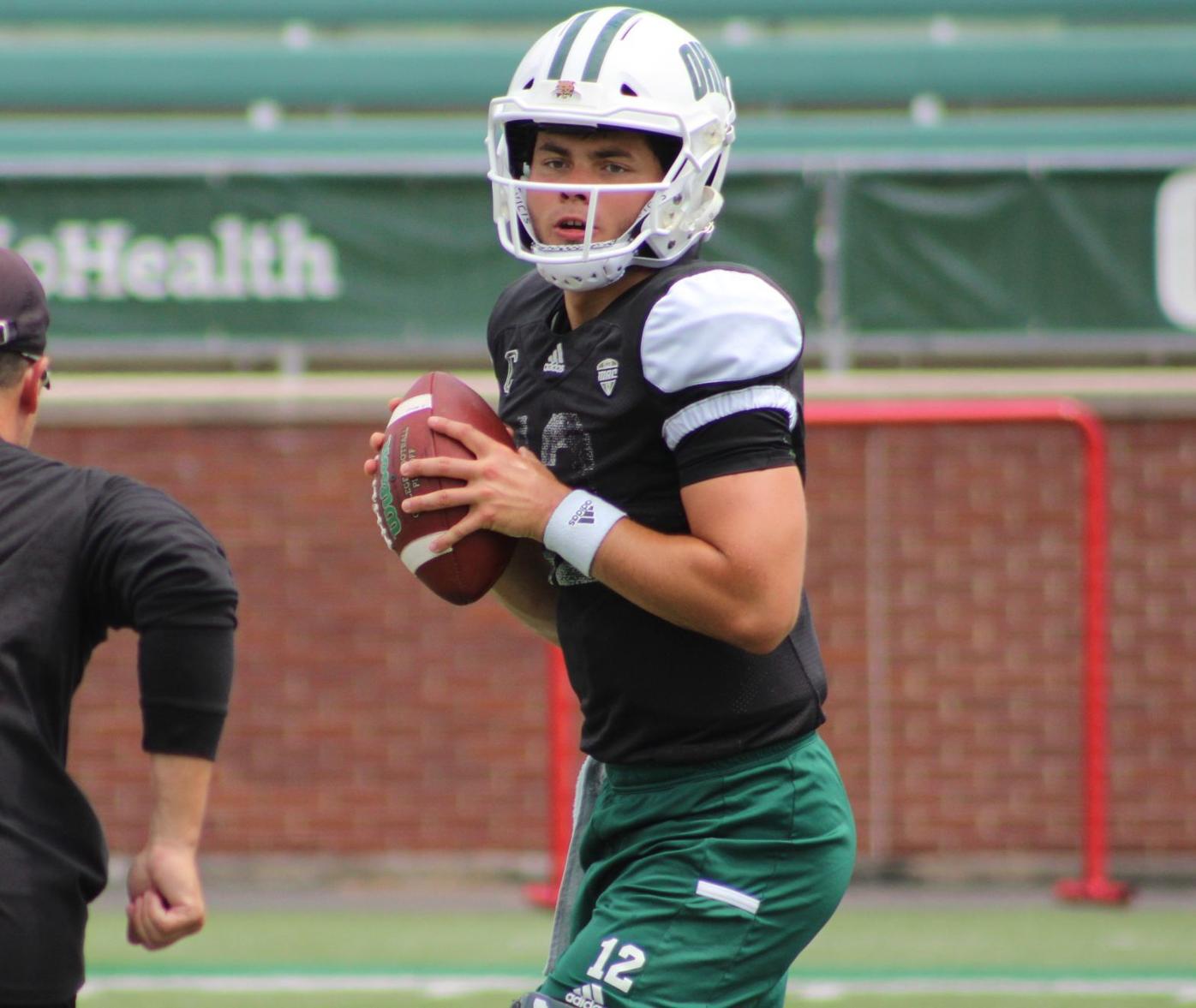 Ohio senior quarterback Nathan Rourke has been named to seven different college football award watch lists prior to the 2019 season. 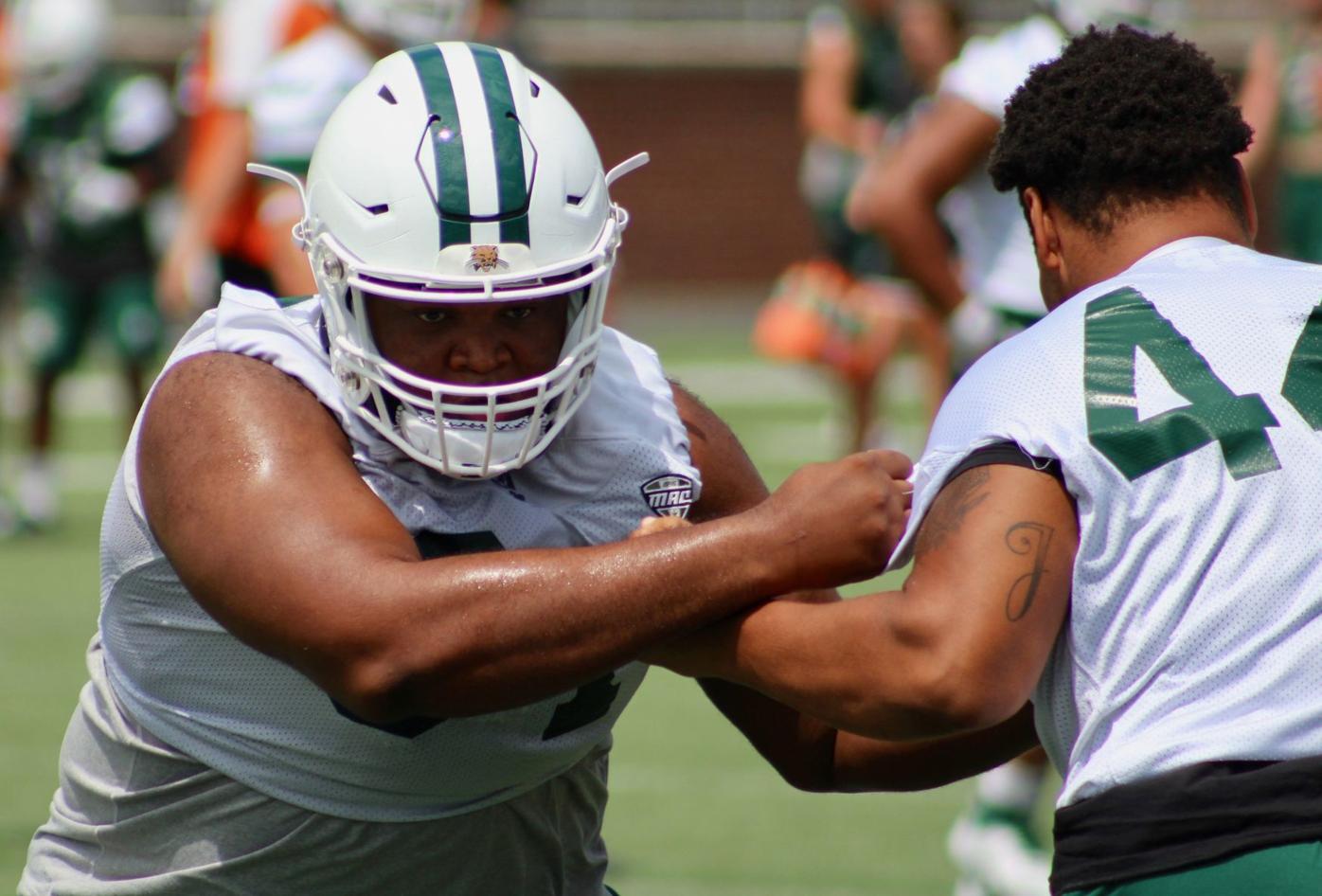 Ohio senior quarterback Nathan Rourke has been named to seven different college football award watch lists prior to the 2019 season.

As first collegiate practices go, it wasn’t much.

But the simple fact that Denzel Daxon was in Athens, and with the Bobcats, had head coach Frank Solich grinning after Thursday’s afternoon practice inside Peden Stadium.

“He is in camp now. He is enrolled. He’ll start score. He’s passed his physical,” Solich said. “He’s with us right now.”

Daxon is the last member of the announced 2019 recruiting class to be added to the roster. He was added to the active roster on Wednesday; Daxon arrived in Athens early Wednesday morning.

On Thursday, Daxon didn’t do much in practice. The Bobcats, nearing the end of fall camp, worked nearly exclusively on special teams. With his arrival, Daxon hadn’t even had time to be placed on a scout team yet.

Daxon was wearing No. 94, took part in the usual assortment of pre-practice drills and spent a lot of time watching.

Listed at 6-foot-2 and 335 pounds, Daxon has a chance to be a rarity in college football — a true wrecking-ball, havoc-causing defensive tackle. He was the highest rated player in Ohio’s 2019 class (.8709 rating from 247sports.com) and was the second-highest rated player ever recruiting to Ohio by Solich’s staff.

Daxon, a native of Nassau in The Bahamas, completed his high school career last fall at Carol City (Fla.). At one point he was committed to the Miami Hurricanes, and as recently as last November was committed to Louisville.

But when the Cardinals made a coaching change, and dropped Daxon from their plans just days before the early signing date in December, he became a Bobcat.

But how long can Daxon be a Bobcat, and how soon could he possibly play? Those questions weren’t able to be answered even though he is now officially an Ohio student-athlete.

Daxon is listed as a junior on the online roster. That indicates that at some point in his athletic career his NCAA ‘clock’ — his five years of collegiate eligibility — had begun. Solich credited his staff for unraveling a myriad of issues surrounding that and getting Daxon to Athens.

Ohio is expected to appeal certain aspects of Daxon’s classification as a junior. That status could change.

But as of right now, Daxon will have three seasons to complete two seasons of eligibility. Currently, he’s not eligible to play in 2019 due to NCAA transfer guidelines.

“That’s still to be determined,” Solich said Thursday when asked if Daxon could play in 2019, or if he five full years of NCAA eligibility.

“It took a long time to get everything unwound to the point where it was clear that he was set to go and get here,” he continued.

“But he’s here, he’s going to play football here. Exactly whether he’ll be eligible this first season or not is yet to be determined.”

Ohio senior quarterback Nathan Rourke, like he has the previous two seasons, has adopted a no social media policy during the season. He officially ‘went dark’ on Aug. 1.

Rourke has missed his name plenty of notifications in the interim. The Canadian-born quarterback has been added nearly every possible college football awards watch list over the course of the last two months.

He’s honored, sure, but he hasn’t paid it any attention.

“If people like you wouldn’t keep bringing it up I wouldn’t know at all,” Rourke said Thursday.

He was joking, I think. But Rourke remains committed to blocking out any such talk. His focus still rests with helping Ohio win a Mid-American Conference championship.

Rourke ranks in the top five of virtually every quarterback statistic in Ohio history. His 77 career touchdowns accounted for is second in program history; Rourke needs five to set that program record.

Those are more things he’s not worrying about.

“All that watchlist stuff is kind of irrelevant at this point. I’m hoping that they stop so we can stop talking about them and we can just get going on the season and start worrying about that.”

Ohio changed up its practice routine on Thursday, after enjoying a day off from practice on Wednesday.

For starter, the Bobcats used their usual pre-game warmup routine — which differs significantly from the usual pre-practice set. And once practice was under way, Ohio worked nearly exclusively on special teams.

As segment after segment rolled by, the Bobcats kept working and going over details for seemingly every possible special teams scenario.

Solich said a regular practice would return to the docket on Friday — Ohio’s last practice of fall camp — but believes such specialized days are needed as the season start draws nearer. It should be noted, Ohio does special teams work every day in practice as a matter of routine anyway.

“It’s good to have some of these kind of days in camp, especially toward the end,” Solich said. “You want to be sharp in every facet, but we’ve always tried to be the best special teams unit in the MAC.

“You have to work at that.”

And here’s the list of usual observations from Thursday.

— There’s a good chance that Athens High School will have three graduates on Ohio’s initial depth chart of the 2019 season. Tight ends Adam and Ryan Luehrman are expected to be in the top two spots of their position group. In addition, former Bulldog Brody Rodgers — a third-year sophomore — has been fixture all camp long as the backup at right guard. Rodgers hasn’t missed a practice, or a rep from what I’ve seen. Rodgers worked at tackle in the spring, but has been consistently on the second unit at guard throughout camp.

— Starting weak side linebacker Eric Popp was held out of practice on Thursday. It’s just the second missed practice of the entire camp for the entire contingent of scholarship linebackers on the roster.

— WR Jerome Buckner took part in practice on Thursday after sitting out workouts on Monday and Tuesday. He’s probably still the top option in the slot for Ohio, but has been pushed of late by redshirt freshman Ty Walton.

— WRs K.J. Minter and Tyler Tupa were both out again on Thursday. Both figure to be a part of the WR rotation if healthy.

— The defensive line depth has held up fairly well at the top of the depth chart, but has taken some hits on down. Defensive ends Amir Miller and Bryce Dugan remain out, and defensive tackles Jeremiah Burton and Michael Massinople are also sidelined.

— Ohio capped practice with a series of field goals. Kickers Louie Zervos and Tristian Vandenberg lined up for a series of kicks with crowd noise blaring from the speakers, a rushing front, and the rest of the team clustered around the kicking point for added pressure. Zervos made kicks from 40, 50 and 52 yards, and missed a 45-yarder. Vandenberg, a true freshman, made the 40-yarder, but missed from 45 yards on up.