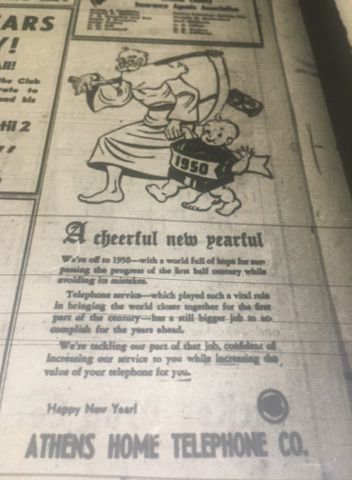 This ad from 1949 for the Athens Home Telephone Co. wished Athens County residents a happy new year while also discussing how telephone service played a “vital role in bringing the world closer together for the first part of the century.” 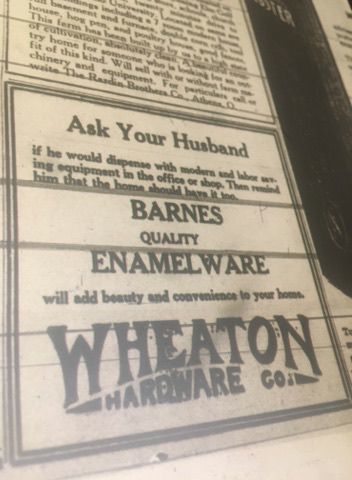 “Ask your husband” this ad from 1929 proclaimed, attempting to convince women to ask their husbands for enamelware home goods. 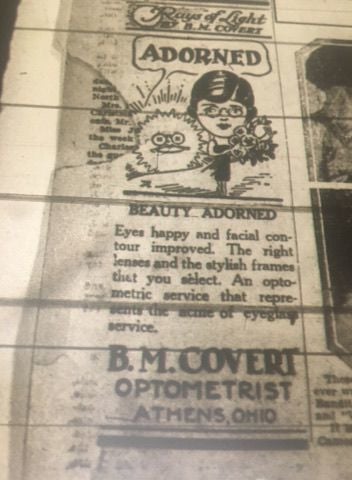 This ad from 1949 for the Athens Home Telephone Co. wished Athens County residents a happy new year while also discussing how telephone service played a “vital role in bringing the world closer together for the first part of the century.”

“Ask your husband” this ad from 1929 proclaimed, attempting to convince women to ask their husbands for enamelware home goods.

- The more things change, the more they stay the same. Similar to how The Messenger runs a year in review series each year now, The Messenger of yesteryear was also reviewing the year. The only difference is reporters created a day-by-day review of the year, citing important births, deaths and events.

- A man in Middleport was featured for an article due to his facial hair habits. Nicholas Hennessey, 70, was said to be “in fine health and never was really ill in his life,” but had also not shaved his upper lip since he was 18 years old.

- The Athens City buildings were receiving some repairs and were also given a new coat of paint over the holidays.

- The construction of the Jacksonville/Trimble high school was just about to begin, and the whole project was bid at $17,640. The Albany High School was also being rebuilt, before it became a one-campus district. That construction was judged to cost about $89,000.

- “Dance the old year out” a headline proclaimed, noting that there were two New Year’s Eve dances planned in Nelsonville for the changing of the decade. The first, planned by the Nelsonville Eagles, promised a live band from 9 p.m. until 2 a.m. the next morning, and the second, planned by the Elks, promise breakfast for the morning of Jan. 1.

- Also in Nelsonville, the police chief of the time, James Cope, was warning youngsters against using any new “weapons” they may have received for Christmas. He warned them that using “airguns or rubber slingshots” inside the city would land their parents liable for any damages caused.

- In advertising ... Harris Furniture invited residents to “Ring in the New Year with an Old Fashioned sale.” The store advertised items such as a pair of pillows for $4.95 and a mahogany drop-leaf table for $79.95.

- Here’s a crazy story: Kroger security officer Jim Shay helped nab a man accused of involvement in a bad check ring. The man attempted to drive off in his truck after being questioned about his payment at the Athens Kroger, and Shay jumped into the truck bed as the man was speeding away. Another Kroger employee, who happened to be a volunteer firefighter, radioed in to the fire department to report the incident. A police dispatcher overheard the report and alerted area law enforcement. The truck was eventually stopped by an officer in Nelsonville after Shay began throwing items from the truck bed.

- In sports, Mike Bruning recovered from a leg injury during practice earlier that week right in time for the Bulldogs’ match against the Ironton Tigers. Athens won the game 61-53, and Bruning threw in 22 points for the Bulldogs.

- At the movies: the Varsity Cinema played “Star Trek.”

- In its “Year-in-Review,” the Messenger recounted the many fires that occurred in Athens during the ‘80s. In 1982, Belks department store caught fire and sustained heavy damage. Just two years later, the Carpenter Block, which contained six businesses at the time, was ablaze. In 1985, it was the Athens Hotel; in 1986, the Pizza House. The Athena Cinema caught fire in 1988.

- After 23 years of delivering mail to roughly 453 families in the Albany area, Postal Carrier Paul Gaston retired. During his tenure, accident-free.