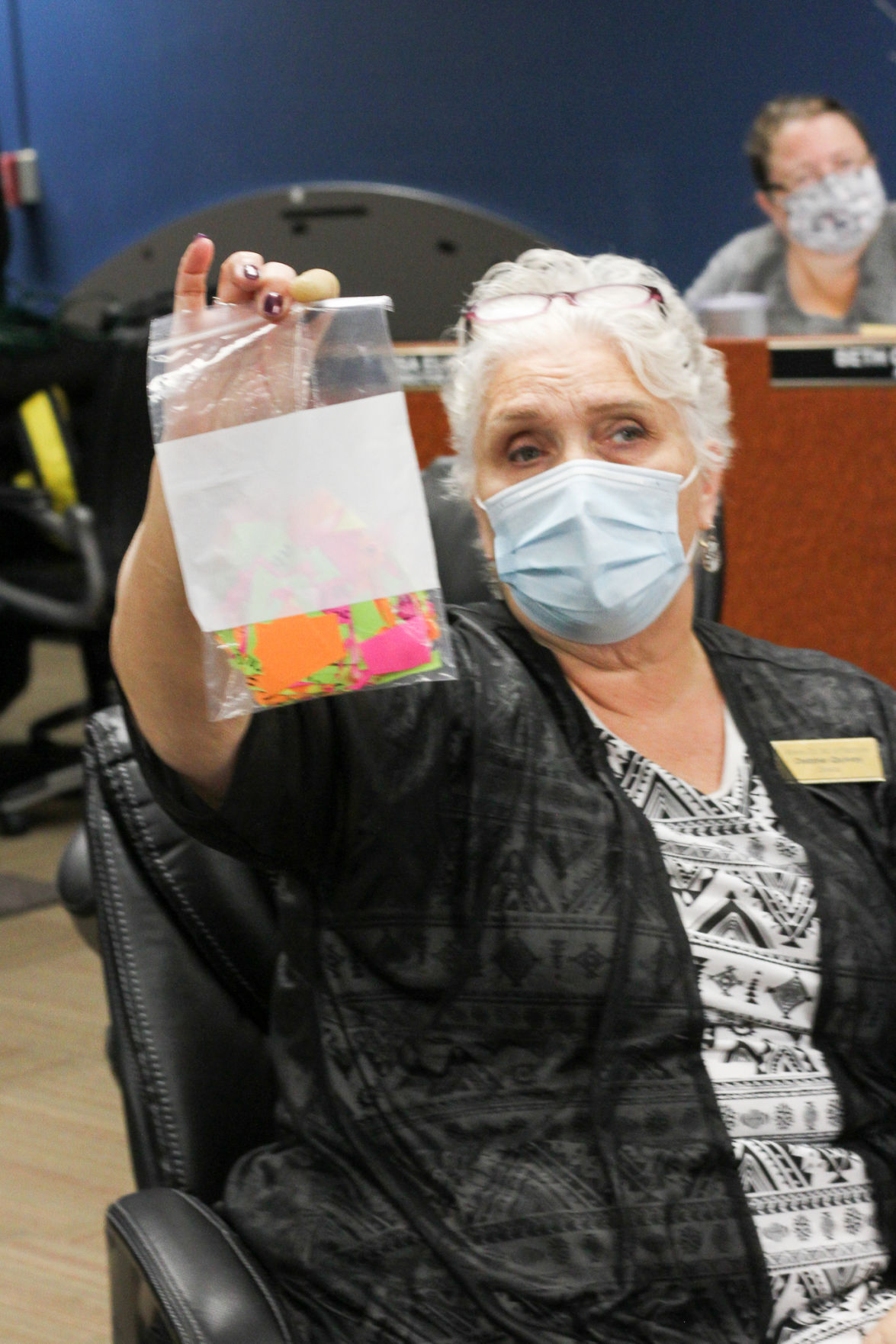 Deb Quivey, director of the Athens County Board of Elections, holds the ripped remains of signs found in voting booths at the Alexander voting location on Nov. 3, 2020. 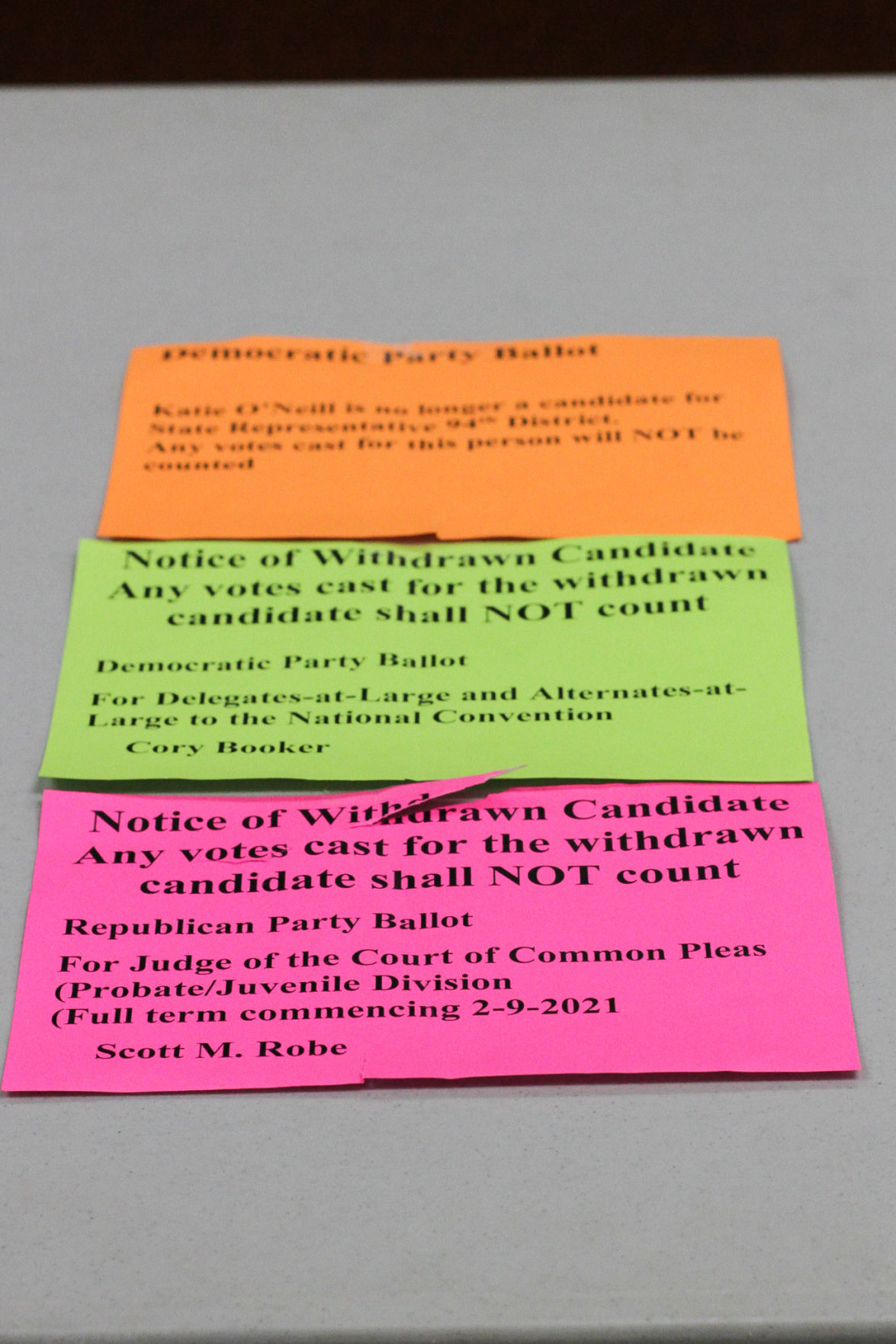 These signs were on display during the May Primary Election to instruct voters on how best to cast their vote.

Deb Quivey, director of the Athens County Board of Elections, holds the ripped remains of signs found in voting booths at the Alexander voting location on Nov. 3, 2020.

These signs were on display during the May Primary Election to instruct voters on how best to cast their vote.

During a special meeting held Tuesday afternoon, members of the Athens County Board of Elections governing board and the director and assistant director said allegations of election tampering in the the 94th House District representative race were off-base, and said the incident had been a “human error.”

Ultimately, the neon-colored signage viewed in booths of the Alexander Local School polling location, which served four precincts, was deemed not worthy of further investigation as it was signage left in the booths from the primary election. During that race, the Athens County Elections Board ruled against Democratic candidate Katie O’Neill after an Athens County resident questioned her eligibility based of residency.

The Board said no malicious intent was behind the signage’s placement during the General Election, and only the Alexander precinct officials had not removed the instructions.

“So it was a human error, there is no evidence that there was any attempt to sway the election in her opponents favor,” said Chair of the Athens County Board of Elections Kate McGuckin. Later, the Board voted unanimously in favor of sending an apology to O’Neill for the signs.

O’Neill told The Messenger Wednesday afternoon that she was not informed of the Board’s Tuesday afternoon meeting, held in the Athens City Council Chambers. She said she is still waiting to hear anything from the Elections Board and their legal council, Athens County Prosecutor Keller Blackburn, and never received a copy of the over-400-page investigation report, which is a public record.

The signs inside voting booths on Nov. 3 instructed voters that any votes cast for Katie O’Neill, a Democrat candidate for the position, “will NOT be counted.” The signs also noted “Democratic Party Ballot” at the top. General Election day ballots do not have a party.

Two further neon signs were alleged to be on display in the booths at the same time — each was title “Notice of withdrawn candidate.” The first noted that for a Democratic Ballot, votes cast for Cory Booker “shall NOT count;” and the other noted that for a Republican Party Ballot, votes vast for Scott Robe would not be counted.

The signs referencing O’Neill, who was running against incumbent Rep. Jay Edwards (R-Nelsonville), caused consternation and confusion as voters wondered if she had dropped out.

On election day, O’Neill posted to her campaign Facebook page asking for information about “election fraud” and the signs. On Nov. 6, O’Neill said the Athens County Board of Elections had “interfered” with both of her elections.

“I wanted a fair election and the Athens County Board of Elections interfered with both of my elections,” she said in a statement posted to her campaign Facebook page. “The Ohio Supreme Court ruled 6-1 that the Board of Elections ‘abused its discretion’ and ‘clearly disregarded applicable law’ by voting me off the primary ballot.”

Her statement continued, saying the signs “materialized” at a polling location during the general election, and “could be seen for hours by everyone present.”

“The Athens County Board of Elections imposed an oppressive narrative that I was unqualified to be on the ballot from beginning to end,” she wrote. ”Please contact me with your experiences so that we can ensure that this never happens again. Did you receive the orange sign telling you not to vote for me? Did you see it at a polling location in the primary or general election?”

She further noted that she is in contact with her lawyer, Louis Grube, of Paul W. Flowers and Assoc. to discuss the matter.

The investigation was conducted by Director Quivey. She noted that all of the materials from the precinct were removed and put aside in a special location to preserve evidence. All of the polling location directors from the 94th State Representative District — 19 in total — gave certified statements about “improper documents” in their booths, in addition to signed statements from Boards of Elections in the other counties which are touched by the district.

All but the Alexander polling location director certified there was no signage in their booths.

In her certified statement, the Alexander Polling Location Director said the signs were noticed at about 9 a.m. The County Board of Elections Office was consulted, as was the Athens County Prosecutor’s Office, and election officials then began removing the flyers.

One booth’s flyers remained, as “each time an election official from both parties went to remove flyers, the booth was occupied.”

Quivey told the Board members there were only 6 polling booths open at the location, due to COVID-19 distancing restrictions.

The Polling Location Director’s statement said that around 1:30 p.m., a voter questioned a passing election official about the signs’ presence in the booth. The official apologized and removed the signs, as well as offering a new ballot and explaining why the booth’s signs were not removed yet.

According to Quivey’s investigation, there had been 883 ballots cast at the Alexander polls before 2 p.m. There were about 1,337 ballots cast in total at the location on Election Day.

Edwards also won the election by over 9,000 votes, Quivey said.

“I gave every benefit of the doubt that I could to Miss O’Neill, because I felt that was only fair,” Quivey said, in regards to her investigation.

O’Neill said she was not satisfied with Quivey’s apology and her insinuations that there were no illegal activities are false.

“There was an attempt to influence voters to cast against the candidate,” O’Neill told The Messenger Wednesday. “My main question is, why were the signs created, and who ordered for them to be displayed?”

She said her goal with pressing the board on the matter is to ensure it never happens in another election.

“I never want to see an interference in an election like this again,” she said. “That’s the whole point.”

In a good-faith effort to ensure the matter is resolved quickly, the Board vowed to have all races from the Nov. 3 election certified and finalized by Friday, Nov. 13 to allow full transparency.