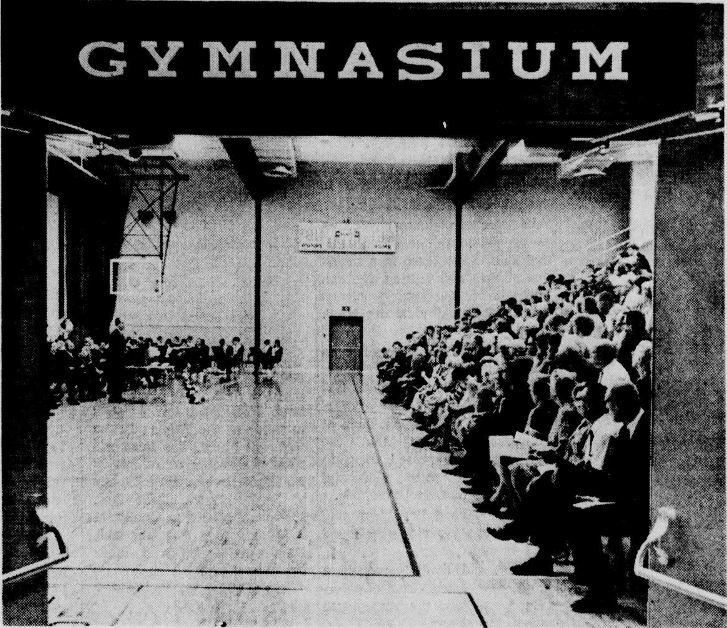 Pictured is the entrance to the Athens High School gymnasium in The Plains. It is seen packed for a 1968 ceremony honoring the first school year in the new building. 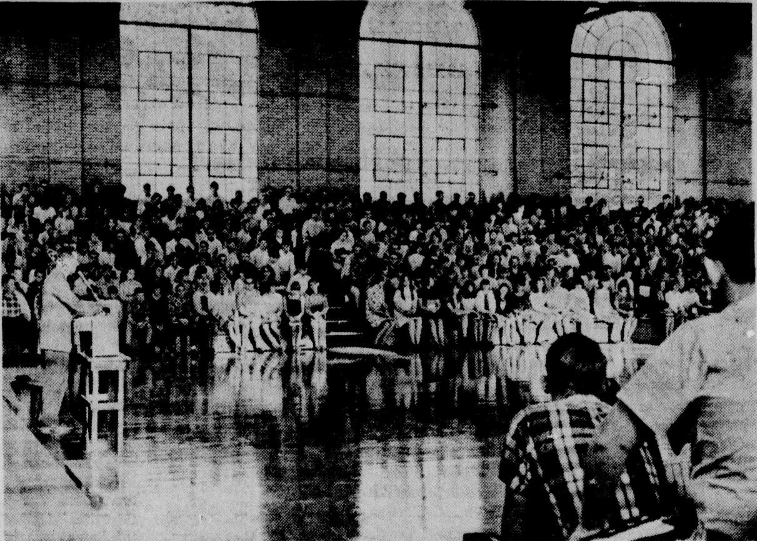 Pictured is an assembly from the fall of 1967, when students of the consolidated Athens High School met for one of the first times. The school seen here is the former AHS (now Athens Middle School). The new high school in The Plains hadn’t been completed yet. 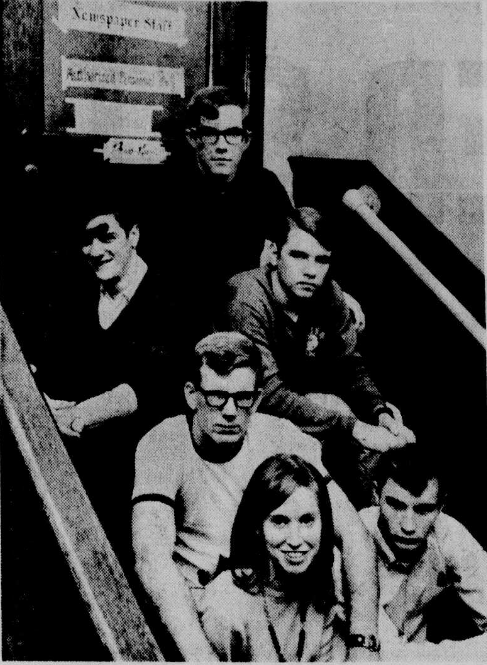 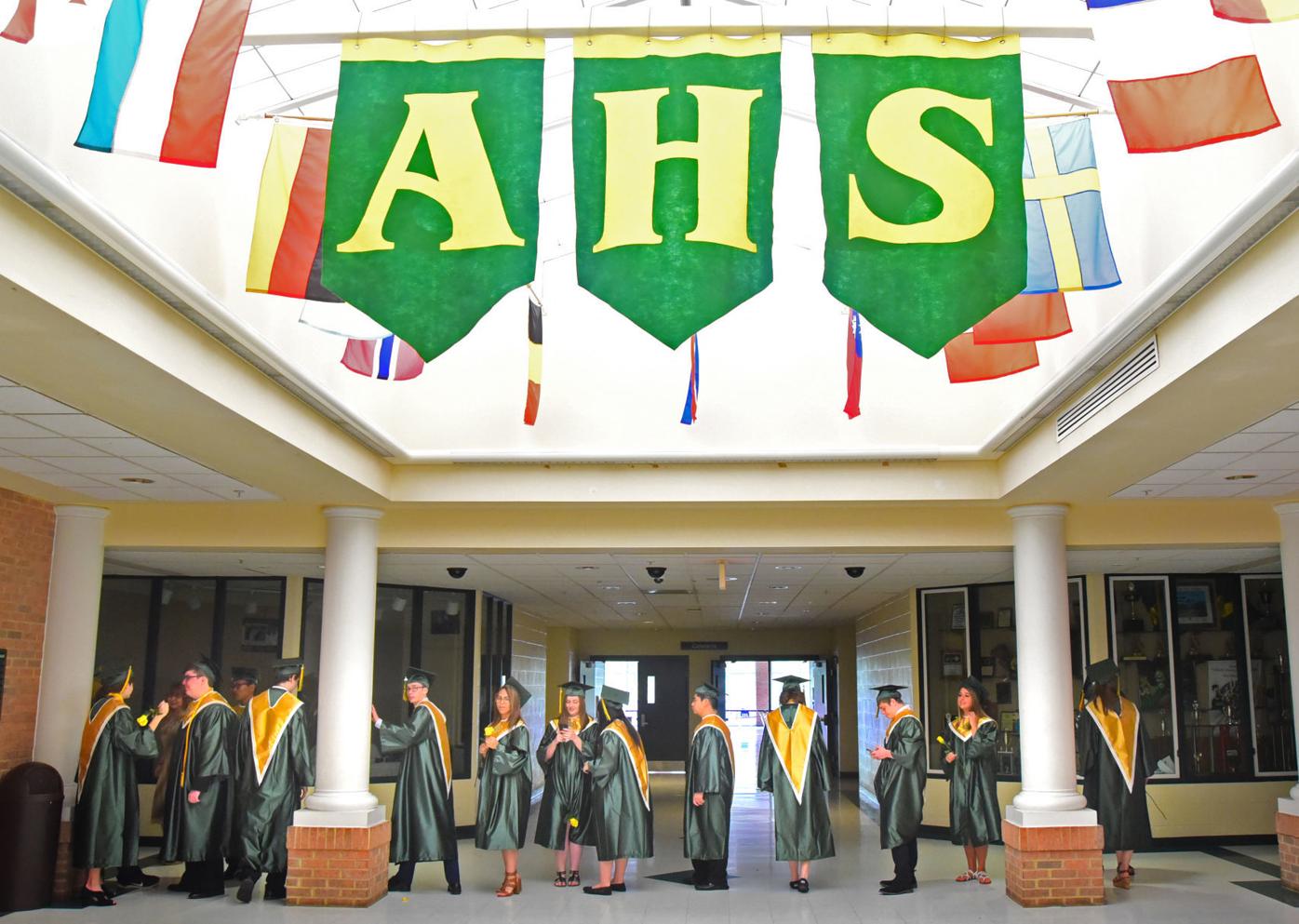 A line of Athens High School graduates are seen in 2017 waiting to enter the gymnasium.

Pictured is the entrance to the Athens High School gymnasium in The Plains. It is seen packed for a 1968 ceremony honoring the first school year in the new building.

Pictured is an assembly from the fall of 1967, when students of the consolidated Athens High School met for one of the first times. The school seen here is the former AHS (now Athens Middle School). The new high school in The Plains hadn’t been completed yet.

A line of Athens High School graduates are seen in 2017 waiting to enter the gymnasium.

Editor’s Note: The Athens High School Class of 1969, the first to graduate from the current high school in The Plains, recently celebrated its 50th reunion. We are recognizing 50 years of history with a two-part series.

For decades, Athens High School has resided on an appropriately named High School Road in The Plains. The campus — from the one-floor school building to the adjoining stadiums — is familiar to most residents of the communities that surround the school. In those 50 years, many lifelong residents of Athens, The Plains and Chauncey have walked the high school’s hallways either as students or guests.

Prior to the school’s construction, students from these communities all attended separate schools. The building we now know as Athens Middle School housed high school students from Athens. The 1960s brought massive changes to the Athens City School District, which proved to be equal parts exciting and nerve-wracking for the entire area.

The notion of consolidation began around 1960. This is when William W. Chase, an education professor at Ohio University, conducted a survey of local schools. In June of that year, The Messenger reported that Chase recommended consolidations of multiple school districts after completing his survey. Chase suggested that the ultimate goal should be to combine all schools into one taxable administrative unit that would still be made up of multiple buildings.

It took a few years for this idea to build momentum. A possible merger of the Athens and The Plains high schools was discussed at a board meeting in early 1963. This led to some contention, particularly among those in The Plains — residents felt left in the dark about what consolidation would mean for student placement and transportation. There were rumors that seniors at The Plains High School would not receive their diplomas and that the school’s charter would be revoked. There were also discussions on consolidation options with districts in Albany and Waterloo Twp.

The decision came on July 1, 1964: Athens, The Plains and Chauncey agreed to eventually consolidate. Then came the planning of how to make consolidation work.

In February 1966, school Supt. Fred Chase reported plans for the new high school building, which would use a “non-graded system” that was based on student ability rather than grade level and would emphasize self-direction and individuality in students. At this early stage, the school was reportedly going to feature a 6,000-square-foot library, movable walls and even a “teaching tank” for swim lessons. A story reported the overall school building would cost $2.25 million, and the school district had received a $104,000 federal grant for the project.

In June 1966, an informal groundbreaking ceremony was held at the future site of the new high school, to be located in The Plains. Construction bids for the high school building opened a month later.

Despite the support for the planned curriculum, the school also came with high operating costs, which covered vocational education, remodeling and overall operation. In December 1966, city school officials planned to add an additional tax levy to the upcoming May ballot to help pay for the increased operating costs. At that point, the new building was estimated to open in the fall of 1967.

Consolidation also brought new anxieties to the communities involved. In April 1967, those at Chauncey-Dover High School held a meeting with Supt. Chase regarding what the upcoming changes to the school would mean for their students. Chauncey residents were concerned about losing some of the facilities at their current high school as well as their students sacrificing their identity at a new school. Chase suggested that a committee of students from The Plains, Athens, and Chauncey (later known by the acronym PAC) could be formed to assist with transition and encourage the students to form a new collective identity.

A group of students was indeed formed. Students from each district voted for the consolidated school to keep the original AHS mascot of the Bulldog, and also voted for the new school colors to be green and gold.

As plans for the new school picked up steam, so did questions regarding the new school system. In June 1967, a special meeting was held to answer questions about the subject. In particular, residents were concerned about the lack of attention given to middle school students as the high school was being built. At one point during consolidation, the seventh and eighth grade classes were housed in two separate school buildings, and middle school students received decreased courses and programming compared to the high school.

The new high school did not open in the fall of 1967 as was hoped. Instead, high school students from the three communities came together to study at the old AHS building, which now serves as Athens Middle School.

Messenger news articles from those years told of the various “firsts” at the new school. For instance, the new school newspaper was called “Matrix” and featured Candy Perry as the first editor-in-chief. Other students on the masthead that first year included Ron Kozma as assistant editor, Dan Bauer as sports editor, Bill Hoffee as advertising manager, Bill Cline and Evan Schneider as lead columnists, Steve Reis as art editor and Linda Gretz as the typist. The newspaper was printed at the school. The Messenger reported that Athens High School’s student newspaper debuted in 1908, the second-ever student-run publication in the United States.

Meanwhile, the newly built school building was opened to local residents for the first time in October 1967 for a public tour. The tour was meant to gain community support for an oncoming vote on a tax levy that would be needed to fully fund the school’s new operations. More than 1,000 residents attended and learned about the flexible programming the school planned to provide to students.

Features shown to guests included the gymnasium, auditorium, library, and four main academic wings, including a “fluid wing” for English and social studies. The fluid wing featured movable walls and could be adapted for different types of learning experiences.

The new Athens High School building finally opened its doors for the 1968-1969 school year and welcomed all the newly consolidated students from Athens, The Plains and Chauncey. The school was well received among students and faculty, and attracted so much attention that the school held tours throughout the year for local, out-of-town and even international guests.

A public ceremony was held the September 1968 to celebrate the first school year, featuring Dr. Martin Essex, the state’s superintendent of public instruction. Essex, a native of neighboring Vinton County, spoke of a changing America in the 1960s and said education would be the answer to helping a new generation make its way in the modern world.

“I look on this school with great enthusiasm and amazement,” Essex told a packed crowd in the new, 2700-seat gymnasium.

Ohio University President Vernon Alden also spoke at the ceremony. The school was presented with a flag that had flown over the U.S. Capitol.

There were hiccups during the first school year, of course. Richard Stacy, the consolidated AHS principal, addressed several early problems at the school in an interview with The Messenger. One common concern was that the 15-minute block scheduling provided students with too much free time, which many were reportedly wasting with socializing rather than studying. Other issues included behavioral problems such as theft, underage smoking and an increase in early morning tardiness. Stacy pointed to unsecured lockers as part of the reason for ongoing theft and cited students still getting used to new bus schedules as part of the problem for tardiness.

Despite some of these common problems, Stacy also saw many students and teachers favoring the new non-graded operation system. The system reportedly caused a decrease in students cutting class along with an increase in students’ grades and interests in work-study and other independent study programs.

The curriculum has changed quite a bit in the years since the “new” Athens High School first opened its doors. However, the building has remained a core symbol of the community for the past five decades. For the alumni of that early system, the school still holds many memories of a groundbreaking and revolutionary education system.

Part two of this series, to be published next week, will feature the recent 50th reunion and former students’ recollections — from ambitious new classes to new friendships and senior pranks.