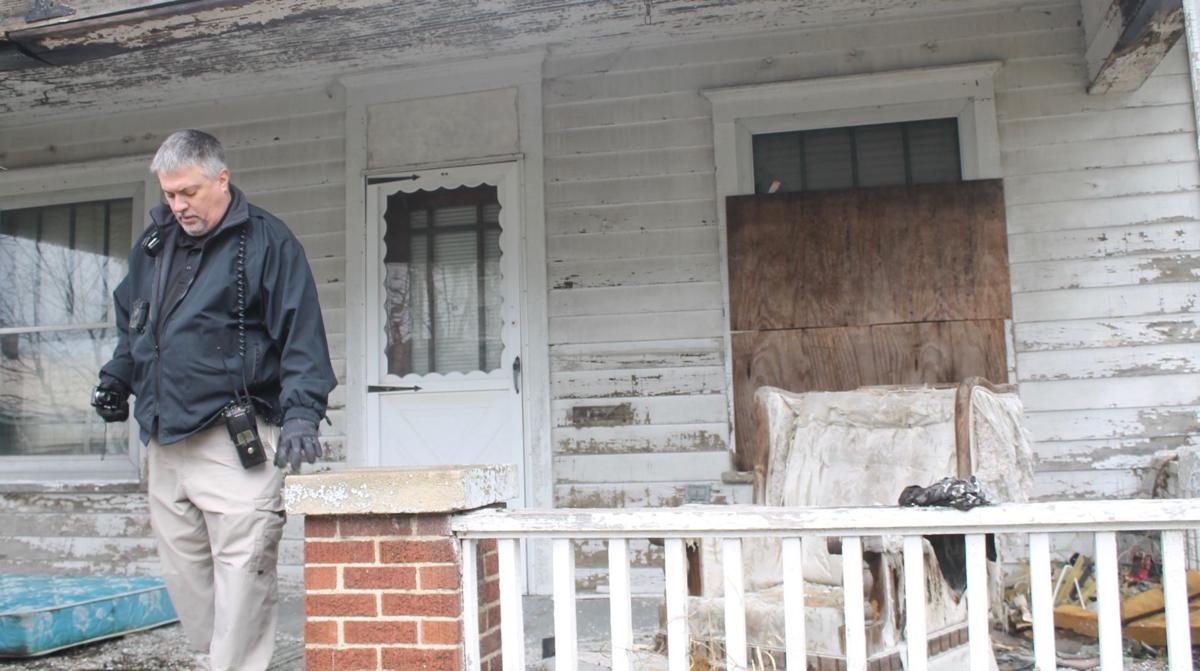 City of Logan Code Enforcement Officer Joe Posey walks down the steps of a vacant home after checking to see if anybody was inside. 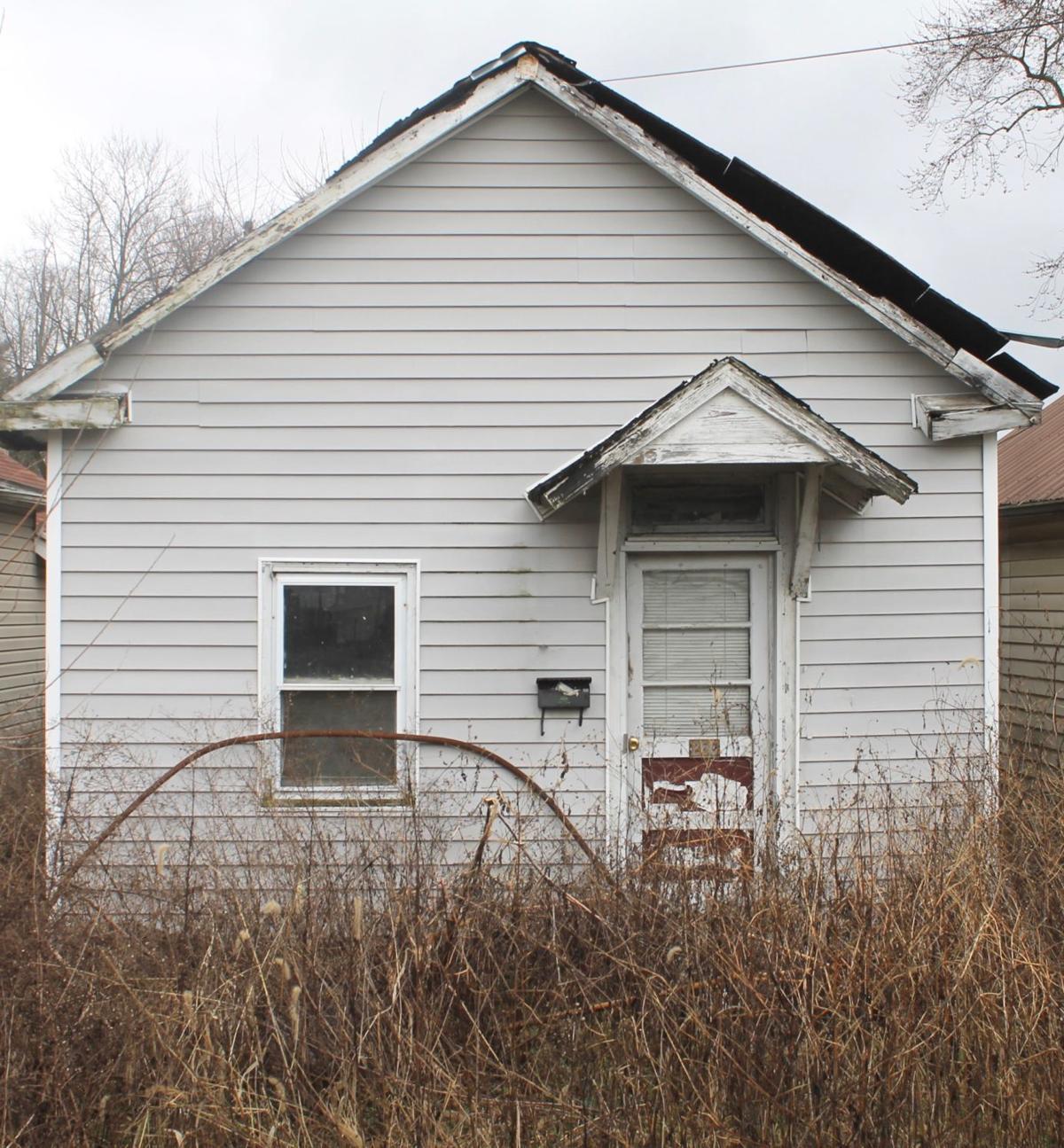 The inside of this vacant home had a partially caved in roof and a completely caved in floor. 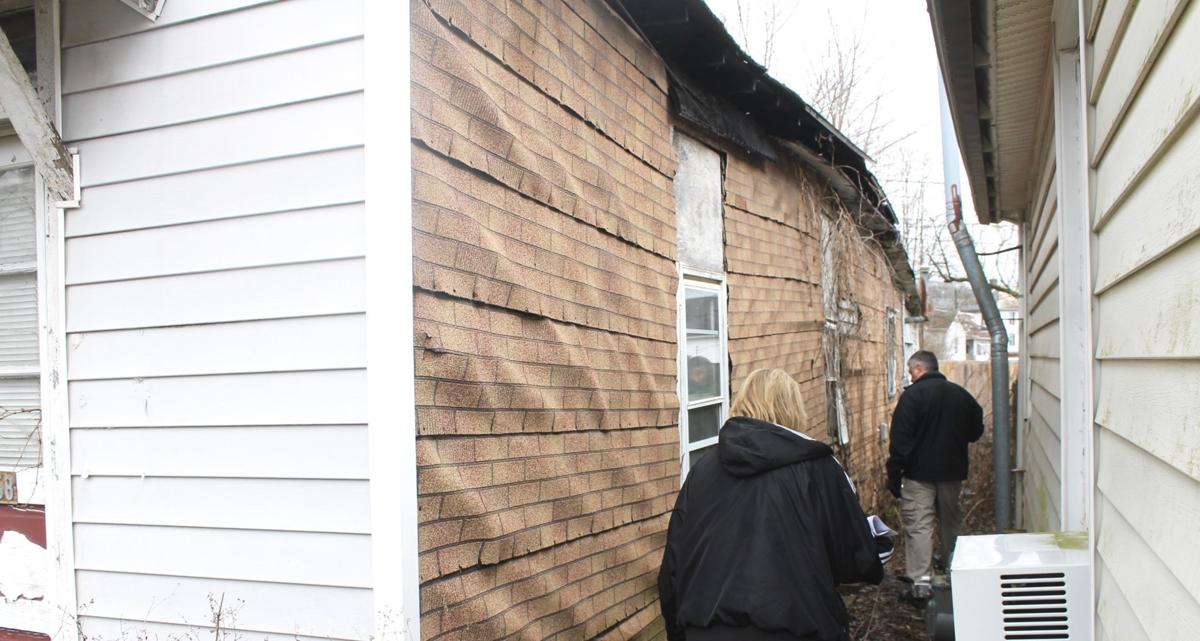 The side of that same vacant home showed that entire house had spots were it was sinking in. 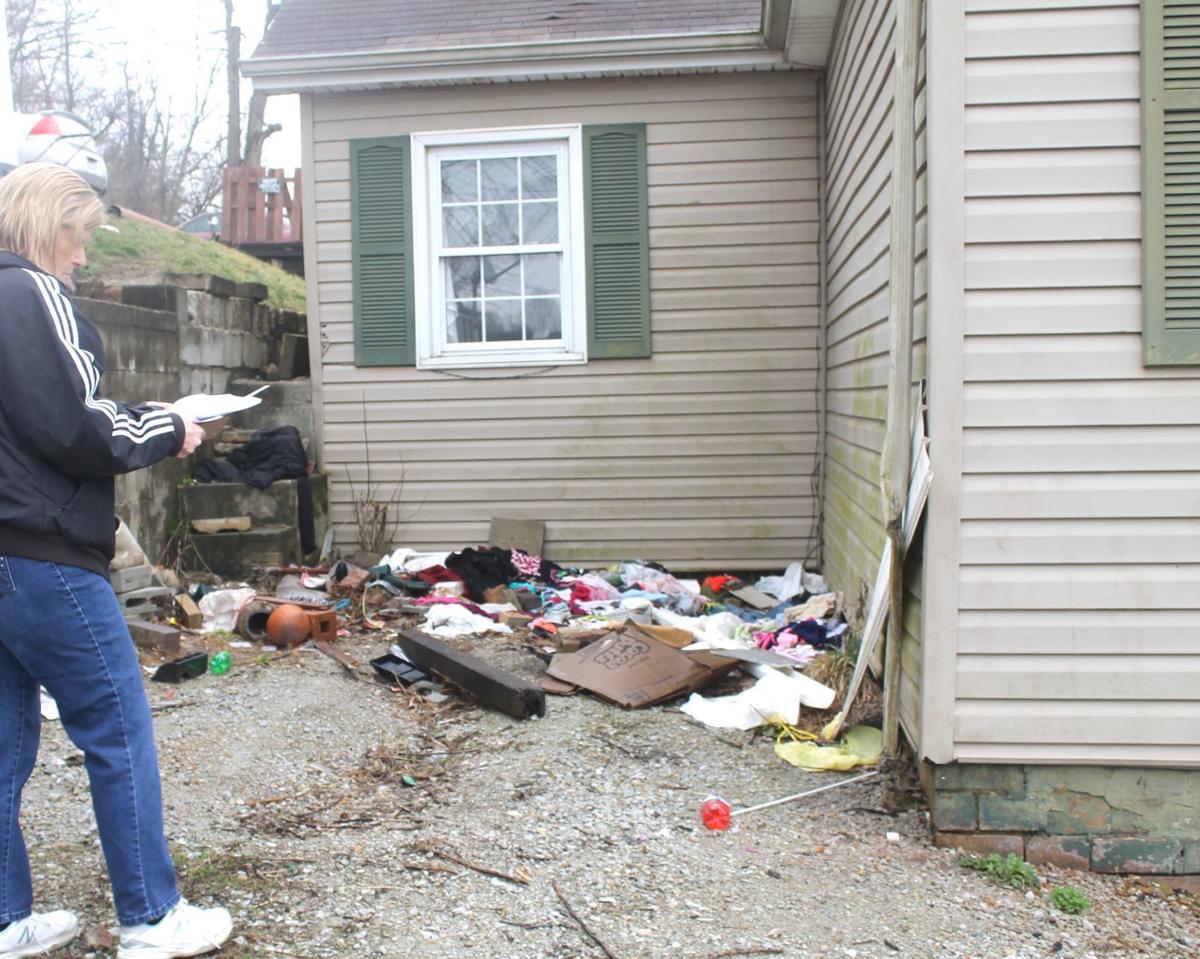 Environmental Health Tech for the Hocking County Health Department, Joann Montgomery takes notes outside of a vacant property with litter on the side of it. 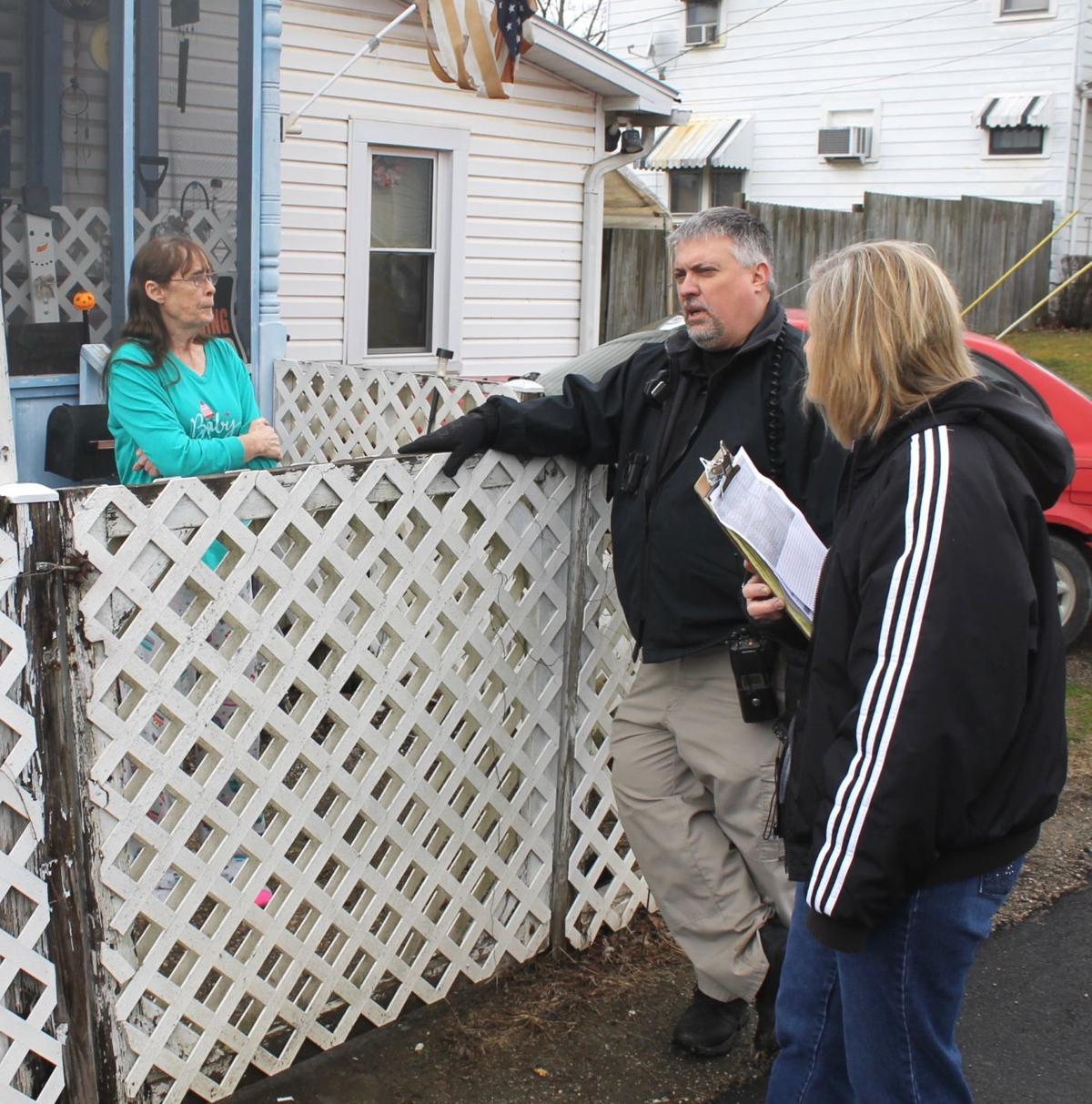 Montgomery and Posey speaking with a concerned resident. 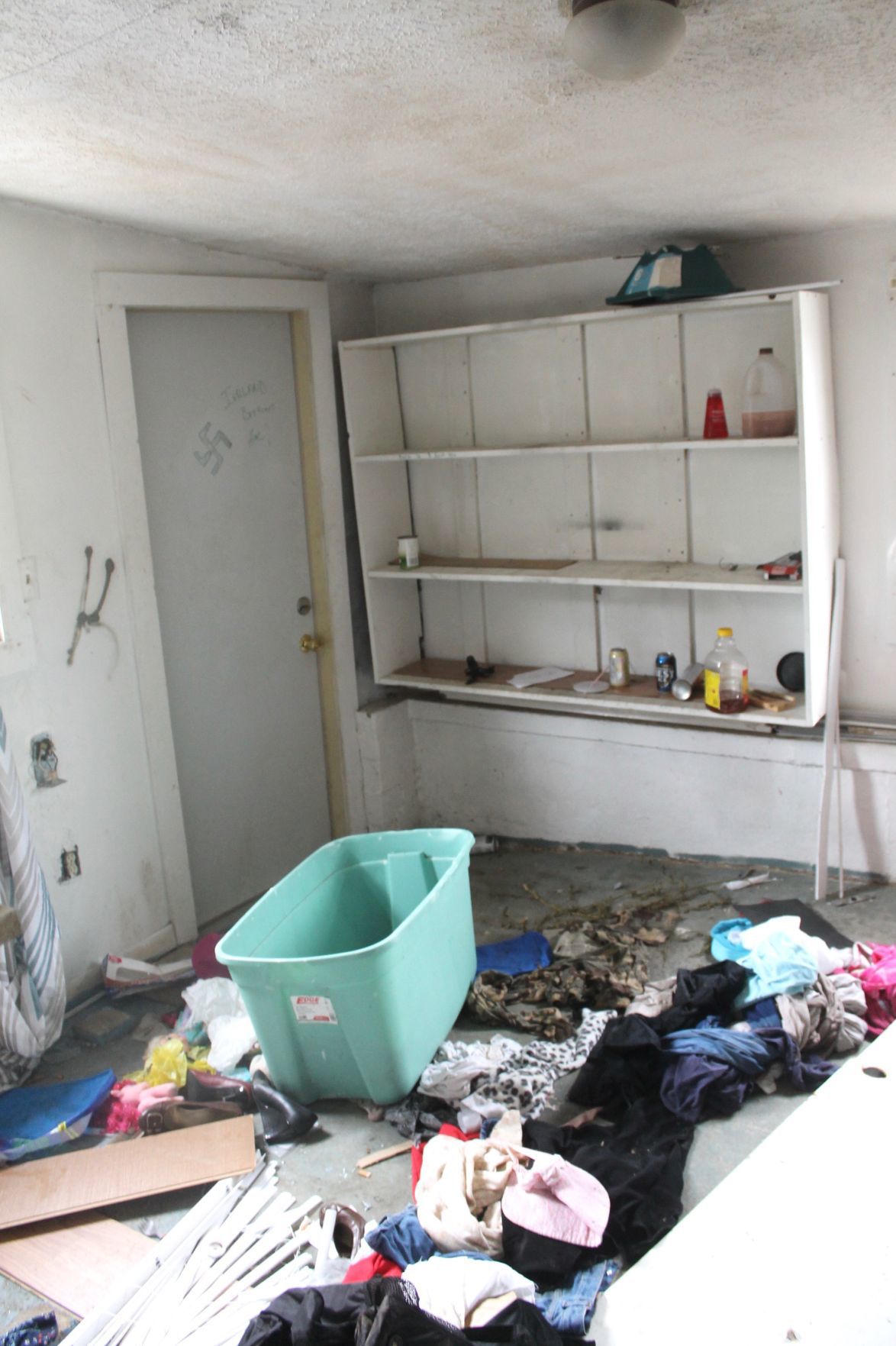 The amount of trash accumulated in this room and all over areas of this vacant house made it difficult to walk in.

City of Logan Code Enforcement Officer Joe Posey walks down the steps of a vacant home after checking to see if anybody was inside.

The inside of this vacant home had a partially caved in roof and a completely caved in floor.

The side of that same vacant home showed that entire house had spots were it was sinking in.

Environmental Health Tech for the Hocking County Health Department, Joann Montgomery takes notes outside of a vacant property with litter on the side of it.

Montgomery and Posey speaking with a concerned resident.

The amount of trash accumulated in this room and all over areas of this vacant house made it difficult to walk in.

LOGAN — Caved-in floors, a syringe on the outside of a home and trash piling up in backyards — these are all things that City of Logan Code Enforcement Officer Joe Posey described as normal while strolling through the City of Logan.

A reporter from the Logan Daily News had the opportunity to go on a ride along with Posey on Tuesday afternoon. Joann Montgomery, environmental health tech with the Hocking County Health Department, was also there.

Montgomery’s focus throughout the afternoon was to determine whether any of the properties presented any health concerns.

Joe Posey is fairly new to Logan, as is his position. He began his job as code enforcement officer in early December. From that point until now, he said there are probably 50-60 properties in Logan that should be condemned.

A condemned home may eventually need demolished but there are other homes that are salvageable with some hard work.

If these structures have occupants who are legally allowed to be there, Posey may issue them a notice of violation and a letter will almost always go to the property owner as well, if it is known.

However, first Posey knocks on doors to describe what the issue is, whether it be trash in the yard, too many feral animals lingering around the premises or that the occupancy is running off of a generator.

After he rides around the city with a list in hand of homes neighbors have made complaints about and buildings Posey has noticed need attention, he heads back to his desk to write out violations that are detailed and specific to each case.

“If there is a bunch of trash in your yard, I am going to issue a notice of violation and there will probably be some fines associated with it,” said Posey. “But if you actually bring the property into compliance by the date on the letter, we will reduce the fines drastically.”

He elaborated that another policy he and members of the code enforcement committee are attempting to implement is that if a person does not clean up in the amount of time allotted, a city cleaning crew will show up and clean it while charging an hourly rate.

On Tuesday, Posey’s focus was mainly on one street. This street will not be named in the story but the conditions of just some of the homes are as follows:

The exterior for this home was not horrid but articles of clothing and other litter were piling up on the outside.

Before the house could be entered, Posey radioed in assistance from Logan Police Officers Carl Stump and Ryan Culbertson to clear it.

Once inside, it was evident that people had been squatting there. Each room was filled with more clothes and more litter making it difficult to walk in some rooms. But the inside structure appeared to be stable.

While still inside, Montgomery and Posey discussed whether or not the home was fixable or should be demolished.

“There is a threshold in our current property maintenance code that says if the clean up and repair is equal to or more than 100 percent of the home’s value, that is when you directly go to a demolition order,” Posey said.

In the middle of this dark home, Montgomery also discussed how unhealthy living conditions can be corrected if the person who is causing them has mental health issues.

Montgomery noted there are programs that may house or check up on individuals or if they are older, adult protective services may be able to help.

She also talked about the issue of rental homes and how some property owners are not checking in on their properties.

“A lot of the landlords are local but if they are getting money out of the renter, they don’t step foot on the property,” remarked Montgomery.

Coming up to this home, several cats could be seen roaming the front yard. It appeared that maybe someone lived there but when Posey knocked on the front door there was no answer.

A structure fire happened in the back of the home quite some time ago and there was damage to the roof that was still evident.

Posey and Montgomery did not enter this home but Posey collected numerous pictures of the structure for his notes and for when he has to write a possible violation.

Approaching the next stop, a woman came out of her home to speak with Posey. She told him that she had noticed people coming out of a couple vacant residences on the street that people are not supposed to be inhabiting.

The front entrance of the home was difficult to reach as weeds and small trees grew throughout the yard.

It was probably for the best after taking a peek from a side window to find that the floor had completely caved in to the basement.

The outer appearance was no better; the roof had a gaping hole and the entire structure was severely misshapen.

Montgomery made her way to the side of the house from the backyard and spotted a syringe laying right next to the property.

It was evident that this home needed demolished based off what Posey had stated previously about repairs not meeting or exceeding the cost of the property.

Posey shared a concern of what would happen if this structure caught on fire and first responders were required to enter.

“It is one thing if they are going into a structure to save somebody but they would just be risking their lives to put out an empty building,” commented Posey.

The next couple homes Posey went to had legal occupants living in them but trash was filling up the front porch of one and the backyard of another.

In both situations, someone answered the door. He told both that there had been complaints and he would have to take pictures of the property.

He then warned them of the violation notice that they would receive about the issue and how they had to discard the unwanted items legally.

The places visited on Tuesday were all stopped at because Posey received a complaint from neighbors, but he mentioned that it does not require a complaint for him to issue a violation if he notices a property not abiding by city code.

John Stran is a reporter for the Logan Daily News.