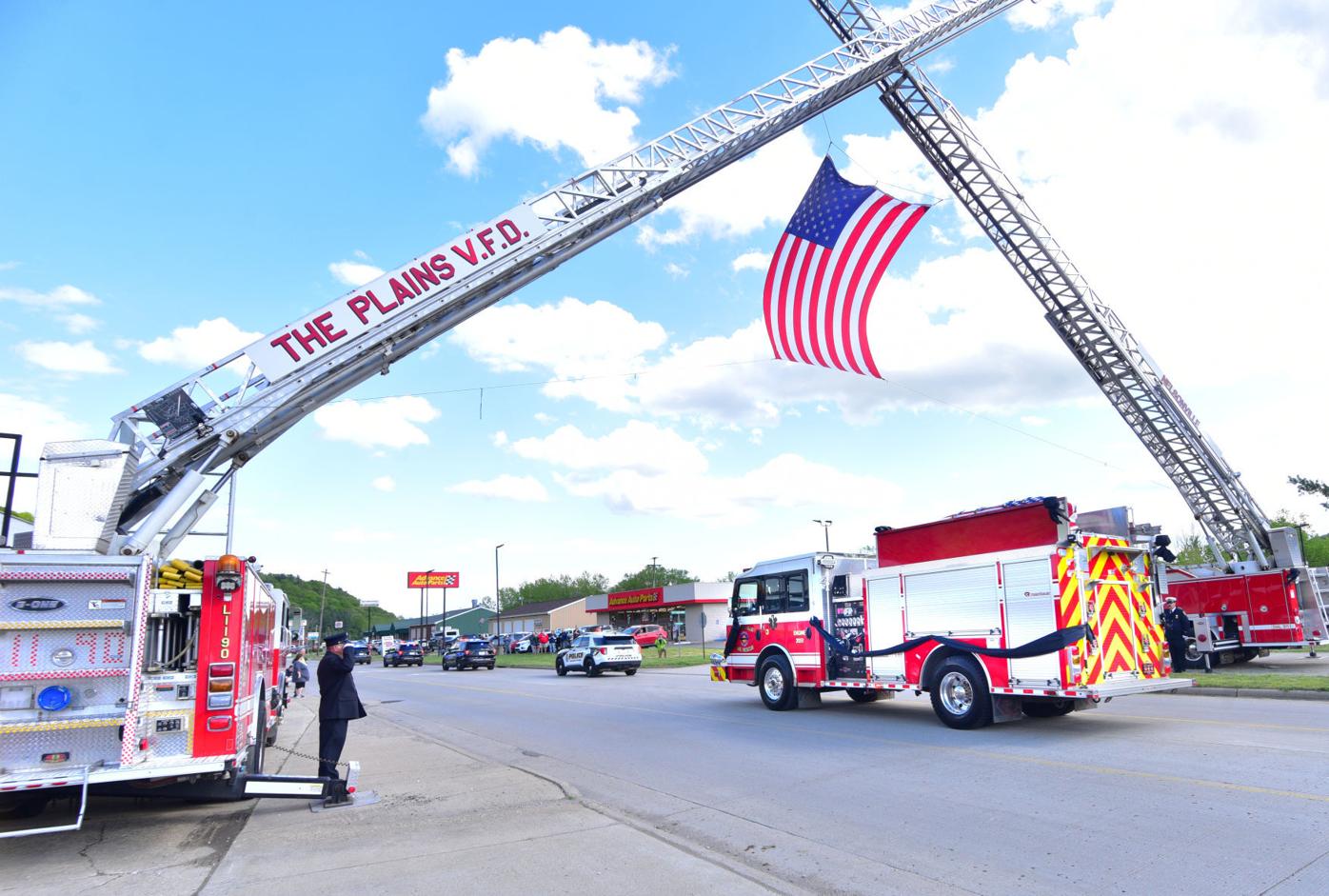 Ladder trucks from The Plains and Nelsonville Fire Departments form a arch and carry a flag for the procession of Jeff Armes. The fire engine pictured here carries Armes’ body. 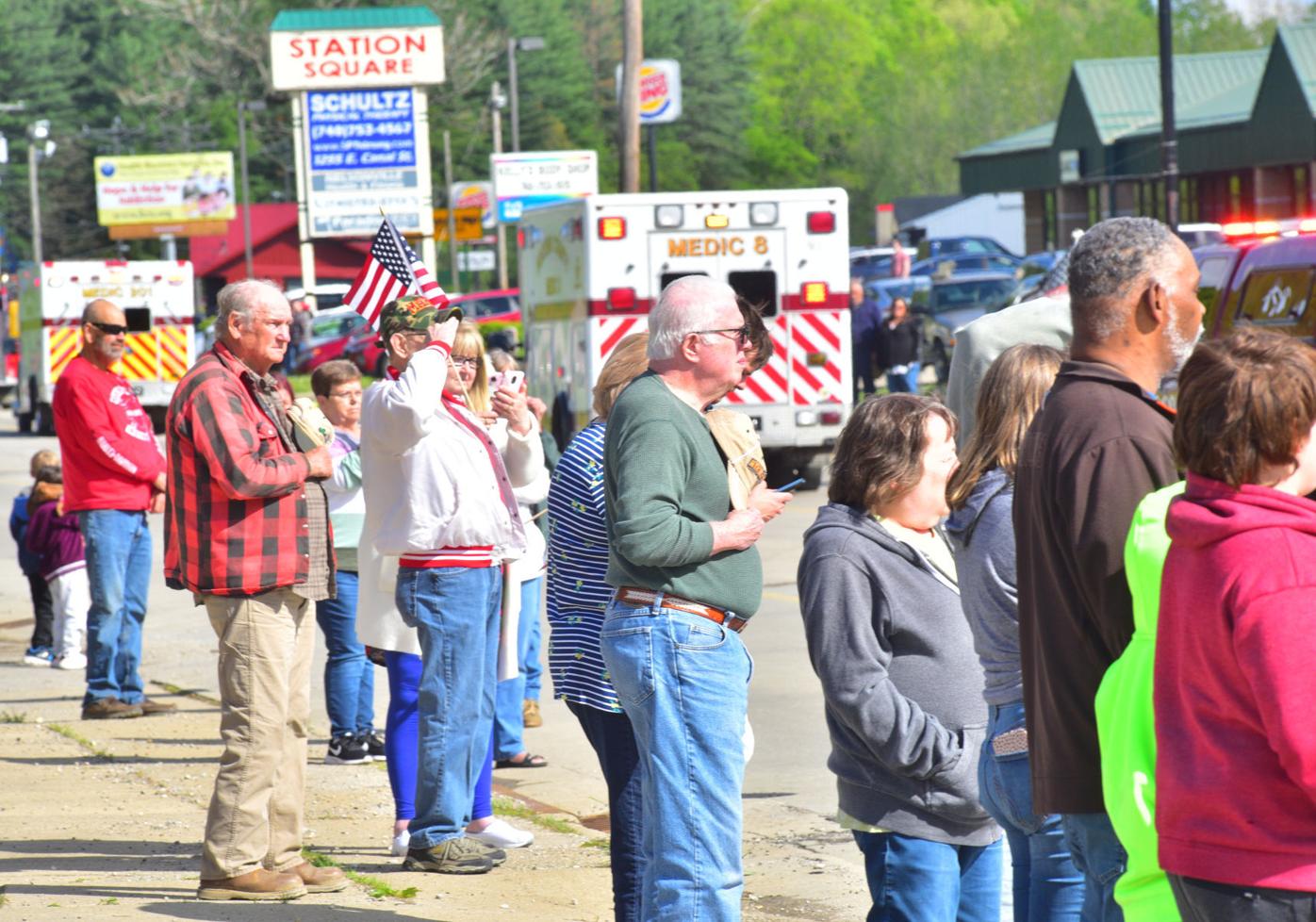 Crowds gather on Canal Street to gave a gesture of respect for the fallen firefighter. 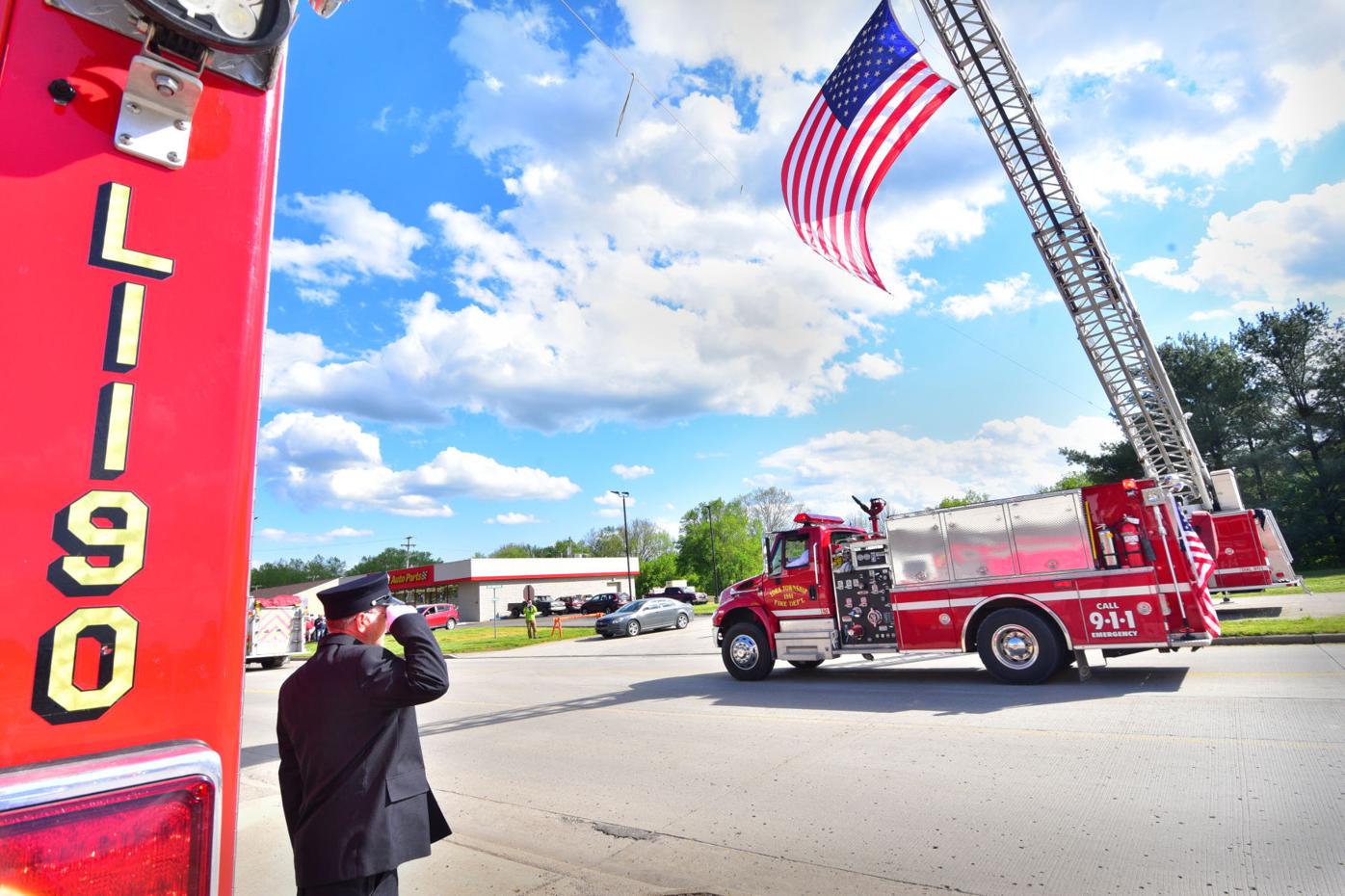 Chuck West, from The Plains Fire Department, salutes as the long line of vehicles pass by.

Ladder trucks from The Plains and Nelsonville Fire Departments form a arch and carry a flag for the procession of Jeff Armes. The fire engine pictured here carries Armes’ body.

Crowds gather on Canal Street to gave a gesture of respect for the fallen firefighter.

Chuck West, from The Plains Fire Department, salutes as the long line of vehicles pass by.

Hundreds of Nelsonville residents and first responders from across the state gathered on Friday at Greenlawn Cemetery to pay respects to Jeff Armes, a senior firefighter who died during a fire last weekend.

Well over a hundred vehicles, many of which were first responder units, proceeded from Robert’s Funeral Home in Logan to Greenlawn Cemetery in Nelsonville, where Armes was laid to rest.

An honor band played bagpipes and drums as members of the Nelsonville Division of Fire carried Armes from the back of a fire engine to his final resting place. First responders, many tearful, formed ranks and saluted the casket containing Armes’ body as it was carried to the grave. The family was also given flags and Armes’ firefighting helmet.

First responders from dozens of departments, including all Athens County first responders, Columbus, Lancaster, Marietta, the Ohio Fire Marshals and a lengthy list of other departments were in attendance.

Nelsonville Division of Fire Chief Harry Barber told The Athens Messenger that Armes was more than a firefighter to him — he was a friend.

“Jeff, for 10 years, was by my side,” Barber said to The Messenger. “He was my go-to guy, my right-hand man — whatever I needed, whatever it is, I handed it to him and made it work. Not only employee, but a friend. We were friends before we worked together.”

Barber said the fire division is seeing an outpouring of support from first responders because it is a “family.”

“That’s what the job is — it’s sort of a way of life – it’s a family,” Barber said. “Everybody here, we’re brothers and sisters. We fight together, we believe and cry together, as you just saw today.”

Scott Frank, Nelsonville city manager, said he was grateful for the response from the first responder community.

“The outpouring of support from area fire departments and law enforcement agencies was astounding,” Frank said over text. “We are extremely grateful for all of them.”

Frank said Armes will be remembered for his character.

“Jeff will be forever missed and remembered as a family man, a man of honor, and a man of character,” Frank said.

Armes collapsed and died at the scene of a structure fire Sunday, May 2, on Pleasantview Avenue, a release said. The Nelsonville Division of Fire was alerted to the fire there around 5:04 p.m.

“It’s basically one big brotherhood,” Gretz said. “And everybody comes together to support the Nelsonville fire department at a time of loss for our brother.”

Dozens of Nelsonville residents also gathered alongside old State Route 33, where they watched the miles-long procession through town. Many waved American flags or thin red flags, which are meant to show support for firefighters.

One onlooker, Erin Nuber, 45, of Nelsonville, said she came out to support her community — and Armes. Although she did not know him personally, she said she knows the fire division has always served Nelsonville and the school district.

“I’m just here to pay my respects,” Nuber said. “The fire department has done so much for the community and school.”

Another Nelsonville resident, Tammy Conley, said she knew Armes’ family and that his death was a loss for the city.

She added she wanted to show support to Armes’ family.

“It’s his parents,” Conley said. “So the parents know it’s not — he didn’t die for no reason. He’s got to be celebrated.

Armes was born on Oct. 13, 1982, in Athens, he was the son of Norris “Gene” Eugene and Karen Armes, a Nelsonville Division of Fire post on Facebook said. Jeff is also survived by his wife, Lezlee Armes and children Ayden and Teylar Armes.

In a statement on Facebook, The Nelsonville Division of Fire thanked the other first responders and Nelsonville residents that came to the procession and funeral.

“Thank you to everyone for all their thoughts, prayers, and support since Sunday,” the Facebook post said. “Nelsonville and the Hocking Valley has once again shown why this is a great place to live by honoring this great man.”