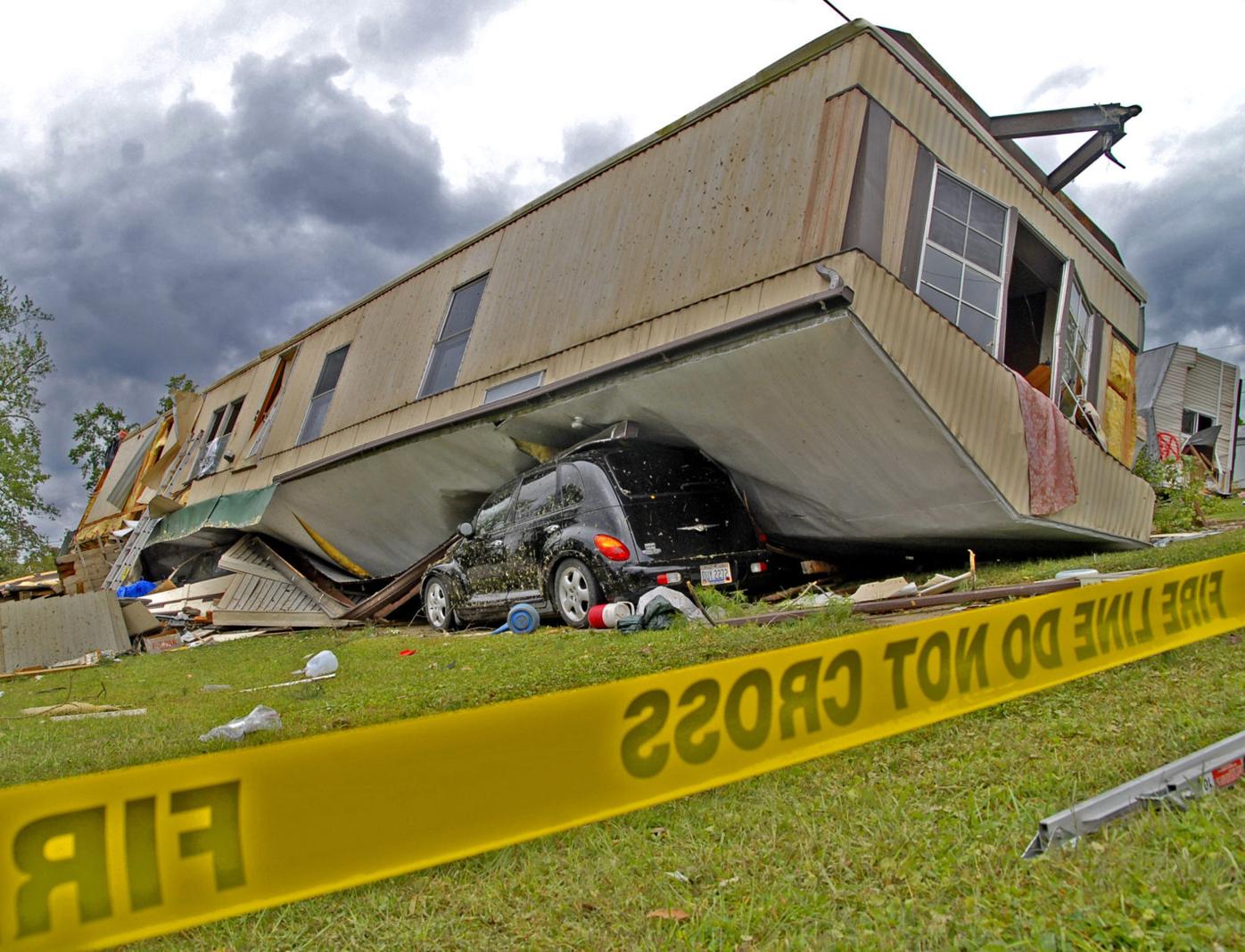 A residence on McDonald Street in The Plains was turned near perfectly upside down during the storm. 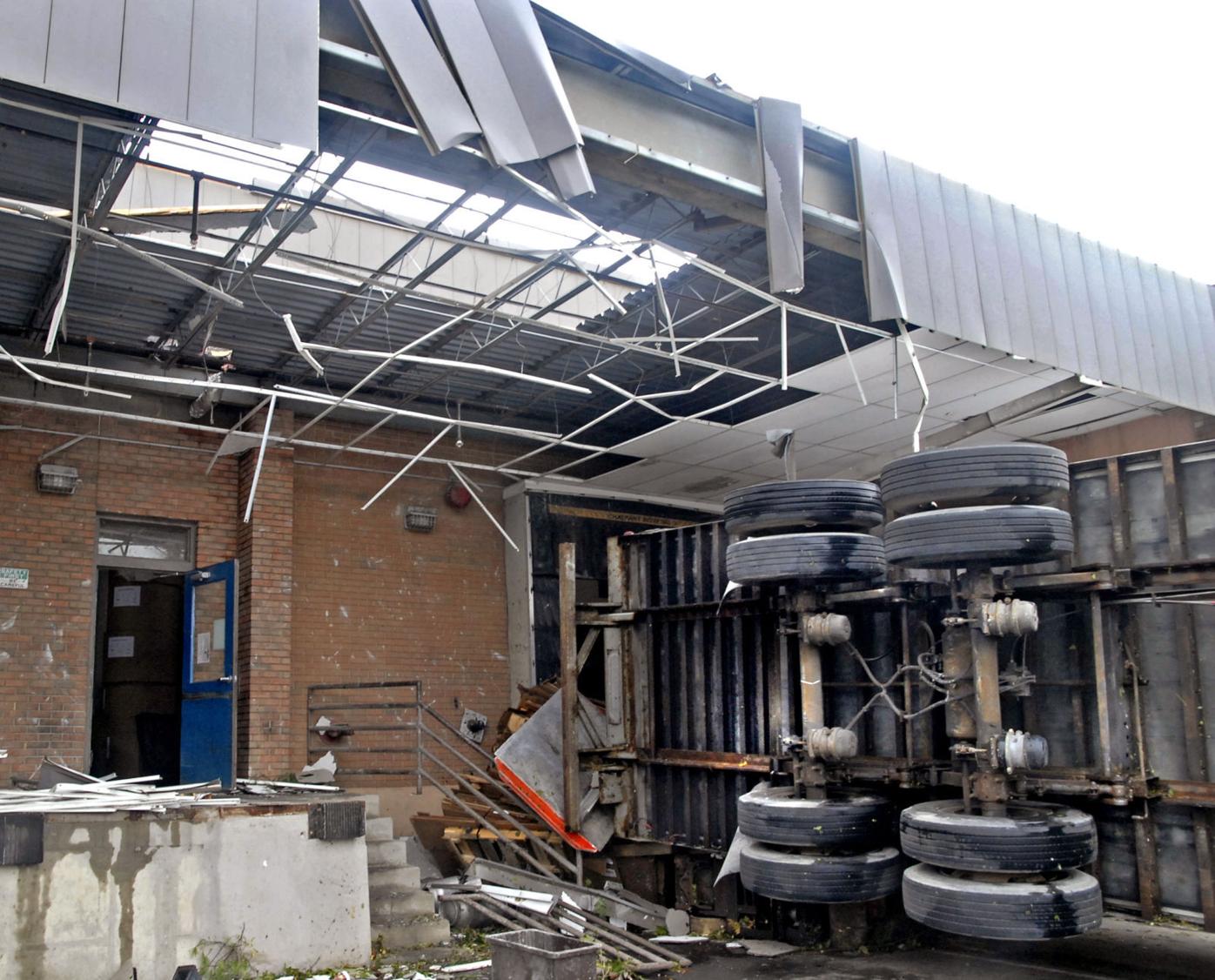 The loading dock at the Athens Messenger building sustained major damage during the storm.

A residence on McDonald Street in The Plains was turned near perfectly upside down during the storm.

The loading dock at the Athens Messenger building sustained major damage during the storm.

Memories shared of the 2010 “tornado,” as it is now known, depict apocalyptic sights — manufactured homes flipped like pancakes, livestock soaring away on the straight-line winds — but for most individuals, memories seem to center on the people they interacted with during that night and subsequent clean-up efforts where the community helped each other rebuild.

That night was a typical night, according to those that lived it. Longtime page designer and graphic artist Mary Jolley was in The Messenger building in The Plains when the storm hit, ripping away the roof over the printing press.

“My husband got a hold of me, and the storm had also hit my house, a tree fell and smashed our porch,” she remembered. “My car was also smashed, so he came and got me. When we were in The Plains, it was like a scene from a movie happening in real time. You had to be careful driving, because you could see the lines sizzling...there were house trailers turned upside down, trees, trampolines in random places. I just wanted to see my kids, because they rode the storm out in the basement of the house.”

Meanwhile, then-staff writer Joe Higgins was calling off his typical Thursday basketball plans to rush back to work.

Cell service around the area was strained, if there was any to be had, as folks called loved ones and checked in on their homesteads and jobs. Student athletes on the Athens High School soccer team were pictured on the front of The Messenger texting, calling, crying and consoling one-another as they attempted to grasp how widespread the damage had been as they sheltered within the high school.

Another story detailed the plight of Jeff and Cheryl Higgins, whose Autotech Service Center on East State Street, appeared “to bear almost the entire brunt of the funnel cloud that touched down,” while also dealing with damage to their home in The Plains.

“As the Higginses, their relatives, friends and workers gathered outside the couple’s towing and auto repair business Thursday night, one sentiment could be heard time and again: ‘Thank God it was after hours.’”

Jolley said she was working on designing that Friday’s edition of The Messenger when a post on Facebook alerted her to the possibility of bad weather.

“This was a typical day — there was no pre-warning of a storm,” she remembered. “I had seen on Facebook, one of my friends posted warning Athens residents. I said ‘what’s she talking about?’”

Jolley had just joined Facebook, which at that point was not widely used. The site had just allowed anyone over the age of 13 to join in 2007, and introduced a real-time timeline in 2009. Jolley said she remembered getting up from her desk with some coworkers and looking at the weather outside.

“We went to the door, and at that moment it was so dark — the wind had ripped the ceiling up,” she said. “It went flying past us to the break room, and we heard the glass break. So we knew then that it was serious.”

Staff writer Higgins said he will never forget the night. When he arrived in The Plains, a line of trees between The Messenger and a neighboring residential area had blown over, blocking the driveway. Water was sloshing across the floors, and no one at their desks.

“There was no lights, no power and people were scrambling, trying to find people and figure out what to do next,” he said. Higgins said he spent the first few minutes seeking one of his closest coworkers, Kathy Kerr, who at that point had been with The Messenger for 33 years in many capacities. Her husband and Associated Press Media Editors Hall of Fame member Steve Robb, had already left for home that day, having gotten his stories in earlier that day.

“I was calling anyone I could call, service was really spotty. Everybody was using their cell phones, towers were being hit by the tornado — you know, the weather was not good,” he remembered with a laugh. “The main thing I was concerned with was trying to make sure no one was injured, and getting to the point that they could get out, as the driveway was blocked by trees.”

For The Messenger team, it was a tough spot. The Friday edition had yet to be printed, and although the stories had been submitted to be placed on the pages for printing, that wasn’t yet done either. Disregarding that, the printing press was now exposed to the elements, and there was no power to the computers and other necessary equipment. Adding to the difficulties, the Messenger’s editor at the time, Angela Mitro, was out of town, and the next up the chain, then-publisher Monica Nieporte, was as well.

“Monica gave me a call, and I updated her on everything going on,” Higgins recalled. “I don’t remember the timeline, but I think she was back the next day. But she gave me the green light that night to see what we could find, get things up online, and see what we could do to get information out.”

That was just the start of a night he’ll never forget. Hand-in-hand with sports editor Kevin Wiseman, who had found his way to The Messenger from Athens High School, where he weathered the brunt of the storm, and the two traversed the county that night to get a scope of the damage, an estimate of what was lost and some idea of what the area was facing.

Jolley and Higgins recounted seeing first responders and residents gathering at the high school, where Higgins and Wiseman collected initial response information, and headed out into the county.

“We were trying to see what we could see,” he remembered. “It was dark. There was no power, so no street lights, no houses lit up. It was like a dark tunnel for the most part, but I feel like the damage was mostly continuous damage, with spots of heavy damage. There was debris everywhere, no matter where you looked.”

He noted that electrical lines across Route 33 were down, as well as tree limbs, restricting the route to a single lane — a scene that played out similarly on county and township roads.

“That was one thing — we didn’t see a lot of people out in the county. It added to the darkness — there just wasn’t anybody out,” he said. “In 2010, cell phones were — not because everybody didn’t have one — but then, people were still getting used to living their lives on them. But we had enough for the story, and we had to get something online, so we headed back to town.”

Wiseman’s brother, a student at Ohio University at the time, offered space at his apartment to the two journalists. Higgins began to write his story, and Wiseman was attempting to take stock of what had occurred.

“It was probably 8:30-9 p.m., and Monica (the publisher) called, and told us that we had to go to Logan and get the paper out,” he remembered. The two drove to the office of the Logan Daily News, where The Messenger was produced for the next few weeks, and got to work.

“We got the paper put together, and were still trying to figure out how to get it out in a physical way,” he remembered. A deal was struck with a printing press in Marysville, Ohio, and the Friday paper was marked by coverage of the previous days’ storm.

“The paper was a different type of paper, and I remember the paper just felt different,” Higgins mused.

During this, Higgins had yet to go home, which had been in the path of the storm. His wife, then pregnant, had been in Shade visiting friends Thursday evening, and neither made it home until Friday.

“I think I came to The Messenger first, got an idea of the general plan, and then went home as I knew my house was in the area that had been hit,” he said.

Roads from both directions to his house were still blocked, and Higgins ended up walking a half mile to his house. The house was fine, his motorcycle as well. However, his wife’s car was smashed. The night will live in infamy in many memories, including Joe Higgins’s.

“It was wild,” Higgins said. “Fortunately — you know, I was so happy that Kevin was OK, because that could have been really bad with the press box crashing down moments after he got out. In fact, no one was reported killed in the county, but there were some injuries.”

For Higgins, Jolley and Wiseman, the stories they heard, the things they experienced and the people they met still characterize their memories.

“Overall, what could have been and what actually was, we were fortunate,” Higgins said.

Gallery: A night not to be forgotten