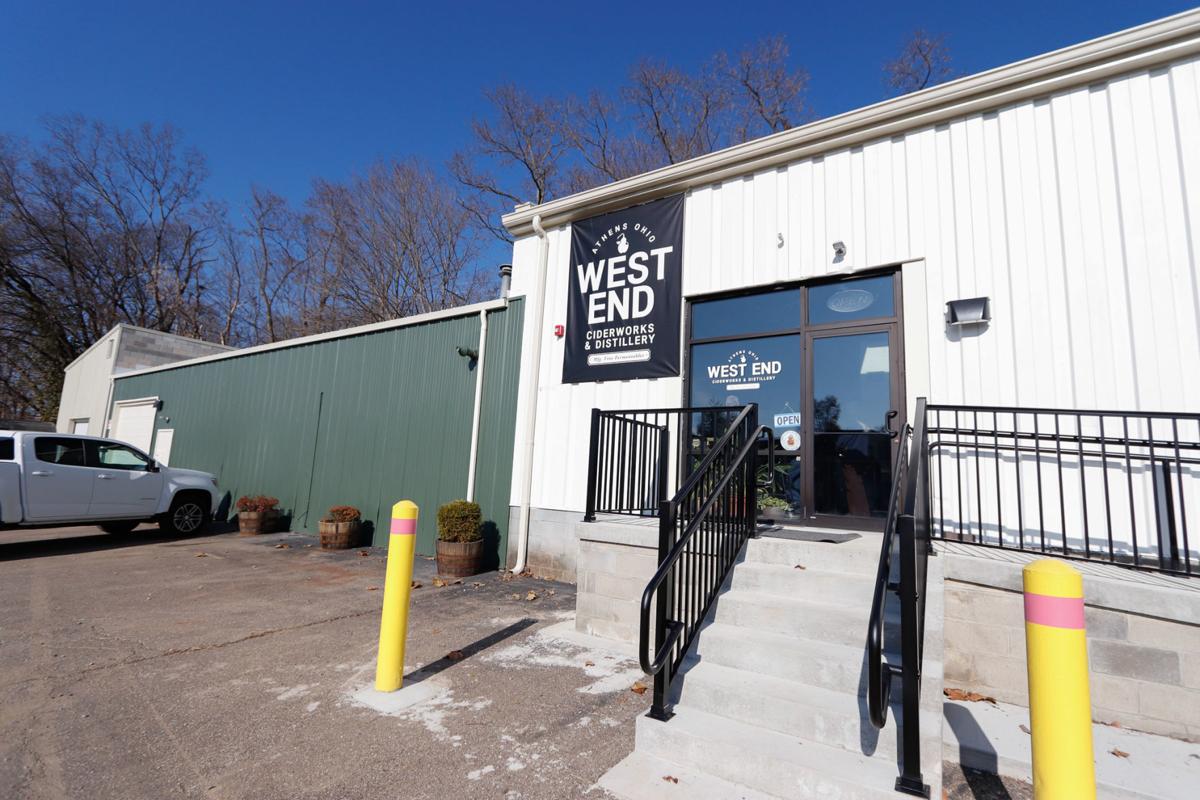 The West End Distillery is located at 237 W. State St., but its entrance is off a small drive connecting to Shafer Street. 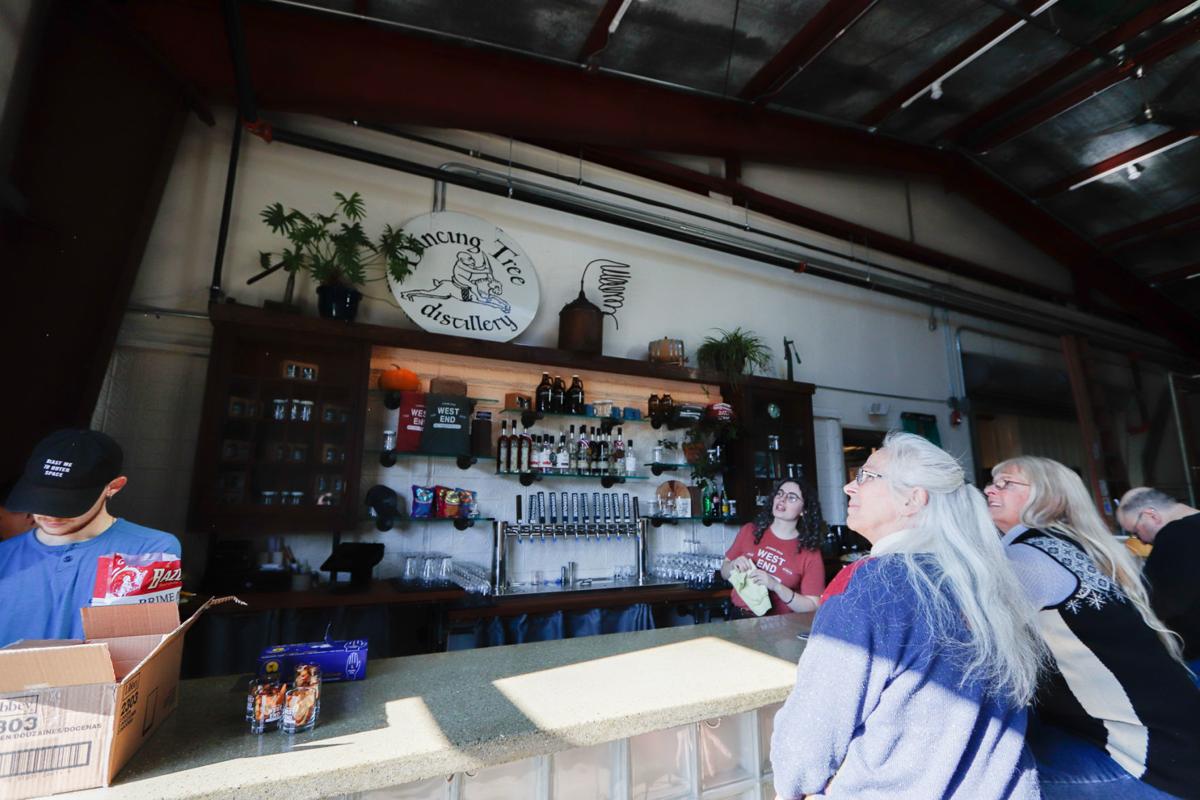 The bar of the Distillery is smaller than the Ciderhouse’s, and carries only West End Distillery products. 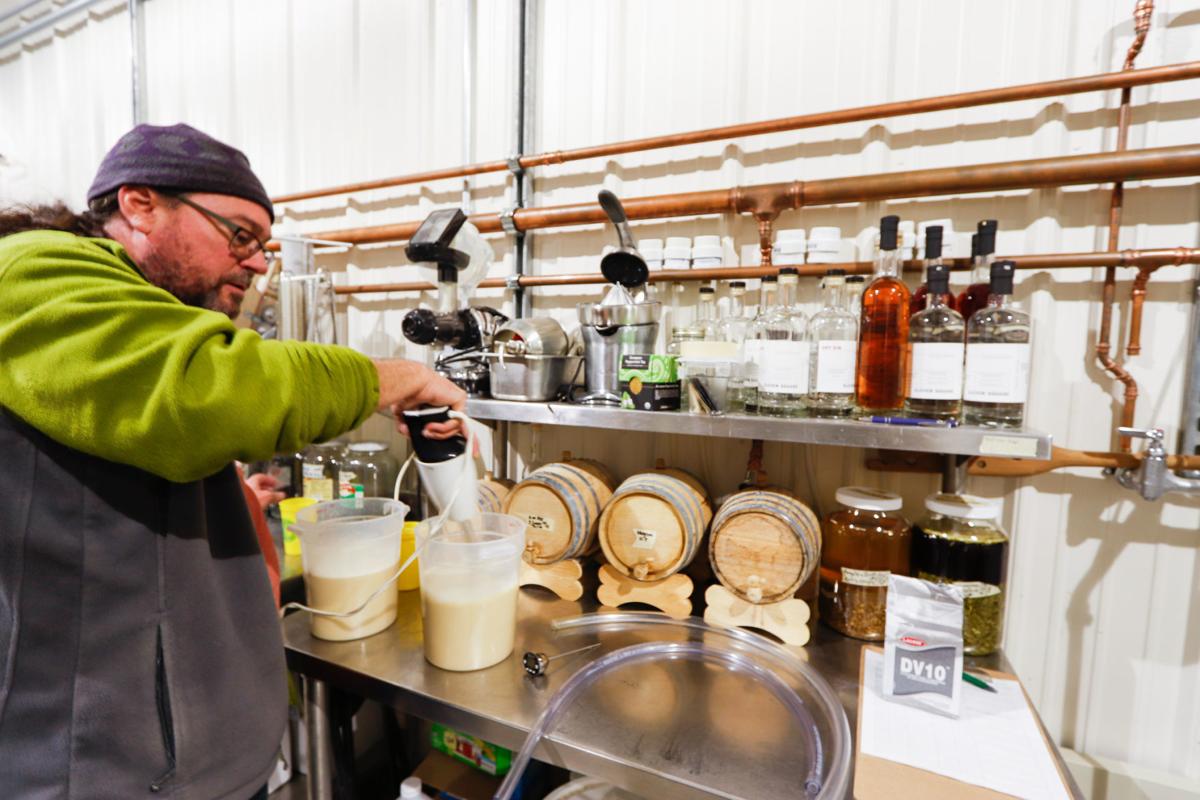 Kelly Sauber, owner of West End Distillery and Ciderworks, is seen here hydrating yeast for a new 500 gallon batch of cider he had pressed the day before. 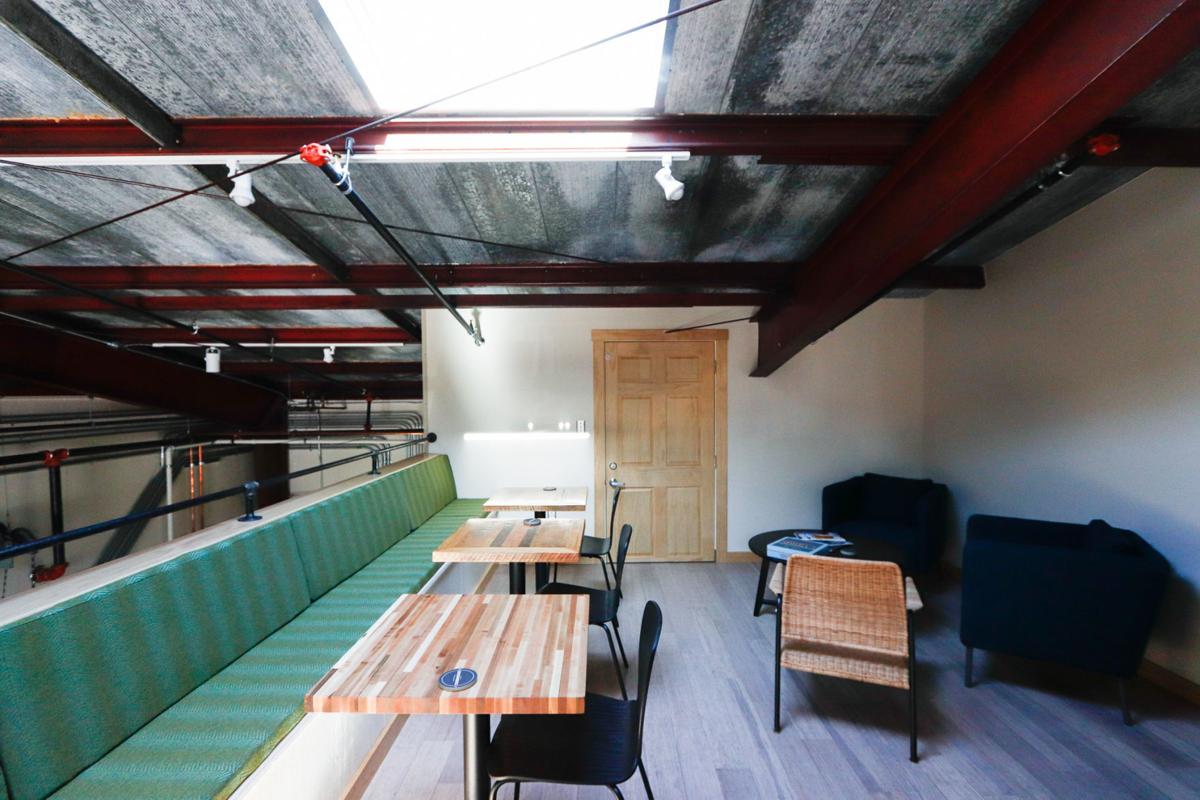 A circular staircase leads upstairs to the loft area, which could serve as a meeting space or hangout area. 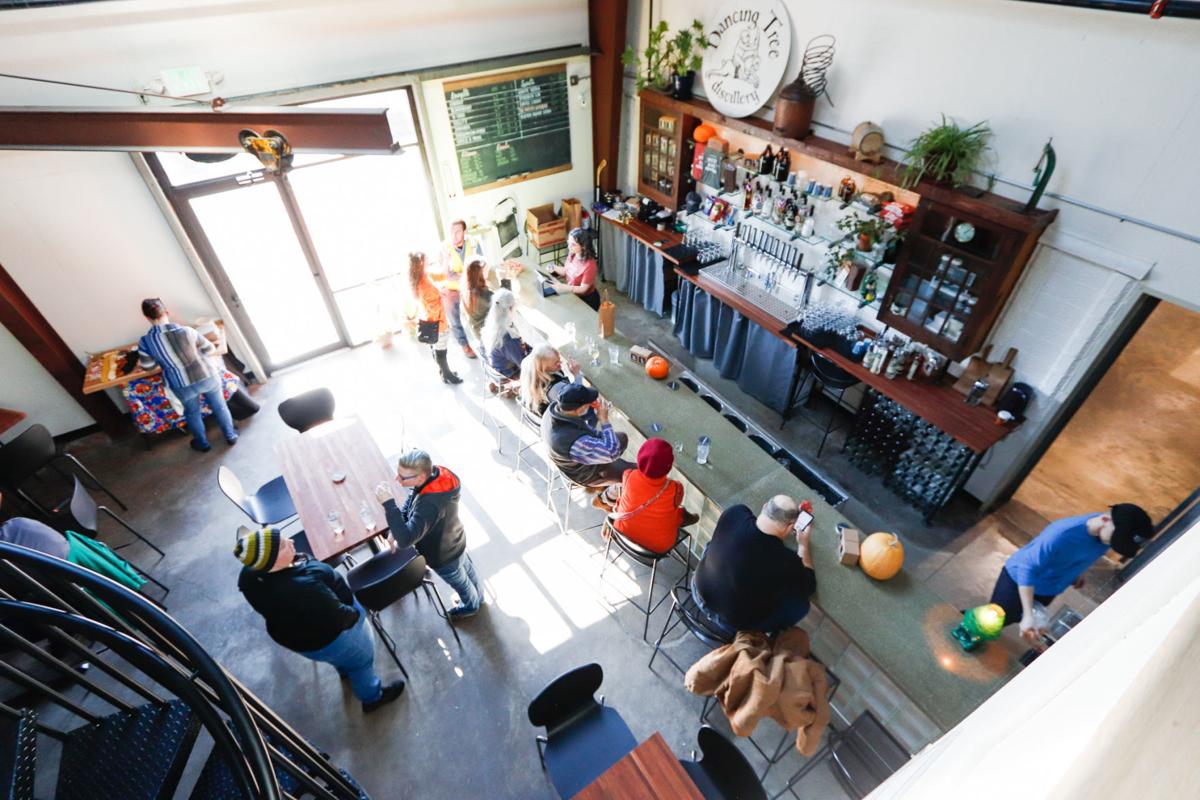 Downstairs, the tasting room was full of potential patrons. 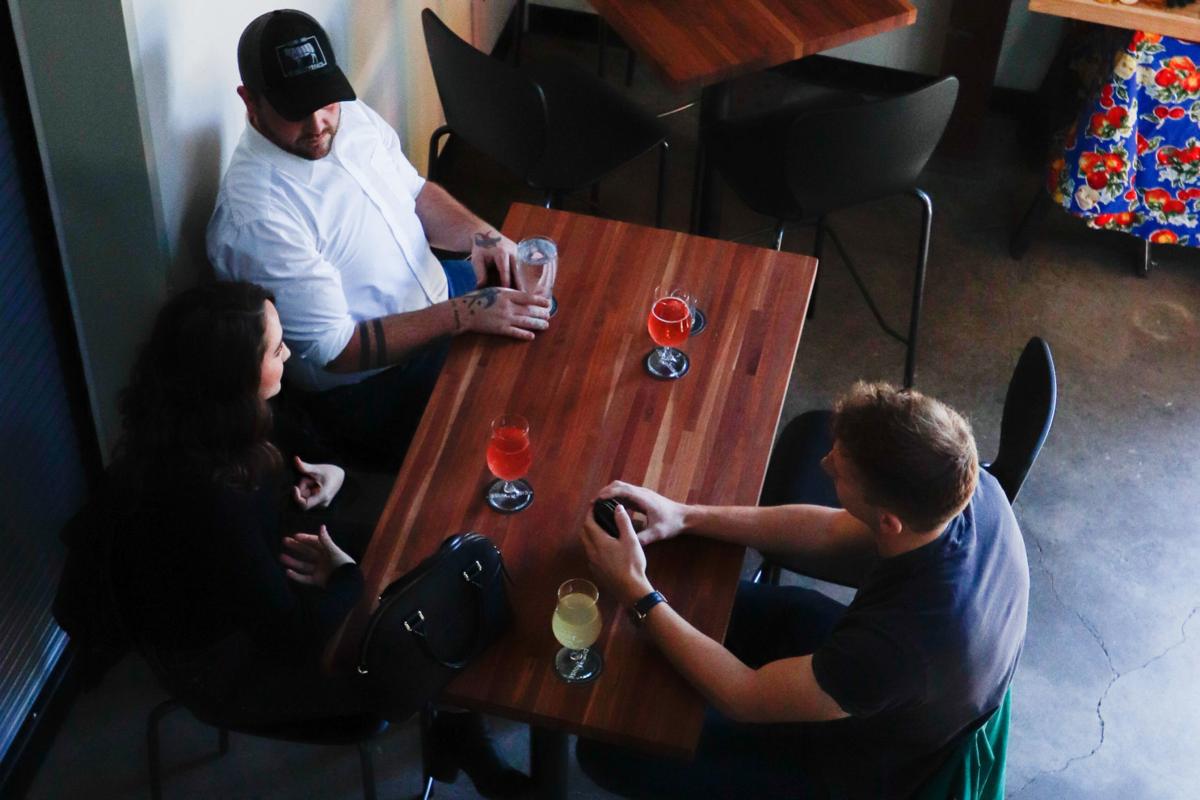 These patrons were drinking glasses of cider. 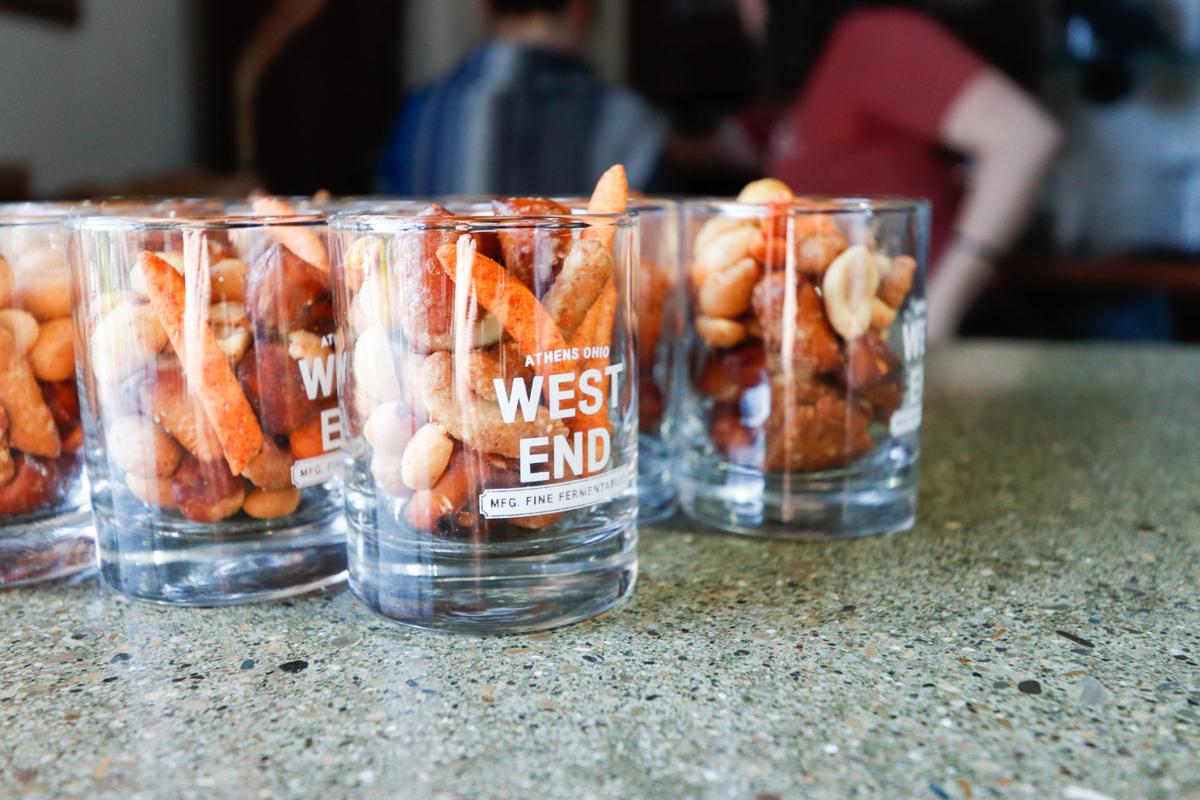 The West End Distillery is located at 237 W. State St., but its entrance is off a small drive connecting to Shafer Street.

The bar of the Distillery is smaller than the Ciderhouse’s, and carries only West End Distillery products.

Kelly Sauber, owner of West End Distillery and Ciderworks, is seen here hydrating yeast for a new 500 gallon batch of cider he had pressed the day before.

A circular staircase leads upstairs to the loft area, which could serve as a meeting space or hangout area.

Downstairs, the tasting room was full of potential patrons.

These patrons were drinking glasses of cider.

Note: This story appears in the Tuesday, Nov. 19 newspaper on Page A1.

In a plain building located just off of Shafer Street, owners of the West Side Ciderhouse and Distillery have been slowly growing new roots in the Athens West Side community.

That’s because Kelly Sauber and his partner, Deanna Schwartz, have moved liquor and cider production operations from Meigs County to a location next to the Ciderhouse, thus creating the West End Distillery. While Sauber has been producing his alcoholic beverages there for awhile, extensive remodeling of the location has also been underway to add to the production aspect.

Don’t be fooled, this is not just another bar. The main purpose of the location, 237 W. State St., will be production of many ciders and liquors, to be sold in take-home sizes through the tasting room portion of the Distillery location, and to supply the Ciderhouse.

The opening of the distillery also marks the beginning of the end for Fifth Element Spirits, which is the brand Sauber and Schwartz have been using to label their products, originally known as Dancing Tree Distillery. As the last of those labels are used up, new products will use the West End Distillery labels. The new title is the culmination of of Saubers old brands, as well as years of work, to bring the production facility closer to the Ciderhouse.

One aspect of the Distillery still to come involves signage — the street address of 237 W. State St., while accurate, is misleading. Parking and the building’s entrance are found via a small drive extending from North Shafer Street across from the end of West Washington Street. Sauber said he has permanent signage in the works to help guide customers, and is currently working on easements to install such signage.

The production area and tasting room are only part of the space in the new building — another portion has been tentatively tapped for a coffee house and tea room. Those plans are not finalized, but “it’s an option,” Sauber said. He called the initiative a project of Schwartz, and noted the company has been advertising for the position on social media.

Hours for the tasting room are limited in these early days. Currently, customers can visit between 3-8 p.m. on Fridays, and 1-8 p.m. on Saturdays.

Sauber also is hoping that the Distillery space will allow for him to accommodate events — he said people have inquired about using the Ciderhouse as an event space, such as for graduation or holiday parties, but there isn’t enough space to host events there while continue normal service.

To that end, Sadie Meade was hired as the new event coordinator. She has worked for Sauber and Schwartz for two years at the Ciderhouse, but has moved to the Distillery when it soft-opened a month ago as a bartender and event coordinator. As one of four employees of the couple, Meade said she’s excited for her part in the business promoting products that she “loves.”

The Distillery’s tasting room has restrictions on what it can offer customers — when it comes to mead, ciders and wine, customers can drink as much as they’d like. However, liquor is restricted to four quarter ounce samples in a 24-hour time period.

“We don’t have our full liquor license right now, so we’re here to let you taste all the spirits that we’ve made, with a consideration to bring some home,” Meade explained. “We also have all of these cider and mead offerings that we can serve full pours of, and I want to encourage people to see it as a meeting space.”

Although the Distillery will expand the West End Ciderhouse’s brand beyond the cozy, hole-in-the-wall location it’s occupied for years, nothing in the Ciderhouse itself will change.

“The heart of the question is really, ‘what is this (new location),’ and we’re a distillery and a winery, we’re open for tours, and production is our main focus,” Sauber said. “But we have a great tasting room where you can taste all our products and get whatever you want to-go, and when you’re here, look around and say ‘this is great, I have a 45-person party I need space for,’ and possibly down the road it may morph into having a coffee house here as well.”

The tasting room offers two floors for folks to sit together — Meade noted that those who call ahead would be able to reserve the second floor for business meetings, study groups or any other group meetings.

“I feel like there’s a lot of potential, and I’m excited to see how people find use for this space,” Meade said.

“I feel like there’s a lot of potential, and I’m excited to see how people find use for this space."