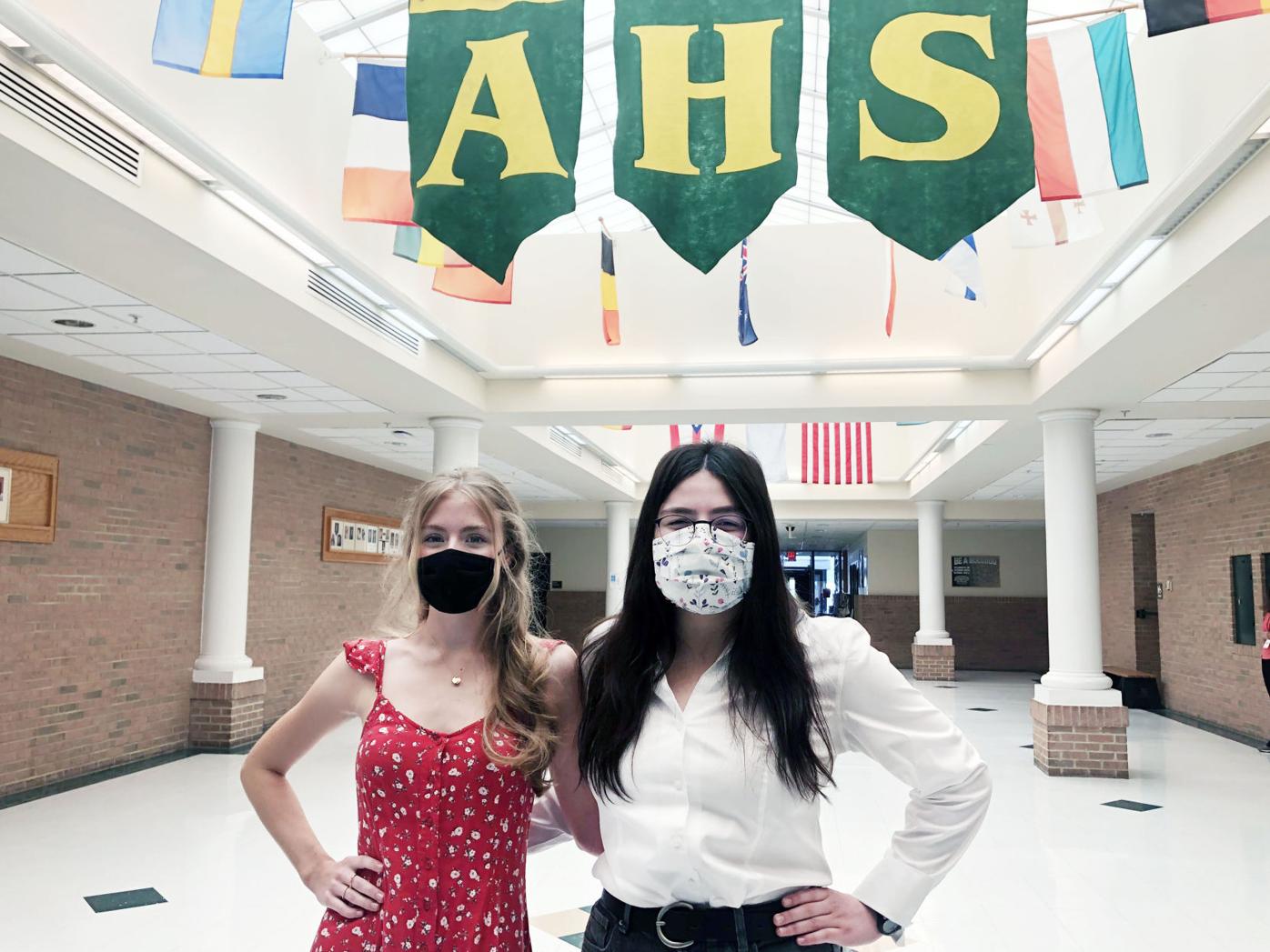 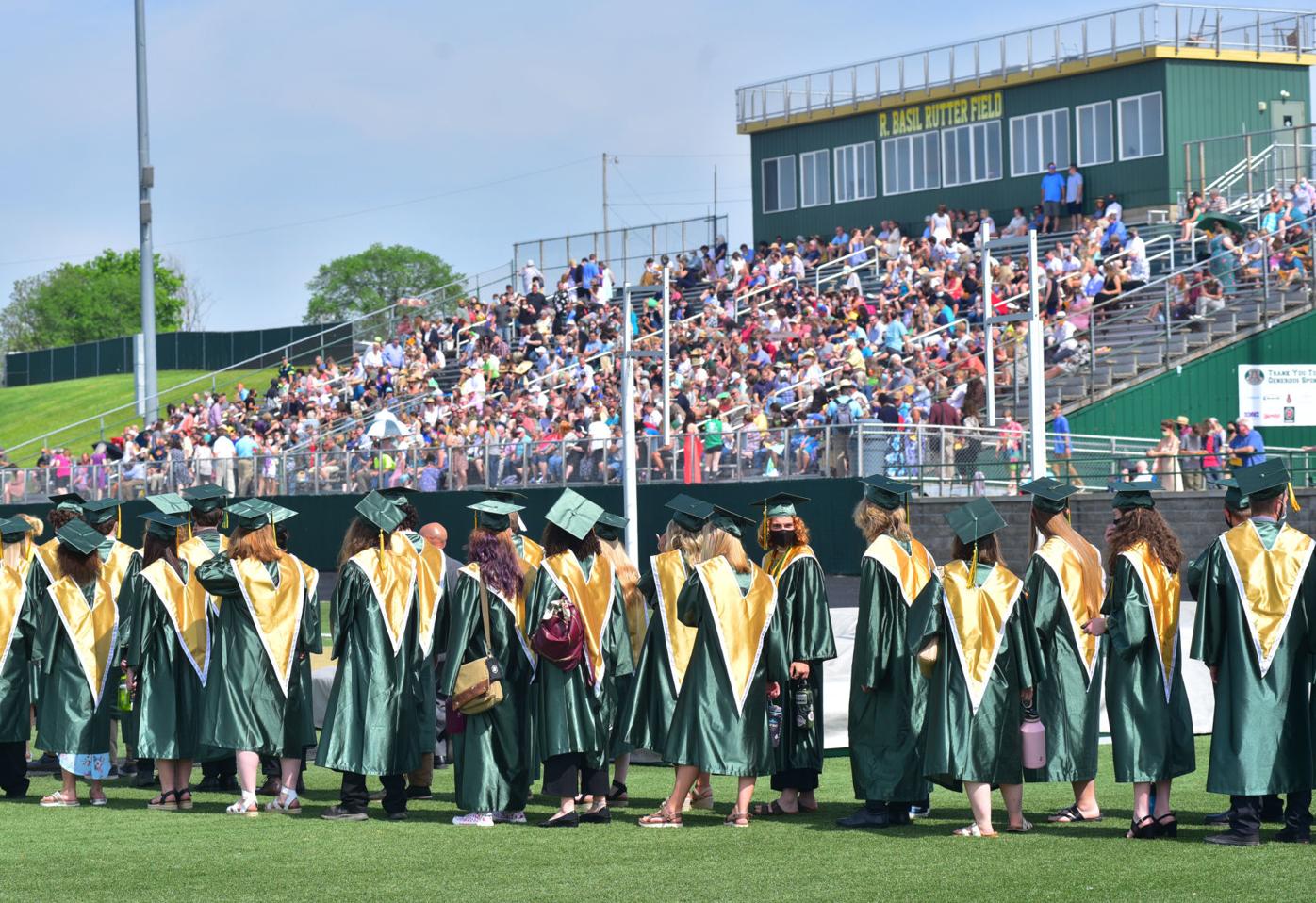 It was a beautiful outdoor commencement celebration at the Joe Burrow Stadium at Athens High School on Saturday. The audience was bigger this year because more seating was available at the outdoor ceremony, allowing more people to celebrate the class of 2021.

It was a beautiful outdoor commencement celebration at the Joe Burrow Stadium at Athens High School on Saturday. The audience was bigger this year because more seating was available at the outdoor ceremony, allowing more people to celebrate the class of 2021.

On Saturday afternoon, young Athenians walked across the field at Joe Burrow Stadium, received their diplomas and officially graduated from Athens High School. Among the graduates were Valedictorian Lourdes Benecia Courreges and Salutatorian Emerson Elliott, who said goodbye to AHS and hello to bright futures and bigger cities.

Having grown up in Athens, both of them are excited for the changes that living in a bigger city will bring. Lourdes in particular can’t wait to head to Chicago.

“That’s going to be so much fun,” Lourdes said. “Chicago’s going to be a little strange, being such a big city and coming from Athens, but I’m really looking forward to meeting new people.”

Lourdes credited her family as being an inspiration for her success, having seen her older siblings do well academically and her parents, both Ohio University professors, who moved here from Argentina.

“My parents came to the United States from a different county, so I can’t be scared of going to Chicago,” she said.

Both Lourdes and Emerson are looking forward to the academic settings they will be entering into.

“I’m excited about the core curriculum at Columbia, it’s a very rigorous liberal arts education that’s focused on the humanities and classics,” Emerson said, stating that the “spirit of academia” at both of their chosen universities makes her happy.

“There’s an infinite amount of human knowledge out there. I want to learn and grow and absorb as much as I can from the greatest literary and academic minds that have ever existed,” she said.

Lourdes agreed, stating that she chose the University of Chicago for its comprehensive linguistics program. In fact for both graduates, campus life was a secondary consideration towards their college decision, having chosen their universities without ever having stepped foot on campus due to the COVID-19 pandemic.

“They really offered me an approach to linguistics that I just couldn’t turn away.”

Lourdes, who first gained experience with linguistics by attending a camp, isn’t sure about the exact path that she would like to pursue with linguistics but states that there is a multitude of possibilities, including being a translator or a teacher.

“There are people that go out and reclaim or save languages that are dying out. There are so many really cool things that I want to do...linguistics is just a stepping stone,” Lourdes said.

Though she only just graduated from high school, Lourdes seems to have a headstart on her career ambitions, already speaking Spanish and French. She is also currently teaching herself Russian and knows a bit of Latin and Greek.

Emerson also has big dreams for her future.

“My ultimate goals are to continue my education to the point where I can make social change. Where I can achieve and understand what’s going on in the world and my place to contribute,” she said.

Emerson credits growing up in Athens for her interest in making social change, having seen some of the issues the area faces.

“I felt like Athens does a good job of integrating a lot of different social classes and backgrounds in an environment that is focused on education that kind of allowed us to see where your education can take you,” Emerson said.

They also were both inspired by pursuing outside interests, a concept they suggest to any underclassman looking to find their passion.

“Develop skills and interest outside of school and outside of a set curriculum,” Emerson said.

Both young people seem primed to take on their college careers, having already taken multiple Ohio University and AP classes while in high school. Thanks to those classes, the pair have been step-in-step since middle school, taking the same courses and continually challenging each other higher.

“What’s the point of trying to achieve high if you are the only one trying,” Lourdes said.

Emerson agreed, citing that they haven’t necessarily been competitive with each other, rather they’ve been encouraging.

“We’ve always helped each other out, I feel like the courses at Athens foster a sense of community, especially in AP courses. You stay with the same people,” Emerson said.

That community was certainly different for the last two years of their high school experience, thanks to the pandemic. The class of 2021 experienced their final two years of high school oftentimes behind a computer screen or a face mask. Though the pandemic protocols presented challenges, both students were happy with how the school staff handled the changes.

“I feel like our faculty took care of us and supported us during this time,” Emerson said, with both crediting the faculty at AHS as a major factor in their success. “We love our faculty.”

Having ended their high school careers on such a high note, both graduates say they are looking forward to relaxing this summer. Lourdes said she knows her next steps.

“Sleep, rest...this year has been insane,” she said with a laugh, Emerson was quick to correct Lourdes statement.

“(You mean) Make an independent study schedule and learn a new language?” Emerson asked, laughing. “Our version of relaxation may not be the typical, but it’s what we enjoy.”

The class of 2021 graduated from Athens High School on Saturday, May 22 at Joe Burrow Stadium. Photos by Messenger Photographer John Halley.