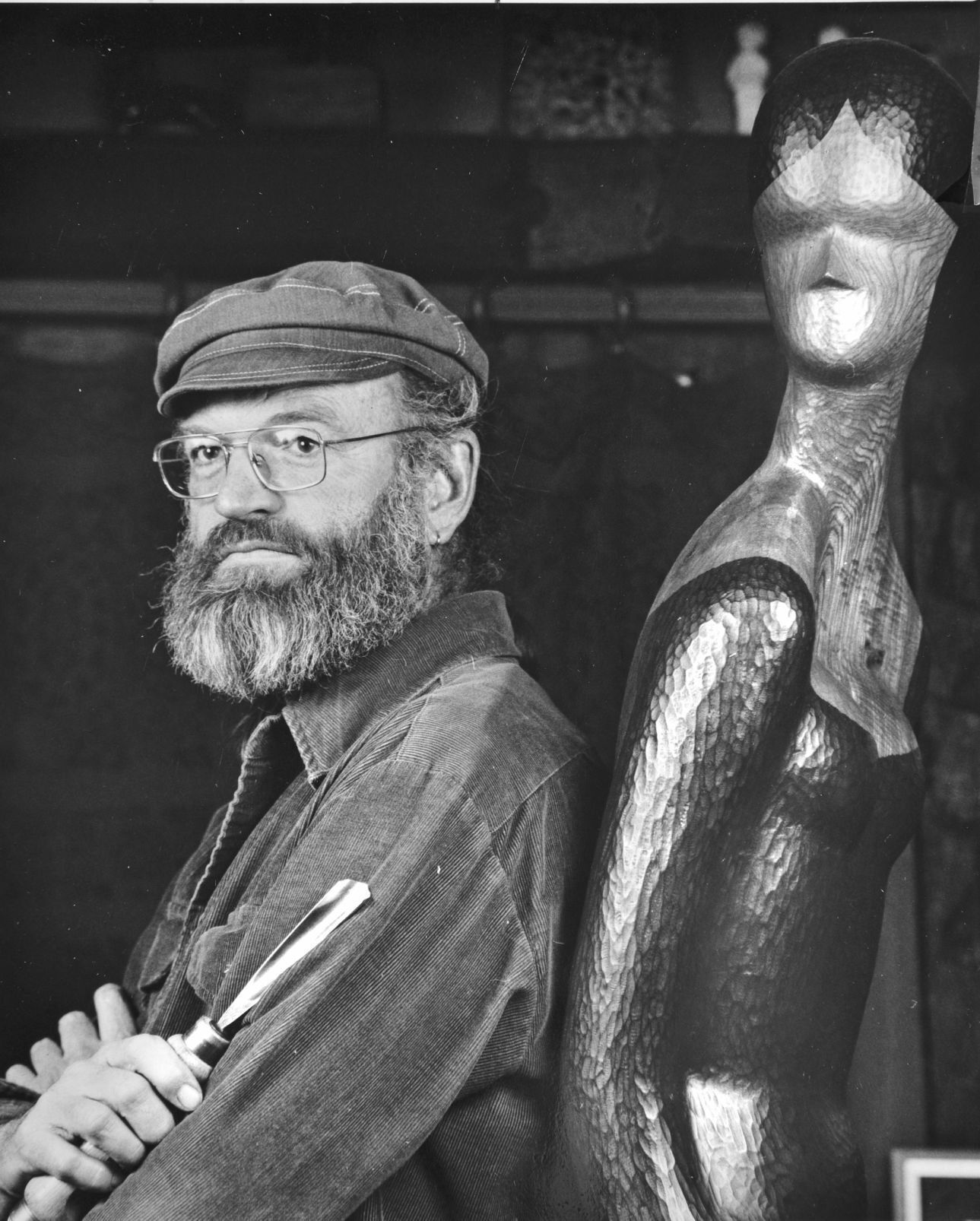 Some called him “The Cat from Coolville Ridge.” Not because he was cat-like, but because he was an artist hep-cat who started his artistic endeavors in the late 1940s and 1950s, way back when beatniks were in their glory. Let’s keep in mind that David Hostetler was a multifaceted individual who could get along well with a New York City gallery owner, an Appalachian woodman and everyone in between.

He spent many years teaching sculpture at Ohio University while at the same time producing a series of nationally known sculptures in wood and bronze. He called the series “American Woman.” He could live off the land using a team of horses and a plow or he could play drums in a jazz band. He did all these things and more as part of his life journey.

Two generations before him, the Hostetler family left the Amish orthodox community. His grandfather became an independent minister. Hostetler was born in Beach City, OH. His first introduction to art came to him during World War II, while he was in the hospital recovering from shrapnel wounds. Art therapy was utilized to help soldiers recover from trauma of war. The therapy introduced him to painting which sparked something inside Hostetler. Later he studied art at Indiana University and received a master’s degree in art at Ohio University. He soon became an instructor and later a professor at OU.

Hostetler had a great interest in the early Ohio settlers and living off the land, his Amish background added to this interest. He was inspired by the books of Louis Bromfield, who wrote about bringing a 600-acre Ohio farm back to life. In 1955, Hostetler and his family bought a farm on Coolville Ridge. (I’ll bet a cool cat like Hostetler was intrigued with the name.) He worked, and he worked, and he worked to make the farm productive, keeping cattle, pigs, chickens, and sheep. He raised hay and grain to feed the livestock. His enthusiasm and zest for life spread to his students at Ohio University. They were always on hand to help out with the chores on the farm and talk about art with their favorite professor. Please note, this was happening years before the “back to nature” movement of the late 1960s.

While all this farming and discovering his roots was going on, a spacious studio was built on his property. At this point, serious production of his American Woman series was also under way. Most of the time, wood for his sculptures was found on his own property. The early wood sculptures resembled early American folk art. The figures were painted in bright colors. Later the figures became more elongated and graceful. Later again, sculptures of polished bronze were cast from the wood figures. During this time, Hostetler’s work was being shown and sold in galleries around the nation.

To be a successful artist, one must create a quality product and be able to promote the art to the world. It takes a lot of hard work to publicize an artist’s work. One must enter countless art shows around the country, make the right contacts with the right people in the business, and speak of the work in a way to show its importance. And it helps to own your own gallery. David Hostetler could do all these things with ease. And he owned his own gallery in Nantucket, MA to boot.

One of David’s contacts in the art world was the internationally known portrait photographer, Yosuf Karsh. He spent a lifetime making the official portraits of kings and queens, presidents, and other leaders of the world. But in 1968-69, he spent a lot of his time photographing Hostetler’s sculptures. The result was a group exhibition with Hostetler’s sculptures and Karsh’s photographs.

Another contact and friend of the artist was businessman, Daniel Galbreath. He was the initiator of, in Hostetler’s words “…the most important public commission of my life.” He was speaking of the ten-foot bronze sculpture in the Trump International Hotel and Tower in New York City.

Often visual artists have a musical side to them. Hostetler was no exception. In his later years, the art studio was sometimes turned into a music club, where musicians would be invited to play and others invited to listen. David would be on drums, for the jam sessions on Coolville Ridge. They called the venue Club Dave.

There are several examples of Hostetler’s work in Athens. There is one in front of Alden Library on the Ohio University campus and another in the garden of the Zenner House on Utah Place.

If anyone has any memories or comments about David, please drop me a note. I will add it to my files. John Halley, jhalley@athensmessenger.com