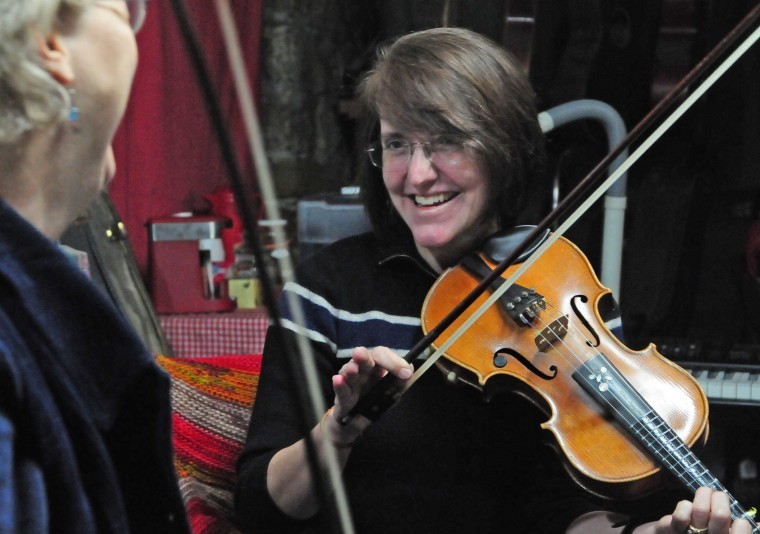 Juanita Hall, who is deaf but is an expert lip reader, laughs during her fiddle lesson with Liz Shaw. Hall has always wanted to learn to play music. 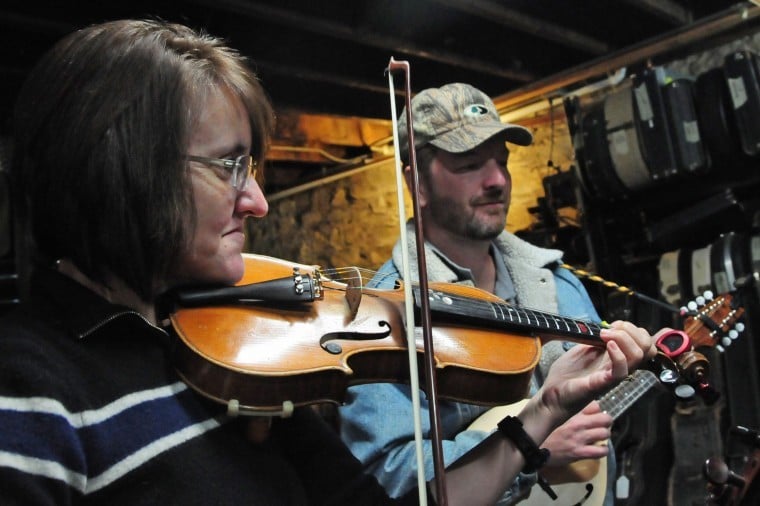 Juanita Hall, who is deaf, said she enjoys taking playing music with her husband, Greg, who plays the mandolin.

Juanita Hall, who is deaf but is an expert lip reader, laughs during her fiddle lesson with Liz Shaw. Hall has always wanted to learn to play music.

Juanita Hall, who is deaf, said she enjoys taking playing music with her husband, Greg, who plays the mandolin.

In the basement of Blue Eagle on Court Street, Liz Shaw, a fiddle instructor, helped student Juanita Hall correct her finger placement for the tune Simple Gifts. Hall’s fingers kept sliding down beyond the fret, hitting a D-sharp note instead of a D. It’s a common problem with all students, Shaw said.

“I’m picky with you because you can take it,” Shaw said to Hall with a laugh.

“It all sounds the same to me,” Hall added.

Hall is considered profoundly deaf. She hears next to nothing without her hearing aids. To her, each stroke of the bow sounds the same. She distinguishes between them by the feeling of the vibrations.

“The lower notes have a fatter, wider feel to it,” said Hall, 43, of Pageville, which is near Pomeroy. “The higher notes feel really tight. I don’t really like those.”

For the past year, Hall has been doing something she’s always wanted to do — learn to play the fiddle. Her husband Greg Hall, 45, takes lessons with her, too. He plays the mandolin.

Hall, originally from Toledo, is an anomaly in the deaf community, according to her husband — an average hearing person who is a closed captioning stenographer for broadcast television. She was almost 3 years old and already talking before her parents realized she was deaf. For as little as she can hear, which is only about 5 percent, she barely speaks with the impediment common to those with a hearing impairment. She’s also an expert lip reader.

But there are times when she gets confused, like the first time she met her mother-in-law, who speaks with a Southern drawl. The accent threw off Hall. At one point, she asked Hall a question that Hall misinterpreted as offensive. It’s a story they laugh about today.

Hall always wanted to learn to play music. She studied the fiddle for a year during her elementary school years at a deaf school. The experience earned her the nickname “Scratch” among family and friends. She also studied the piano, but she struggled. The fiddle is easier for her because it offers more visuals and physical feedback. She can feel the vibrations and see an electronic tuner at the end of her fiddle that shows her if she’s on pitch.

“I was determined to learn,” Hall said. “I’ve always said that the deaf can do anything, except hear. Don’t limit yourself; just go for it. Find a way, no matter how long it takes.”

The couple have appreciated the time spent with Shaw, who has been teaching music for about 30 years. During that time, Shaw has worked with students with Down syndrome, autism and vision impairments among other challenges. A deaf student, however, is a first.

“We just kind of blazed this trail together,” Shaw said. “I’ve never had any special training to work with people with disabilities; I think of things that will work for me and the student.”

Shaw will exaggerate some of her arm movements when teaching about how to move the bow. She’ll tap Hall’s knee to work on tempo. Hall has videotaped lessons so she can study them during practice.

“Everyone can get something out of learning music, whether it’s the conventional way or the unorthodox way,” Shaw said. “I find that music is just a wonderful way for folks with challenges to communicate back and express themselves.”

“I think Juanita is gifted musically,” Shaw continued. “That must be a really interesting place for her to be, to not be able to hear it outwardly but to hear it inwardly.”

For the first time, Hall, now a stay-at-home-mom who home-schools her two children, is learning songs by their vibrations. Simple Gifts is her favorite.

“It relaxes me,” Hall said, explaining why she likes to play. “Lip reading can be very tiring. By the end of the day, I need something to just get away, so I play the fiddle. It’s also something I can do with my husband.”