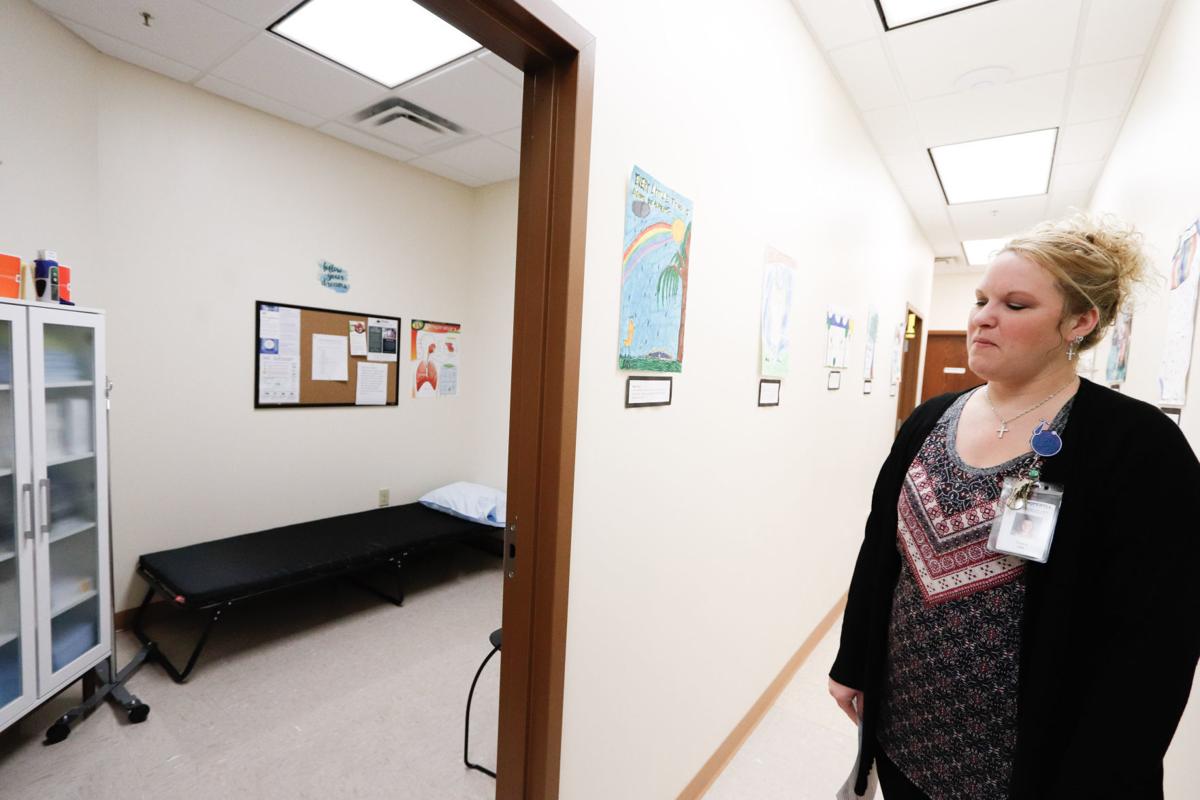 Crystal Norton-Bolin, LPN, shows one of the student care rooms — a cot allows students to lay down in a quiet, dark place if need be. 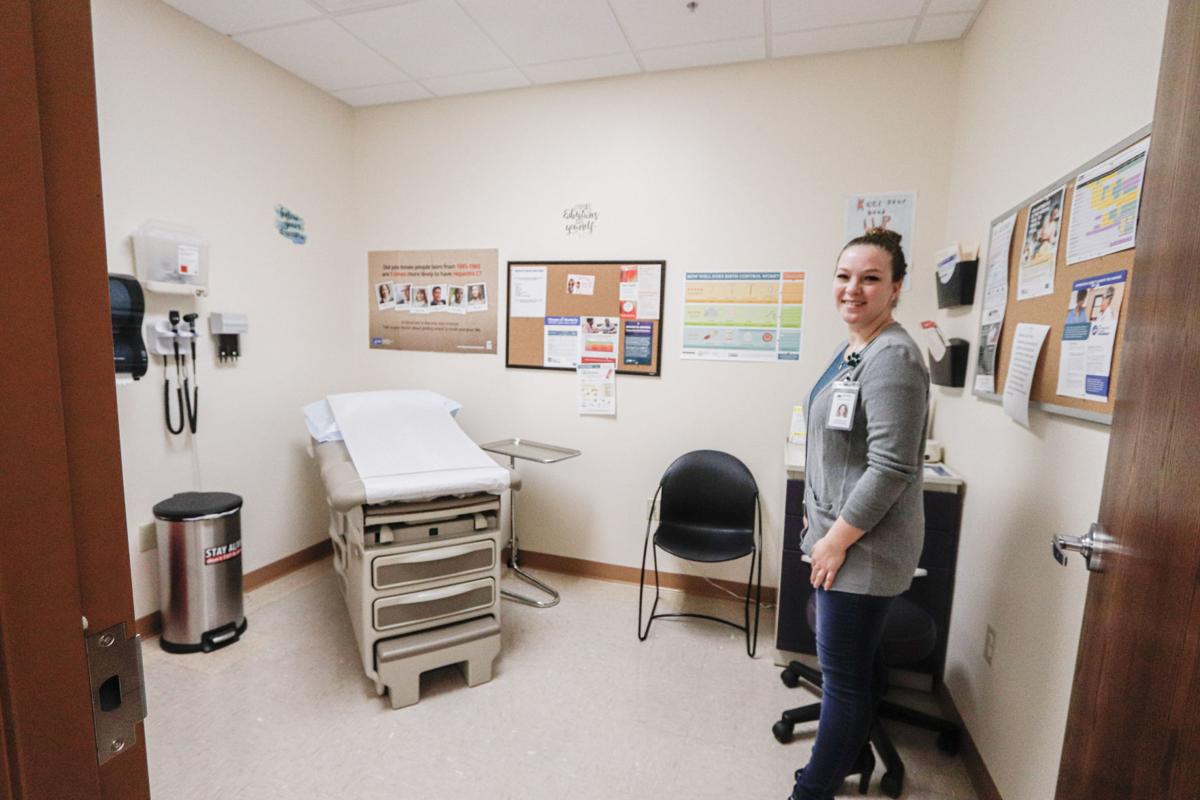 Megan Spergin, the nurse practitioner, shows one of the treatment rooms. Each of the care rooms has art work from Federal Hocking students decorating the walls with positive messages. 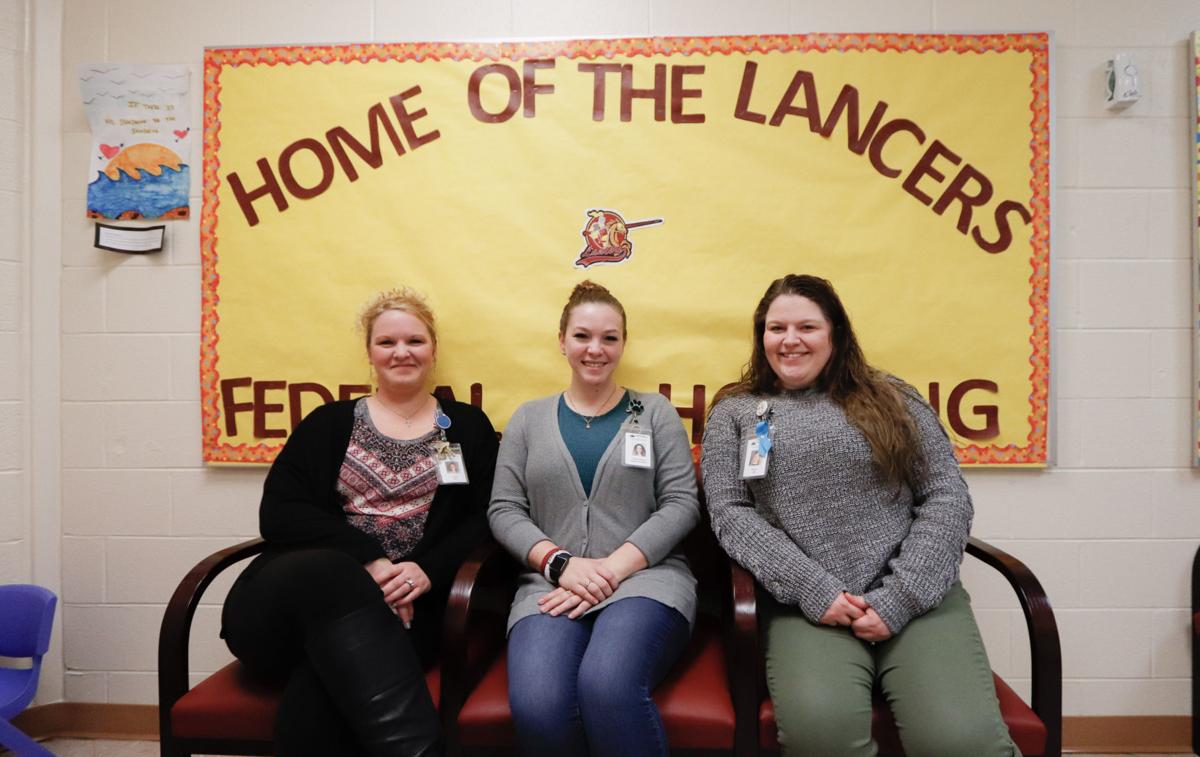 Left to right: Crystal Norton-Bolin, Megan Spergin, and Kelsey Zimmerman pose for a picture in the waiting room. 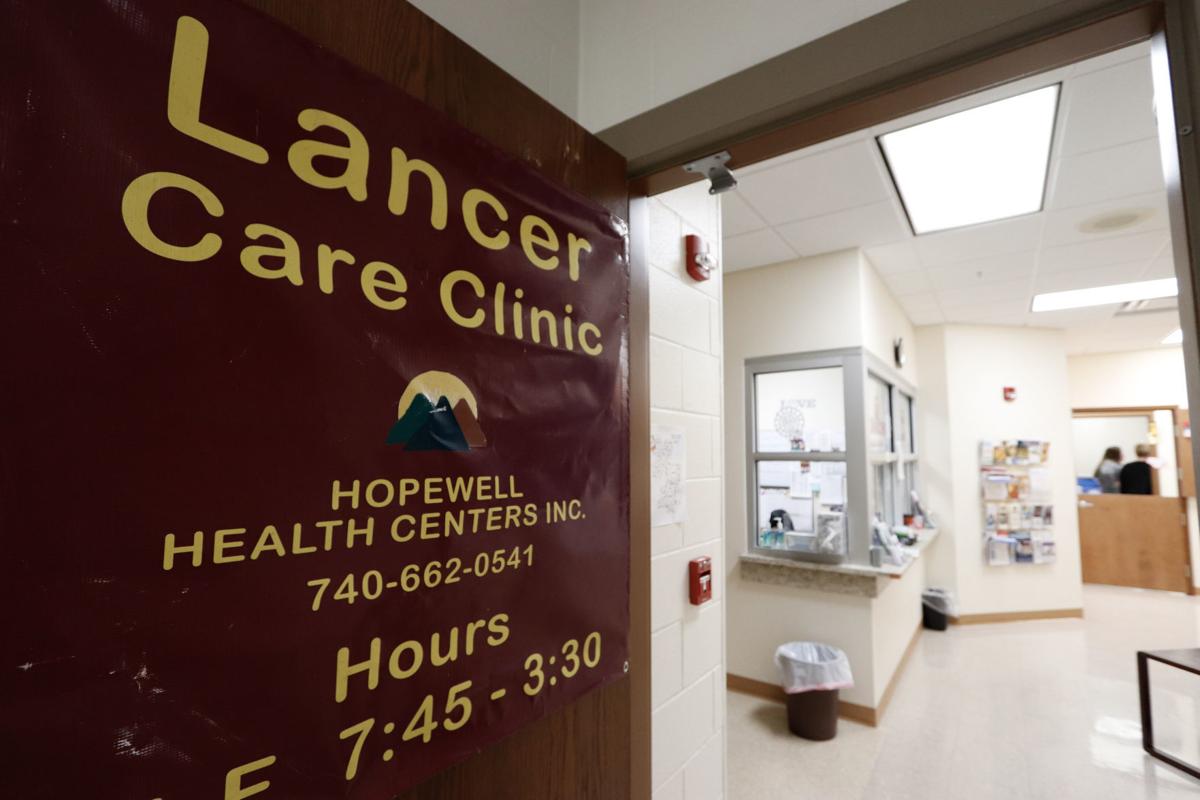 A large sign on the door indicates where patients are to go. 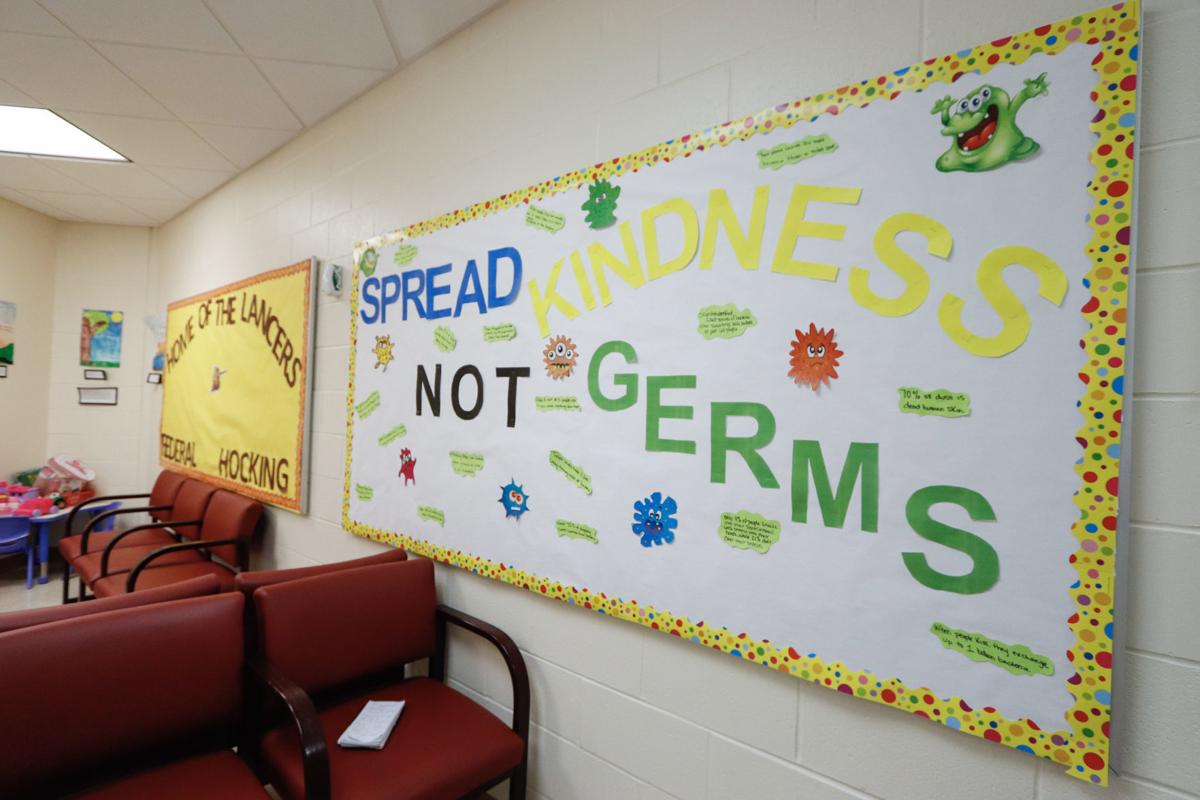 The staff decorated the waiting room to make it feel friendlier for students seeking care, as well as community members. 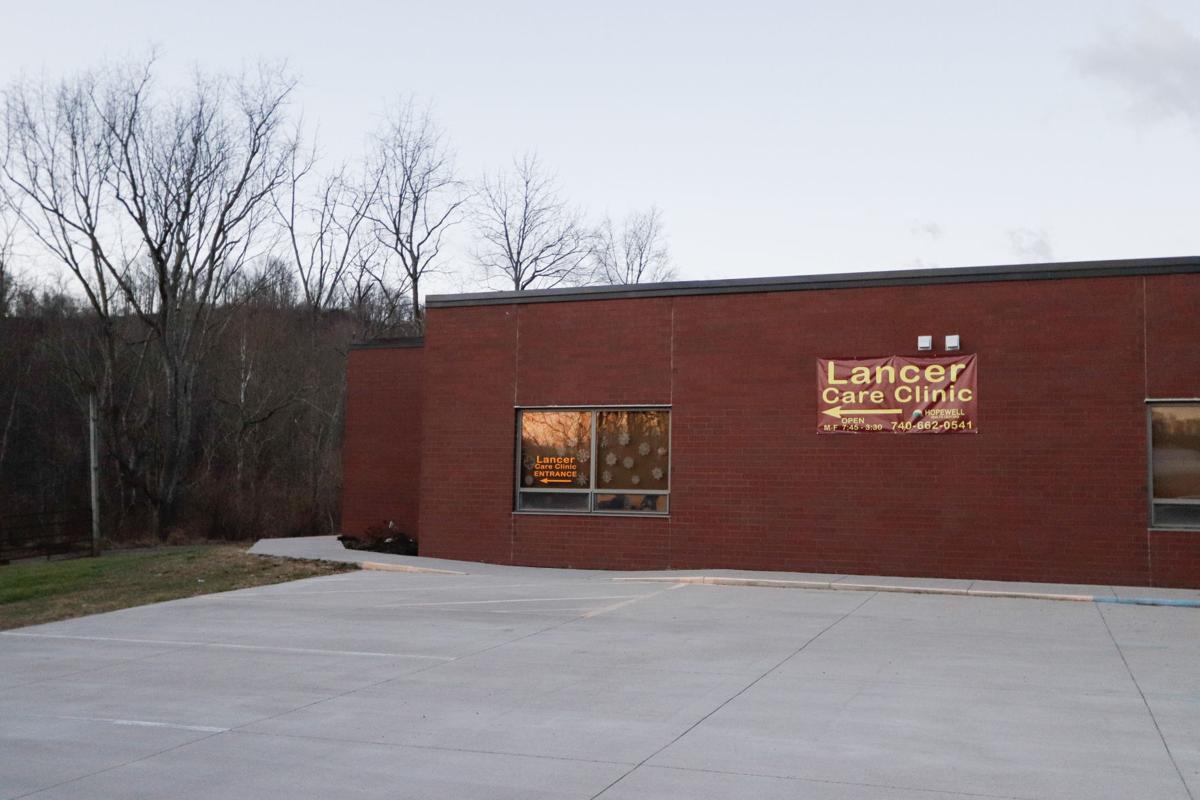 Here is the outside of the care clinic from the parking lot. Signage on the walls indicate where patients should go. 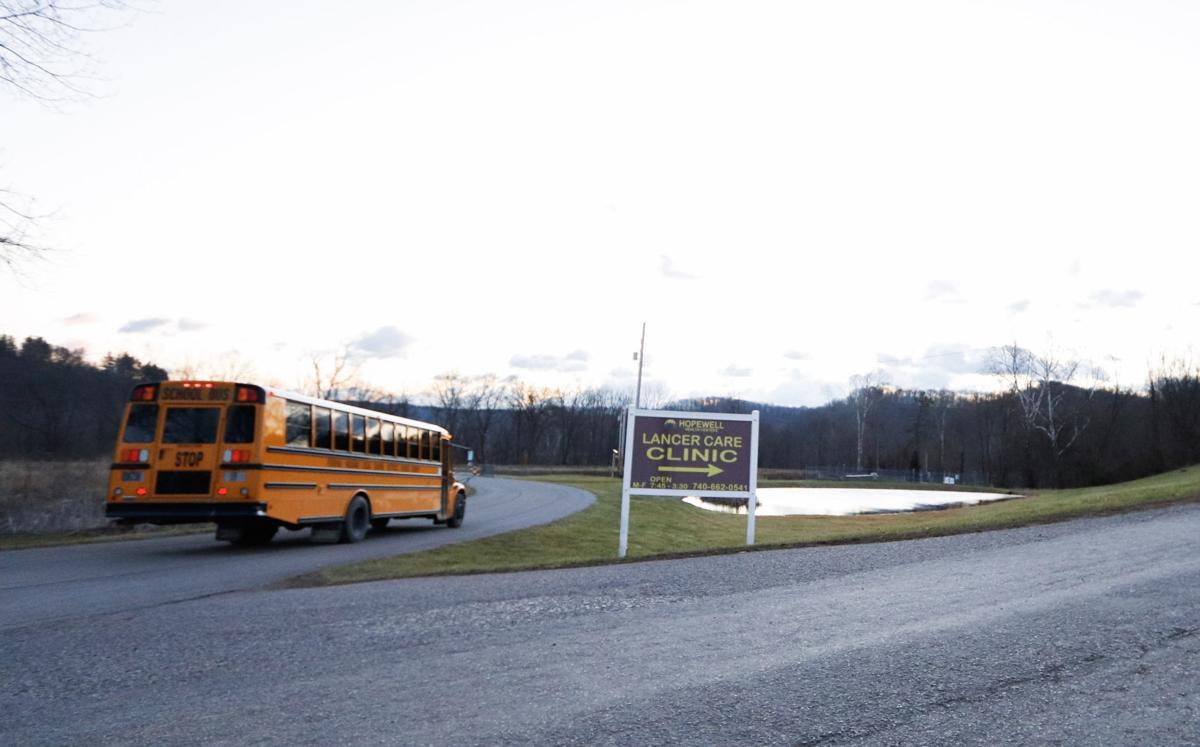 A sign by the main road through the federal hocking campus points up the hill to the Lancer Care Clinic.

Crystal Norton-Bolin, LPN, shows one of the student care rooms — a cot allows students to lay down in a quiet, dark place if need be.

Megan Spergin, the nurse practitioner, shows one of the treatment rooms. Each of the care rooms has art work from Federal Hocking students decorating the walls with positive messages.

Left to right: Crystal Norton-Bolin, Megan Spergin, and Kelsey Zimmerman pose for a picture in the waiting room.

A large sign on the door indicates where patients are to go.

The staff decorated the waiting room to make it feel friendlier for students seeking care, as well as community members.

Here is the outside of the care clinic from the parking lot. Signage on the walls indicate where patients should go.

A sign by the main road through the federal hocking campus points up the hill to the Lancer Care Clinic.

Note: This story appears in the Friday, Jan. 10 newspaper on Page A1.

STEWART — Students at Federal Hocking Local Schools have been spending more time in school since a new clinic has opened in the Middle School building.

That’s because the students now have access to all sorts of medical care within the school. According to Superintendent David Hanning and High School Principal Cliff Bonner, the district had foregone a school nurse for over a decade due to budget constraints. Now, the clinic offers family care options to students (with guardian permission) without the students having to leave school.

“If they have a cold or something they can go to the clinic, be seen, and come back to class,” Bonner explained. “They don’t have to take a full day off — now, sometimes they give us a call that the kid needs to go home, but most of the time it can be treated here.”

The district has 207 square miles within it, all within Athens County. The district had been able to forgo having a school nurse because of a rules called the “5 of 8” rule. Districts choose five specialty positions to include in the district out of a list of eight, which range from art teachers to nurses, music teachers to librarians.

“There is no easy way to get to the different parts of the district because of the geography,” Supt. Hanning explained. “So when you talk about little places like Stewart or Guysville, or especially Amesville, there just isn’t a quick or easy way to get care there.”

He noted that the Federal Hocking High School is somewhat centrally located within the district, and gives the community more access due to proximity.

“We’ve had some conversations since I started about finding space to try and do something similar in Amesville,” Hanning said. “Looking at that location particularly, if there is any kind of healthcare emergency it’s going to be 20 minutes to a half hour before an emergency squad can get to Amesville.”

In the Athens City School District, two nurses travel among the various school buildings to provide student care. Nelsonville-York City Schools employ a district nurse, and Alexander Local District has at least one health aide in the district. Trimble Local Schools have a clinic operated by Hopewell Health Centers inside its district, but it is not a community clinic in addition.

In March 2017, the Federal Hocking clinic first opened its doors in the Middle School, where school classrooms had been remodeled into a waiting room, offices, treatment rooms and student rest rooms.

Forms are passed out at the beginning of the year for parents to fill out and return, but are also available at the clinic. Basic first treatment measures, such as Ibuprofen and other simple treatments, are provided free to students as the school covers the cost of the pain medications, band-aids and such.

Community members are encouraged to come to the clinic for family practice matters, such as prescription refills, check ups and immunizations. However, patients seeking help with medical matters that may impact behavior, such as opioid withdrawal, are asked to not frequent the school clinic due to its location at the Middle School. Sports physicals are also provided by the staff for free during the summer.

“The biggest benefit is that we have somebody here every day who serves as a staff nurse. That’s probably the biggest thing,” Hanning said.

Another benefit is any medications students take are no longer dispersed by the school secretaries — instead, the medications are kept secure by the clinic and dispersed by knowledgeable medical professionals.

Security, of course, is an important measure for the clinic. An outside door, complete with a buzz-in system, allows clinic staff to watch the comings and goings of community members. Another clinic operated by Hopewell exists in the Trimble School District, but the lack of an outside door means the clinic is purely for the school.

No school funding goes toward the clinic, besides providing the space and utilities. The Healthier Buckeye Council Grant provided the funds to build and equip the center, as well as the Children First Council.

There are three full-time staffers of the clinic: Megan Spergin, who started her time in the medical field years ago as an RN in a hospital setting. She worked several areas including Med Surg and Urgent Care while earning her certification as a Nurse Practitioner.

Crystal Norton-Bolin works side-by-side with Spergin as an LPN. The two characterized their style as “tag-team,” working together with each patient (when possible) to ensure the patient doesn’t have to explain their problem multiple times and has a shorter acute care visit.

One of the last parts Spergin hopes to be cleared for is the ability to provide stitches and similar care — she already has experience administering such care during her time in emergency room situations, but the clinic needs to be approved for it first.

Kelsey Zimmerman, a CMA, works at the front desk. She also is trained in medical work, so if need be, she can pitch in with care giving. The three are managed by Terrie Baringer, who is usually at the Coolville location. The three full-time Federal Hocking site staff members have worked hard to become active members of the community.

Principal Bonner noted the three women had made popcorn recently for the school play, and are present at as many events as they can.

“They’ve made a big effort to be a part of this community,” he said.

Beyond that, the team has also worked to provide extra resources to the students and staff in the district. Bonner noted the nurses have been able to teach students about cleanliness and other health education measures. They’ve also provided training to the staff on medical emergencies.

Community members interested in utilizing the Federal Hocking clinic can call the health center to schedule an appointment, something Spergin says helps patients have faster visits.

“Now that we’re full-bore school nurse capacity, working with the school and having students in and out, appointments make it so much easier for patients,” she said.

Community patients can access the clinic by driving to the far left side of the campus, where a small parking lot has been paved. The entrance is around the corner, and a buzzer system allows Zimmerman to talk to the folks before allowing them into the building.

Referrals, prescription refills, and other standard care options are all available at the clinic.