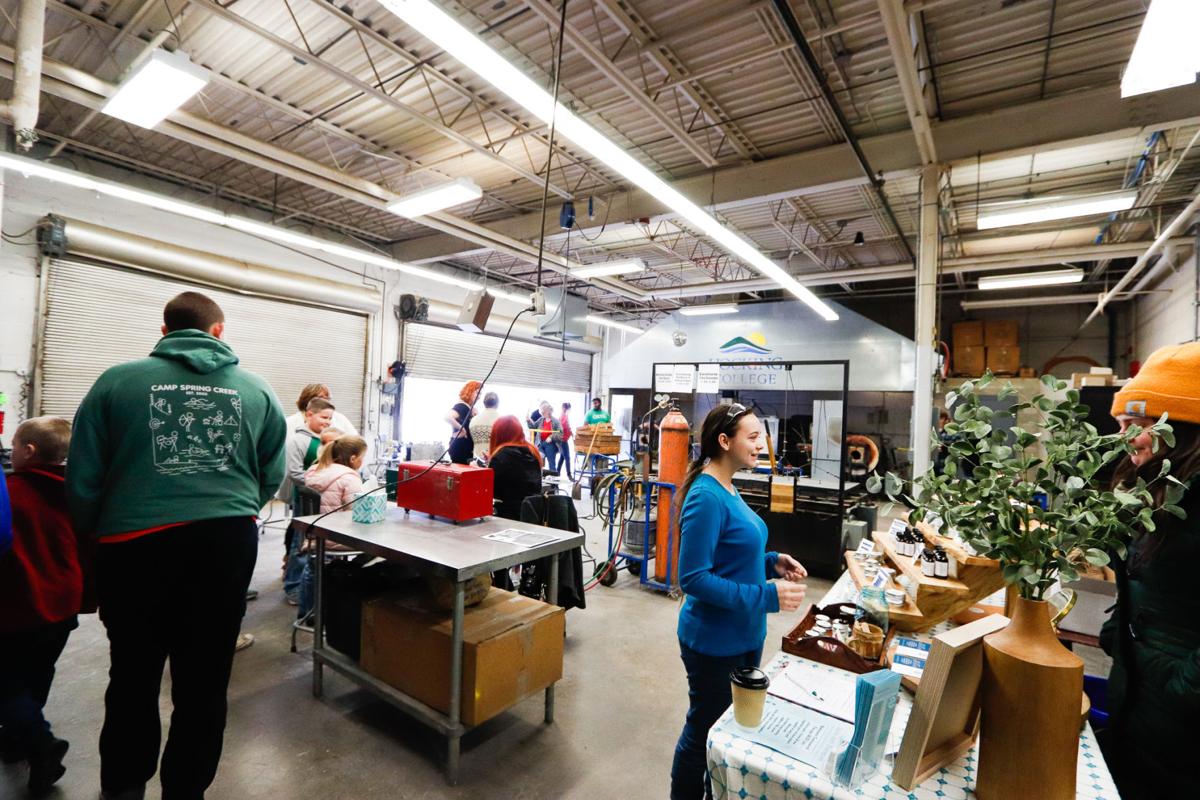 The glass blowing workshop was filled with interested folks. 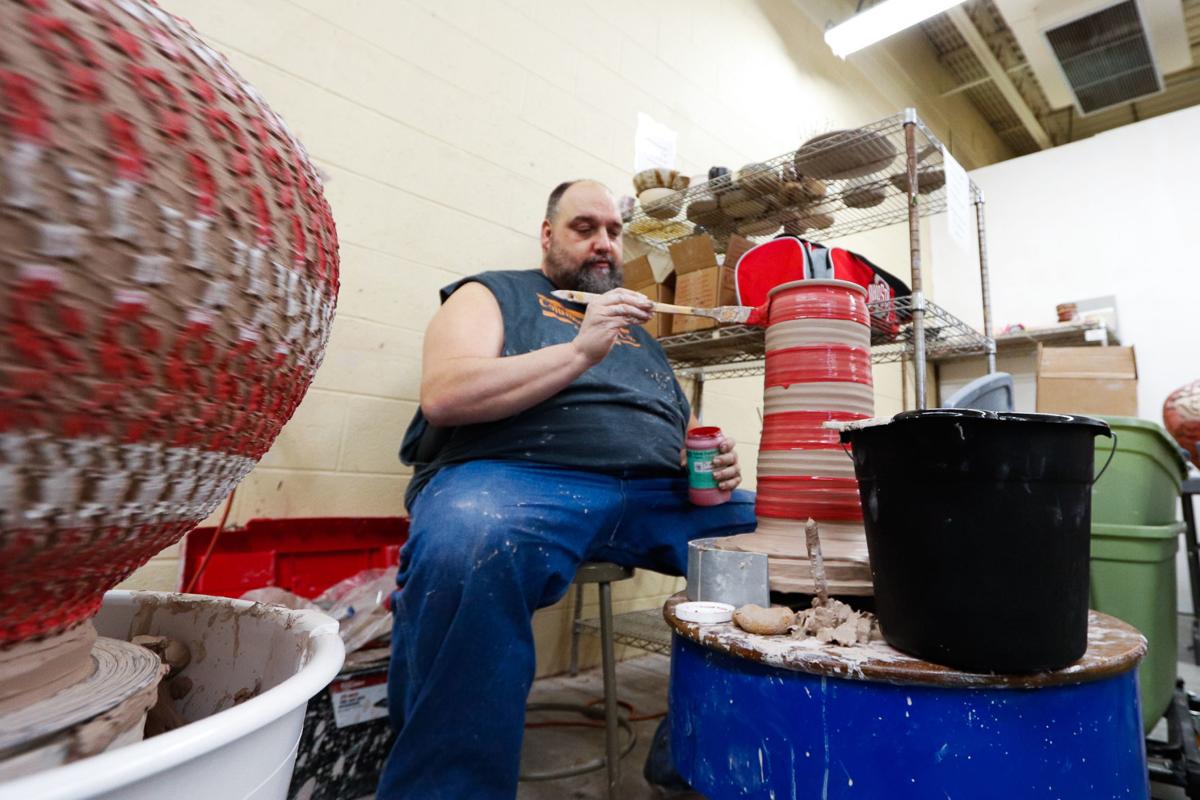 Russell was working on two pots at the same time. 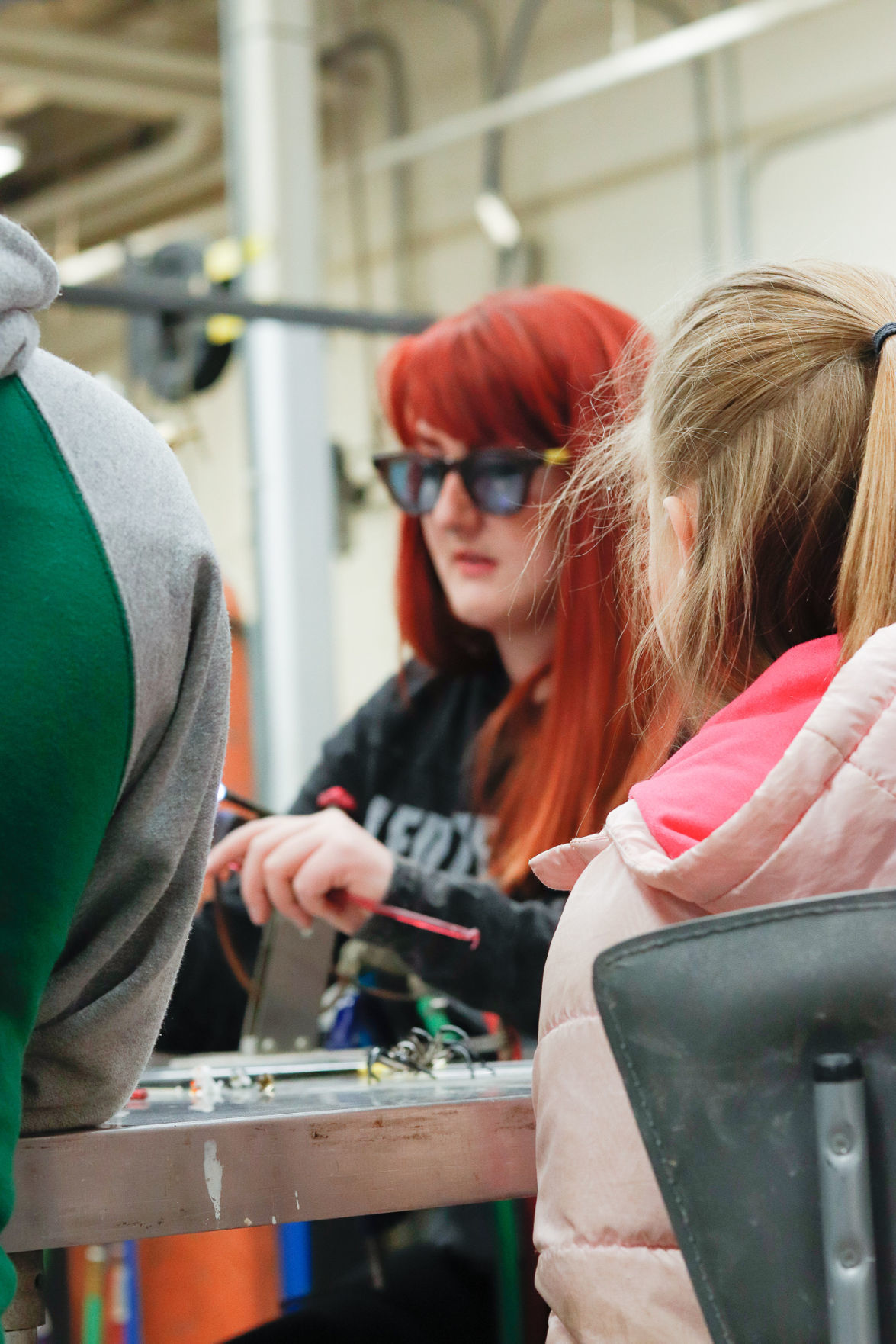 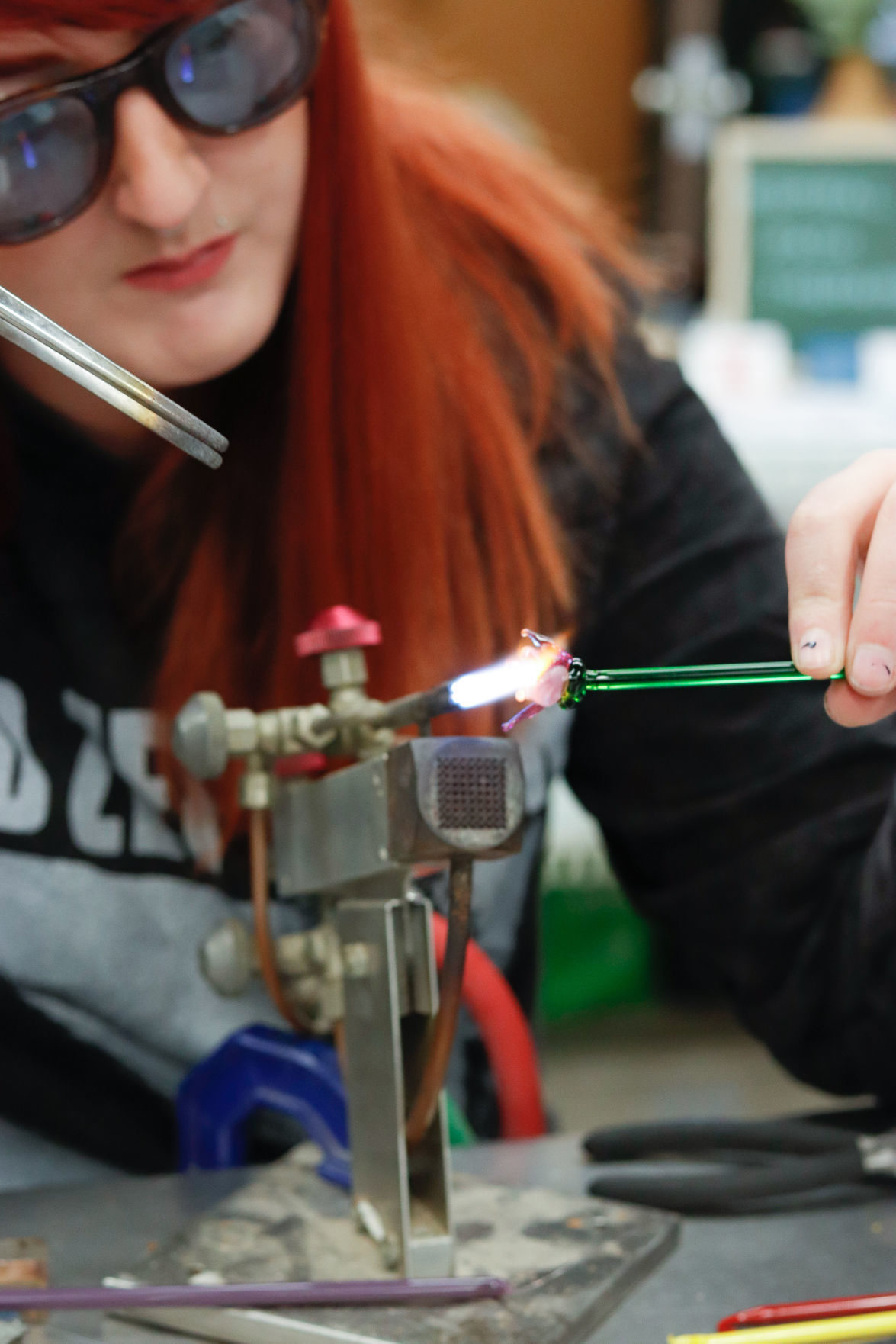 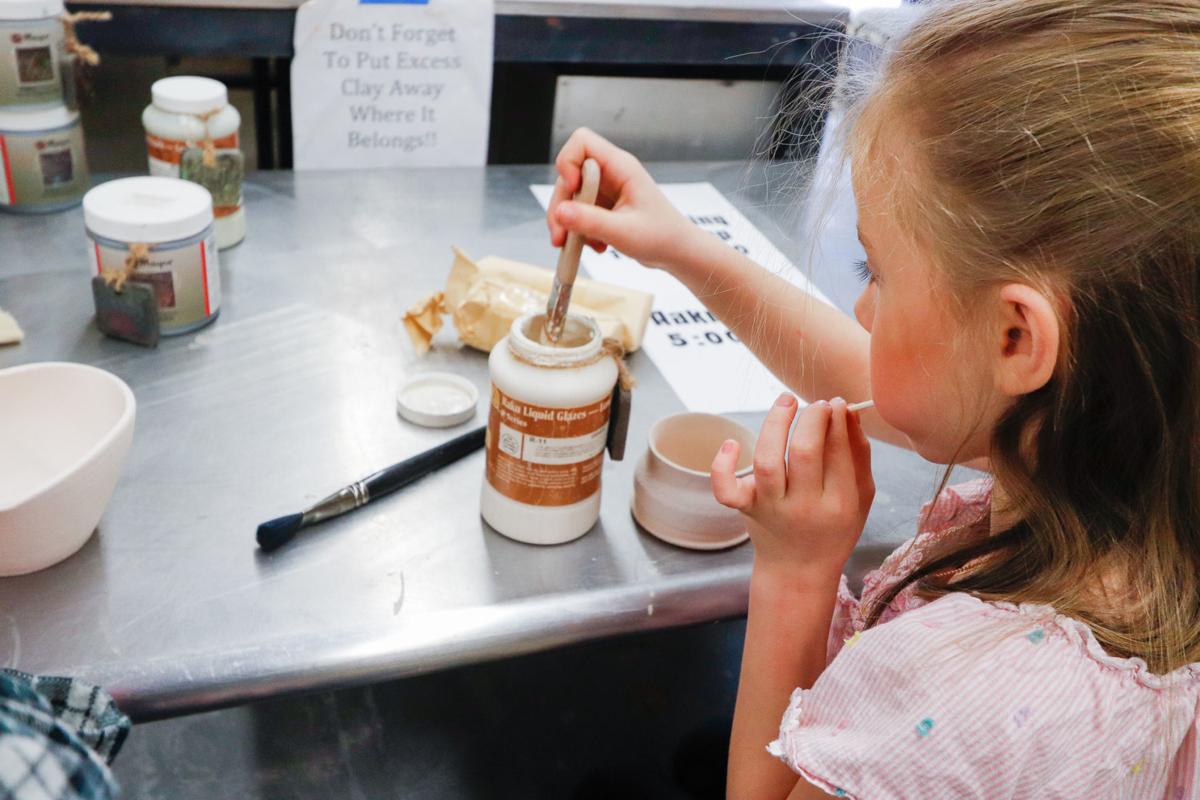 A glazing workshop was hosted in the afternoon.

The glass blowing workshop was filled with interested folks.

Russell was working on two pots at the same time.

A glazing workshop was hosted in the afternoon.

NELSONVILLE — Saturdays on Hocking College’s campus are generally quiet, but inside the Visual Arts Center, a group of volunteers, students and staff gathered to host community members interested in taking classes.

The event was called Fire Fest, and was designed to expose area residents to the various glass, ceramic and other fire-based media classes Hocking College has to offer. The event lasted from noon to 9 p.m. and featured many demonstrations for local and regional artists.

The Fest was also in part a replacement for the Fire & Ice Festival, which was held through 2015 as part of the Final Friday events. That event featured ice sculpture carving, fire-and ice-based treats, and other themed activities.

Sabrina Suman was on-hand for a flamework demonstration in the afternoon. The Hocking College alumna had earned a degree in chemistry from Ohio University, but found that her interests lay with the arts. However, her background in chemistry was helpful for her art as each glass utilizes different elements for each color.

Because of this, each color has a different melting point and reaction to the flame, something Suman was able to predict better due to her background.

“I first found out about flamework at Hocking College, then I attended Ohio University for four years, where I studied chemistry and ceramics,” she said. “I came back to Hocking College, and I’ve really enjoyed the artist community. I now work at Jack Pine Studio ... and there I’ve been able to use my ceramic background toward my goal of using ceramic engineering and building different kilns.

“It’s been cool to tie my different backgrounds together, and without Hocking College and these classes, I probably wouldn’t have the job I have. I think a lot of people don’t realize they’re into something until they have access and can see it,” Suman remarked.

Kevin Russell was also on-hand throughout the afternoon to discuss ceramics. He was throwing two large pots. Russell, a veteran ceramics educator having worked at South-Western City Schools as the art teacher for over 20 years, was speaking with visitors to Fire Fest about his technique, interactions with students and changes to ceramics during his career.

Sarah Stacey, an alumna of Hocking College still involved with the college through her fiancee, said she was happy with how the event was progressing.

“The art program does need more events and recognition, so I was happy to help out,” she said. “Everyone seems entertained and happy to be here.”

She said her favorite parts of the event were watching the potters work, as well as the glass blowing demonstrations.

“I love watching them work,” she said. “Support your local artist, they do cool stuff like what’s going on today.”

Suman was equally happy with how the event progressed.

“I think this is really awesome,” she said. “I got involved through Whitney Goller. Her assistant reached out to me ... asked me if I would be interested in flameworking, because I took the class when it was available in 2014. So of course, I went ahead and took advantage of that. All I had to do today was pick out my colors and start making whatever I like.”

Other demonstrations throughout the day included glass casting, fused glass, raku firing and throwing tiny in ceramics. A tallest cone competition took place to see who could throw the largest cone on the wheel. Vendor booths for the Dairy Barn Arts Center and other local arts organizations were also present.

The fest was supported not only by Hocking College, but also the Hocking Makers Network. The Network was launched recently by Hocking College, but is not overtly branded as part of the college to help further the goal of appealing to a broader community in Nelsonville and surrounding communities than just students and staff at the college. The hope with the program is to foster entrepreneurs, sending more people through workforce training programs and creating a “pipeline” of new students to Hocking College.

Although the Network is technically a nonprofit, HMN’s website discusses how as a business the goal is to pivot Hocking College classes, resources, events and services to areas that are in most demand. The hope is for this to become a model across “the Midwest and beyond, and continue to cement Hocking College’s innovative practices.”