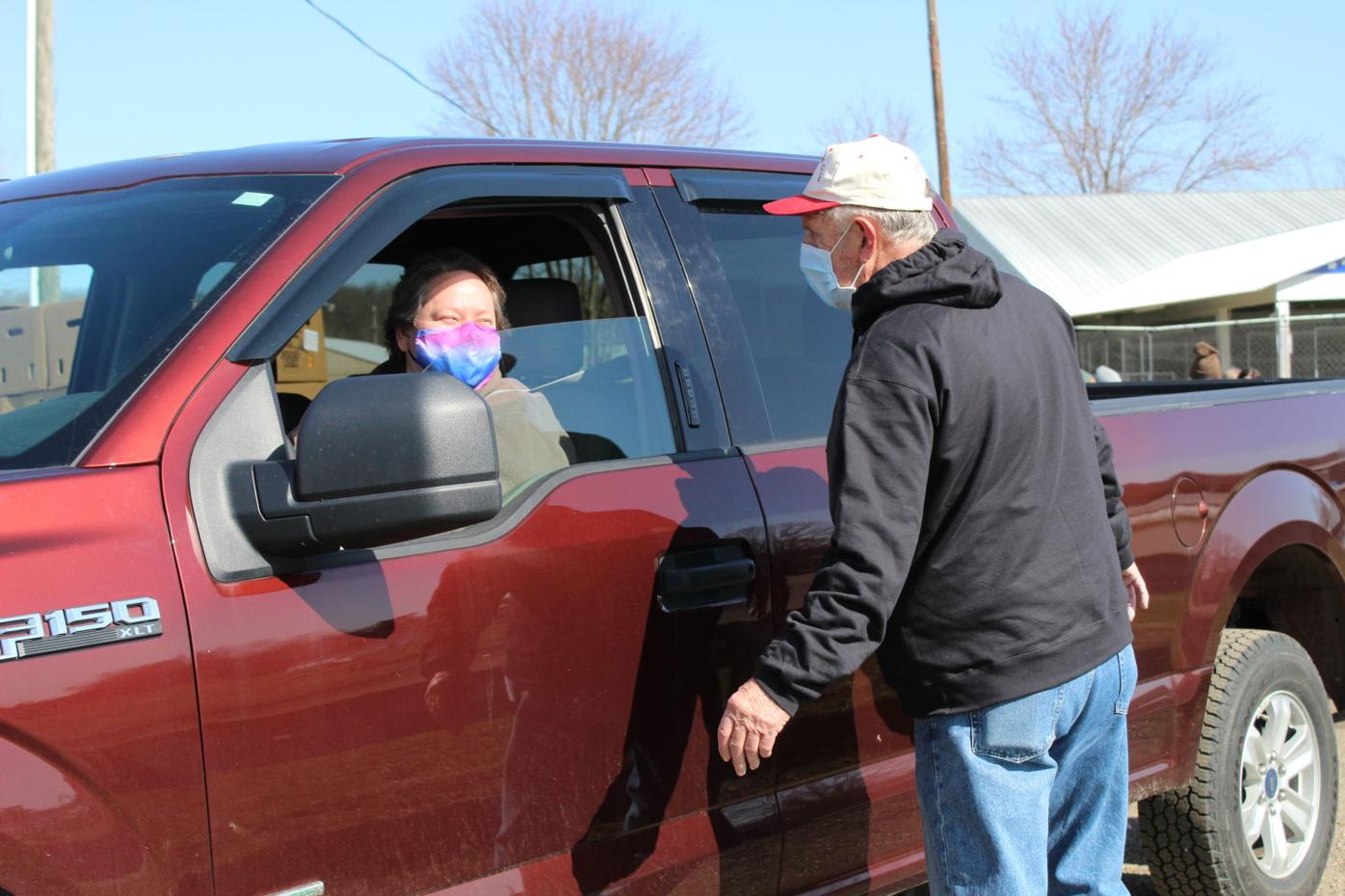 Joe Roberts, 79, assists those who need food boxes each weekend at the Athens County Fairgrounds 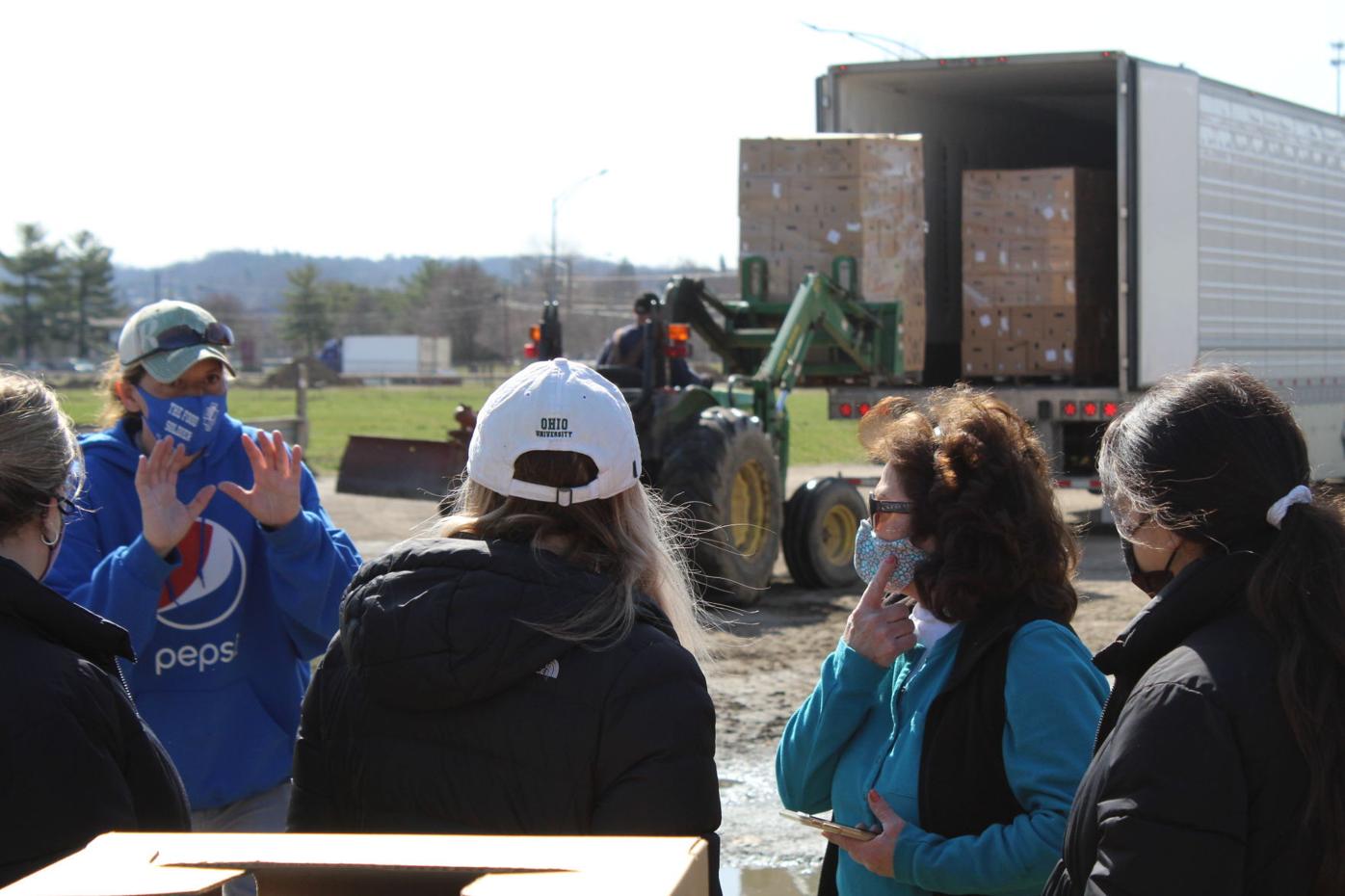 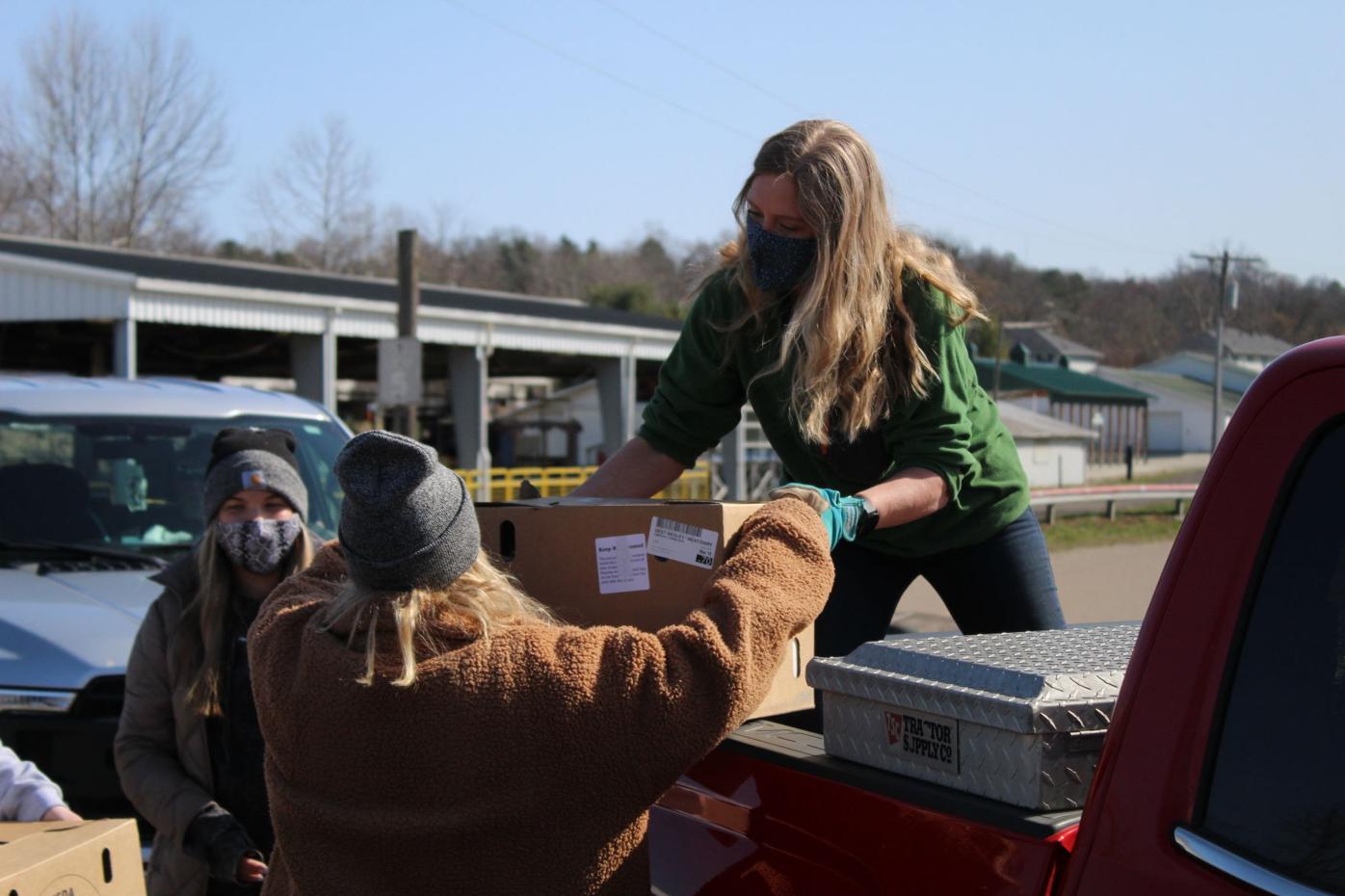 Volunteers load boxes of fresh food into a truck. 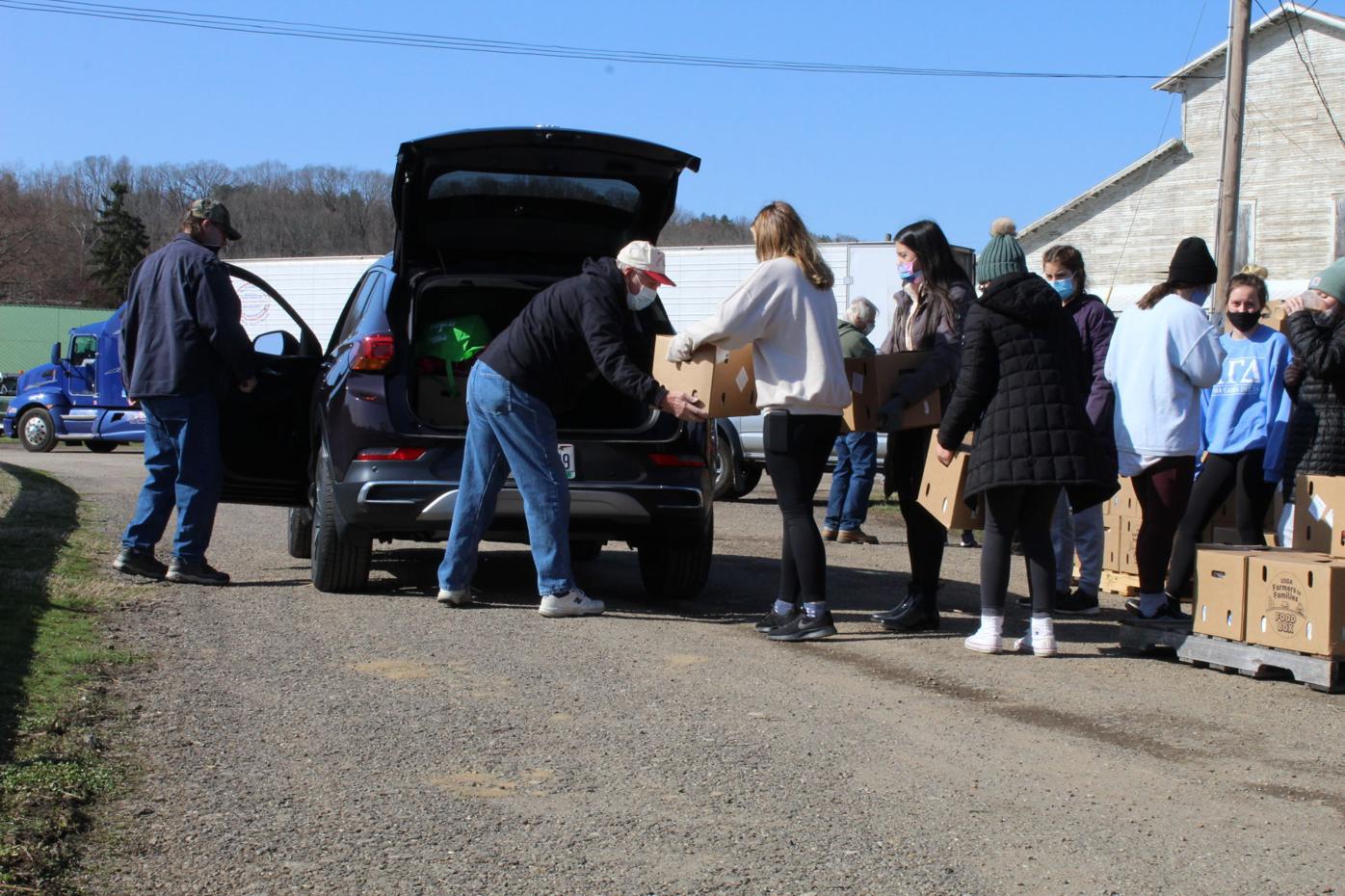 Volunteers load boxes into a car. 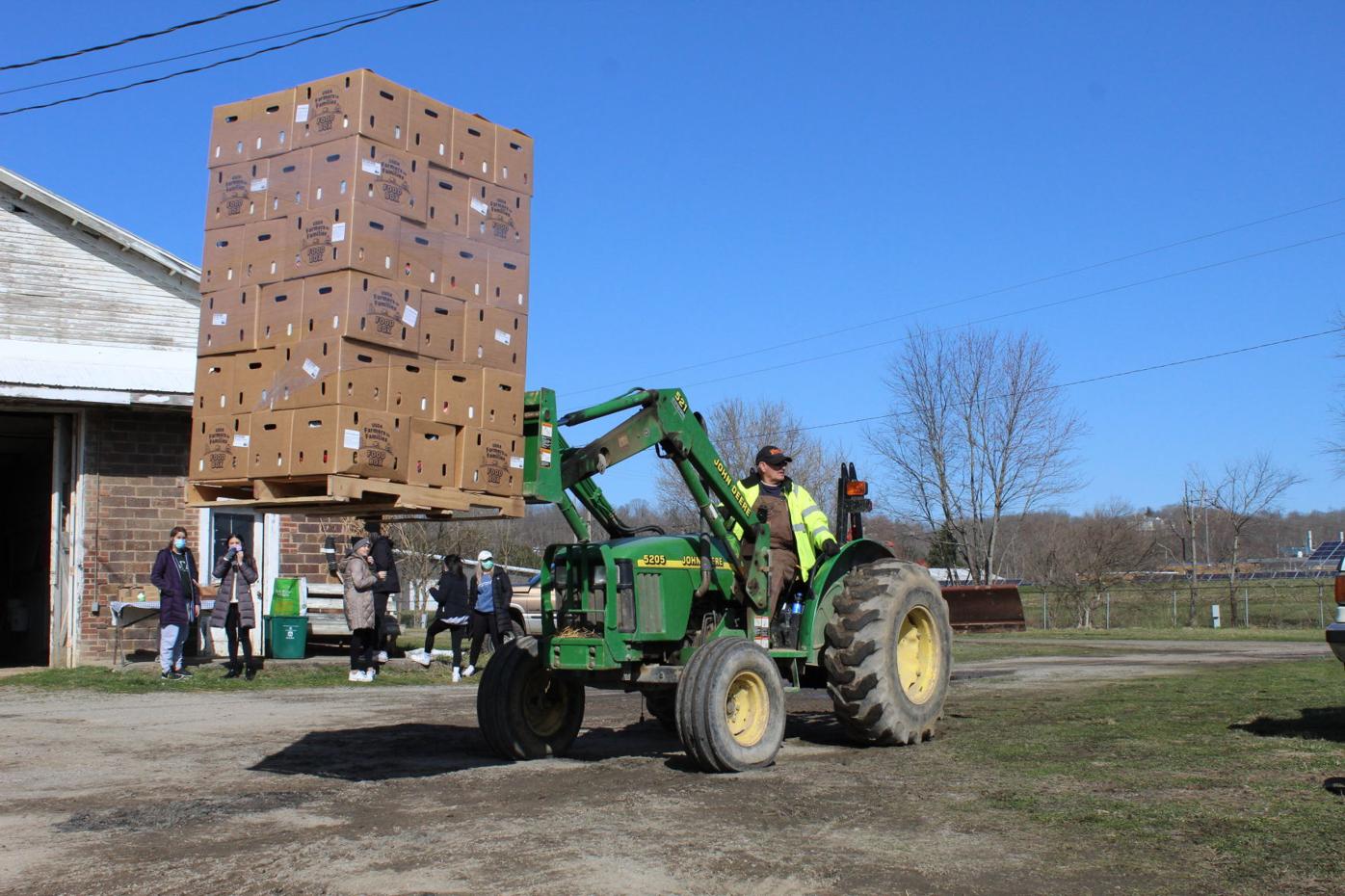 A volunteer uses a forklift to move boxes

Joe Roberts, 79, assists those who need food boxes each weekend at the Athens County Fairgrounds

Volunteers load boxes of fresh food into a truck.

Volunteers load boxes into a car.

A volunteer uses a forklift to move boxes

For months now, volunteers at The Athens County Fairground have been distributing boxes of fresh food to those in need — and building a community of those dedicated to serve along the way.

Although the lines are a lot shorter than they were in January — in fact, there is hardly a wait at all for boxes of fresh produce, meat and dairy supplied by the USDA Farmers to Families program — some community members come out each week to help those who need it.

Michelle Baker, volunteer-turned-organizer, took over the role of organizing the distribution from Roshelle Pate, said the weekly food distribution has built a small community of people who want to give back.

Some volunteers, like Nonso Ugwumadu, 29, have been attending the food distributions almost every week since 2020, when the program initially began in a limited fashion.

He said he’s seen the community forming since he started volunteering. Ugwumadu said the bond has formed to the point where he is now having dinner with a few of the volunteers.

“I mean, I came here last August and now it’s like this small family I have here,” Ugwumadu said. “I always look forward to coming here on Saturdays.”

Ugwumadu, of Nigeria, is in Athens studying for a PhD in physics at Ohio University. He said he is just “here to help.”

“It’s the feeling, just to put a little good out there with all the stuff that’s going around,” Ugwumadu said. “Just being able to do something feels good.”

Each week, Ugwumadu can be seen taking initiative, energetically running from task to task — whether that is loading a truck bound for a church or loading boxes into an individual’s car.

“I think that’s God-given,” Ugwumadu said. “I have a whole lot of energy, I’ve always been that way.”

Another volunteer, Joe Robert, 79, is often seen directing cars forward and asking individuals how many boxes of food they need.

He said when he was a “youngster,” living in West Virginia, he had “an awful lot of help growing up.” He wants to give that help back to those who need it.

“I was from a poor family in West Virginia,” Robert said. “And I’m a little older now and a little better off, so I’ve got an opportunity to help out. I’m just trying to pay back a little bit.”

Another volunteer, Nick Sze, 19, and an undergraduate at Ohio University, said he and his friend have been volunteering for weeks now, said he originally started to give back and learn more about Athens County and the issues that face it.

“I think being a student on campus is a little more isolated — you don’t get to see too much of what goes on in the community and it’s been nice because you get to see the same people each week,” Sze said.

Sze said the service to the community and seeing the people he has met through volunteering has been a rewarding experience.

“And you can look forward to talking to them about school — or right now — we’re talking about basketball,” Sze said. “It’s just nice to connect with people other than students sometimes.”

Sze encouraged other students to consider lending their time to the cause.

“Just be open,” Sze said. “There are things going on that you might not be aware of, but just being blind to it doesn’t solve any kind of problem. Being a student here, and an important part is being aware of where you go to school and what you can do to help while you’re here.”

When The Messenger first interviewed Baker in January, it was from across the street as she struggled in vain to negotiate the massive line of traffic the food distribution was causing.

“Where are the students?” Baker shouted at The Messenger reporter in January.

Now, the students are there. The community is there. And they are prepared to hand out food to those who need it.

Baker said although a community of volunteers have formed, she doesn’t want to discourage anybody from joining in distribution each weekend through the end of April.

“Come on out,” Baker said to anybody who might be considering volunteering. “Don’t let us deter you because we’re saying ‘we have this group of people.’”

For Baker, she said she loves organizing these distributions and serving her community because it is a way to give back.

As an Athens County native, Baker said helping this community is particularly important to her.

“It warms my heart knowing that we can provide these semis with all this food to help around here,” Baker said. “Athens (city) is not as poor as a lot of these other places. Like these people come and they’re probably from the neck of the woods that maybe can’t get out and get groceries like normal people. But to give back to Athens and all them, it warms my heart.”

“I keep on saying, the Lord’s looking down on me,” Baker said. “And I’m going to get paid when it’s my time.”

Food distribution at The Athens County Fairgrounds through the end of April. Those who wish to inquire about volunteering or distribution can contact Baker at 740-818-6395.