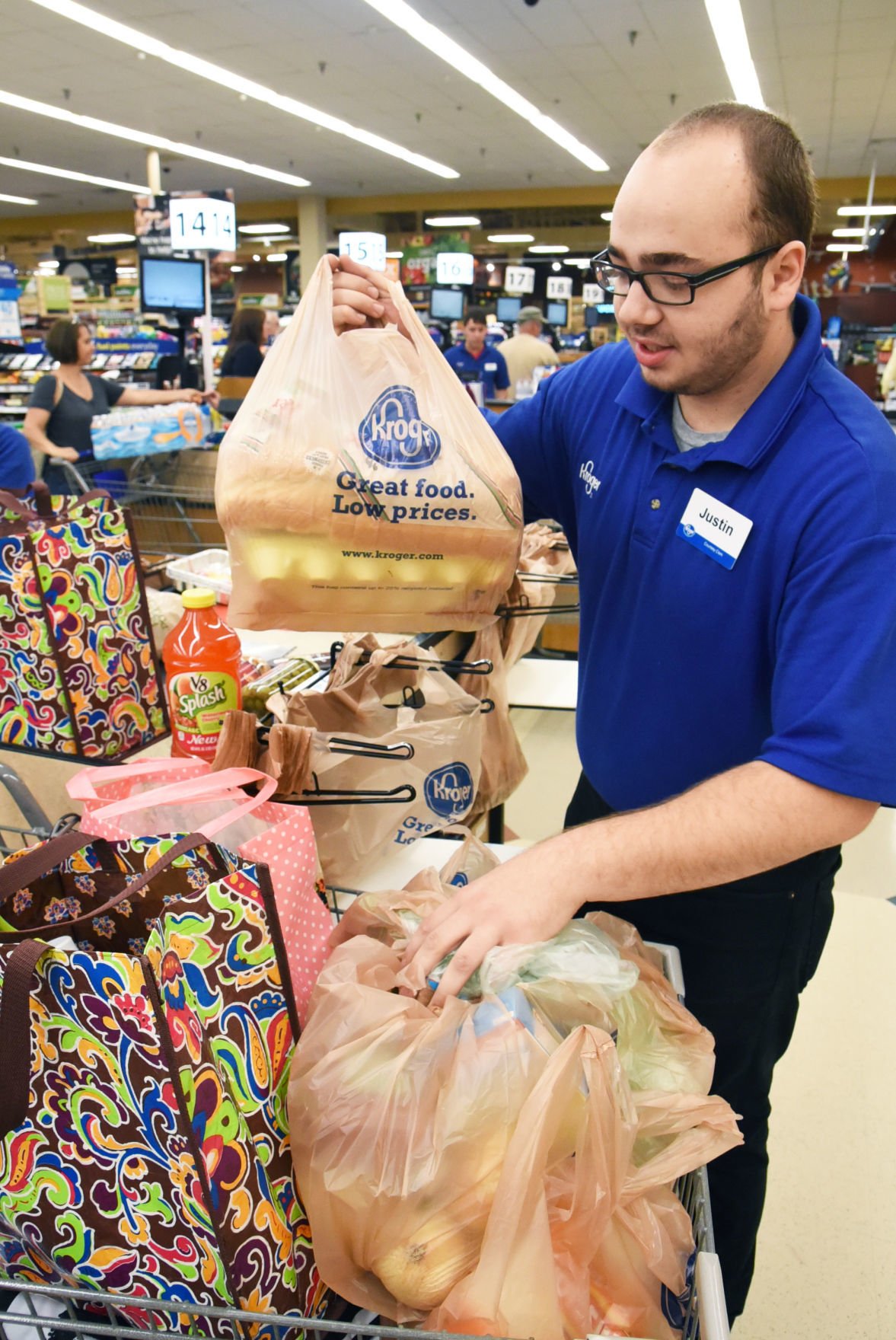 Justin Swails, an employee at Athens Kroger in 2016, is pictured in this file photo taken in May 2016. He said about a third of his daytime customers utilized reusable bags. This customer used about eight reusable tote bags before plastic bags were used. During this time frame, then-Athens City Councilwoman Jennifer Cochran proposed a 10-cent fee on single-use plastic and paper bags from retailers in the city. 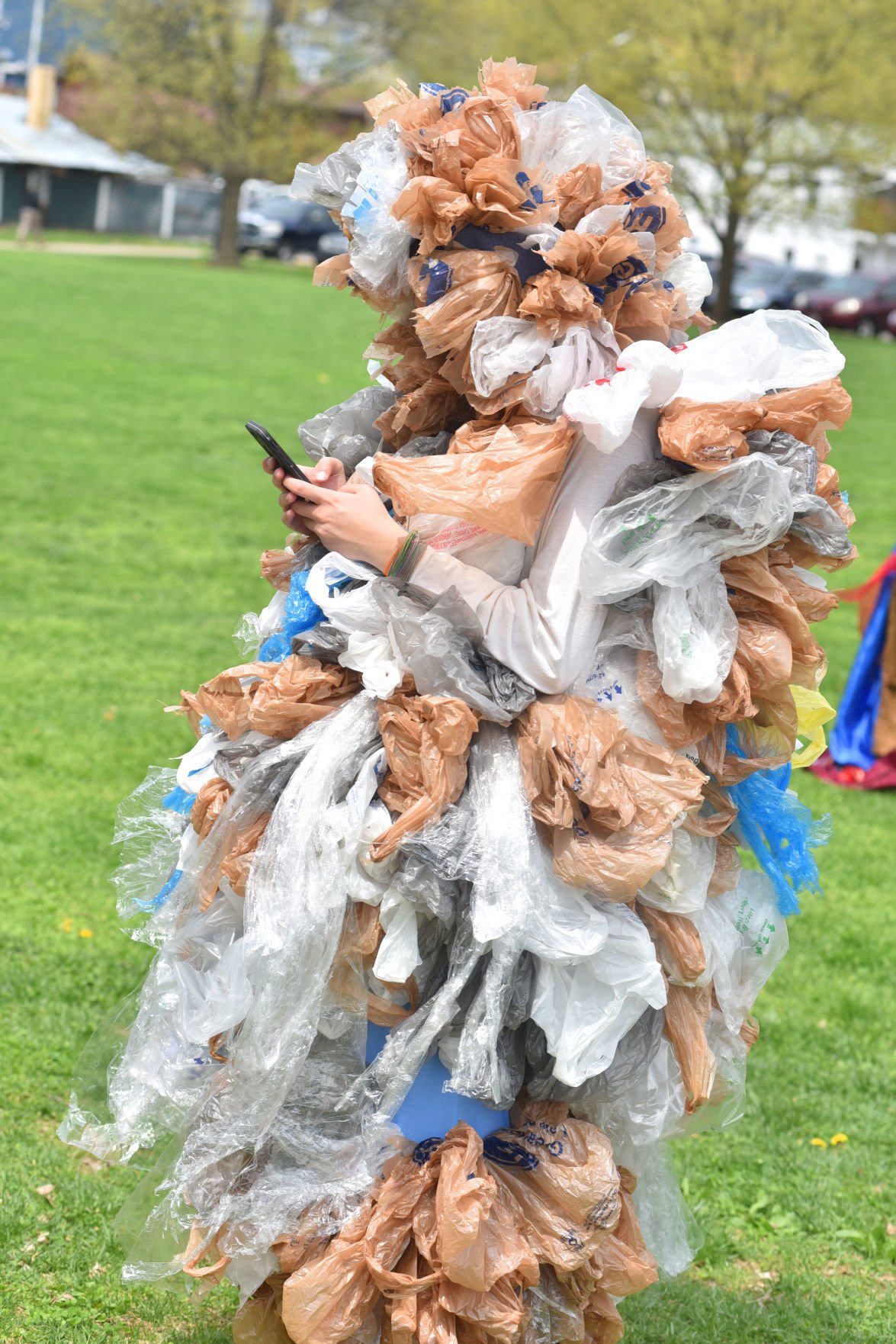 With costume made up of plastic bags, the “Trash Monster” takes time to check her cell phone.

Justin Swails, an employee at Athens Kroger in 2016, is pictured in this file photo taken in May 2016. He said about a third of his daytime customers utilized reusable bags. This customer used about eight reusable tote bags before plastic bags were used. During this time frame, then-Athens City Councilwoman Jennifer Cochran proposed a 10-cent fee on single-use plastic and paper bags from retailers in the city.

With costume made up of plastic bags, the “Trash Monster” takes time to check her cell phone.

A possible ban on plastic shopping bags has been floating around Athens City Council for some time now, but grocery store staples are still far from disappearing from local stores. But recent research-based recommendations may offer future alternatives for a more plastic-free Athens.

Jessica Dalzell, a former Ohio University graduate student, has been interested in sustainability since high school, when she began grocery shopping for her family just so she could ensure her household was using reusable shopping bags.

She moved to Athens for graduate school in 2017 and she started attending environmental and sustainability commission meetings, where she became aware that former Athens City Council member Jennifer Cochran supported a resolution to collect data on single plastic usage in Athens. After encouragement from her school adviser, she took on the project for her graduate thesis.

Dalzell’s original study focused on gathering data from big grocery store chains in Athens to see how many plastic bags they used. But after she had difficulty getting data from chains like Aldi, Kroger, and Walmart, Dalzell focused on more small scale solutions. After surveying hundreds of Athens residents, she was able to provide several suggestions to Athens Council on how to reduce plastic usage in the community.

Notably, most of her solutions had a positive angle rather than a punishing one.

“There’s a lot of negativity towards bans and taxes on plastic bags,” Dalzell said. “My advisor and I tried to come up with an idea to make it more of a positive thesis and highlight how we could improve upon our shopping habits.”

One of Dalzell’s recommendations was for the city to partner with non profits or citizen groups in order to provide free reusable bags to citizens who did not want to buy their own. She additionally was interested in the city providing a discount for using reusable bags at check out, rather charging extra tax for single use plastic.

Her other recommendations include bag sharing programs and grocery stores providing places to easily load up reusable bags in their stores.

Dalzell also encouraged educational programs on campus and in the community, and particularly wants to see educational programs put in elementary schools to get young kids interested in more sustainable habits. But she thinks all people, no matter their age, should take a closer look at the potential impact of their environmental footprint.

“Honestly I find it incredibly frustrating when you go to the grocery store and you see everyone around you with carts full of plastics,” Dalzell said. “The plastic bags are used for maybe 10 minutes to get the groceries home, you unload the groceries, and it goes in the trash. They’re such a temporary item that could be replaced so I find it frustrating that people aren’t willing to see the environmental detriments of that.”

Despite Dalzell’s new suggestions and Council representatives’ long time interest in a plastic ban, the issue has encountered plenty of roadblocks in recent years. In December, the Ohio legislature voted on a bill that would bar municipalities from enacting single use plastic bags.

Locally, the ordinance Cochran originally presented to limit plastic bag use in the city was tabled following concerns that a potential tax or a fee on plastic bags would disproportionally impact low income households in the community — something that could be fixed with Dalzell’s suggestion to use incentives for reusable bags rather than punishments for their single use counterparts.

Other concerns came from local businesses, such as the College Book Store, that use branded plastic bags as a form of advertising.

Since Sam Crowl, associate director of Sustainability at Ohio University, started heading the environmental and sustainability commission for the city of Athens in January 2018, he has looked for ways to listen to all sides of the issue before making any decisions. However, despite both local concerns and larger roadblocks, he believes that there is hope to make some change within the city.

“In Athens we’re a pretty progressive community and I think most people would be supportive,” Crowl said. “I don’t think there’s full community support of a ban, but I think implementing steps to reduce the reliance on plastic bags would be welcome in this city.”

While she is no longer a resident of Athens, Dalzell hopes City Council utilizes her suggestions in the future. Even though a possible plastic ban is slow going, she believes people still have the ability to make a difference on their own.

“Even if government action isn’t doing what you want it to do, you can still make changes that impact the environment,” Dalzell said.