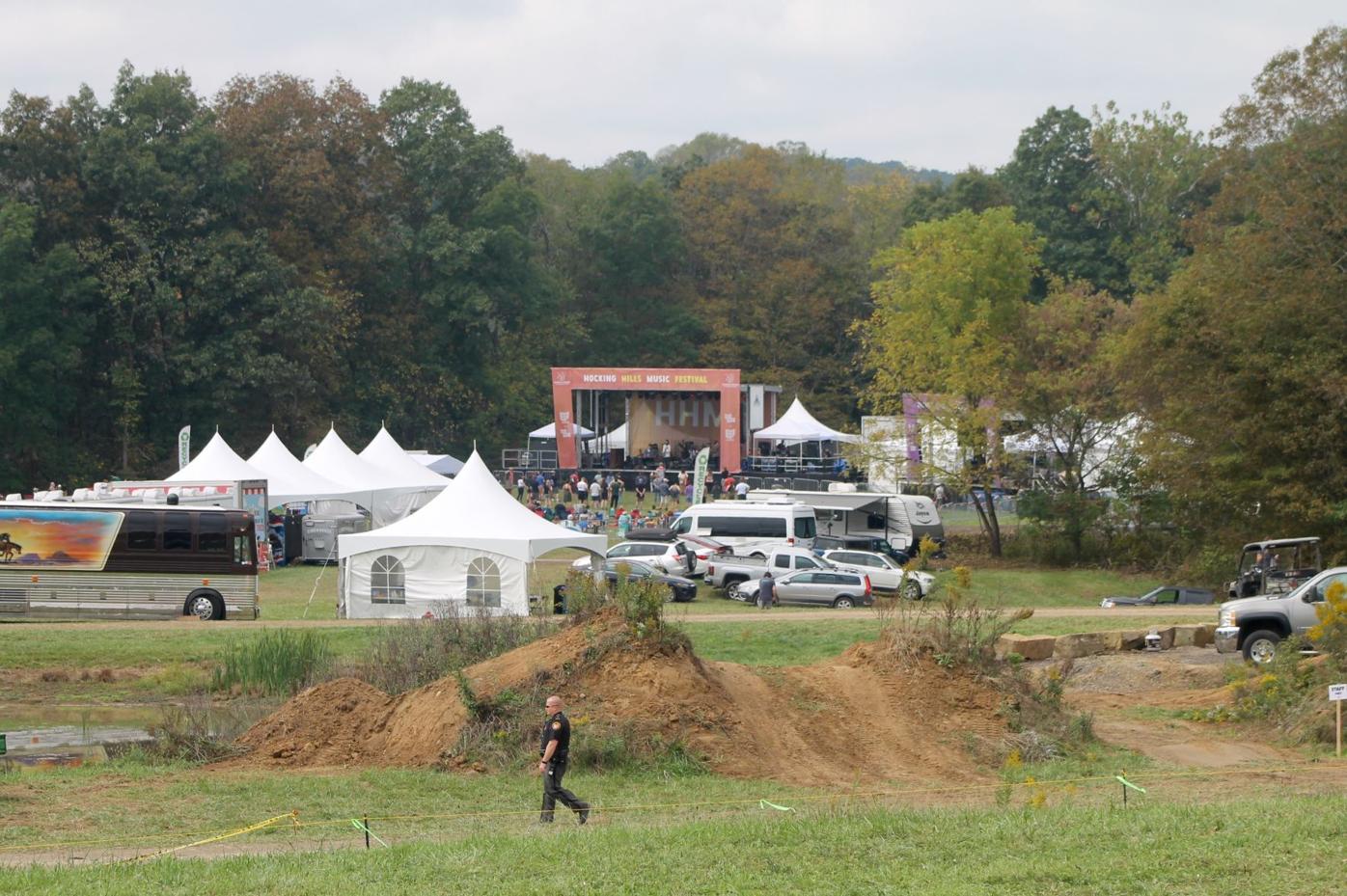 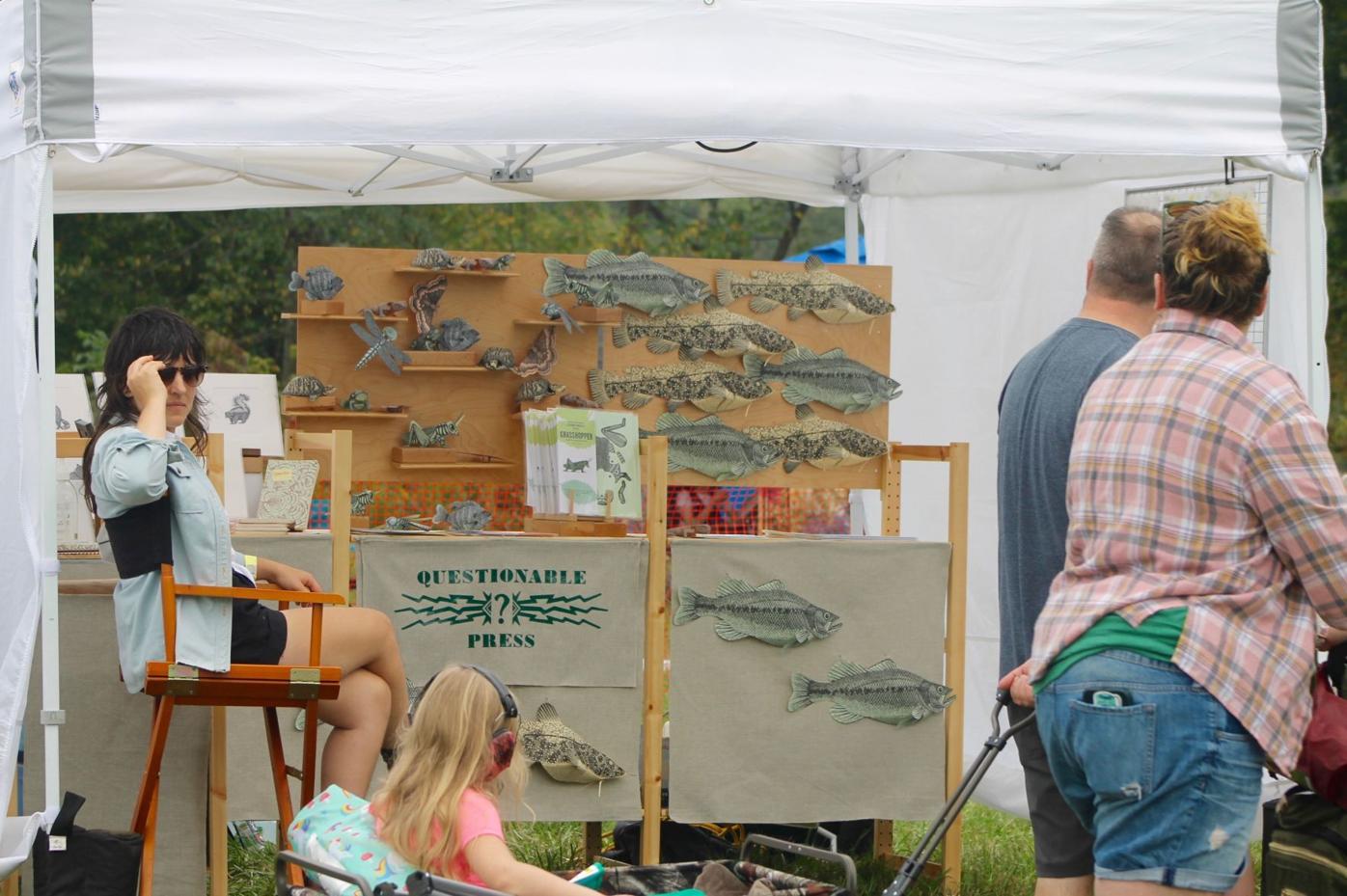 Artist Sarah Brown, of Lancaster, was among the vendors at the music festival.

Artist Sarah Brown, of Lancaster, was among the vendors at the music festival.

ROCKBRIDGE - Up a gravel road on a hilltop, amid a choir of frogs, insects, birds and falling leaves, campers and musicians gathered this weekend to celebrate the first-ever Hocking Hills Music Festival (HHMF).

The festival, which began Thursday night and ended Saturday, was born out of two years of canceled local staple music festivals due to the coronavirus pandemic: Duck Creek Log Jam and Stuart’s Opera House’s Nelsonville Music Festival (NMF), according to a previous Logan Daily News report.

The family-friendly festival saw around 1,500 attendees — 65% of whom camped — and about 20 musical acts, Stuart’s Opera House Director of Marketing and Public Relations Dylan Telerski said in an email Monday.

Attendees could be spotted, wearing their festival wristbands, throughout the weekend, heading down to browse with tourists and locals alike at the Hocking Hills Market.

Loyal NMF attendees were plentiful among HHMF’s crowd. Megan and Malcolm Meyer, of Lancaster, enjoyed a kids-free weekend at the festival, meeting up with friends who came for HHMF all the way from Michigan’s Upper Peninsula.

Half of the couple wasn’t sold on the festival, until one party realized Watchhouse, a North Carolina-based Americana/folk duo, formerly Mandolin Orange and former NMF performer, would play HHMF.

“We were missing the Nelsonville festival that has been canceled the past two years," Megan said Saturday. "And so I saw they were doing this one, and I was interested. But what convinced Malcolm to come was the band Watchhouse, which played yesterday."

The Meyers chose not to camp, as they live nearby. They said they enjoyed the festival’s “low-key” energy and smaller size. Though they hadn’t heard of most of the lineup, they enjoyed every act they’d seen, Megan said.

Like the Meyers, Taylor Ryan, of Athens, attended NMF in the past, dating back to when Lukas Nelson’s father, Willie Nelson, played. Ryan came to HHMF with his wife and two sons.

“(NMF) was an every-year family affair,” Ryan said. “I mean, we had probably a dozen or more people at NMF – we had just gotten it dialed in. And then, COVID-19. (Our) two-year-old, he was there in 2019, in my wife's belly, but then never got to go. We were pretty bummed about that.”

Ryan said that the past couple of years with NMF have been a “bummer,” and that the festival will likely never be the same, as Hocking College was currently constructing an athletic complex on the site of the concert (Robbins Crossing), the Athens News reported. Ryan added that he had a group of people he only saw once a year, each year, at NMF.

Also like Malcolm Meyer, Ryan, too, said he looked forward to seeing Watchhouse and enjoyed their set, and the festival overall.

Among the 15 food and art vendors set up by the main stage, was artist Sarah Brown, of Lancaster, who makes letterpress paper sculptures and other nature-inspired artwork through her business Questionable Press.

Like many other festival players, vendors and attendees, Brown vended at a previous NMF. As a letterpress artist, Brown uses special equipment to illustrate her paper sculptures. “Everything I make is hand-carved images," she said. "And then I pair it with handset vintage type – letterpress type.”

Brown’s detailed black-and-white illustrations of fish, turtles and more are all made in her garage. She draws inspiration from the world around her, she said, especially concentrating on the natural world of the Appalachian Mountains. Her posters are linoleum cuts, and some of her smaller works are wood-engravings.

Zero Waste Event Productions didn’t offer composting bins at HHMF, but it did offer trash and recycling. At a conveyor belt, throughout the festival Pratt-Harrington and others sorted countless bags full of waste. And as of Saturday morning, the festival had produced only two bags of trash headed for a landfill.

“Once camping leaves we will sort their recyclables out of the campground," Pratt-Harrington said. "But within the festival ground, we can kind of control what materials they use, like compostable and recyclable. So we get a diversion rate from that, and our goal is over 90%."

Telerski said in an email Monday that the property owners were very happy with the festival’s turnout and “the respect attendees showed while at the event.” Organizers from both Duck Creek Log Jam and NMF found the festival to have positive reception by artists, volunteers and attendees alike, Telerski added.

As for the future of HHMF, though it was created as a one-time event, Telerski stated organizers are open to collaborating again in the future.

“HHMF was created as an experiment and a team-effort between two festivals that had to cancel their typical festivities in both 2020 and 2021, to help bring live music back to the region in a way that is safe and enjoyable for all,” Telerski said in an email.

And as NMF is traditionally a fundraiser for Stuart's Opera House, all of Stuart’s proceeds from HHMF will “support our year-round arts education program, which serves an average of 7,000 students annually from Nelsonville and surrounding communities,” Telerski said.

Keri Johnson is a reporter for Logan Daily News.