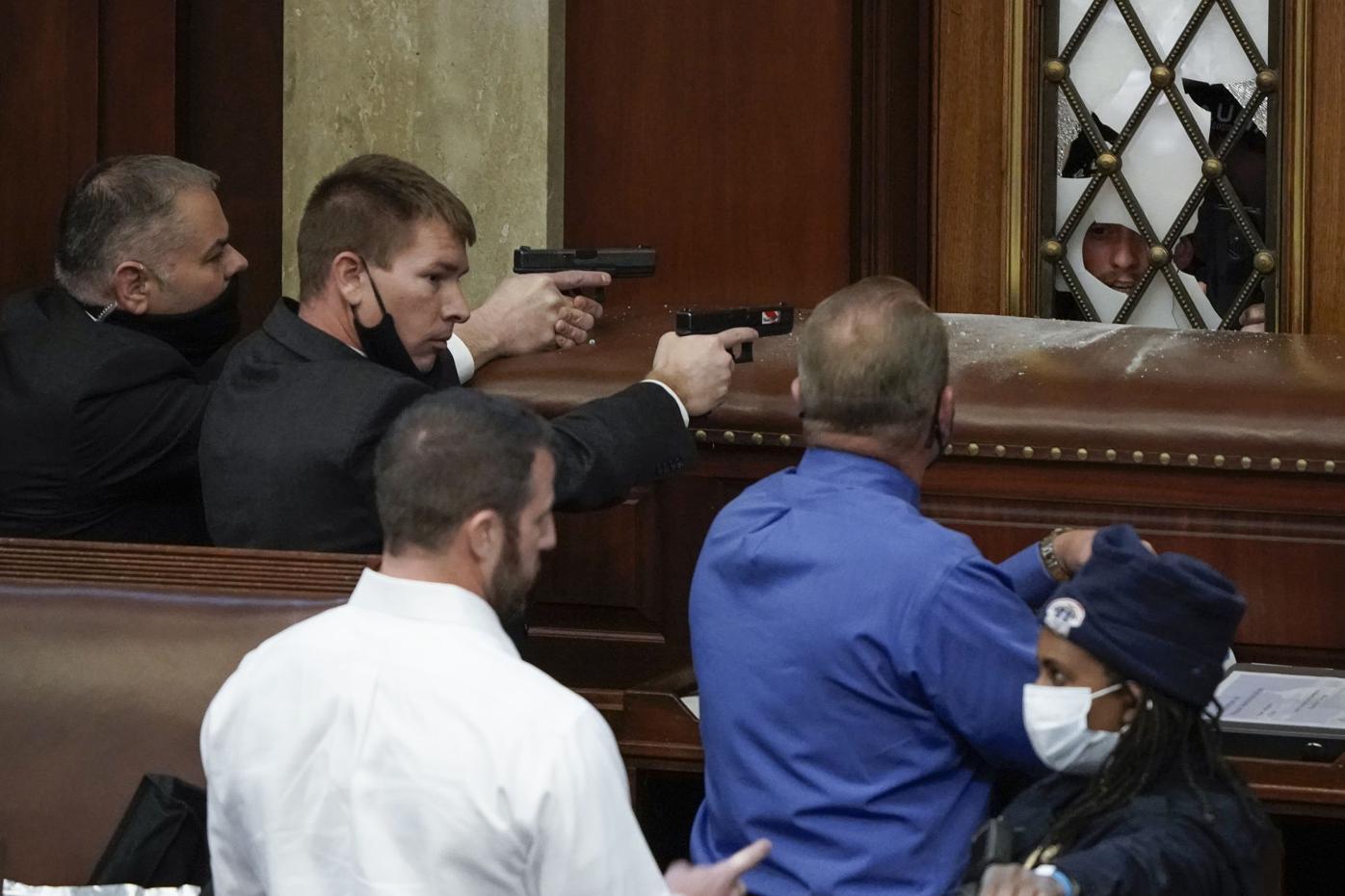 U.S. Capitol Police with guns drawn watch as protesters try to break into the House Chamber at the U.S. Capitol on Wednesday, Jan. 6, 2021, in Washington. 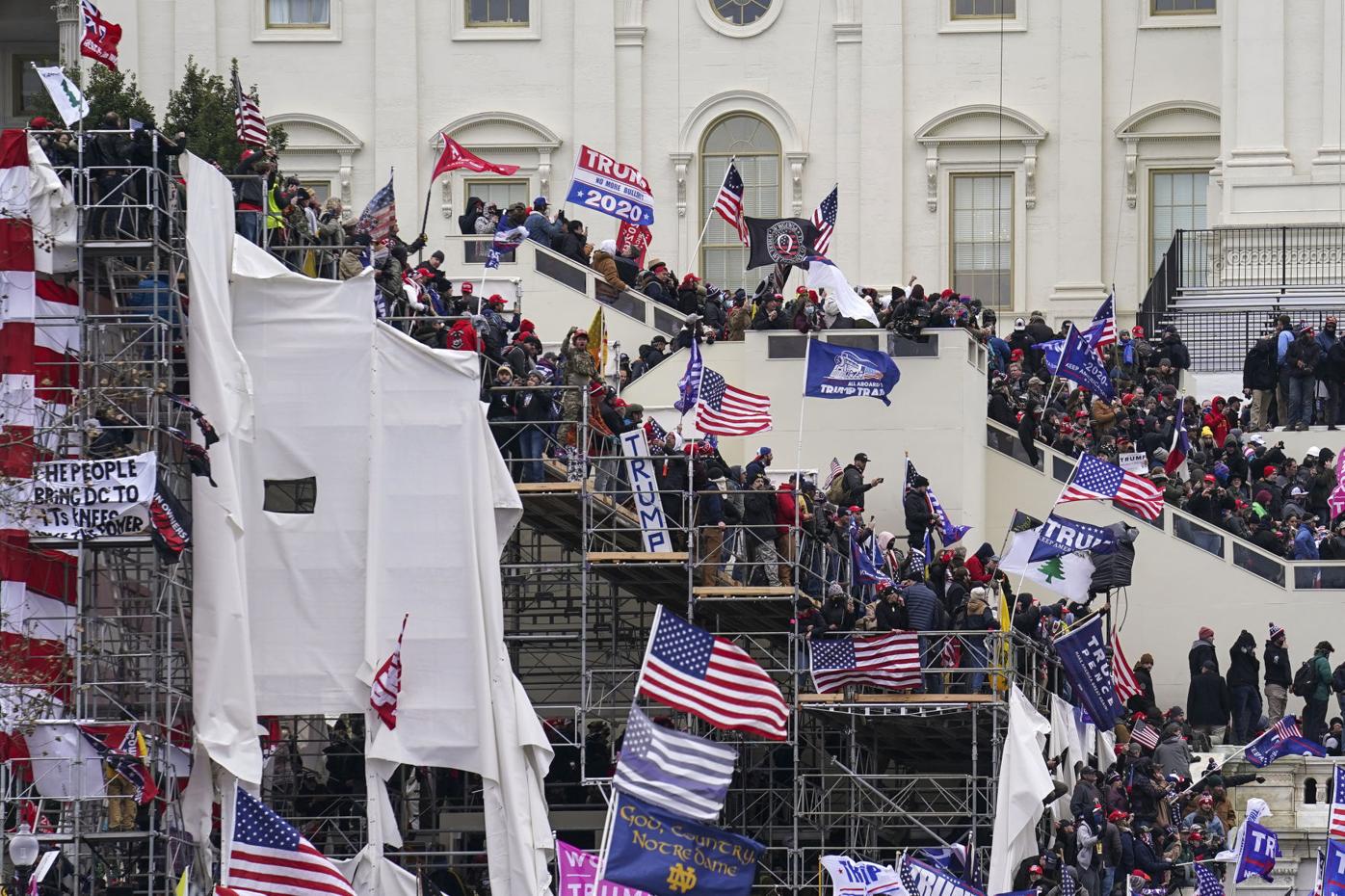 Trump supporters gather outside the Capitol, Wednesday, Jan. 6, 2021, in Washington. As Congress prepares to affirm President-elect Joe Biden’s victory, thousands of people have gathered to show their support for President Donald Trump and his claims of election fraud.

U.S. Capitol Police with guns drawn watch as protesters try to break into the House Chamber at the U.S. Capitol on Wednesday, Jan. 6, 2021, in Washington.

Trump supporters gather outside the Capitol, Wednesday, Jan. 6, 2021, in Washington. As Congress prepares to affirm President-elect Joe Biden’s victory, thousands of people have gathered to show their support for President Donald Trump and his claims of election fraud.

Jay Edwards, R-Nelsonville, who did not respond to multiple press inquiries from The Athens Messenger or Athens NEWS, denounced the violent actions on Facebook in the evening.

He compared the actions of pro-Trump rioters to the instance when Black Lives Matter demonstrators vandalized the Ohio Statehouse and spray-painted the walls.

“I said it then, and I’ll say it now, Peaceful Protests are a great thing, but rioting and looting are not,” Edwards wrote on Facebook. “It’s a crime, PERIOD. I truly hope, unlike what happened in Columbus on this video, the police are not told to stand down, and these criminals are prosecuted to the fullest extent of the law.”

Edwards continued, saying the media was unfairly characterizing a vast majority of protestors, who he said were peaceful.

Without providing any evidence, Edwards went on to claim that “Some were Antifa” among the “rioters and looters,” referencing a political protest movement characterized by militant opposition to fascism and other forms of extreme right-wing ideology.

“The fact remains, it doesn’t matter who it is, their political affiliation, etc, rioting and looting are terrible and if they commit a crime, they should be punished. Period,” Edwards wrote.

U.S. Rep. Steve Stivers, R-15, who represents a major portion of Athens County, said on Twitter on Wednesday that the behavior of the demonstrators in the capital amounted to rioting, and was unacceptable.

“Protestors have a right to be heard – a right that I’ve fought overseas for – but there is a difference between protesting and rioting,” Stivers wrote on Twitter. “Destruction and lawlessness are not acceptable.”

Stivers also called for those in Washington to remain peaceful and abide by law enforcement.

“I’m calling on everyone at the Capitol to obey the law and follow all instructions given by Capitol police and other law enforcement,” Stivers wrote.

Bill Johnson, R-6, who represents a smaller portion of Athens County, also issued a statement condemning the unprecedented spate of violence in the U.S. Capitol.

“I’m shocked and dismayed by the violence here in the Capitol,” Johnson wrote on Twitter. “This is not the way Americans solve our problems.”

Johnson announced Tuesday he was planning to object to Biden’s Electoral College certification, based on a wholly unfounded conspiracy that the Nov. 3 election was stolen, claims which have been dismissed repeatedly from federal and district courts.

Trump supporters gathered in force this week as they prepared for a “Save America” rally in the nation’s capital. Trump addressed the assembled crowd in the early afternoon, prior to the outbreak of total lawlessness.

Early Wednesday afternoon, Vice President Mike Pence said in a statement he did not have the authority to overturn the results of the Electoral College.

Rioters stormed past barricades into the U.S. Capitol on Wednesday afternoon, and breached the U.S. House chamber and forced the vote to certify President-Elect Joe Biden to be delayed.

Members of Congress were forced to shelter from the rioters, and the Capitol Building was placed under lockdown, MSNBC reported.

On Twitter, U.S. Sen. Rob Portman described the group in Washington as “violent mobs against our law enforcement and property at the @USCapitol.”

Ohio Gov. Mike DeWine also called the actions by rioters “an embarrassment to our country.”

Yost, Ohio Auditor Keith Faber, and Ohio Secretary of State Frank LaRose all strongly condemned the actions by the rioters.