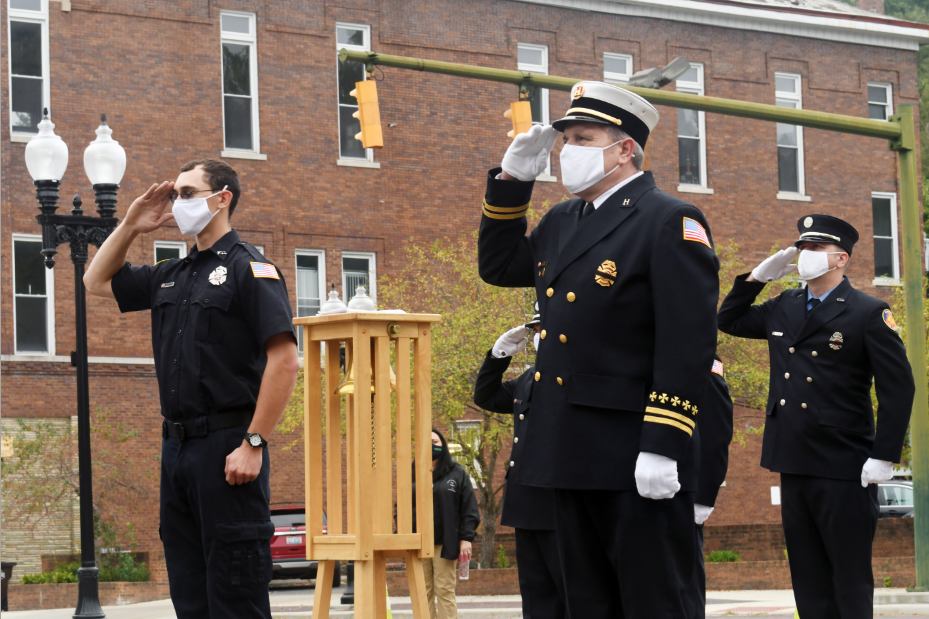 Captain Jeff Williams, second from right, and members of the Nelsonville Fire Department salute the American Flag and observe a moment of silence in honor of those who died on Sept. 11, 2001. 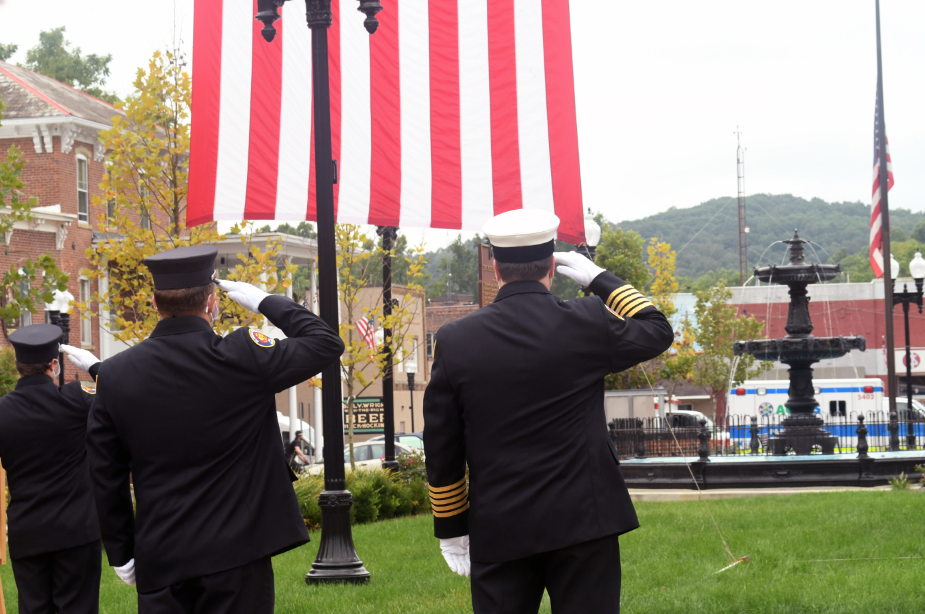 The American Flag hung in the Nelsonville Public Square from a Nelsonville Fire Department truck.

Captain Jeff Williams, second from right, and members of the Nelsonville Fire Department salute the American Flag and observe a moment of silence in honor of those who died on Sept. 11, 2001.

The American Flag hung in the Nelsonville Public Square from a Nelsonville Fire Department truck.

Emergency responders and community members stood before a larger-than-life American Flag in the Nelsonville Public Square on Friday morning, to honor those who died in the Sept. 11, 2001 terrorist attacks.

Members of the Nelsonville Fire Department, the Murray City Fire Department, Athens County Emergency Medical Services stood at attention and saluted the flag while a bell rung at the exact time each of the four planes hit.

This was the ninth year the memorial event was held in the Square, and though fewer community members attended due to COVID-19, the event was no less poignant for the members of the Nelsonville Fire Department.

“Our department had a crew at 9/11, so it’s important to keep that history alive here, and to educate the younger people coming into our department,” Nelsonville Fire Chief Harry Barber said.

When news of the attacks broke on the morning of Sept. 11, three Nelsonville Firefighters, Captain Jeff Williams, the late Chief Tim Carr and Bob Baughman headed for New York City to aid in rescue efforts.

“We loaded up everything in my van at about 9 a.m. and took off. We were kind of the last ones across the George Washington Bridge,” Williams said.

When they got to Ground Zero the view was shocking.

“I turned around and looked at the pile, it looked like a bomb went off,” Williams said.

A few weeks after, an article ran in the Columbus Dispatch about Engine 8, Ladder 2 seeking the “phantom Ohio fire captain” who helped at the scene and then disappeared. Williams contacted the Dispatch who put him in touch with Engine, 8 Ladder 2.

“I spoke with Lt. Woods and he said, ‘Get your ass back up here,’ so off I went,” Williams said. “They put me all up in their gear, made me a part of them and put me right in. They put me on a truck, I was fighting fires with them. It was amazing they brought me in like that. That’s what we do.”

Throughout that year, Williams went back seven times. The year after he went another “four or five times.” He now visits every year, usually on the anniversary. With the pandemic going on, Williams stayed in Nelsonville for this anniversary, but he and Barber plan to go to NYC next year for the 20th-anniversary memorial.

According to Barber, the connection with the firefighters in NYC has increased over the years.

“It definitely built a stronger bond. It’s thousands of miles away, but it created a friendship and a family that I would have never thought possible until that happened,” Barber said.

Members of the Nelsonville Fire Department take trips to visit NYC, including introducing younger firefighters to the department, and members of Engine 8, Ladder 2 come to Nelsonville during the hunting season.

The bond between departments is especially important considering the dwindling number of survivors from the attacks. Due to complications from exposure to asbestos, ash, smoke and other toxic substances which were airborne in the first three days of recovery efforts, many first responders and survivors have had medical issues. In addition, many have died from suicide due to Post Traumatic Stress Disorder.

“Just on my crew there were two of us that got cancer or had something wrong with our bodies,” Williams said.

Both men agreed that memorials like the one in Nelsonville serve as a way to ensure that those who died during the attacks or have since died from related health complications will not be forgotten.

“In my department in particular I have 19 and 20-year-old firefighters who were babies when this took place, so they have no memory of when this took place,” Barber said. “So it’s up to us who were here, and those who were there during 911 who were working, doing the job, to keep that tradition going – to keep that memory going. It’s all about tradition and honor in the fire service, so it’s up to us older firefighters.”