Lois Whealey, right, of Athens, who opposes oil and gas leasing in the Wayne National Forest, stays behind in what was once a crowded room to fill out a public comment form. The U.S. Bureau of Land Management cut short an open house Wednesday at the Athens Community Center after protesters interrupted. 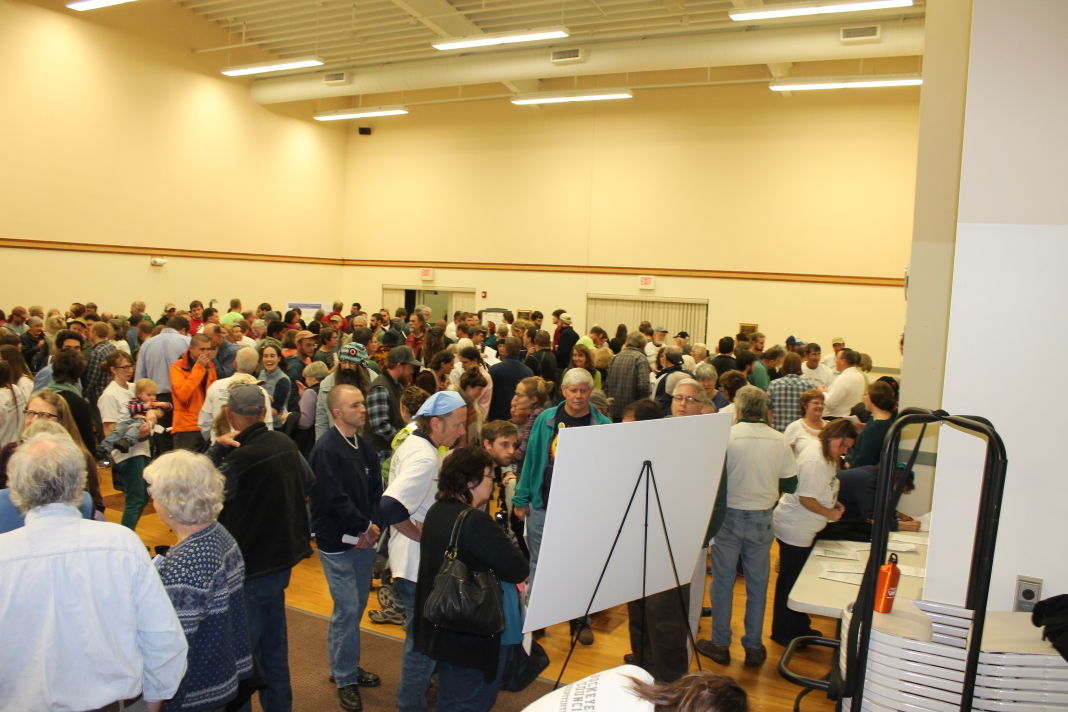 The first 45 minutes of an Athens open house was uneventful as audience members check out the information booths staffed by employees of the U.S. Bureau of Land Management and U.S. Forest Service. 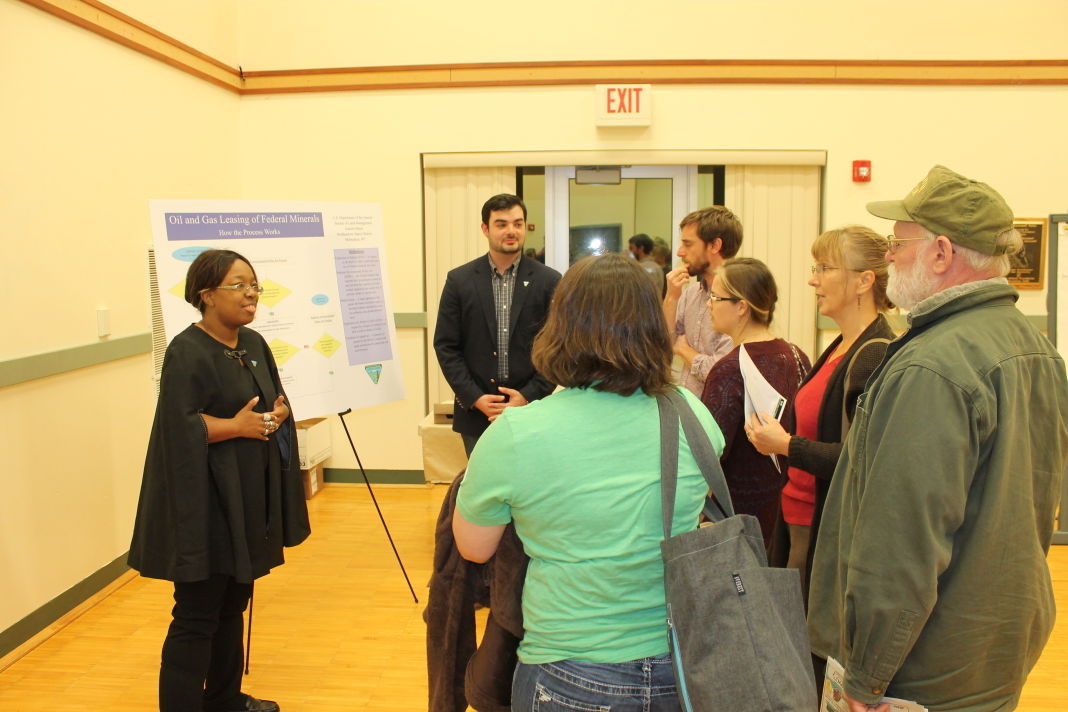 Lois Whealey, right, of Athens, who opposes oil and gas leasing in the Wayne National Forest, stays behind in what was once a crowded room to fill out a public comment form. The U.S. Bureau of Land Management cut short an open house Wednesday at the Athens Community Center after protesters interrupted.

The first 45 minutes of an Athens open house was uneventful as audience members check out the information booths staffed by employees of the U.S. Bureau of Land Management and U.S. Forest Service.

An open house Wednesday on possible leasing of federal oil and gas rights in the Wayne National Forest was cut short when protesters started chanting “We say no!” and a smaller group countered with “We want jobs!”

The open house was held at the Athens Community Center by the U.S. Bureau of Land Management and included several booths where people could get information. It was slated to last two hours, but was called to a halt an hour and 15 minutes early after the chanting persisted.

Under consideration is the leasing of 31,900 acres of the Wayne National Forest for oil and gas exploration. Of that, 3,150 acres is in the Wayne’s Athens Unit, including federally owned mineral rights in Athens County’s York Twp.

More than 150 people attended the open house, and spent the first part of the evening visiting the information booths, where they could fill out public comment forms.

Dean Gettinger of the Bureau of Land Management then gave what he said would be a brief presentation, which he started by saying that the purpose of the open house was to explain the BLM leasing process. That process includes the U.S. Forest Service determining if the proposed leasing complies with the Wayne’s forest plan. If the Forest Service rules that it does, then an environmental assessment would be done. A decision would then be made to lease, not lease or do a more detailed environmental impact statement.

“There are going to be a lot of opportunities for the public to participate in the process,” Gettinger said, which prompted catcalls of “Right!” and “Sure!” from the audience.

Some audience members said they had come to the meeting thinking they would be able to give testimony, with one complaining that he thought the open house format was an attempt to manage to audience.

Things started going awry when the audience was told that questions would not be taken from the audience as a group, but that people could go to the booths to get responses to their questions.

Whether it was spontaneous or planned, members of the audience started shouting “what do we say” questions about such things as fracking in the Wayne, transporting frack waste on the Ohio River and putting waste into injection wells. Audience members would shout back “We say no!”

While chants of “We say no!” continued, a smaller group of lease supporters shouted “It’s our property,” “Keep your hands off our property” and “We want jobs!”

The audience was warned that the meeting would be shut down if the atmosphere did not stay civil. The open house started at 6:30 p.m. and the BLM pulled the plug at 7:15 p.m.

Although the leasing would involve only federally owned mineral rights, private property owners and owners of mineral rights under the Wayne could benefit if the decision is made to allow it, according to Becky Clutter of the pro-leasing group Landowners for Energy Access and Safe Exploration (LEASE).

“The forest is preventing property owners from accessing their minerals,” Clutter said.

If Wayne National Forest mineral rights remain off limits, it can block adjacent property owners from leasing their minerals because the privately owned parcels are not large enough to support horizontal drilling, she explained. The same can be true for people who own mineral rights under the Wayne that are adjacent to non-leased federally owned mineral rights, said Clutter, who was at Wednesday’s meeting.

“We’re just asking the BLM to look at it from a landowner’s perspective,” said Clutter, who is from Monroe County. “It’s become a private landowner issue.”

Peggy Gish of Athens County said she opposes the leasing.

“I think that it’s very important that we don’t develop the Wayne National Forest for the energy companies,” Gish said, adding that she wants to see the Wayne stay in its natural state.

Gish said wealth produced from oil and gas production in the Wayne will go to the energy companies.

“The wealth isn’t going to the local community,” she said, adding that she believes the number of jobs created would be fewer than some people think and would not be long-lasting jobs.

Lois Whealey of Athens said one of her concerns is that leasing Wayne oil and gas rights will produce more fracking waste to be disposed of in injection wells, including injection wells in Athens County.

Roxanne Groff, a member of the Athens County Fracking Action Network, said the issue is not about just protecting trees, but also protecting health and groundwater. She called on the U.S. Forest Service to put a halt to the leasing process by not giving consent for the BML to move forward.

“We want the process to stop now,” Groff said. “They have enough information from the public to say no now.”