About 50 Ohio University faculty protesters lined the walls behind regular attendees of the O.U. Board of Trustees January meeting. 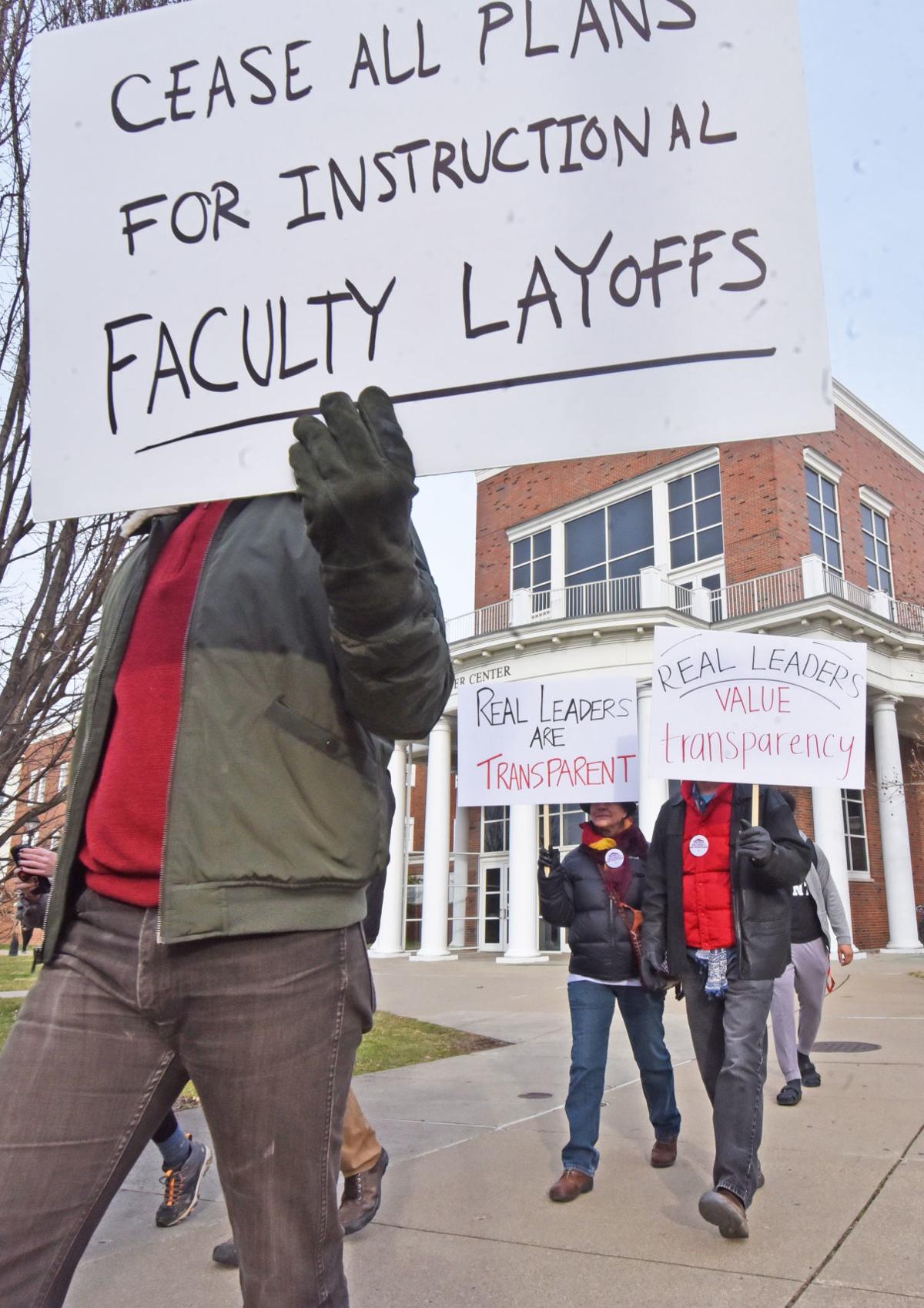 Faculty and staff of Ohio University marched in silent protest to the January Board of Trustees meeting, hoping to have their messages heard.

About 50 Ohio University faculty protesters lined the walls behind regular attendees of the O.U. Board of Trustees January meeting.

Faculty and staff of Ohio University marched in silent protest to the January Board of Trustees meeting, hoping to have their messages heard.

The Ohio University Board of Trustees met Thursday and Friday, Jan. 16-17 and used the meetings to vote approval of several capital projects, as well as discuss the university’s financial status.

Over the past few months, OU faculty, staff and students have voiced alarm that more work seems to be assigned to professors, but few faculty members have been hired recently, especially for tenured positions. Faculty and staff, especially members of Ohio University’s chapter of the American Association of University Professors, have voiced discontent that the number of administrators on OU’s rolls continue to rise, and outnumber faculty.

The concern from professors has resulted in growing rumors, both unsubstantiated and founded, of deep faculty cuts. The college of Arts and Sciences is expected to lose between 30-50 faculty jobs, which could gut an entire program. Professors have publicly discussed the possibility of unionizing or organizing walkouts if OU administration remains unreceptive of the faculty’s concerns.

Classified staff have already formed a union, but have not been recognized by the university. A statement from OU’s director of employee and labor relations, Michael Courtney, stated that the request for recognition from OU’s administrators of the classified union was denied as it did not meet the “minimum requirements for seeking voluntary recognition outlined in the Ohio Revised Code.”

In response to the Board of Trustees Friday morning meeting, OU-AAUP staged a silent protest of the discussion of budgetary matters.

Associate professor in sociology Ted Welser was quoted in a OU-AAUP press release discussing the protest.

“OU executive leadership have failed everyone but themselves,” Welser said. “OU execs created the fiscal crisis by increasing their own pay by $2.8 million every year over the last four years, resulting in overcharging students and cutting staff and faculty.”

At least 50 faculty members from across colleges attended the silent protest.

“Once again, we heard that any ‘belt-tightening’ is being variably applied,” said OU-AAUP communications director Jennifer Fredette in a statement to The Messenger. “President Nellis sent an email yesterday (Thursday, Jan. 16) talking about the ‘tactical elimination of most open positions among faculty and staff,’ but started off his report by talking about administrative positions that need to be filled.”

At previous protests, professors noted that they have been given more classes, both online and in brick-and-mortar classrooms, without associated salary raises and without adding staff to help facilitate the increased class load.

OU-AAUP asked for three things of OU’s administration in letter sent in early December: for the university to instruct deans to cease plans for faculty layoffs; to immediately and publicly announce a commitment to retain faculty; and to publicly commit to the protection of academics by requiring budget cuts to have a greater share from units not directly supporting academics.

On Thursday, the Ohio University Board of Trustees were given a comprehensive update of the institution’s financial position and were told not to worry.

“We are not in a period of crisis,” OU’s senior vice president for finance and administration Deb Shaffer said. “The crisis comes if we don’t make change… We are in an incredibly strong financial position.”

Shaffer pointed out that the university is taking action to keep pace with changes in higher education. For fiscal year 2020, the Trustees approved the use of $26 million in reserves for operations, though the university forecasts to use about $14 million. Though that number may change slightly, Shaffer said the “primary driver” of that estimated variance is that the university is critically assessing all of its open positions.

“We have a hiring committee — the president, myself and the provost — that looks at every single position to make sure it’s absolutely critical to add it back in,” she said.

With regard to the university’s undergraduate enrollment, current data shows fall 2019 enrollment at 33,057, which includes all locations and online students. This is a decrease of 5.2 percent — about 1,827 students.

OU’s College of Business Dean Hugh Sherman said the decline in enrollment is not unique to Ohio University, but a common problem institutions are facing due to College Credit Plus, which allows high school students to take college-level courses and earn credits. Some of these students end up starting this program at their local community college and continue there for the duration of their education.

Sherman said graduate enrollment is steadily growing, particularly in the health and computer sciences fields. However, due to an increase in online graduate degrees, he said the university has to be attentive to how their own programs may change.

“We’re taking action toward cautious but sure growth, if we can find it,” he said.

While a traditional master’s degree may come with a price tag of $30,000, online options run closer to $10,000. Trustee President Dave Scholl was curious about the difference between the two.

In response, Sherman noted that the College of Business strives to innovate and offer its students quality faculty and technology. He also said the college has strong, reliable relationships with employers around the world who are invested in Ohio University students’ success.

The Trustees considered four consent resolutions regarding academics, including the abolishment of the Heritage College of Osteopathic Medicine’s (HCOM) Geriatric Medicine department.

HCOM Associate Dean Wayne Carlsen, D.O., explained that while the field of geriatric medicine is crucial, it is not in the university’s best interest to continue the program. Due to the increased demand for geriatric doctors, securing faculty is more difficult.

“In order for us to be successful we’d have to increase base pay by $100,000 for each faculty member, in my opinion,” he said, noting that the university searched for faculty for five years before considering this option.

The Board was also updated on the academic success of the university’s athletes. The department reported an 89 percent graduation success rate among student athletes and an average cumulative GPA of 3.2.

Six capital projects were approved by the Board’s Resources, Facilities and Affordability Committee during Thursday’s meeting. The estimated costs of each combined total more than $12 million.

The approved projects are: