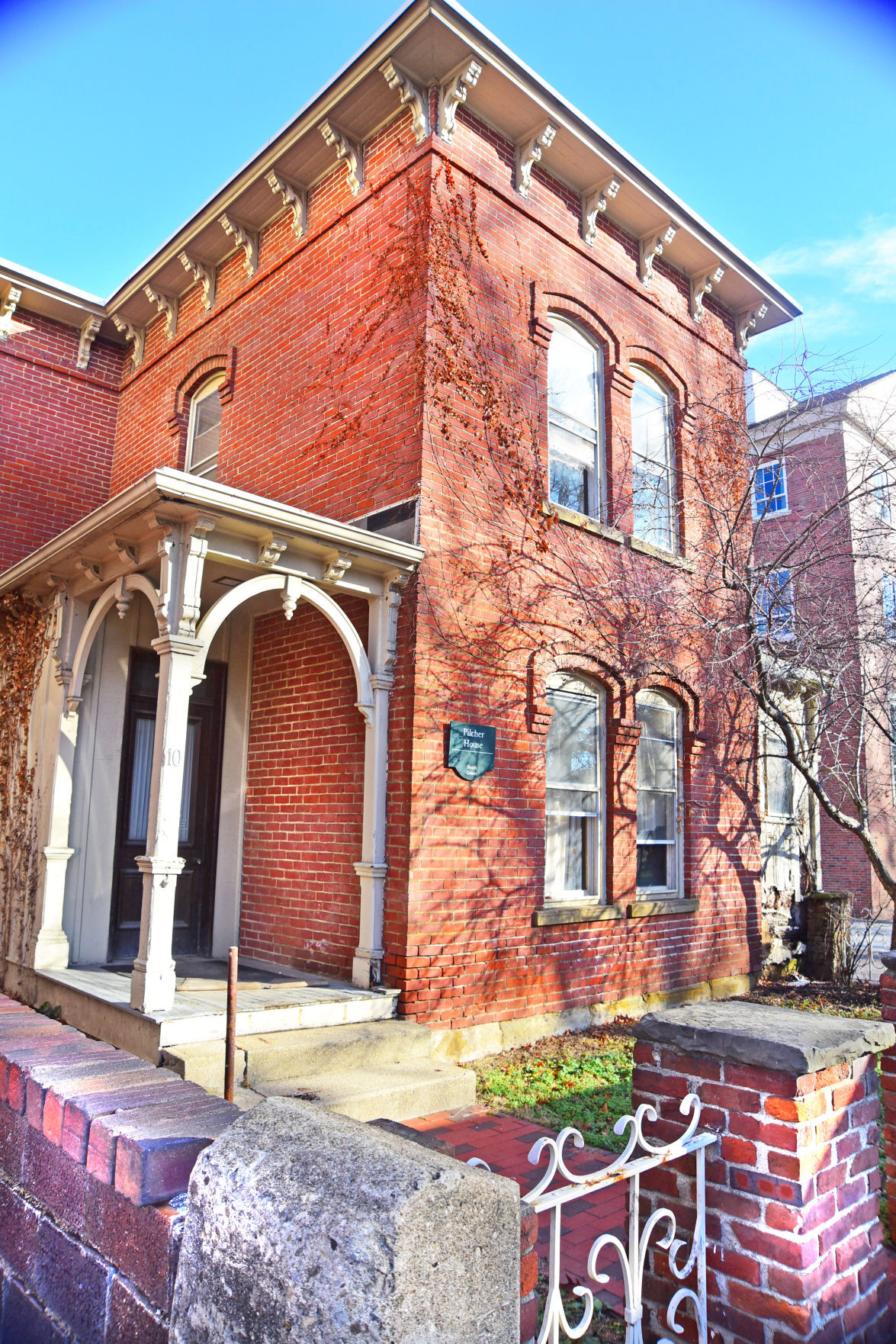 The current state of the Pilcher House, located at 10 E. Union St., Athens. 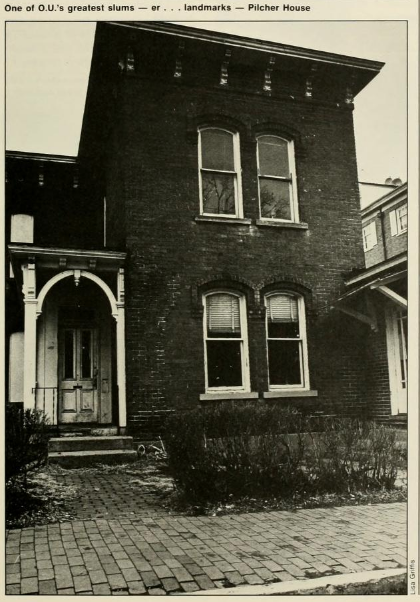 This photo was taken for the Spectrum Green yearbook in 1980 by Lisa Griffis. 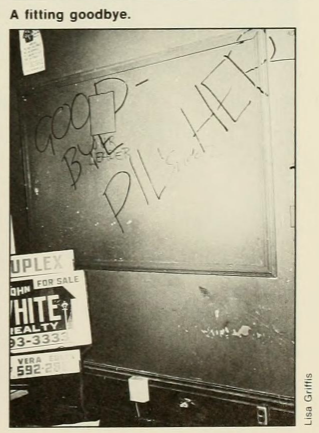 “Good-bye Pilcher,” this graffiti proclaimed. This photograph was taken in 1980 by Lisa Griffis for Spectrum Green yearbook.

The current state of the Pilcher House, located at 10 E. Union St., Athens.

This photo was taken for the Spectrum Green yearbook in 1980 by Lisa Griffis.

“Good-bye Pilcher,” this graffiti proclaimed. This photograph was taken in 1980 by Lisa Griffis for Spectrum Green yearbook.

A small parcel at 10 E. Union St. has long been the site of the Pilcher House, but with no current occupancy, the building is scheduled for sale.

The building is owned by Ohio University, and according to an article published in the Tuesday, March 30, 1975 edition of the Athens Messenger, was added to the list of historically important buildings and sites in Ohio.

During the March 2019 Board of Trustees meeting, a vote was held regarding several of the university’s real estate parcels. The vote included approval of $1.5 million in renovations for the Trisolini House (48 E. Union St.) to convert it into administrative offices for Culinary Services; demolition of the Brown House (2 University Terrace), due to its deteriorated condition; and the eventual sale of the Pilcher House.

This is not the first time the building has been looked at as a possible cost-saving measure for the university. In 1975, the University’s Trustees were seeking to stabilize the main campus through various methods, including hoping that state aid would “bail the university out of its deep hole of debts and keep it operating smoothly until enrollment is bolstered by new programs designed to make the institution financially sound again.”

As part of that plan, a few capital improvements were discussed. The university’s officials were said to be considering razing “the botany lab near Grover Center, Brown House on University Terrace, the Edgehill office building on East Union Street, the foundry and glass blowing buildings near the administrative annex, McKee House and German House on University Terrace, Pilcher House, a facility at 58 Stewart Street and Super Hall.” Some of the buildings were in use at the time, including the Pilcher House.

While The Post and other student publications were housed in the Pilcher House, it appears that students decided the dilapidated building was going to torn down, and their conduct in the building was not the most civilized.

An article in the 1980 Spectrum Green noted that the student journalists had “left a house whose walls were (where they were still standing) plastered with graffiti, ceilings were falling in, furniture was torn, burned, broken and stolen, and trash old newspapers and yearbooks were, well, everywhere. It looked as if a party had been carried on there continuously for six years.”

The auction is styled as a sealed bid auction for the commercial property, which only has about 0.8 acres of land included.

The Pilcher House has been in a state of disrepair for some time. The university has characterized it as requiring “significant deferred maintenance.” The structure was built in the 1800s, and has been used as a home as well as an office for insurance and legal services.

In the 1970s, it was home to The Post, OU’s student newspaper, as well as the offices of the Athenian OU yearbook. It’s also been home to the offices of the University Judiciaries, Legal Affairs, the Curriculum Council and Faculty Senate.

In August 1997, the building was emptied of its judiciary tenants. In July 2011, the Curriculum Council and Faculty Senate moved to Alden Library, and in October of that year, the Legal Affairs’ offices moved to Lindley Hall, and now are located in the West Union Street Office Center.

The building was named in honor of Thomas Murray Drake Pilcher, born in the Athens area during 1832. He was a cabinet-maker apprentice when he was 16, but later joined in on defense efforts. He assisted in recruiting Company H, Seventy-Fifth Ohio Volunteer Infantry, of which he was elected captain.

Later, he was forced to resign due to ill health. However, he then became superintendent of the Herrold Coal Mine, located at the mouth of Monday Creek.

OU has included deed restrictions in the bid requirements, so as to ensure the building is “in line with the campus character.”