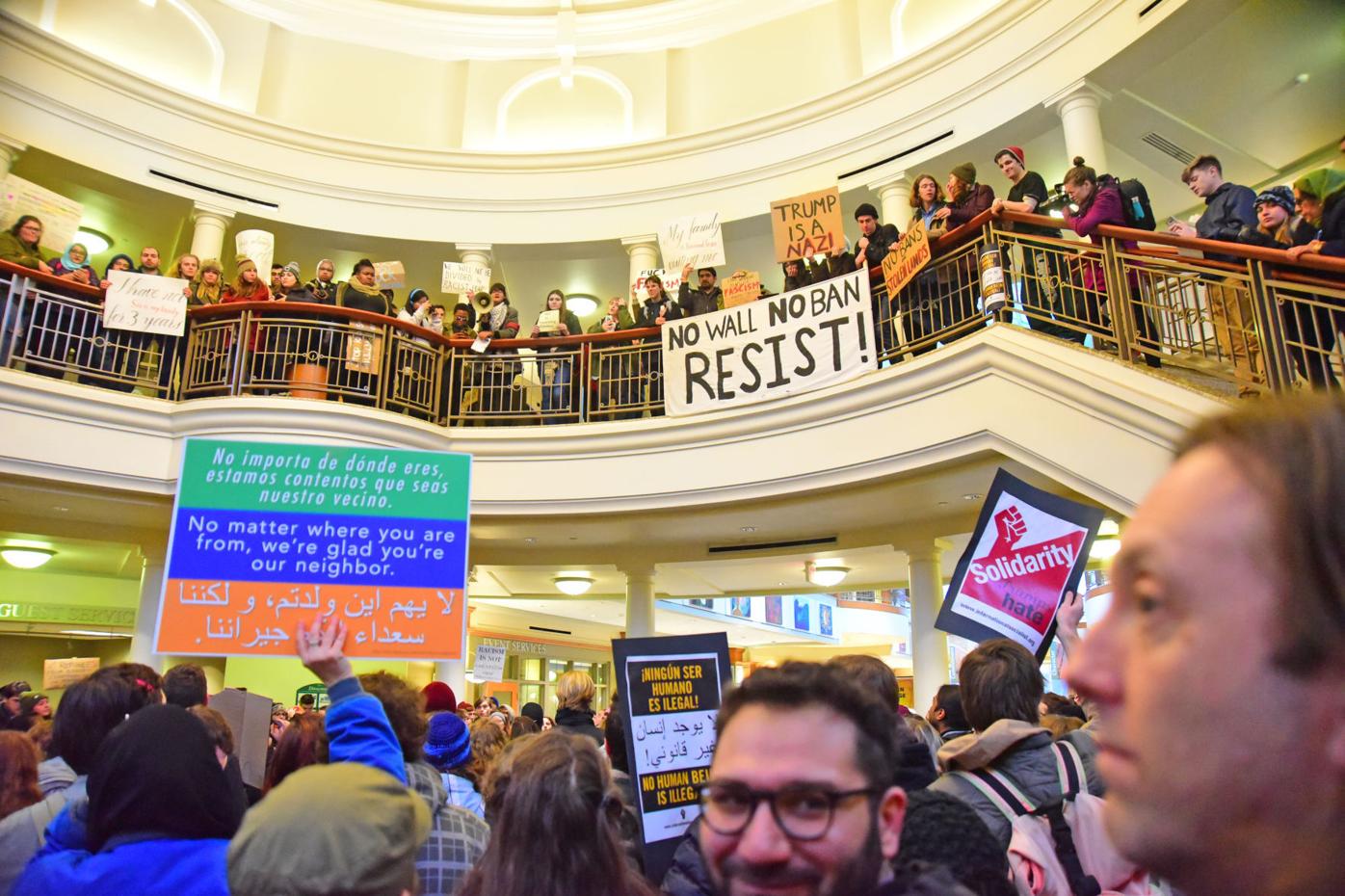 On Wednesday, about 200 people gathered in Ohio University’s Baker Center to stage a sit-in protest demanding the Ohio University administration make the university a sanctuary campus. Seventy people were arrested later that night. 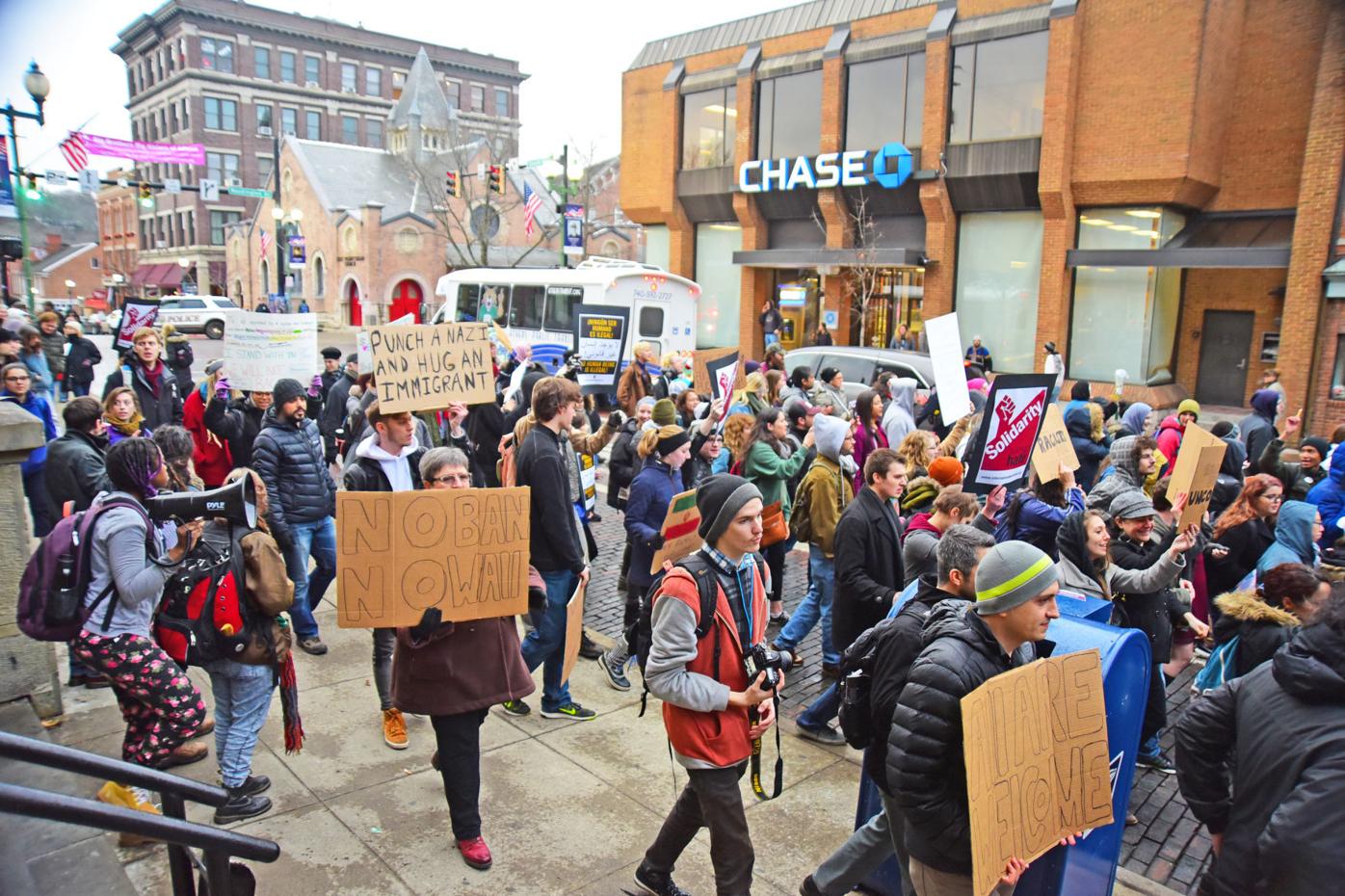 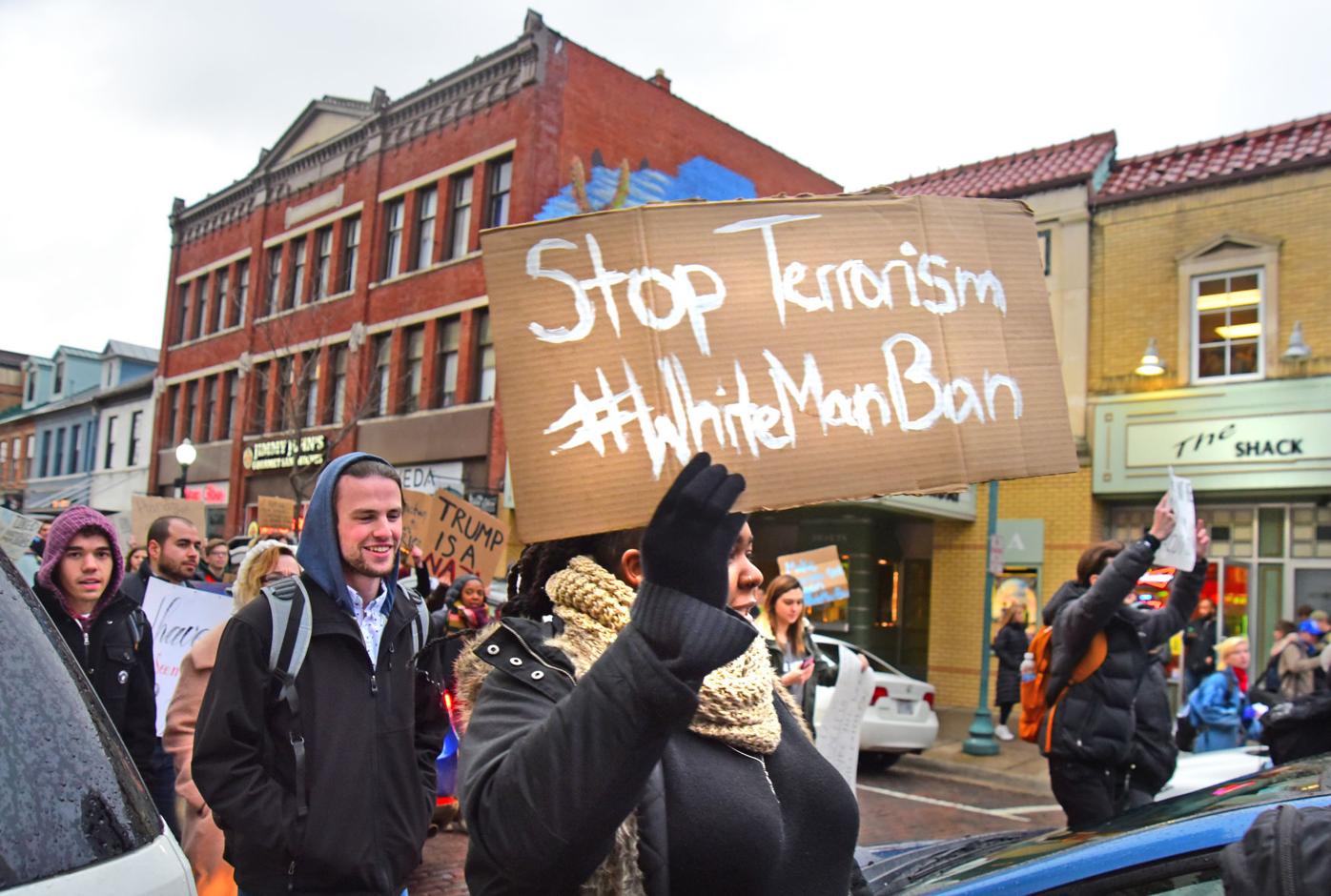 A demonstrator holds up a sign as a group of demonstrators move through traffic on Court Street toward Baker Center.

On Wednesday, about 200 people gathered in Ohio University’s Baker Center to stage a sit-in protest demanding the Ohio University administration make the university a sanctuary campus. Seventy people were arrested later that night.

A demonstrator holds up a sign as a group of demonstrators move through traffic on Court Street toward Baker Center.

A demonstration protesting President Donald Trump’s travel ban and border wall began in front of the Athens County Courthouse at 4 p.m. on Wednesday. About 300 people gathered in front of the courthouse, many holding signs, and joining in chants in between speakers.

Several of the protesters were students, many of whom were the same students who stood in front of Baker Center on Monday holding signs protesting the travel ban of seven predominantly Muslim countries — Iran, Iraq, Sudan, Somalia, Yemen, Libya and Syria. Many of those students who stood outside Baker Center on Monday and joined in Wednesday’s protest at the courthouse were personally affected by the ban.

Some from the Ohio University community have voiced their desire to make the university a sanctuary campus prior to Wednesday’s demonstration. A sanctuary campus would protect undocumented faculty and students.

Some demonstrators left after the group moved to Baker, but were eventually replaced with a few others who gradually arrived to the sit-in.

One of the demonstrators present at both the courthouse and the Baker Center sit-in was Gabriela Godinez Feregrino, a junior studying integrated media at Ohio University. Feregrino spoke at the courthouse, sharing her story as an immigrant born in Mexico and raised in the United States.

When Feregrino was 9 years old, she told the crowd, a girl told her that she wasn’t an American while they sang a patriotic song. She said she can excuse a 9-year-old girl for that kind of treatment, but she can’t excuse adults for doing the same.

In her speech, Feregrino pushed the crowd to have conversations with people who they don’t agree with and try to understand each others’ pain. She also said she pities those “who don’t understand how to love each other.”

Others who spoke at the courthouse and at Baker Center had a similar message as Feregrino, pushing their fellow demonstrators to reach out and talk to others. The demonstration also took a pause from speakers to allow time for conversation among one another.

Powers then addressed the demonstrators at 7:24 p.m., telling them that they had until 7:30 p.m. to move to a room on the second floor where they could continue their sit-in or else they would start arresting demonstrators.

The demonstrators, who were previously spread out around the lobby area, moved into a closer, tight-knit circle in the middle of the floor, which left more room on the outside of the circle for pedestrian traffic, and locked arms with each other. Several people still remained standing around the walls of the room.

“With safety and security at the forefront of all concerned, OUPD and university administration worked together to arrange an alternate space for protestors to gather that would protect students, faculty and staff,” read a statement released from Ohio University in response to Wednesday’s demonstration. “In addition, alternate space allocated would not block ingress and egress from Baker Center and would allow for university operations to continue uninterrupted.”

In a separate statement provided by the OUPD, it said that the police department worked with Baker Center staff to secure a room for the demonstrators and didn’t mention the university administration.

It was almost 8 p.m. before arrests were made. Several OUPD as well as other local law enforcement officers circled the demonstrators minutes prior, telling people in the room, including members of the media, that they had to leave the area or else risk arrest.

Those who left went outside of Baker Center and watched through closed doors as the cops began arresting the remaining demonstrators. Many demonstrators left the circle inside and joined the demonstrators outside.

After most of the people inside had either left or were arrested, the police moved outside to keep the demonstrators away from the doors. Many began chanting and yelling at the police officers.

Powers said that about 70 people were arrested for criminal trespass and were kept in the Baker Ballroom.

“Protestors were informed repeatedly that they were impacting operations, egress and creating a safety issue,” the university’s statement read, although there were clear pathways made by the sit-in demonstrators for pedestrians to walk through and exit the building.

When asked about why they were arrested for criminal trespassing in a space open to students and the public, Powers said it was not a meeting space but a transient space. If an emergency were to occur with the demonstrators sitting there, it could have created “chaos.”

Powers said OUPD has the right to restrict demonstrations like this according to time, place and manner.

According to a statement released by the OUPD, none of the demonstrators resisted arrest and no one was injured.

“Those who were arrested were charged with criminal trespass, a fourth degree misdemeanor, and released on their own recognizance,” it read.

Two years ago, a sit-in demonstration took place in the same space in Baker Center, during which administration members came and spoke with the demonstrators, no arrests were made and the demonstrators were allowed to stay in Baker past its closing hours.

Powers said demonstrations like Wednesday’s and the one two years ago are handled on a case-by-case basis.

In Ohio University’s response, “disruption of university operations is unlawful.” Administration members did not speak with the demonstrators at Wednesday’s protest.

Wednesday’s protest is one of many #NoWallNoBan protests that have been happening throughout the country.