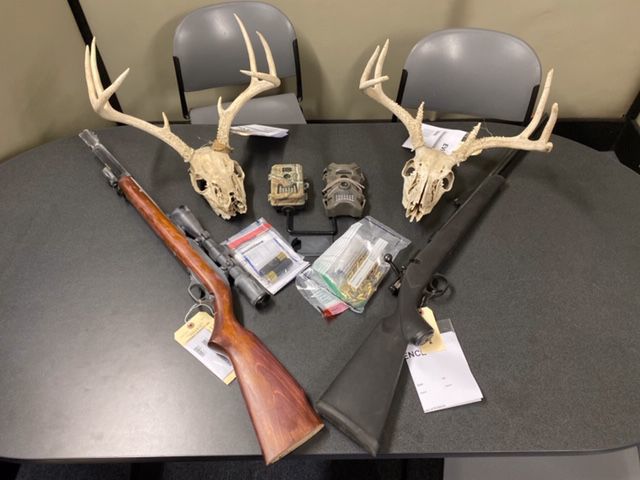 Pictured are items taken from the Baker Road residence.

Note: This story appears in the Tuesday, Dec. 3 newspaper on Page A1.

ALBANY — A slew of charges have been leveled against mainly unnamed individuals after a search warrant was executed at a Baker Road residence in the Albany area on Sunday by the Athens County Sheriff’s Office.

All of the charges centered around alleged contraband, firearms, poached wildlife and trespassing, according to the Office’s press release.

Officers with the Athens County Sheriff’s Office Criminal Interdiction Unit, the Special Response team and Ohio Division of Natural Resources’ Division of Wildlife searched a Baker Road residence Sunday on a warrant after numerous neighbors reported the dwelling’s residents of suspected wildlife poaching over a course of several weeks.

Sheriff’s deputies discovered a male living at the residence in possession of a firearm, of which he should not have had any, as he has a prior felony of domestic violence on his record, disqualifying him from firearm ownership.

That man, Brenton Welsh, was arrested and transported to the Southeastern Regional Jail for parole violation.

While deputies were executing the search warrant, a male and female were located inside the residence. No names or other identifying information was provided in the release.

Additional suspects are also expected to be charged, with the expected charges to include: