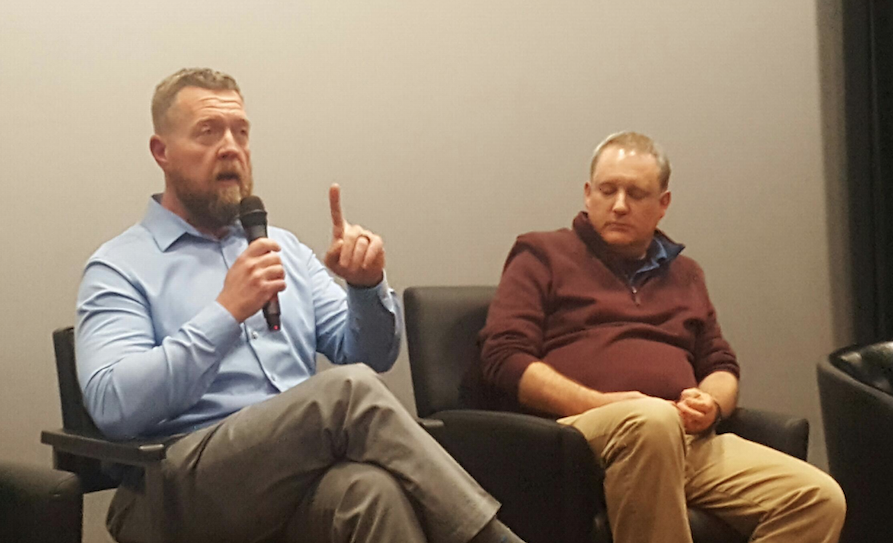 Athens Police Chief Tom Pyle (on left) answered questions about his department’s police training and use of force conduct policy. 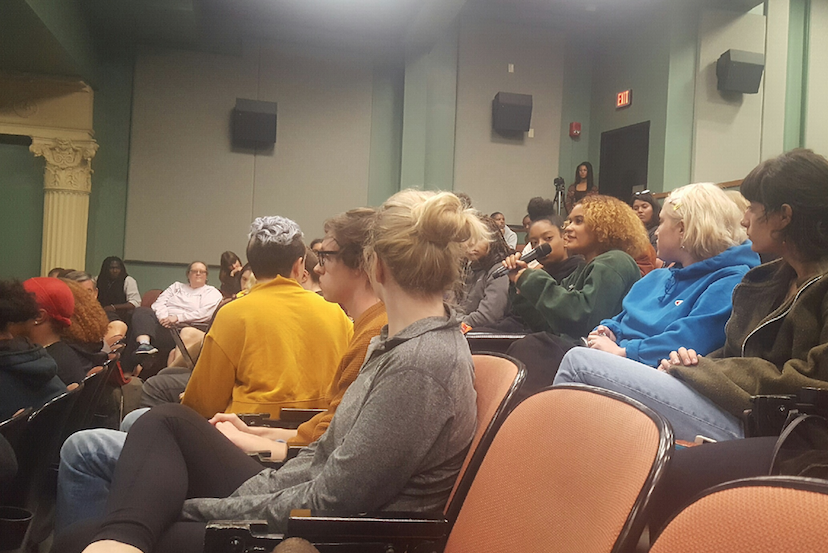 Many in the audience asked pointed questions to the police chiefs on stage. 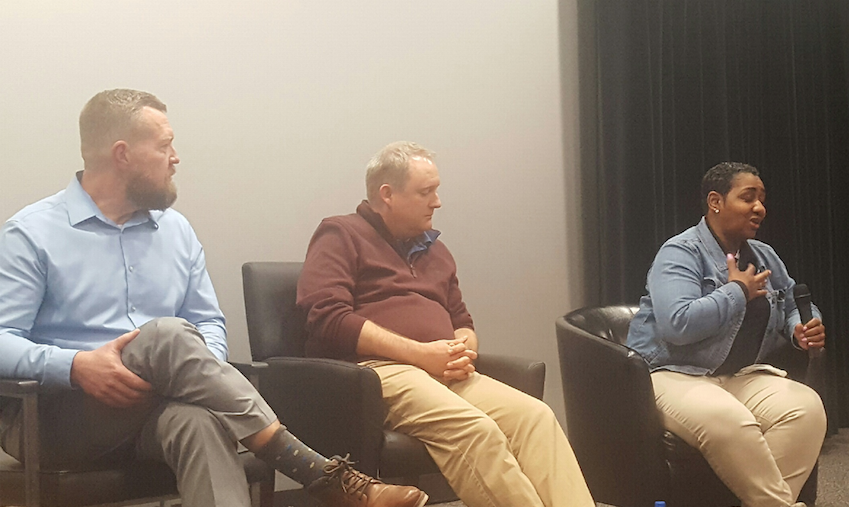 Athens Police Chief Tom Pyle (on left) answered questions about his department’s police training and use of force conduct policy.

Many in the audience asked pointed questions to the police chiefs on stage.

Note: This story appears in the Thursday, Oct. 10 newspaper on Page A1.

Around the theater went the microphone, amplifying lifetimes of experiences and pain.

A mother spoke of feeling targeted after being pulled over several times by police. An Ohio University student described being uncomfortable whenever an officer approaches.

A two-time OU graduate said they knew the suspect while working at a YMCA in Columbus. Then a boy, Ty Bealer liked soccer and detested curse words.

This opportunity to speak came at Tuesday's “Ask the Chiefs” forum at the Athena Cinema, which was held in response to Bealer’s arrest on Court Street two weekends ago. Police allege a bar’s staff alerted them to 22-year-old Bealer, of Columbus, causing a disturbance and that he did not comply with officers’ orders. An OU student filmed two officers pinning Bealer to the ground, one at his feet and another keeping his head down, while a third worked to handcuff him.

Some contend the police used excessive force and targeted Bealer because of his race. For several hours on Wednesday, attendees had a chance to ask Athens Police Chief Tom Pyle about this specific incident and about broader concerns of police training and implicit racial biases.

Chief Pyle walked a tightrope on stage to balance a number of factors at play. Pyle listened to pointed criticism about his officers’ conduct, but said he could not discuss the incident in much detail so as to not contaminate the accused’s right to a fair trial. He strove to show a sincere recognition of racial history involving law enforcement and minority communities, while conceding his department employs no officers of color and also maintaining his view that this arrest was not racially motivated, based on known evidence.

He answered to skepticism of his department’s use of force tactics, while defending its record of 269 reported incidents since 2007 without a formal complaint from any suspect involved.

In sum, the forum teetered between a deep, serious discussion of race relations and a group talk casual enough that participants were offered popcorn on their way into the theatre.

“I’m here because I want to be here,” Pyle said early on. “I want to be part of the healing process.”

Pyle was joined on stage by two other police chiefs — Andrew Powers of the Ohio University Police Department and Tiffany Tims of the Hocking College Police Department. Their perspectives were interspersed between the evening’s lengthier exchanges involving Pyle and the audience.

Tims, who is African-American, noted her own experiences with discrimination while on the force. She was the target of numerous social media attacks and threats by a white Nelsonville police officer in 2017 and 2018. The officer was later fired for his conduct.

Tims said Chiefs Pyle and Powers supported her throughout that ordeal, and that she wanted to support them in appearing at this forum.

Most in the crowd expressed a desire to make the Athens Police Department better and improve relations between law enforcement and civilians. Among the main takeaways were a need for improved (and more frequent) officer training; recruitment toward a more diverse police force; and more transparency to build community trust in law enforcement.

Two things were clear: first, that Tuesday’s event should not end this dialogue. Both attendees and the chiefs themselves expressed a desire to continue hosting similar events and keeping this communication active.

Secondly, that demonstrative action must take place beyond just this important rhetoric. To that end, Pyle pointed to his department’s ongoing efforts to track the race and gender of all local traffic stops to determine if there are any biases or trends of note. He also noted his officers will soon be wearing body cameras while on patrol which will lead to increased accountability.

Details of the arrest

Pyle outlined in detail the incident in question, saying he could only mention what is publicly known.

He said his officers were conducting a bar check elsewhere on Court Street when they received a call from The J Bar staff reporting an individual was causing trouble. They gave officers a description, but police initially could not find the person.

Police allege this is because the man, identified later as Bealer, had changed shirts. Pyle has said this shirt confusion has led some to claim police arrested the wrong person. At a press conference last week, Pyle said his officers are confident they arrested the correct person. At Tuesday’s forum, Pyle alleged J Bar staff members located Bealer and pointed him out to police.

Two officers went to approach him, the chief said, but Bealer allegedly walked off. This led to an altercation and the two officers attempted to arrest Bealer. A third officer arrived after the scuffle was already on the ground, Pyle said. It is at this point the video posted by an OU student to Twitter begins — with the three officers working together to restrain and arrest him. A police TASER was reportedly deployed during the arrest and Bealer received medical treatment for the barb wound and for a “small abrasion” to the hand.

Pyle has said there is further video evidence of the incident which has not been made public due to the ongoing investigation and Bealer’s impending trial in Athens Municipal Court. Bealer has pleaded innocent to misdemeanor charges of obstructing official business and resisting arrest.

Pyle said there is a “bevy of information” that the community does not yet know about the case and that he believes it will exonerate the officers’ actions.

The chief noted that his department reports and reviews each “use of force” incident — defined as any action taken by an officer beyond a standard handcuffing of a suspect.

Elaborating further, Chief Powers said use of force situations are very “fluid” and the context should be judged against “a lot of factors.” The goal is to deescalate situations, Powers said, but the behavior of suspects can lead an officer to escalate their use of force.

It was pointed out several times that one of the three officers involved, Ethan Doerr, has been the subject of a previous use of force lawsuit while at Athens and a use of force complaint while serving at another department.

Pyle said his department had reviewed the incident leading to the lawsuit and determined Doerr had not broken any APD conduct policies.

The chiefs defended the tactic of forcing a suspect’s head down on the ground during a difficult arrest. The goal, Powers said, is to restrain the person’s movement to make the arrest easier and prevent injury.

APD bases its use of force policies based on the latest court precedents. This is a legal question, Pyle insisted, not a moral one.

Officer training was a main subject of questioning.

Pyle said APD officers undergo regular implicit bias training to make sure they treat everyone equally during police encounters. He said the last diversity training for APD was held in 2012 and it is time to do so again.

Powers said his officers undergo mandatory diversity training. In Nelsonville, Tims said she emphasizes this training to her officers and often does “ride-alongs” with them to instill positive values on a one-on-one basis.

As mentioned, neither APD nor OUPD employ a non-white police officer. Powers said he has had zero applicants of color in the last handful of years, while Pyle said APD has had just one, though they were not hired.

Tims said the Hocking College Police Department does have a diverse force, and credited her recruitment efforts on campus for achieving that.

Pyle and Powers said their departments will work to better encourage applicants of all backgrounds, and noted they can hire uncertified applicants and will pay for their police academy training.

Winsome Chunnu-Brayda, the associate director of OU’s Multicultural Center, was a brief speaker at the beginning and end of Tuesday’s forum. She concluded by hoping the chiefs would be able to take the stories and suggestions told back to their departments to implement real changes.

“That’s what we’re hoping for,” she said, “action,