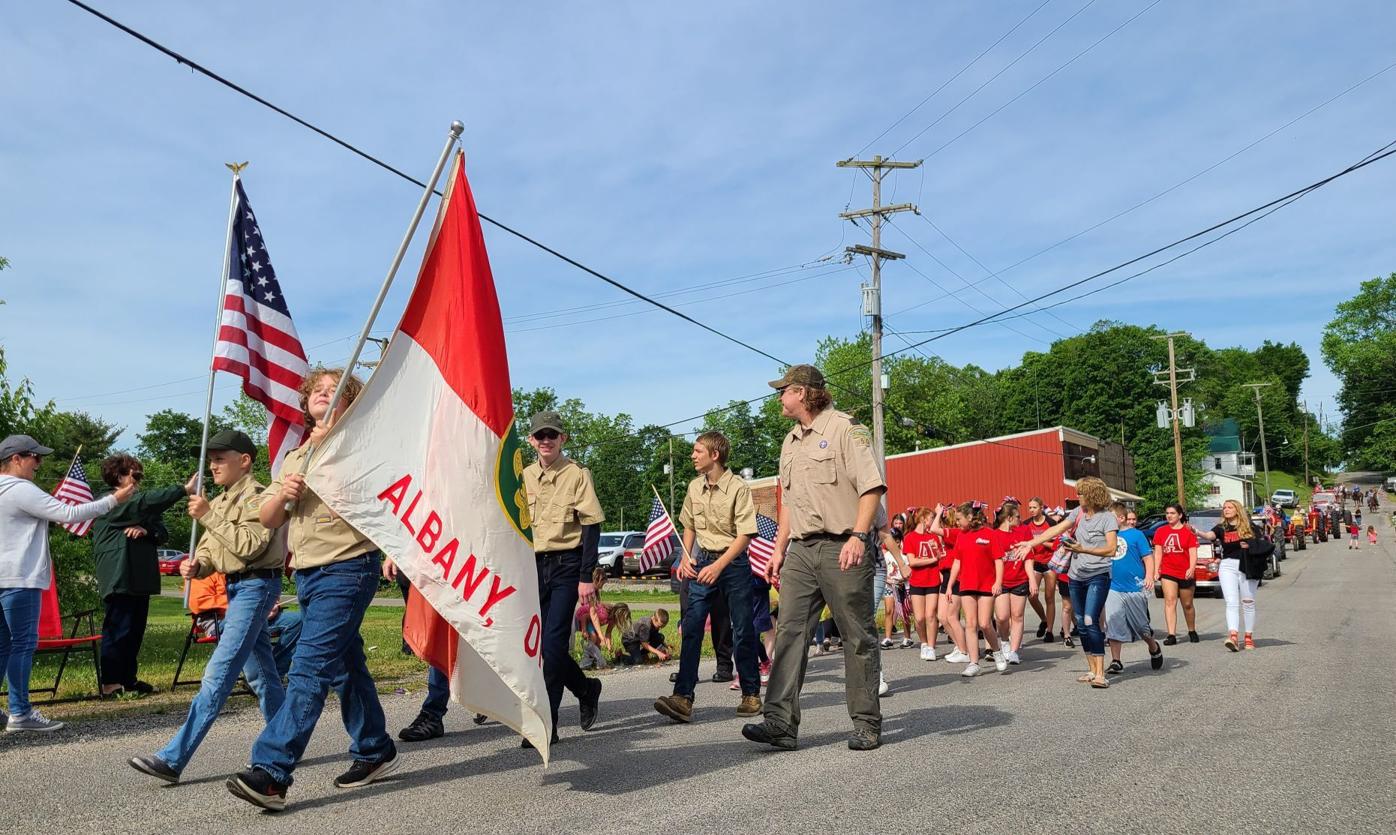 Members of a local Boy Scout troop march through New Marshfield to the nearby cemetery for a memorial ceremony. 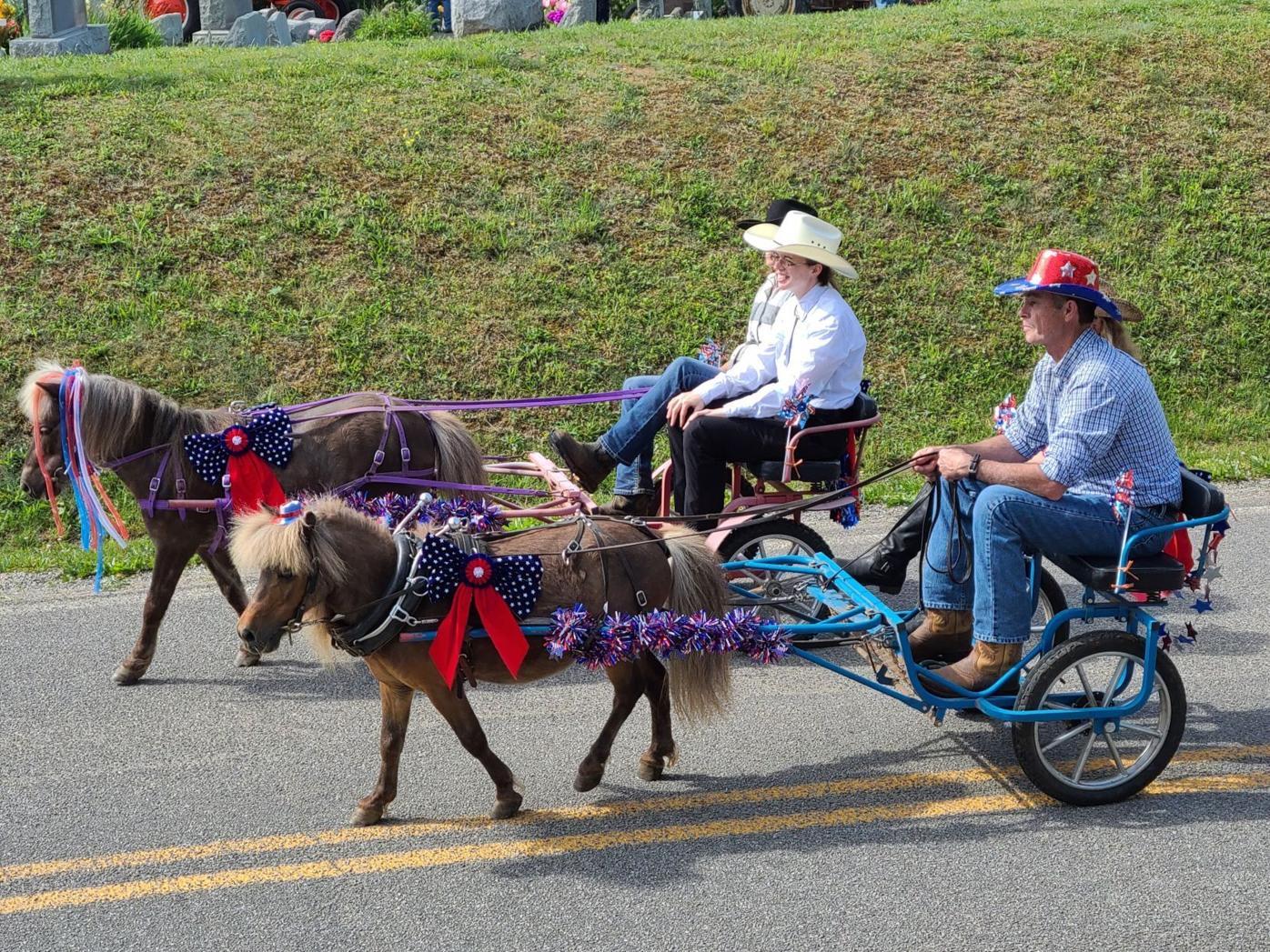 Miniature horses trot up to the cemetery where the parade ended with a ceremony.

Members of a local Boy Scout troop march through New Marshfield to the nearby cemetery for a memorial ceremony.

Miniature horses trot up to the cemetery where the parade ended with a ceremony.

Well over a hundred people marched, spectated, and paid respects to fallen soldiers during New Marshfield’s Memorial Day parade and commemorative service at the cemetery, the first parade in many years.

Kevin Martin, Gilham-Frank VFW Post 8804 commander and organizer of the parade asked the assembled crowd who remembered when the last parade was. Many people could recall a parade from their youths, but a concrete date of the last parade was not determined.

One man remembered his sister marching in the parade in high school, which he said would have been 1967 or 1968.

Martin told The Athens Messenger the return of the parade was a resounding success — and a fitting tribute to those who have fallen in the line of duty.

“I thought the whole event overall was world-class,” Martin told The Messenger following the ceremony. “There was a phenomenal amount of people and supporters, it was overwhelming.

Last year, instead of a hundred or more gathering to pay respects, it was less than a dozen due to the global health crisis. Only a few veterans and some of those who snuck in saw the ceremony last year, he said.

Martin said it was great to have everyone back for the ceremony, and also publicly encouraged those in attendance to receive their vaccinations.

“To have these people come back here like they have for 74 years — and coming back — not being afraid to assemble, and to come out and support veterans and the VFW, I’m just emotional in a wonderful way,” Martin said.

The parade began in downtown New Marshfield, and featured fire engines, classic cars, tractors, cheer squads and horseback riders. They proceeded up to the New Marshfield cemetery, where soldiers from most major wars, including the Civil War, are buried.

At the cemetery, a Memorial Day ceremony, hosted by Gilham-Frank VFW and other local veteran organizations, offered a somber tribute to those in the armed forces who died in the line of duty.

A small band played patriotic and religious music, including songs like “America the Beautiful” and “Poor Wayfaring Stranger.”

The event also featured guest speaker Brian Schoen, the Ohio University history department chair, who reflected on what the origins of Memorial Day mean, and how we reflect on that today.

The national origin of Memorial Day dates back to the years following the Civil War, although some local governments had already been observing a similar holiday in years prior.

In 1868, Commander in Chief John A. Logan of the Grand Army of the Republic issued General Order Number 11 designating May 30 as a memorial day “for the purpose of strewing with flowers or otherwise decorating the graves of comrades who died in defense of their country during the late rebellion, and whose bodies now lie in almost every city, village, and hamlet churchyard in the land.”

Schoen also said the idea of what the Civil War Union army looked like may not be an accurate picture of the motley force of immigrants, Black men fighting alongside the idealized “Anglo-Saxon” soldier many think of today when they think about the Union force.

After Schoen spoke, Martin offered all the veterans in attendance to come forward and place a flower on a memorial to honor their comrades. Then, the firing squad performed the 21-gun salute that defines many Memorial Day celebrations throughout the country.

Jimmy Stewart, 78, of Albany, was a spectator for the parade and the ceremony, and is a veteran himself. He said he was not only there to watch his relatives ride on horseback in the procession, but to honor fallen soldiers.

“It’s humbling, and it’s an honor to be able to say I support the military that have given their lives so I can sit here,” Stewart said.

Stephanie Stewart, 29, of Albany, said she was also there to watch her daughter and husband ride their horses in the parade. She said the 4H riding group they are members of volunteered to join the parade.

“We’re glad to be here to celebrate our fallen soldiers,” She said.