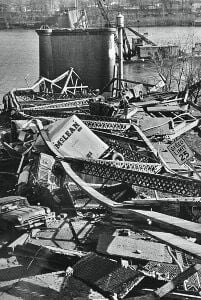 It was rush hour on Dec. 15, 1967. Motorists were traveling back and forth between Point Pleasant, West Virginia and Kanauga, Ohio. Many workers used the Silver Bridge to commute to work. Others used the bridge for shopping reasons, especially during the Christmas season. Commercial trucks used the bridge to get to where they were going.

Right around 5 p.m., an eyewitness noted, “The bridge was bouncing up and down. It seemed like it just stopped, just hesitated for a minute. That’s when the cables started snapping. Then zoom, it gave way.”

The giant structure quickly collapsed into the dark waters of the Ohio River. One rescue diver later noted, that the bridge might have fallen upside down forming a cage for the vehicles and their occupants. Seventeen trucks and forty cars went down with the suspension bridge. Forty-six people lost their lives.

For a long time, no one knew the exact cause of the collapse of the Silver Bridge. But what we do know is that the ill-fated bridge had not been inspected for a number of years.

The state of West Virginia owned the bridge and was responsible for these inspections. The last thorough bridge inspection was performed in 1951. Other lesser inspections took place in later years, some by using binoculars from afar. It is easy to conclude that this lack of inspection and maintenance led to this nationally known catastrophe. A 1971 safety board investigation concluded the cause of the collapse was a cleavage fracture in the eye of the eye-bar caused by stress and corrosion.

Let’s go back for a moment to that wonderful day of May 30, 1929. It was the grand opening of the much-anticipated Silver Bridge across the Ohio River. There were as many as 26,000 people who attended this festive event. There was a parade with marching bands and a ceremony featuring many prominent speakers. There were even several couples that were married on the bridge during this opening day. Before this time, there were no bridges in the area and people were anxious to connect West Virginia and Ohio.

The Silver Bridge connected Point Pleasant, West Virginia and Kanauga, Ohio. The bigger city of Gallipolis, Ohio was nearby. There was much commerce between the two states after the bridge was complete. Workers could easily commute from Gallipolis to Point Pleasant and vice-versa. Commercial trucks used the bridge to transport goods. The Silver Bridge served a great purpose for many people.

Immediately after the collapse, rescue efforts were underway. There was great cooperation between all the services on both sides of the river. But because it was a December night, it was already dark. There were hardly any lights to assist in the immediate rescue operation. Rescuers heard survivors, but didn’t know their location. They were somewhere in the deep dark wreckage way below where the rescuers stood. Nine people who did survive the collapse were plunged into the freezing water. It was some sort of miracle that a City Ice and Fuel Company boat just happened to be making their rounds in the area at this time. The boat crew was able to quickly pluck these frigid survivors from the dark waters.

After a day, all hope of finding any more people alive was gone. The objective of the rescue crew was to find the bodies of the missing. This was slow work. Cranes on barges were brought in to pull up bits of the bridge superstructure one chunk at a time. In some cases, cars and trucks were trapped under 40 feet of water. Experienced deep-sea divers were brought in from New Orleans. They put themselves in great danger as they worked in water with zero visibility and constant danger of falling metal. The two center piers that held up the bridge were still standing while much of the bridge was under water.

Piece by piece, the wreckage was disassembled and every once in a while, a vehicle containing victims were found. Bodies were brought to a makeshift morgue at the National Guard Armory. Forty-six people died at this disaster. All but two bodies were recovered.

There is much more to speak of with the Silver Bridge disaster. Next week’s “Silver Bridge, Part 2”, will cover some of these points.

If anyone has any memories or comments about the Silver Bridge disaster, please drop me a note. I will add it to my notes. John Halley, jhalley@athensmessenger.com