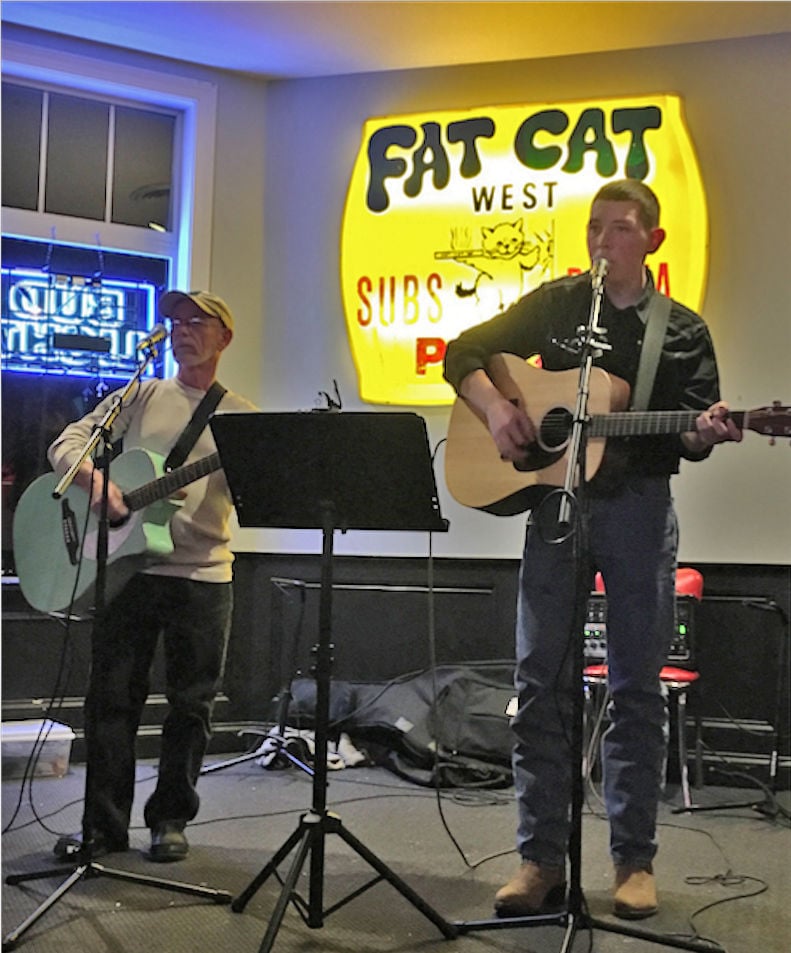 Guitarist Lincoln Mash, 16, (right, foreground), pictured with his uncle Ron on rhythm guitar, and fellow 16-year-old guitarist Aubree Riley have performed at Fat Cat Pizza in Lancaster, one of the regional stops for their schedule dates. 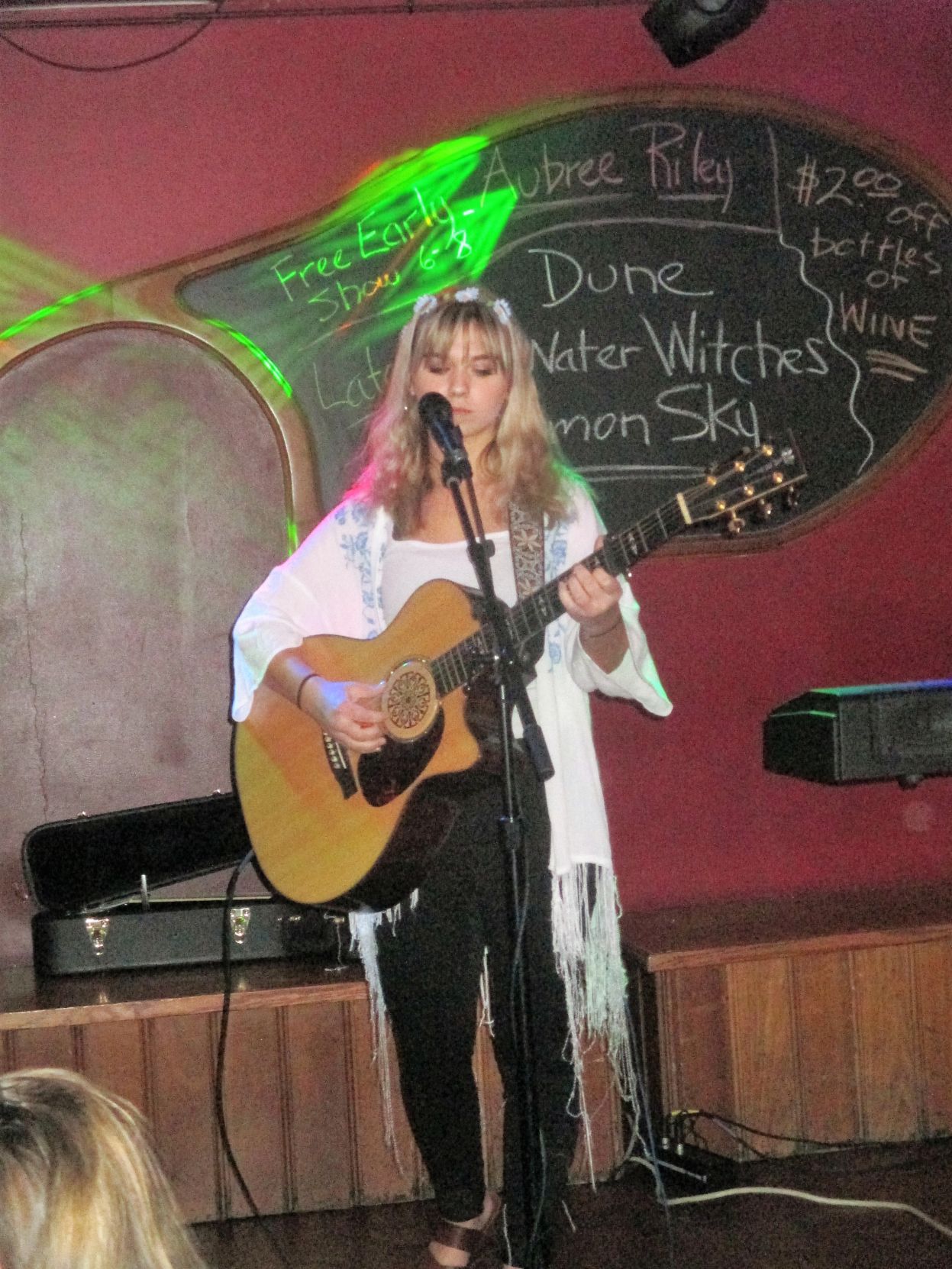 Singer-songwriter Aubree Riley, 16, performs her original song “Workin’ on Me” May 11 inside the Casa Cantina in Athens.

Guitarist Lincoln Mash, 16, (right, foreground), pictured with his uncle Ron on rhythm guitar, and fellow 16-year-old guitarist Aubree Riley have performed at Fat Cat Pizza in Lancaster, one of the regional stops for their schedule dates.

Singer-songwriter Aubree Riley, 16, performs her original song “Workin’ on Me” May 11 inside the Casa Cantina in Athens.

Two 16-year-old guitar players in Athens County have developed a following both by word-of-mouth and through social media. One is a singer-songwriter who describes her style as “experimental,” while the other enjoys playing and singing classic country song covers as his guitar solo ability continues to impress veteran guitarists.

Aubree Riley and Lincoln Mash, sophomores at Athens High and Nelsonville-York High, respectively, have some things in common beyond knowing each another and their mutual affinity for playing the guitar. Both have regular tour dates throughout the region and have played at some of the same venues.

Riley typically takes the stage as a solo artist, while Mash is often accompanied by his uncle, Ron, on rhythm guitar. He and Riley each started around the age of 8 or 9, with a lot of their talent self-taught. When the situation calls for it, Mash also brings along a mandolin player, bass player, and a second guitarist.

Riley said she has known from a very young age that songwriting is her calling in life. She describes her style as experimental with American folk song touches and likens her musical lyrics to being similar in style to the late Kurt Cobain of Nirvana.

“The earliest songs I wrote where when I was 8 or 9 years old,” she said during a recent tour stop at the Casa Cantina. “Then I picked up the guitar when I was 11 years old and taught myself two chords that day, E major and A minor.”

No less passionate about his musicianship is Mash, whose musical influences include Merle Haggard and Hank Williams, Jr. He is also comfortable playing bluegrass, folks songs, and music that bridges the rock-and-country connection.

“I do a lot of shows in Logan and in Albany,” Mash said, speaking of the Hocking County Fair, where he will perform again this year on July 8, as well as past performances at the Albany Independent Fair.

Adam Graham, a guitar teacher and instructor at Hocking College who works with Aubree and has performed with Mash, says the sky is the limit for the two if they continue to advance with their passion intact. He started teaching Riley about five years ago when they had a chance meeting at Blue Eagle Music.

“Aubree had taught herself everything she knows to that point and I feel that my job is to not interfere with something that is already very good, but to give her tools that will unlock the music that exists in her imagination,” Graham said. “She is already successful and there is no stopping her. Some people are lucky enough to figure out what they should be doing with their lives at a young age. Aubree is definitely that person.”

Riley said the music on the albums she has released often speak to gaining from life experiences as she advances into early adulthood. Such are the the lyrics to her song “Workin on Me,” part of which are:

And play my music real loud

Because boy I ain’t worried about you now

And you will see that I ain’t worried about you

Baby I’m workin’ on me

Graham, who met Mash about three years ago, remembers the two of them playing an impromptu jam session at Blue Eagle Music to the tune of the Eagles classic, “Hotel California.” The two have stayed in touch ever since, and Mash even offered to step in recently and play in the band Graham is a member of, Keesey, when a fill-in frontman on guitar was needed at The Smiling Skull.

Graham said Mash did a great job, adding that he has been impressed with what he’s heard when the youth improvises his own guitar solos.

“Lincoln’s knowledge of the classic country music catalog is impressive to say the least,” Graham offered. “Lincoln had our band members laughing at the obscure songs he knew and was able to play and sing. He is a dedicated and serious young man and definitely someone with a great future ahead of him.”

Mash can be seen performing in videos on the D & R Studio Facebook page, so named for his uncle Ron and his friend Dave Norris. He and his sister, Valerie, 17, who is also a talented singer and plays guitar, have received a Sunday invite once again to the Nelsonville Music Festival. Young performers will perform Sunday at the No-Fi Cabin, and Mash will also perform at the festival on Saturday morning starting at 10:30 a.m. as part of the Afterschool Music Program bands on the Porch Stage.

This will be a busy summer for Riley and Mash. Besides the Hocking County Fair, he is looking forward to playing for an ALS benefit show June 11 at Stuart’s Opera House. Riley will debut her next album, “Aubs,” July 2 at The Eclipse Store in The Plains.

Both have a good support system to help with show bookings, Mash helped by his parents, Joe and Christina, and Aubree by her parents, Rhawny and Anthony. Her little sister Eva, 9, is sometimes on hand to enjoy her big sister’s voice. So do her 1,306 Facebook followers.