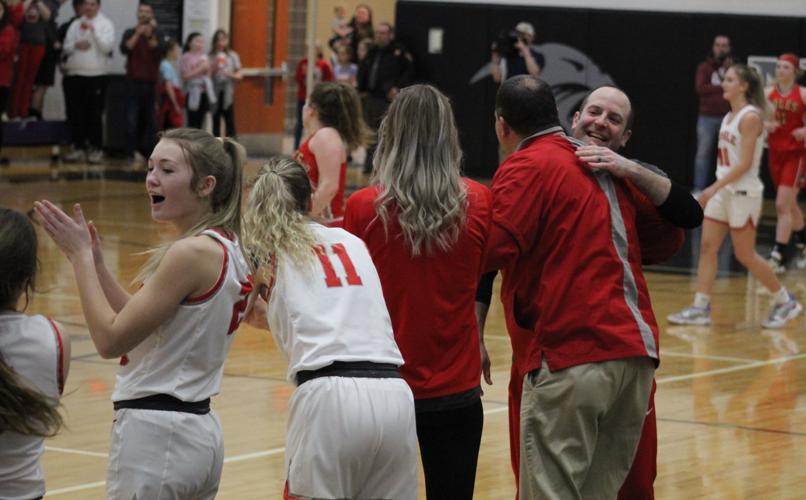 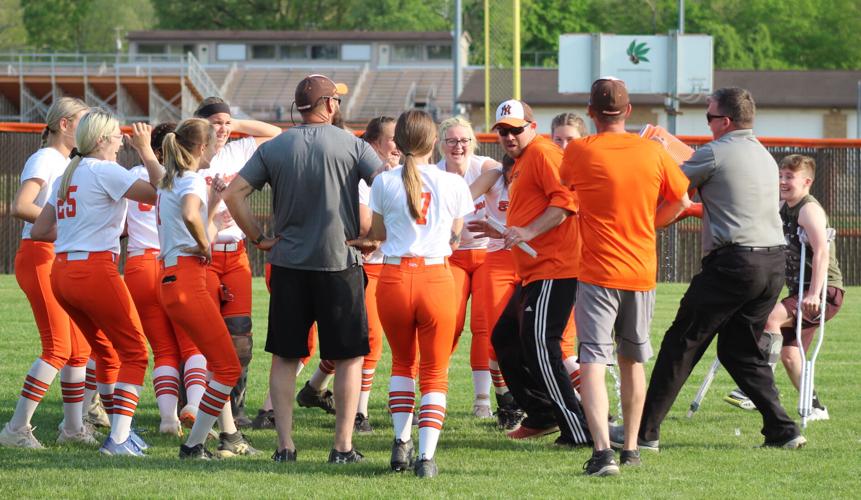 Nelsonville-York softball coach Wayne Dicken is surprised with a bucket of ice water by N-Y Athletic Director Jay Kline after the Buckeyes won a Division III sectional title on May 12. 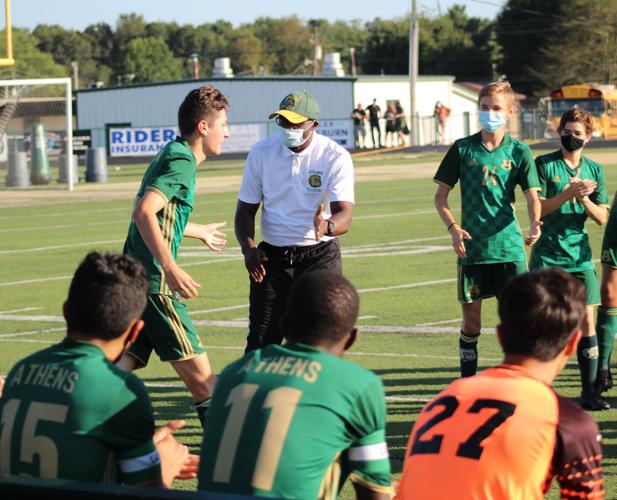 Athens coach Simon Diki (center), seen here before a game against Alexander on Sept. 2, 2021, coached the Bulldogs to a regional final in 2021. 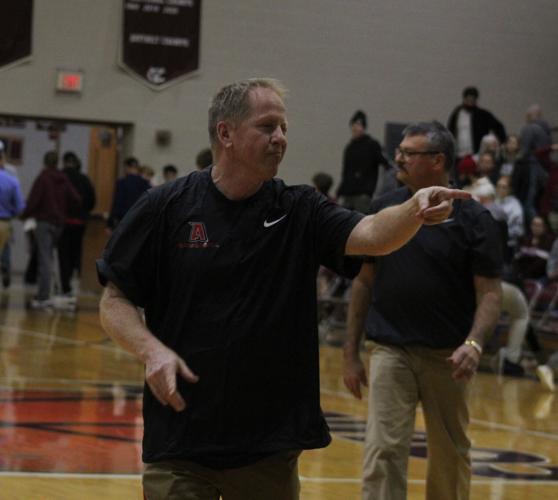 Alexander coach Jeff Skinner walks off the court after a win at Vinton County on Feb. 8. Skinner led the Spartans to a share of the Tri-Valley Conference Ohio Division title in his second season leading the program. 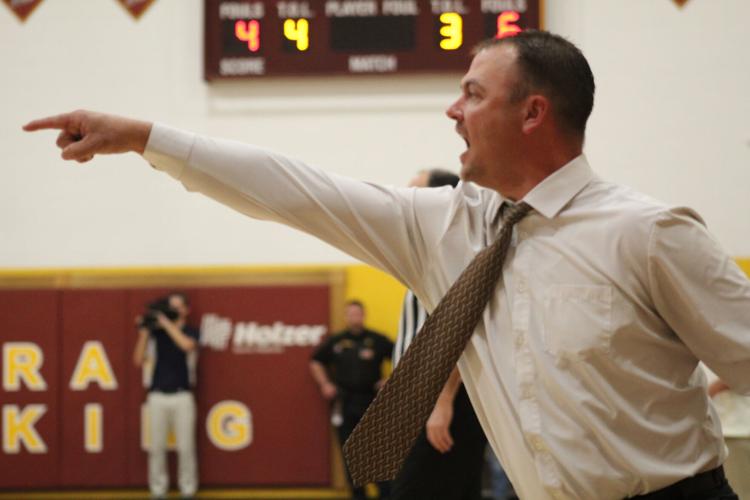 Federal Hocking coach Jonathan Thompson shouts instructions during a game against Trimble on Feb. 11. Thompson led the Lancers to league and sectional titles in 2022.

Nelsonville-York softball coach Wayne Dicken is surprised with a bucket of ice water by N-Y Athletic Director Jay Kline after the Buckeyes won a Division III sectional title on May 12.

Athens coach Simon Diki (center), seen here before a game against Alexander on Sept. 2, 2021, coached the Bulldogs to a regional final in 2021.

Alexander coach Jeff Skinner walks off the court after a win at Vinton County on Feb. 8. Skinner led the Spartans to a share of the Tri-Valley Conference Ohio Division title in his second season leading the program.

Federal Hocking coach Jonathan Thompson shouts instructions during a game against Trimble on Feb. 11. Thompson led the Lancers to league and sectional titles in 2022.

Many coaches have tried over the years to give the Nelsonville-York softball program a winning season.

The Buckeyes found the right combination in the 2022 season.

Dicken took over the softball program and led Nelsonville-York to heights its never before seen.

The Buckeyes’ previous school record for wins in a season was eight.

They shattered that mark, going 15-9 and winning the program’s first-ever sectional championship.

Dicken had a bucket of ice water dumped on him in celebration by Nelsonville-York athletic director Jay Kline after the Buckeyes’ 3-2 win over Reedsville Eastern in the sectional final.

The Buckeyes had the opportunity to play in the district tournament at Unioto High School against Portsmouth West. The Buckeyes would fall, but it was to a West team that went 26-3 and eventually advanced to the regional finals.

Along the way, Nelsonville-York swept the season series against Alexander and Meigs. The Buckeyes also won at Athens and at River Valley, giving them six Tri-Valley Conference Ohio Division wins.

The Buckeyes hadn’t won a league game since 2018, and only had one TVC-Ohio win dating back to 2013 before the memorable 2022 season.

Dicken was named the TVC-Ohio Coach of the Year for his efforts.

As if that wasn’t enough, Dicken was also named the District 13 Coach of the Year in the fall after leading the Buckeyes’ volleyball program to a 19-5 record.

The Buckeyes were sectional champions as well in volleyball, and came up just shy of a spot in the district finals after a close loss at Northwest.

Dicken, who was also an assistant coach during basketball season, arguably puts in more hours overall than any coach in the state.

Dicken’s contributions to Nelsonville-York athletics during the 2021-22 season can’t just be measured in wins and losses, even though the success and accolades are certainly abundant.

It only took Jeff Skinner two seasons to scale to the top of the Tri-Valley Conference Ohio Division mountain.

Skinner helped lead the Alexander Spartans to a share of the TVC-Ohio title in just his second season.

Skinner and the Spartans, led by standout Kyler D’Augustino, found a way to finish the season strong.

Alexander and Vinton County both tied in the TVC-Ohio standings with 10-2 records. Alexander swept the season series with the Vikings, including a huge late-season win in McArthur to make the shared title possible.

Skinner was once again named TVC-Ohio Coach of the Year for Alexander’s exploits. Skinner won the award numerous times during his tenure at Athens High School, and now can boast of winning the award at his alma mater.

Alexander also went on to win a sectional title in Division III, and nearly went all the way to the district finals.

The Spartans lost a triple-OT heartbreaker to Fairland, in a game played at Waverly High School, to end the year on a tough note.

However, it didn’t detract from the fact that Alexander found its footing, and both Skinner and D’Augustino will be back to defend the title in the winter.

Jonathan Thompson admitted during last basketball season that he wasn’t sure how many victories were possible.

Federal Hocking graduated its entire starting lineup from a sectional title winning team in 2021. A lot of new and young faces were in the lineup.

Federal Hocking brought back some experience, as players like Tariq Cottrill, Lane Smith and Andrew Airhart were key contributors a year before.

Those players took on more of a role in 2021-22, and the late-season addition of guard Andrew Crockwell put the Lancers over the top.

Federal Hocking’s season was undoubtedly highlighted by a pair of classic late-season clashes with Trimble.

The Lancers lost at home to the Tomcats, but won in Glouster on the final regular season game on Crockwell’s half-court shot at the buzzer.

The win allowed Thompson and the Lancers to share the league title with Trimble. It was Federal Hocking’s second Tri-Valley Conference Hocking Division title in three seasons.

The Lancers returned to the district tournament for the third season in a row, eventually losing a close game to Western in a game played at Wellston High School.

Western eventually went on to advance to the regional finals.

Thompson, who just completed his fourth season, has given the Lancers stability and returned their winning culture to McInturf Gymnasium.

Simon Diki has become a fixture on the sidelines for one of Athens’ most successful programs.

Diki and the Bulldogs advanced all the way to the Division II, Region 7 championship game in 2021.

Athens eventually lost to Unioto, but were 13-4-4 after going all the way to the Elite Eight.

Diki has led Athens for the past eight seasons, twice advancing to a regional final game.

The Bulldogs’ tournament run was full of thrillers, starting with a 2-1 win over Warren in a sectional final.

Athens, a No. 6 seed in the bracket, then upset Fairfield Union 3-2 in overtime in the district semifinals.

Athens then pulled off another upset, beating Gallia Academy 1-0 in a district final to advance to the regional tournament for the 10th time in program history.

The regional semifinal win was the Bulldogs’ most comfortable of the tournament season, a 5-3 win over Dover.

Joe Richards has been climbing the mountain for the past seven seasons as Trimble’s girls’ basketball coach.

It all led to 2021-22 season, which will do down as one of the most successful in Trimble’s program history.

Trimble went 22-5 on the season, advancing all the way to a regional final in Division IV.

It was a culmination of work done by Richards, and his assistant coach Jason Richards.

The duo were on the bench when Trimble had to cancel the rest of the 2017-18 season due to a lack of healthy players.

A talented group of freshmen entered into the program the following season, and the Tomcats never looked back.

Trimble won the Tri-Valley Conference Hocking Division for the third season in a row, sharing the top spot with Waterford.

The Tomcats won at Waterford before Christmas, part of their 13-0 start to the season. Trimble also swept the season series with rival Nelsonville-York for the second season in a row.

Trimble advanced to the district finals for the third season in a row, breaking through with a 62-47 win over South Webster for the program’s first district title since 2006.

Trimble then beat Monroe Central 56-49 to advance to the regional finals for the second time ever and first time since 2005.

The Tomcats would lose to eventual state-champion Waterford in the regional finals, but not before Richards and his talented group of seniors made program history.

Check your email for details.

Submitting this form below will send a message to your email with a link to change your password.

An email message containing instructions on how to reset your password has been sent to the e-mail address listed on your account.

Your purchase was successful, and you are now logged in.

A receipt was sent to your email.