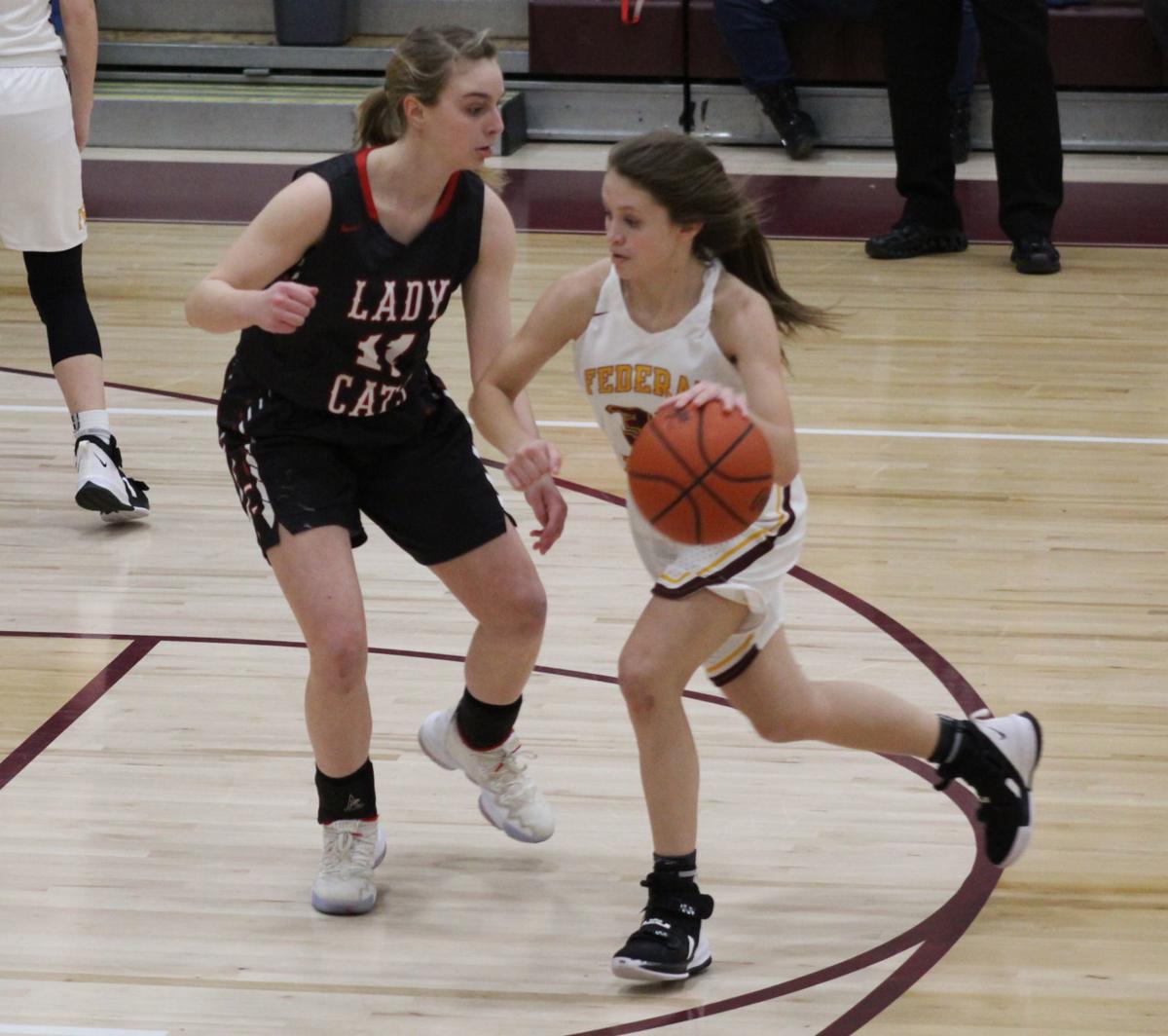 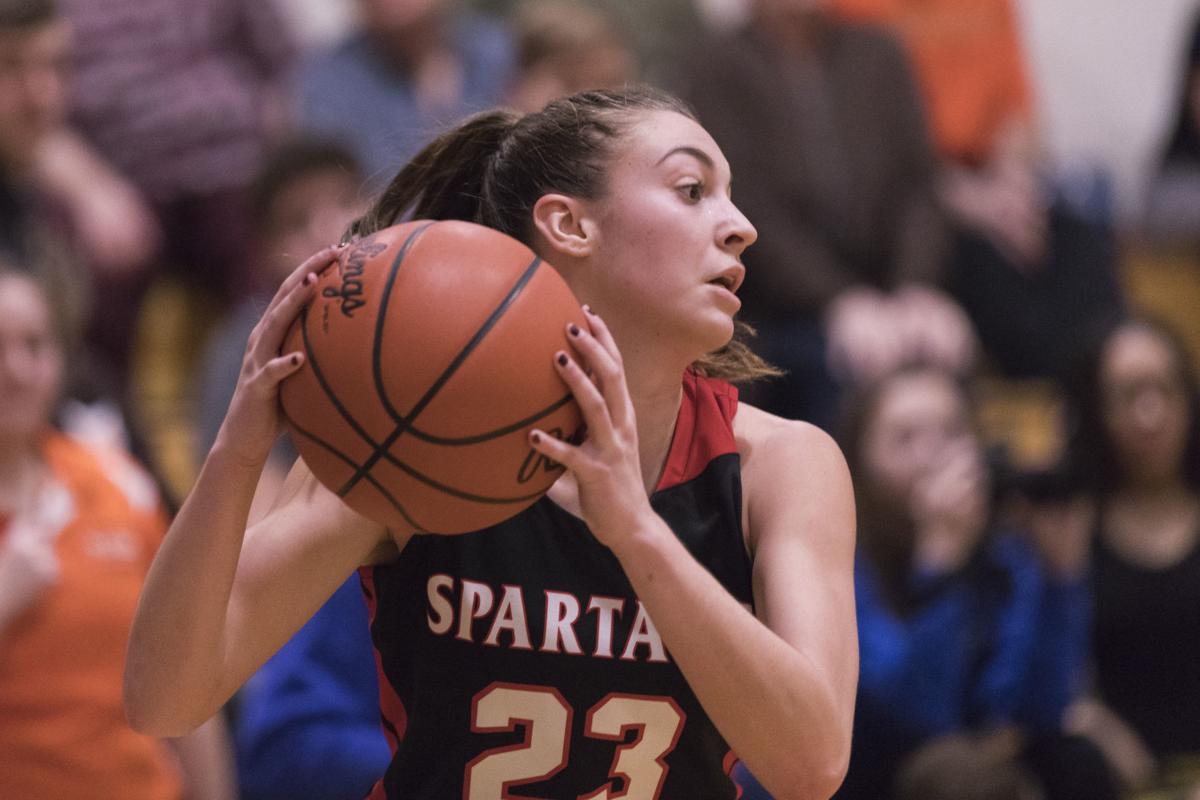 Alexander’s Taylor Meadows (23), seen here during a game against Nelsonville-York, was a three-sport athlete for the Spartans. 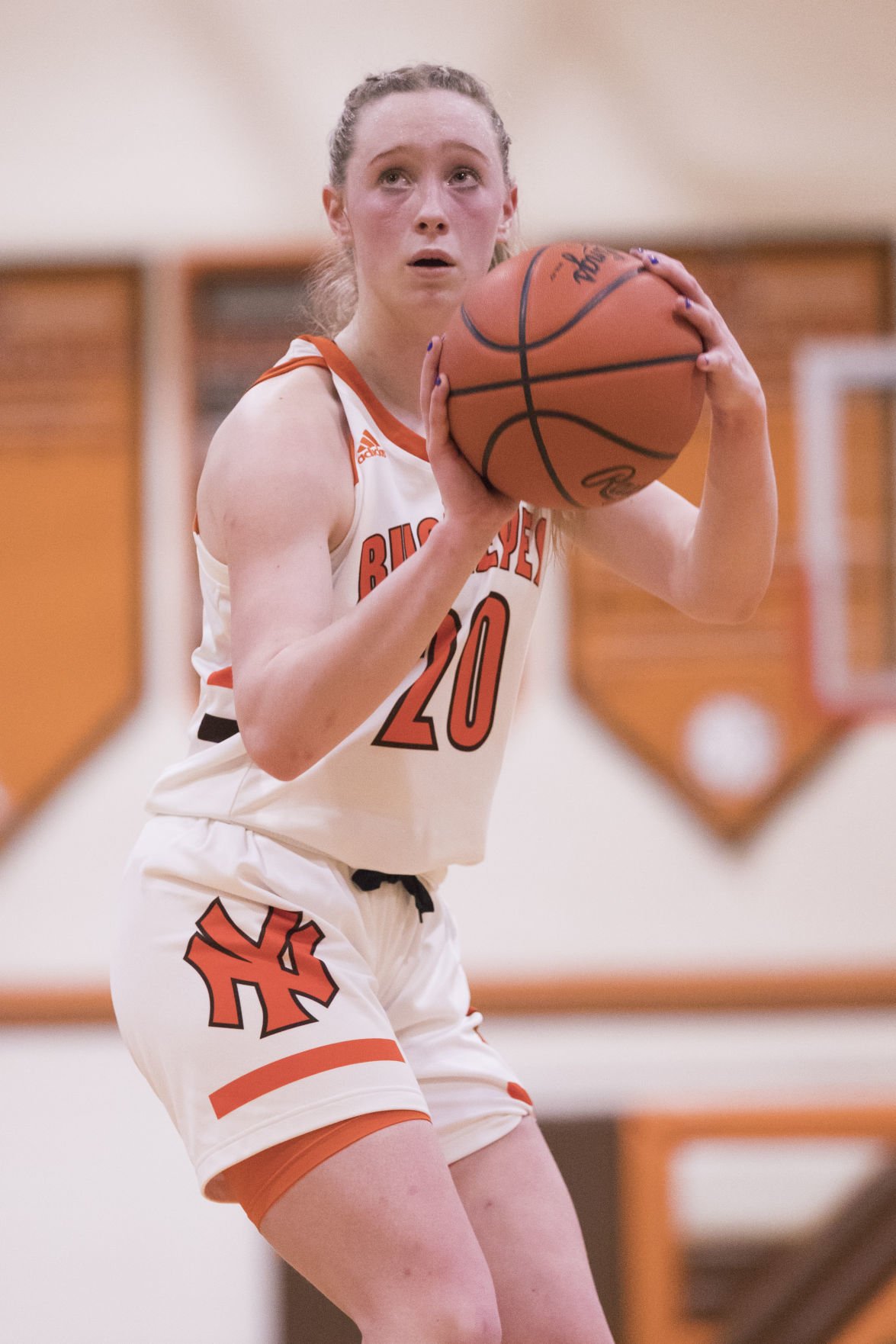 Nelsonvillle-York’s Mackenzie Hurd takes a free throw during a game earlier this season. 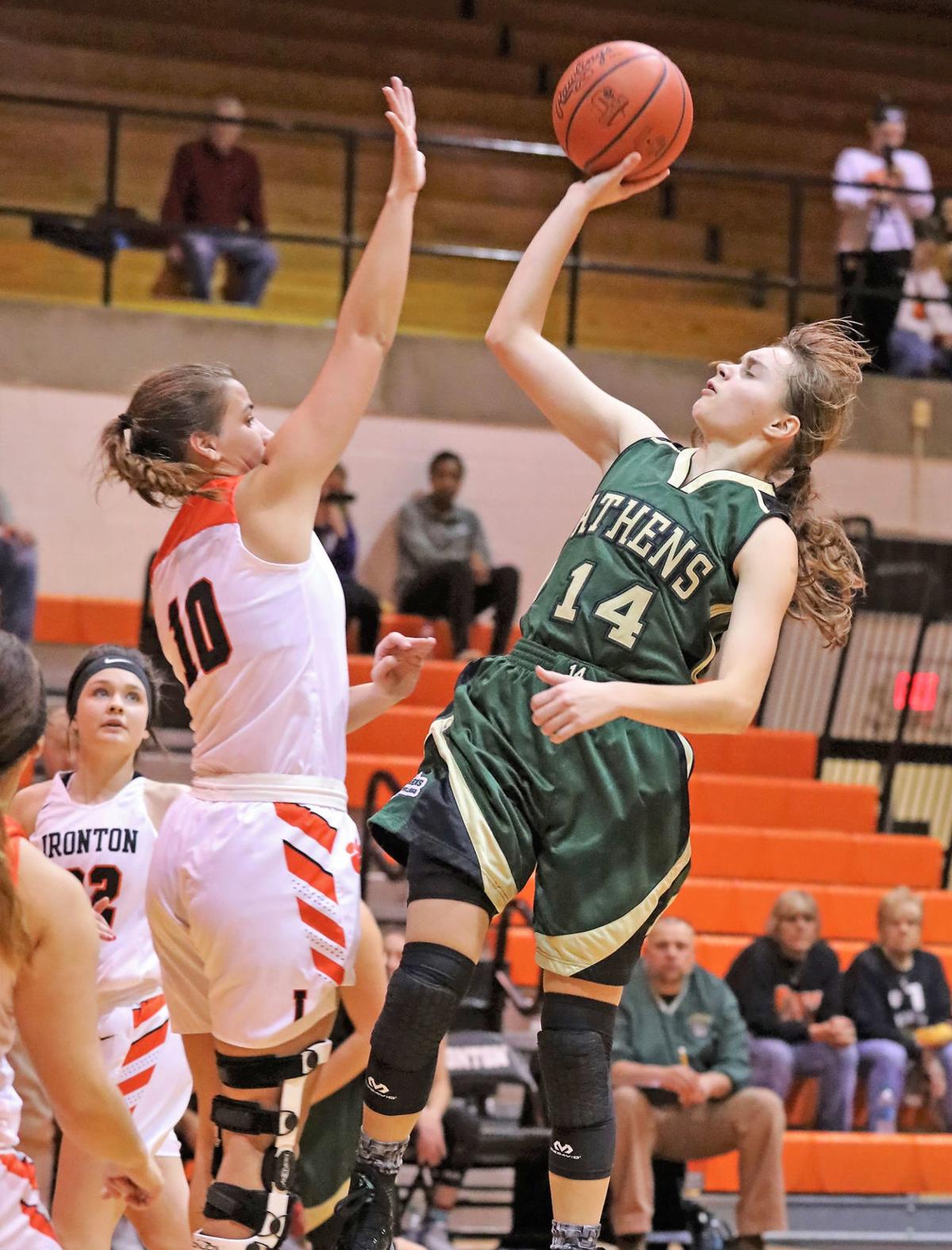 Athens Laura Manderick drives to the basket against Ironton during her junior season. 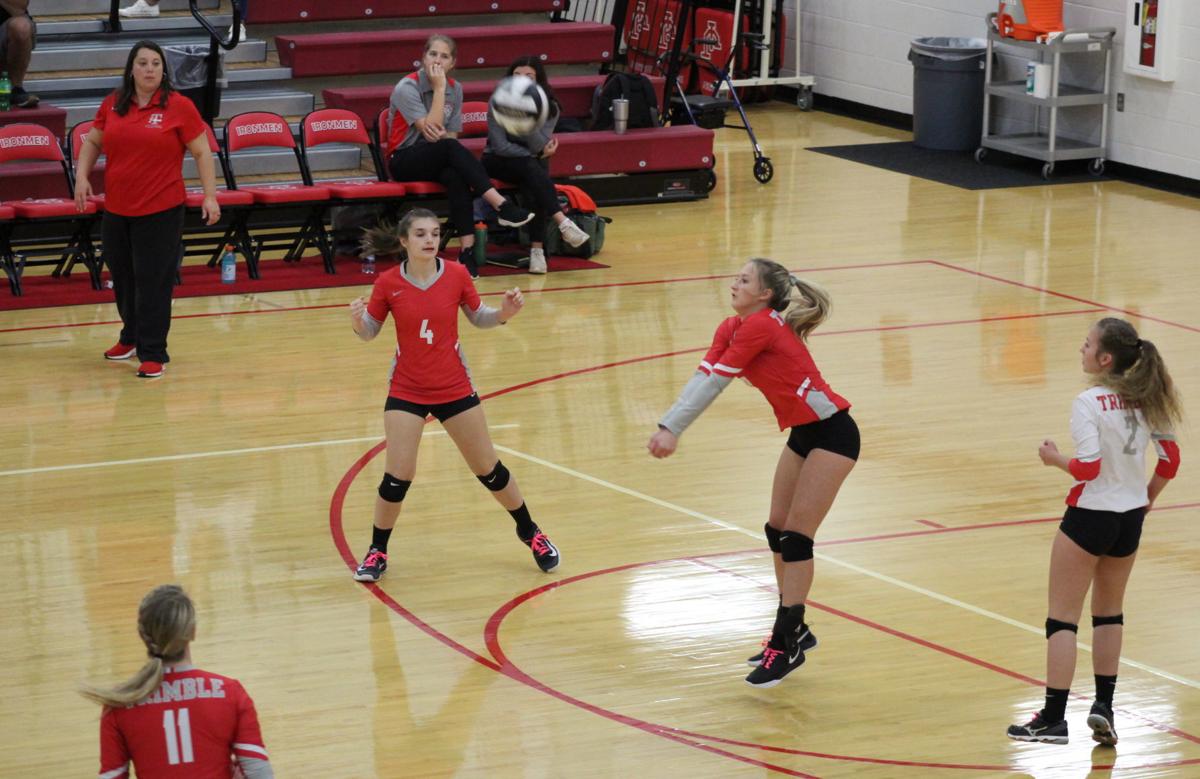 Alexander’s Taylor Meadows (23), seen here during a game against Nelsonville-York, was a three-sport athlete for the Spartans.

Nelsonvillle-York’s Mackenzie Hurd takes a free throw during a game earlier this season.

Athens Laura Manderick drives to the basket against Ironton during her junior season.

The 2019-20 school season may have been cut short, but there were still plenty of games and accomplishments to celebrate. Today, take a look at the female athletes of the year for each of the five Athens County schools.

Laura Manderick will go down as one of Athens’ all-time leading scorers on the basketball court.

Manderick led Athens in scoring each of the last four seasons. Opposing defenses knew she was the key person to defend in the Bulldogs’ attack, but the guard generally found ways to put points on the board.

Manderick finished her Athens career with 1,322 points. She helped the Bulldogs win a tournament game last season for the first time since 2015.

Manderick was thrust into the starting lineup as a freshman and scored 353 points on the season, never looking back. She scored her 1,000th career point before the conclusion of her junior season.

Taylor Meadows made her mark felt in three sports at Alexander High School.

Meadows was a big part of the girls’ soccer success over the last four seasons. She rose to a starter on the basketball court in the winter, and she’ll graduate as one of the fastest track and field athletes the Spartans have ever seen.

Meadows was a first team Division III all-district pick on the Ohio Scholastic Soccer Coaches Association in the fall. Meadows is one the program’s all-time leading scorers, helping the team advance to the regional finals during her junior season.

Alexander advanced at least to the district semifinals during all four of Meadows’ seasons on the pitch. She recorded a hat trick — scoring three goals in the first 13 minutes of the Spartans’ sectional tournament win over Chesapeake.

Meadows was also a key member of Alexander’s girls’ basketball team her senior year. A first-time starter in that sport, she took on a defensive role as well as thriving as a spot-up shooter for the Spartans.

Alexander went 16-9 on the season, winning another sectional crown.

Perhaps Meadows’ best sport was track and field. She set a school record in the 200 meter dash during her junior season with a time of 26.81 seconds.

Unfortunately, Meadows didn’t get a chance to improve on that mark during he senior season, but she still left an impact on Alexander sports.

Laikyn Imler, just a sophomore, was in the middle of a lot of winning for the Trimble Tomcats last year.

Imler started the year as an all-TVC-Hocking selection on the volleyball court. An outside hitter, Imler was the Tomcats’ top offensive threat at the net for most of the season.

Trimble posted a 13-10 record on the volleyball court, claiming a sectional championship in Division IV.

Imler and the Tomcats continued to build off of that success in the winter on the basketball court. As the point guard, Imler guided Trimble through an historic season.

Trimble also advanced to the district finals for the first time since 2006. The Tomcats were a young and balanced team, with fellow sophomores Riley Campbell Briana Orsborne, Emily Young and Jayne Six leading the way.

Imler was a third-team selection on the OPSWA Division IV Southeast District team. She averaged 11.0 points, 5 rebounds and 4 assists per game, as the Tomcats went 19-6 on the season.

Mackenzie Hurd, another talented sophomore, had a big year on the volleyball and basketball courts for the Nelsonville-York Buckeyes.

Hurd was an all-league selection on the volleyball court as an outside hitter. She helped the Buckeyes go 15-10 overall. They advanced to the district tournament for the first time since 2016.

Playing point guard, Hurd set the tone for the Buckeyes. They went 19-5 on the season, picking up regular season wins over the likes of Logan, Vinton County, Alexander, North Adams, Coal Grove, Fairfield Union and Trimble.

Already with a Division I offer from Xavier under her belt, Hurd figures to have two more big years left in her on the volleyball and basketball courts for Nelsonville-York.

Paige Tolson has been a fixture on the basketball court for Federal Hocking over the last three seasons.

However, the point guard really enjoyed a breakout winter during the 2019-20 season.

Tolson, a 5-foot-3 junior, was named the TVC-Hocking Most Valuable Player. She powered the Lancers to a successful season, averaging 19.5 points, seven rebounds and four assists per game.

Tolson had a number of big games for the Lancers. She scored 24 points and handed out five assists in an upset win over Trimble. She also scored 24 of the Lancers’ 43 points in a loss to Nelsonville-York. She had 26 points, six rebounds, four assists and two steals in a home win over Belpre.

Tolson also helped Federal Hocking to a Division III tournament victory. She scored 17 points in a 52-47 win over Lynchburg-Clay in a sectional tournament game. She added 16 points in a 52-34 loss to top-seed Eastern Brown in the tournament.

Federal Hocking went 12-11 overall, and figures to be a team on the rise as Tolson enters her final season leading the way in Stewart.