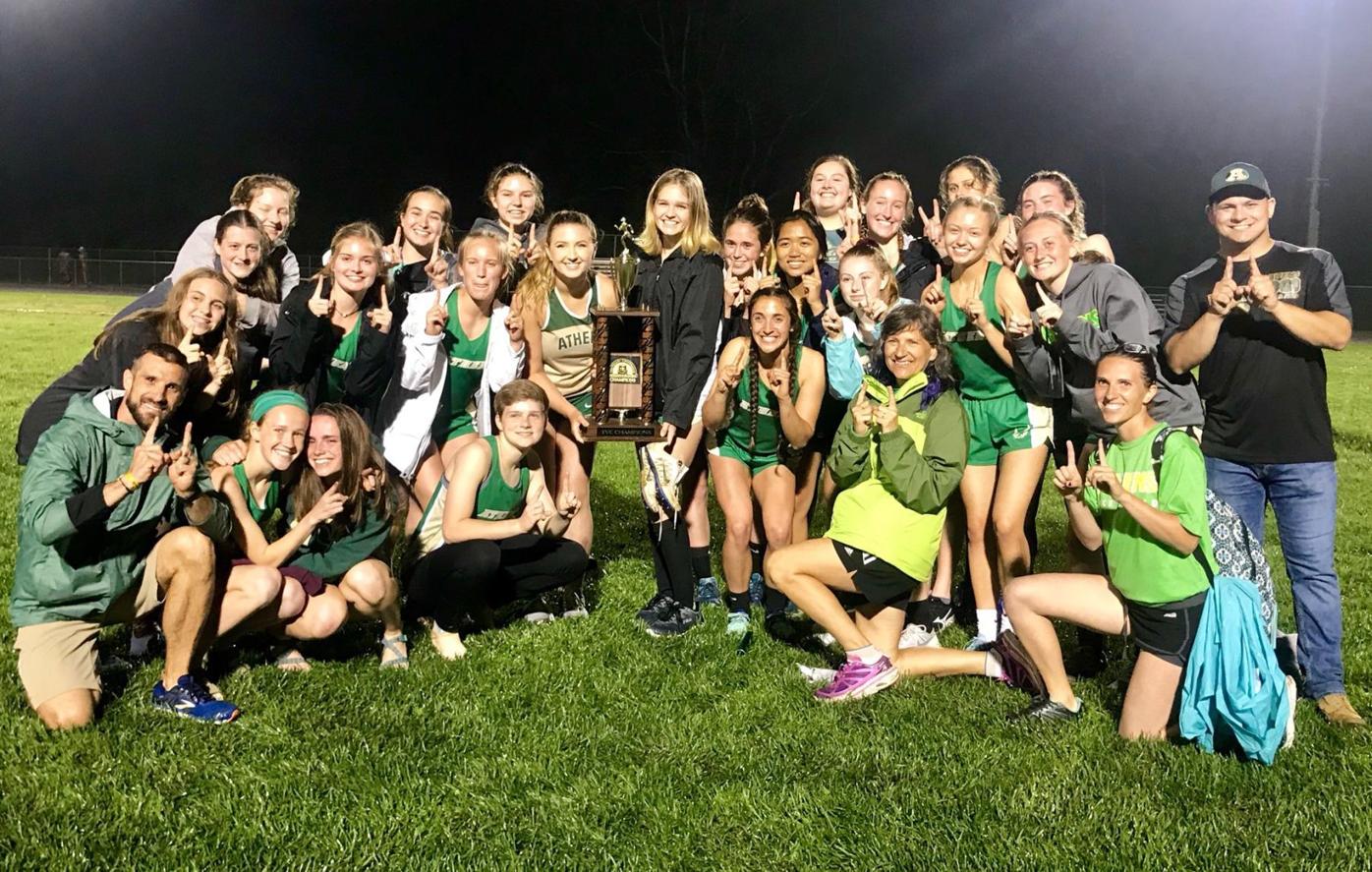 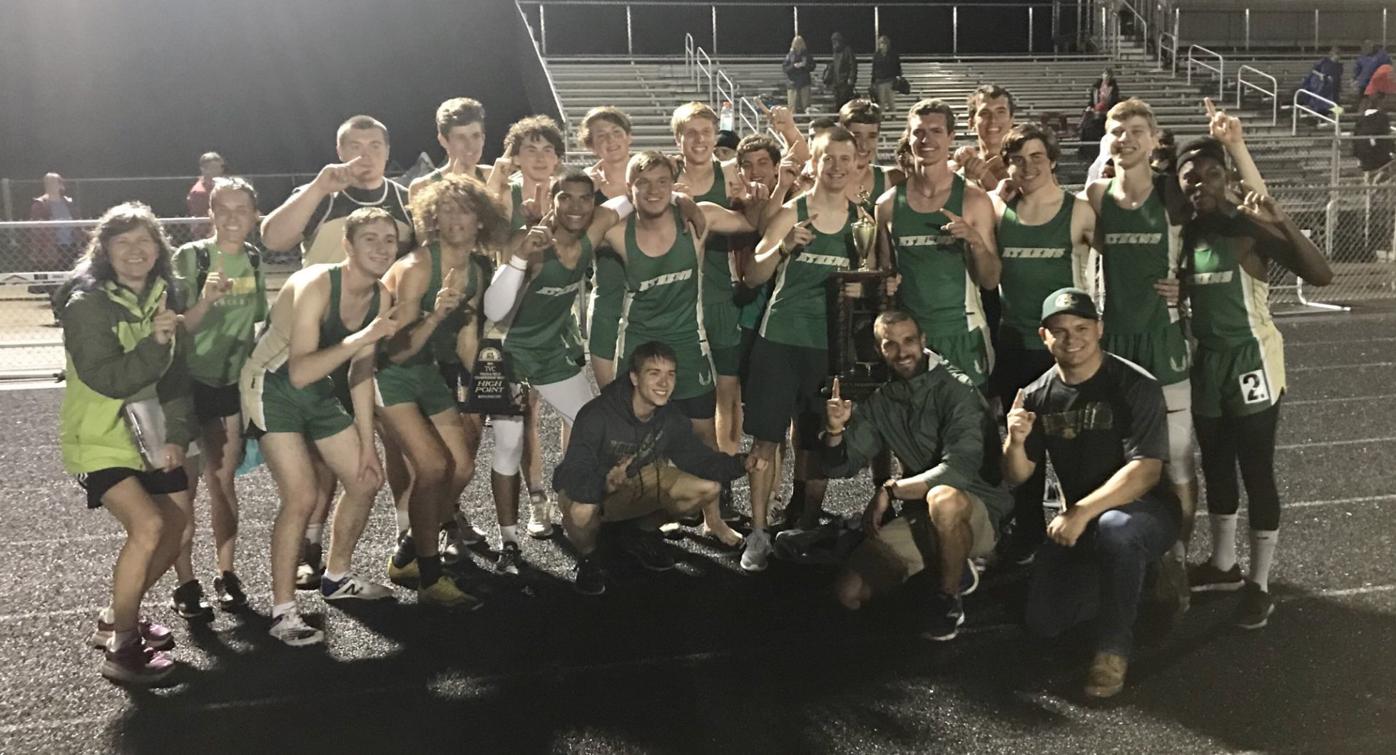 Members of the Athens boys track and field team celebrate after winning the 2019 Tri-Valley Conference Ohio Division title. The Bulldogs have won nine of the last 11 TVC-Ohio crowns. 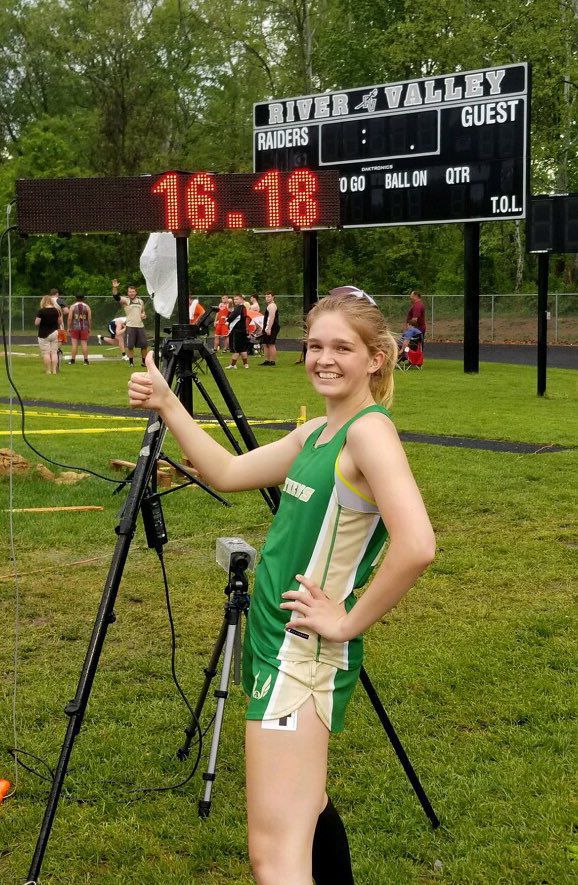 Athens senior Olivia Bean set a new school record in the 100 hurdles with a time of 16.18 seconds on Thursday in the Tri-Valley Conference Ohio Division track and field championships. Athens won boys and girls team titles in the meet held at River Valley High School.

Members of the Athens boys track and field team celebrate after winning the 2019 Tri-Valley Conference Ohio Division title. The Bulldogs have won nine of the last 11 TVC-Ohio crowns.

Athens senior Olivia Bean set a new school record in the 100 hurdles with a time of 16.18 seconds on Thursday in the Tri-Valley Conference Ohio Division track and field championships. Athens won boys and girls team titles in the meet held at River Valley High School.

Both the girls’ and boys’ Bulldog track and field teams won league titles in convincing fashion in a meet that was competed in rainy conditions at River Valley High School.

The girls totaled 175 points to win their 11th league title in a row. Athens has won the league meet in girls track and field every season that it has competed in the TVC.

The boys won with 173 points, ahead of second-place Nelsonville-York’s 119 points.

Athens’ depth was on display, as it won all eight relay races. The boys’ and girls’ teams combined for 16 first-place finishes.

The Bulldogs even saw a school record topple on Thursday. Senior Olivia Bean won the 100 meter hurdles with a time of 16.18 seconds to set a new Athens High School standard.

It was one of two individual wins for Bean. She also won the 300 hurdles with a time of 51.98 seconds.

Athens senior Tony Tonkovich set a new school record last week in the 3200. He’s such a versatile athlete that he won two TVC titles on Thursday without even competing in the 3200.

Tonkovich was also a member of two first-place relay teams in the 4x800 and 4x400, as he was the male high-point scorer.

Athens had four more individual first-place finishes. Raney Riddlebarger, a freshman, won the 1600 with a time of 5:34.05.

The Bulldogs also came out on top in every relay. The 4x800 teams started the day with victories to give Athens the early leads.

The girls’ 4x800 team of Camilla Hibbard, Sylvie Wilson, Sophia Tenoglia and Riddlebarger won with a time of 10:13.93.

The boys 4x800 winning time was 8:51.45 thanks to the team of Kieran Delach, Moss Conrad, Nicholas Moulton and Tonkovich.

Athens won the girls’ 4x200 relay with a time of 1:54.49. The team consisted of Charlotte Cutright, Emelia Adams, Isabella Tan and Abdella.

Athens’ girls team of Tan, Anna Welser, Cutright and Osha Backus were winners in the 4x100 at 53.72 seconds.

Nelsonville-York also had a strong showing with champions in eight events.

Justin Perry had a pair of individual crowns, winning both hurdle events. He was the champion of the 110 hurdles with a time of 15.91 seconds, as well as winning the 300 hurdles at 41.68 seconds.

Keegan Wilburn proved to be the fastest man in the TVC-Ohio, as he won the 100 meter dash. His winning time clocked in at 11.16 seconds.

Nelsonville-York sophomore Courtnee Heskett was the overall girls’ high-point scorer. She won the 200 meter at 27.12 seconds.

Alexander had a pair of TVC-Ohio champions in Taylor Meadows and Condy Richardson.

Meadows won the 100 meters in the closest finish of the night. She posted an official time of 13.05 seconds, which was in a virtual dead heat with N-Y’s Heskett.

Betzing came just short of her own TVC record of 17 feet, 7.50 inches, which was set a year ago.

Betzing is the most prolific long jumper in the history of the TVC. The previous record was 17 feet, 2 inches set by Trimble’s Taylor Savage in 2011. Betzing, who will join the Ohio University track and field team next year, has beaten that distance each of the last three seasons.

Nelsonville-York’s 4x200 relay team of Mohler, Bohyer, Charles and Wilburn were third at 1:39.11.

Hanna Cremeans was second in the high jump for Alexander, clearing 4 feet, 8 inches.

The Spartans’ team of Michael Kelly, Elijah Robe, Krestian Robe and Trey Schaller were second in the 4x200 at 1:37.78.

Alexander’s team of Meadows, Ervin, Richardson and Brylee Jones were also third in the girls’ 4x100 relay with a time of 55.32 seconds.

The boys’ long jump was not completed due to the weather.