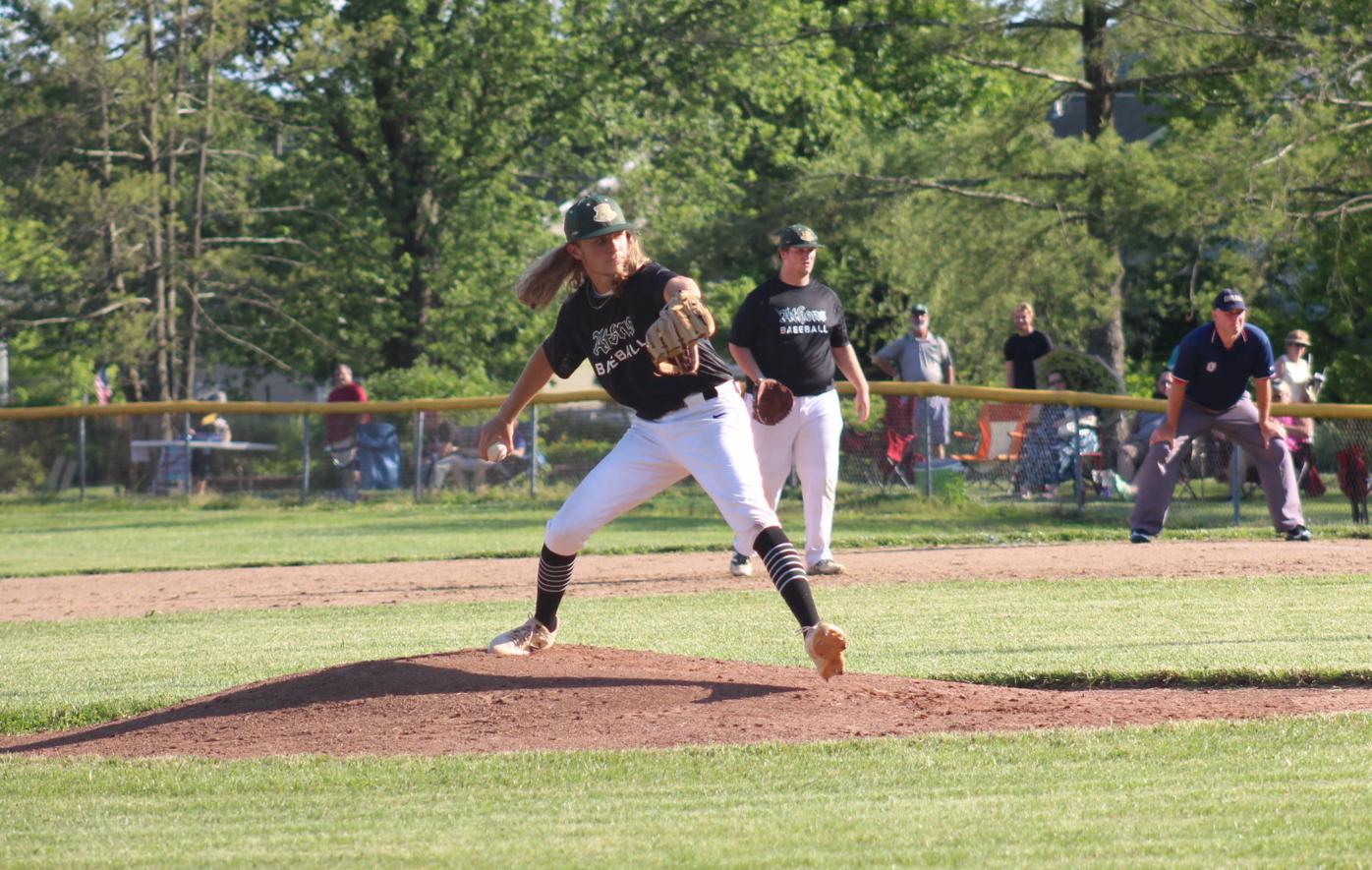 Athens’ Reece Wallace pitches during a game against Meigs last month. Wallace pitched a complete game during Athens’ win against Troy on Friday. 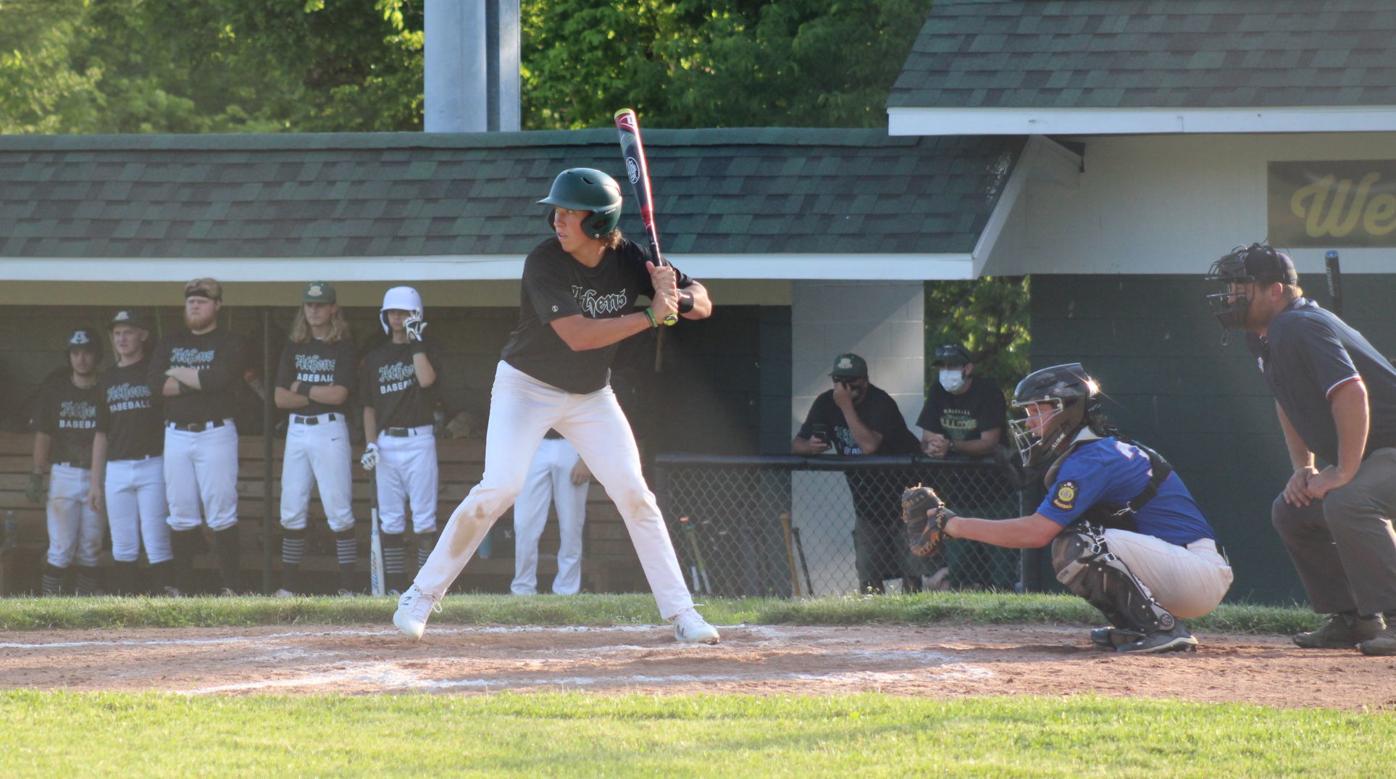 Athens’ Aiden Kostival awaits a pitch during a game against Meigs in June. Athens split a quartet of games in Lancaster last weekend.

Athens’ Reece Wallace pitches during a game against Meigs last month. Wallace pitched a complete game during Athens’ win against Troy on Friday.

Athens’ Aiden Kostival awaits a pitch during a game against Meigs in June. Athens split a quartet of games in Lancaster last weekend.

LANCASTER — The Athens Attack split a quartet of games during a sweltering weekend in Lancaster.

Athens started the tournament with a 6-2 win over Troy, followed by an 11-6 loss to Hilliard. Athens rebounded with a 5-3 win over Lancaster’s ‘Blue’ team, before finishing with a 5-3 loss to Greenville on Sunday.

Reece Wallace got things started with a complete game victory during the 6-2 win over Troy.

Wallace worked all seven innings without allowing an earned run. Troy’s runs were both unearned, as Wallace struck out five and walked three. He surrendered just five hits, three of which were singles.

Wallace got all of his run support in the top of the second thanks to a six-run Athens inning. Troy then scored single runs in the fourth and fifth innings.

Peyton Gail was 2 for 5, including a double, with an RBI in the win. Jack Cornwell had a hit, walk and run scored, while Carson Baker had a hit, run, RBI and walk. Aiden Kostival had a single and two RBIs, also scoring a run. Rece Lonas added a single and walk, while Andrew Stephens and Wallace each scored a run. Will Ginder drew three walks, scoring once and driving in a run.

Johnny Baileys led Troy with two hits and a run. He also was the losing pitcher, giving up five runs on two hits and three walks in 1 1-3 innings.

Athens came back on Saturday for two games, losing the first to the Hilliard Colts Elite, 11-6.

Athens had 11 hits in the loss. Gail hit another double, going 3 for 5 with two runs scored.

Baker was 3 for 4 with two RBIs, while Cameron Niese was 2 for 2 with two walks and a run scored. Kostival also had two hits. Stephens added a hit, RBI and walk. Nate Trainer drew two walks, scoring a run.

Cameron Medley enjoyed a big day for Hilliard, going 4 for 5 with four RBIs and two runs. He hit a home run and a double.

Athens came back later on Saturday afternoon for a 5-3 win over Lancaster’s ‘Blue’ squad. It was a comeback for the Attack, as Lancaster led 2-1 before Athens scored four times in the bottom of the sixth.

Cornwell pitched a complete game for the win. He allowed three earned runs on six hits, a walk and a strikeout in seven innings.

Ty Barnes was 2 for 3 for Lancaster.

Athens concluded the tournament with a Sunday morning first pitch against the Greenville Thunder. Athens gave up four runs in the final two innings to fall, 5-3.

Athens scored three runs in the bottom of the third to lead 3-1. Greenville scored three times in the sixth, and added an insurance run in the seventh.

Athens finished with seven hits from seven different players. Cornwell hit a double. Trainer and Lonas each had a hit and run scored. Baker had a hit and two RBIs, while Jeremy Colburn, Shane McDade and Levi Moore each hit singles. Moore also drew a walk and scored a run, while Niese collected an RBI.

Titan Grote and Brody Williams each had two-hit games for Greenville.

Ginder started and pitched four innings for Athens, giving up an earned run on two hits. Niese pitched a 1-3, giving up three earned runs on four hits and three walks. He took the loss. Gail pitched the final 1 2-3, allowing an unearned run on a hit with two strikeouts.

Tyler Beyke pitched five innings and earned the win after Greensville’s comeback. He allowed three runs on seven hits and a walk, striking out six. Trent Collins pitched the final two innings for the save, walking one and striking out one.

Athens is 9-9 on the summer season.

Athens will return home to Rannow Field on Wednesday against Parkersburg at 6 p.m.

Athens will also travel to Chillicothe on the weekend to take part in a round-robin tournament. It’s a six-team tournament, with Chillicothe 757, Troy Post 43, Ohio Bison 18U, Guernsey County Miners 18u and the Dayton Classics also participating.