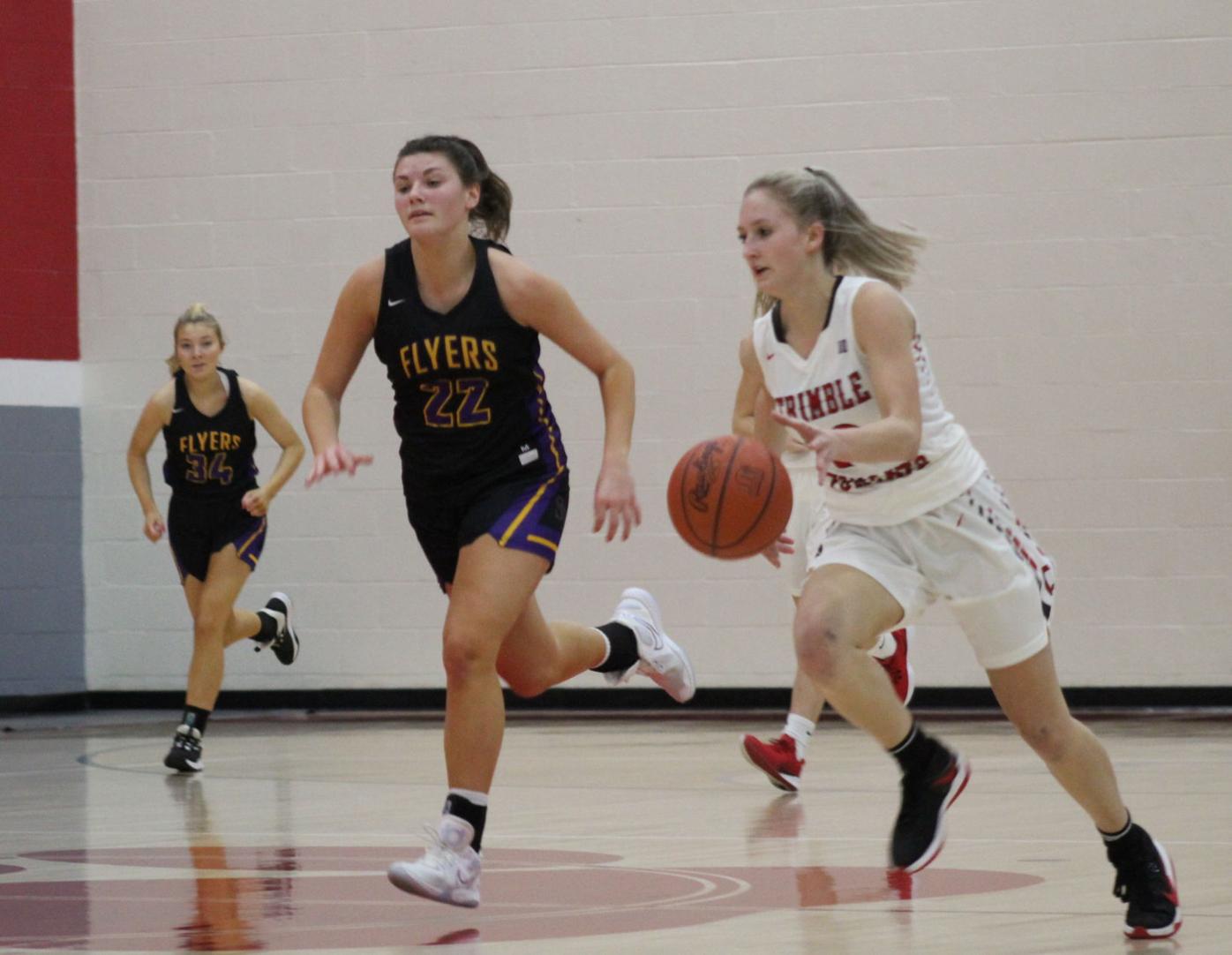 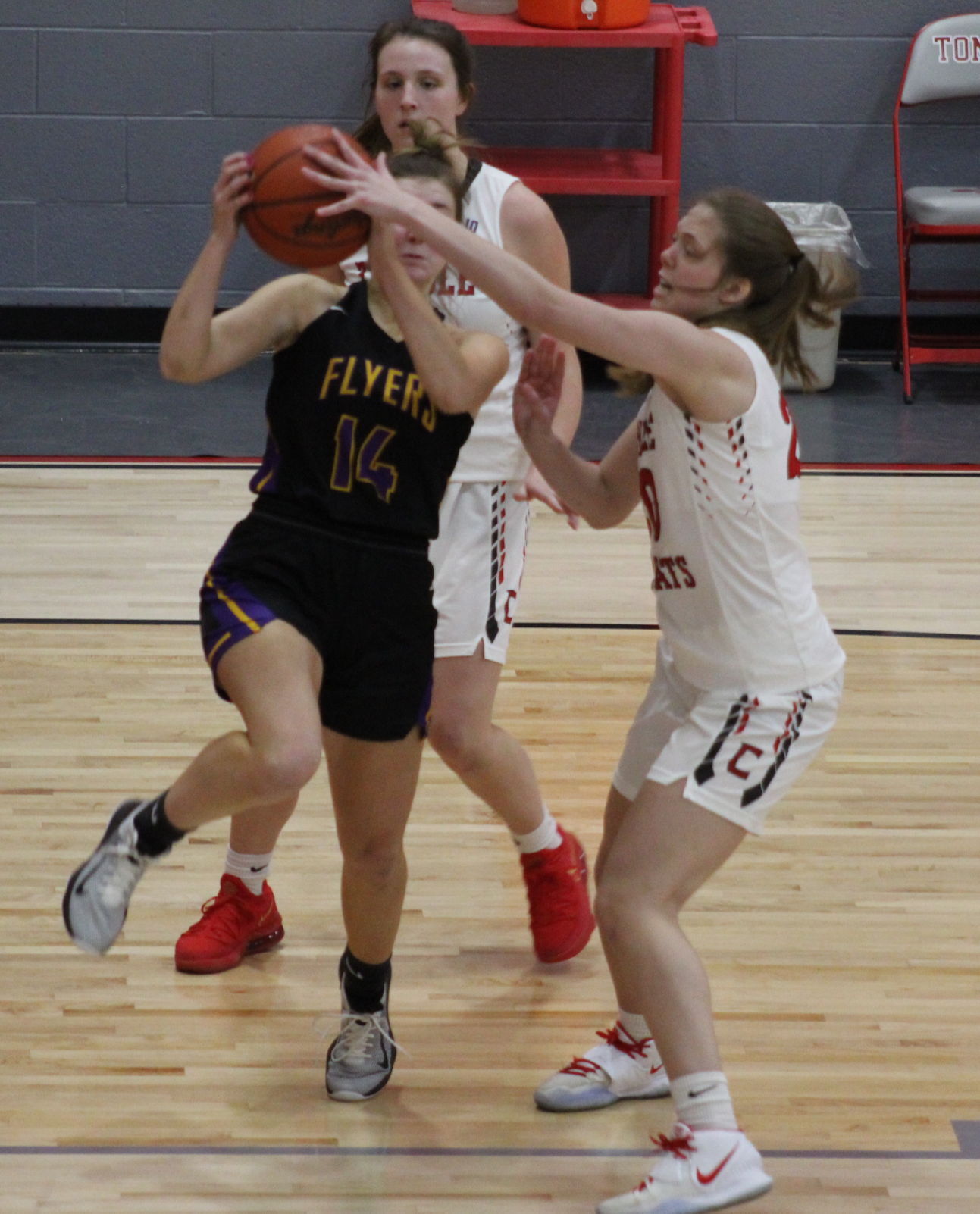 GLOUSTER — A loss at Waterford still fresh in her mind, Trimble junior Jayne Six said the Tomcats needed something to feel good about.

Cutting down the nets as sectional champions was just what the doctor ordered.

Six and the No. 3 Tomcats dominated No. 14 St. Joseph 63-19 on Saturday in a Division IV sectional final inside William White Gymnasium.

“It feels great,” Six said. “After our last loss Wednesday, we really needed something to come back from. It’s really good for all the team. We came out with something to prove and I think we did just that.”

The loss to Waterford denied Trimble and outright Tri-Valley Conference Hocking Division championship, as the Wildcats and Tomcats officially split the top spot this season.

That disappointment was washed away by the simple fact that it’s now tournament time, and the Tomcats have more goals to chase.

“It just hit to the heart that we had to share it, but it’s a whole new season,” Six said. “Everyone starts out 0-0, so it doesn’t really matter who you play. You just have to play your all.”

It was hard to find many faults in the Tomcats’ performance. Four players hit double figures as they won their eighth sectional title in program history.

After a 10-year drought, the Tomcats have won consecutive sectional championships. They were able to cut down the nets on their home court, as COVID-19 protocols have the higher seed hosting games through the district semifinals.

“Can’t take anything for granted because you don’t know what’s going to happen year to year,” Trimble head coach Joe Richards said, as he wore the net around his neck.

The Tomcats’ defense was relentless, forcing turnovers and pushing the pace in transition most of the first three quarters.

“We wanted to play defense up in them and obviously one of our main game plans was to get out and run,” Richards said. “Not let them set up their zone, because they play a pretty good 2-3 zone. I thought we accomplished both.”

“She’s just a great all-around player — driving, shooting, rebounding,” Six said of Imler. “For a guard, she can jump up above everybody. She also sets the tone because she finds everyone on the court.”

“Once (Imler) got the steal or outlet pass, we had somebody, whether it was Briana (Orsborne) or Emily (Young), we had somebody up the floor and she put it right on the money most of the time,” Richards said.

Six led the Tomcats (17-4) in scoring with 18 points, making 8 of 11 shots from the field. Her first six shots of the night were good, as she also added seven rebounds and three steals.

Six even got out and ran her own fast break. On two occasions, she found herself in the open court after a steal, driving all the way to the basket to complete the transition opportunity against a defender.

Despite showing off her wide array of skills, Six said she won’t be taking away point guard duties from Imler any time soon, however.

“It’s not really something I try to do,” Six said with a laugh. “It’s like, I can do this and everything, but I’ll be honest with you, afterwards it’s exhausting. I don’t know how she (Imler) does that, I’m going to be honest.”

The Tomcats did all of their offensive damage with only attempting eight 3-pointers, making two. They made 27 of 42 shots (64.3 percent) from 2-point range.

Trimble led 14-8 after six consecutive Flyer points in the first quarter before going on an extended run that allowed the second half to be played under a running clock due to a 35-point lead.

The Tomcats scored 12 points in a row to lead 26-8 after Imler grabbed a rebound and flew the other way for a lay-in.

St. Joseph’s Bella Whaley scored with 5:38 left in the first half to end that run, but it would prove to be the Flyers’ final basket until the fourth quarter.

Trimble scored the final 17 points of the second quarter to lead 43-10 at halftime. The final stretch saw Imler drain a 3-pointer, then assist on one of Orsborne’s baskets before she closed the half with a steal and transition layup.

The Tomcats continued to roll in the second half, shutting the Flyers out during the third quarter. That led to a 57-10 lead after a Sophia Ives’ field goal late in the third.

The Flyers went on to score nine points in the final quarter. Bella Whaley scored 10 points while Emma Whaley added nine points to account for all of their scoring.

The Tomcats set their sights on No. 6 Paint Valley, a 58-38 winner on Saturday over No. 11 Manchester.

Trimble will host Paint Valley on Thursday at 7 p.m. in a district semifinal. It will the the Tomcats’ final home game no matter what, as the district finals and beyond will be played at neutral sites.

“We want as many fans we can get, that’s safe,” Six said. “We really hope to get to the district finals because, once again, unfinished business from last year. We’d really like to make it to regionals and cut down another net.”

The Tomcats are a win away from a potential district final rematch with Peebles, the team that beat the ‘Cats in the district finals a year ago.

No. 2 Peebles will host No. 7 Belpre in another district semifinal on Thursday.

“Last thing we just told them was when we have all 15 of them and we’re going to go out there and play as hard as we can, we’re going to be a tough out for anybody,” Richards said. “We’ll be ready Thursday night here.”