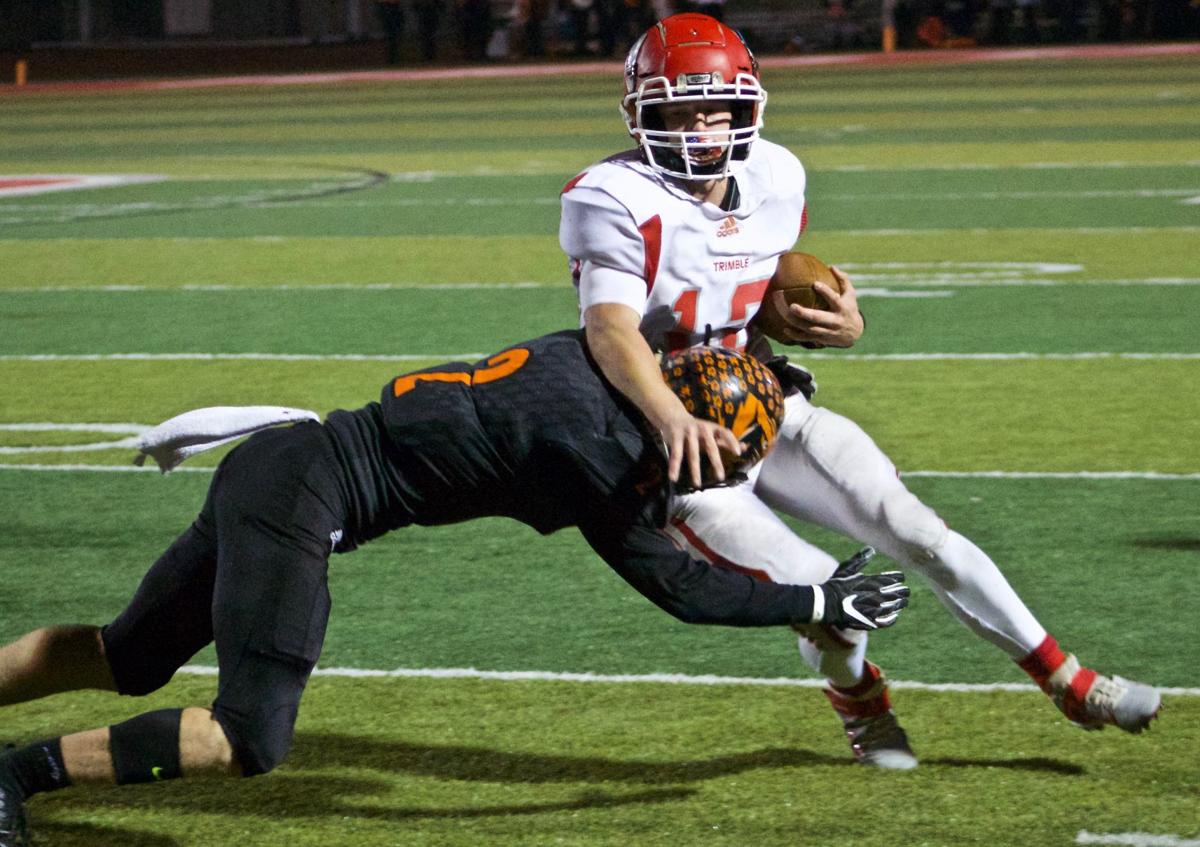 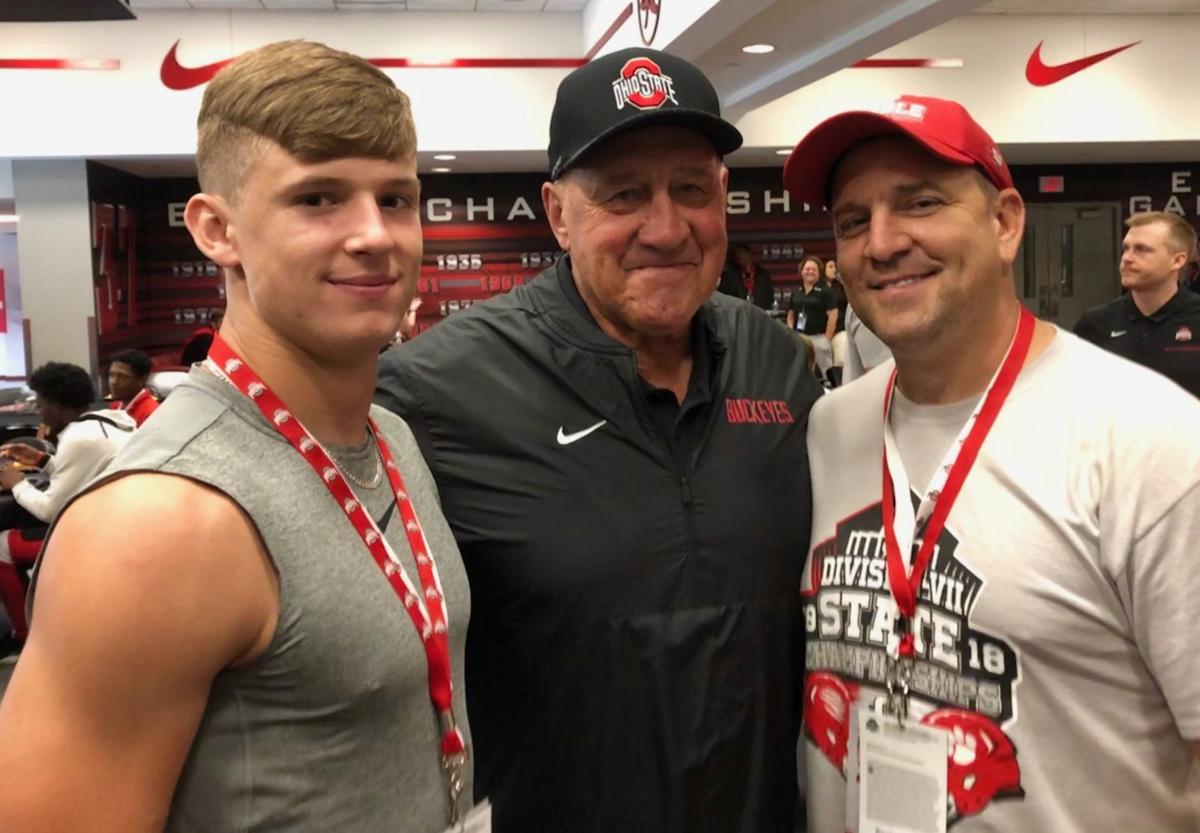 Trimble senior Cameron Kittle (left) and his father Reuben Kittle (right) meet with OSU co-defensive coordinator Greg Mattison during a visit prior to the Buckeyes’ game against Cincinnati in the fall of 2019.

Trimble senior Cameron Kittle (left) and his father Reuben Kittle (right) meet with OSU co-defensive coordinator Greg Mattison during a visit prior to the Buckeyes’ game against Cincinnati in the fall of 2019.

You can’t go out, your routines are upset, and each day seems to bring a new level of uncertainty.

But he’ll get through it. The Trimble High School senior has a goal and that’s given him a clarity of purpose.

“The only thing I’m trying to think about is myself and what I need to do,” said Kittle Wednesday. “I’ve got to be focused.

“The good thing is there isn’t any distractions right now.”

Kittle, in early March, announced he’ll be joining the Ohio State football program as a preferred walk-on for the 2020 season. A three-year standout for the Tomcats on the gridiron, Kittle will now try to carve out a niche at one of the biggest football programs in the country.

“Looking at it from the football side of things, if you get this opportunity and you don’t take it? I think you’re pretty crazy,” he said.

So how does a player at Trimble, just three students above the cutoff for the smallest school designation in Ohio high school football by the OHSAA, get a PWO offer from OSU?

First, Kittle (6-foot-1, 180 pounds) is one of the best athletes the school has produced. Kittle played quarterback on offense for the Tomcats, and helped a three-year run with a 33-6 record, six postseason wins, and one state runner-up in Division VII in 2018.

Kittle had the quickness, and speed, to be a lethal dual-threat QB for Trimble. He nearly threw, and rushed, for 1,000 yards apiece for the Tomcats in 2019, and accounted for 26 touchdowns. But for long-time head coach Phil Faires, it was his intelligence and toughness that separated Kittle from the pack.

“We let him call a lot of plays,” Faires said last fall. “We give him options, tell him what to look for, but he’s making the call a lot of times up there.

“And people always forget how fast he is.”

Kittle was a first team all-league, and all-district pick as a QB in 2019, and finished as the Second Team All-Ohio quarterback in Division VI. But those instincts, and athleticism, showed up just as much on defense where Kittle was a deep safety for a Trimble defense that posted a combined 17 shutouts (over 27 games) in 2018 and ’19.

And it’ll be as a defensive player where Kittle will likely get a shot to earn a spot at OSU whenever the sporting world resumes.

“My whole career everyone knew I was more of an athlete than a traditional quarterback,” Kittle said. “Just put me anywhere. Anywhere I can help.”

Kittle was also a multi-sport standout. He was a four-year starter on the basketball team — with 73 wins for head coach Howie Caldwell — and vital cog in the Tomcats’ 22-5 season this winter. He was a two-year starter at second base for Faires on Trimble’s baseball team.

But Kittle’s PWO offer wasn’t just based in Xs and Os, or talent. Ed Terwilliger is OSU’s Director of High School Relations and has been with the Buckeyes since 2015. He’s in charge of many aspects of the walk-on program.

But before setting up in Columbus, Terwilliger was a legendary high school coach — and before that he was an Athens County product. Terwilliger is a 1975 graduate of Nelsonville-York High School, played at and attended Ohio University, and before embarking on a 24-year stint as the head coach at Olentangy High School, Terwilliger served one fall as an assistant at Trimble (1979).

Faires and Terwilliger have known each other for decades. So when Faires mentioned to Terwilliger about a player he had at a camp, Terwilliger didn’t blow it off.

That relationship was the seed that led to an 18-month recruiting relationship — with visits and meetings with OSU co-defensive coordinator Greg Mattison and OSU assistant director of player personnel Justin Perez — that culminated in Kittle’s March 6 announcement.

But everything since has been surreal.

For now, Kittle is sometimes using a make-shift weight room in a friend’s basement, or doing footwork drills in the parking lot of the marina next to where he lives near Burr Oak Lake. And there’s always the big sloping hills next to the lake to work on speed and acceleration drills.

Kittle’s announcement wasn’t the end of the line for him, but the start of the next step. He’s eager to get to OSU and get started in the school’s aviation program, but what’s driving him now, why he has that purpose that many are finding tough to come up with during these days of social distancing and quarantines, is the prospect of being a Buckeye.

He’ll have to earn his spot. As a preferred walk-on, he’ll be treated like — and asked to do as much — as any other player on the roster, but won’t be on scholarship. Any doubts he had initially were eased by a letter he received earlier this month from Tom Heffelfinger, an assistant football coach at Urbana University.

Heffelfinger was a walk-on at OSU during the final two years of Jim Tressel’s era with the Buckeyes. He was not asked to return as a walk-on when Urban Meyer was hired.

Still, Heffelfinger wrote about the benefits of the experience and how it continued to help him until this day.

“It was a long letter, and it was great,” Kittle said. “It just took all of this to a new level of excitement.”

So Kittle has an opportunity. He’s determined to make the Buckeyes’ roster and excited about the possibility, and knows it wouldn’t be possible without the unique environment he got to be a part of at Trimble.

“From Coach Faires, Coach (Brady) Trace, coaches Jacob Koons and Austin Downs, all my teammates, they were my brothers that made this all possible,” Kittle said. “And my family. They pushed me even when things were tough.”

Kittle, like any football player in Athens County, knows full well how the story of the last county quarterback who went to OSU turned out. And yes, Kittle even credits 2019 Heisman Trophy winner Joe Burrow with a slice of credit for this chance.

“Really, it does give us sort of an edge,” Kittle said. “People know where Athens County is now.

“And they can say whatever they want about us, but no one can ever take that away.”