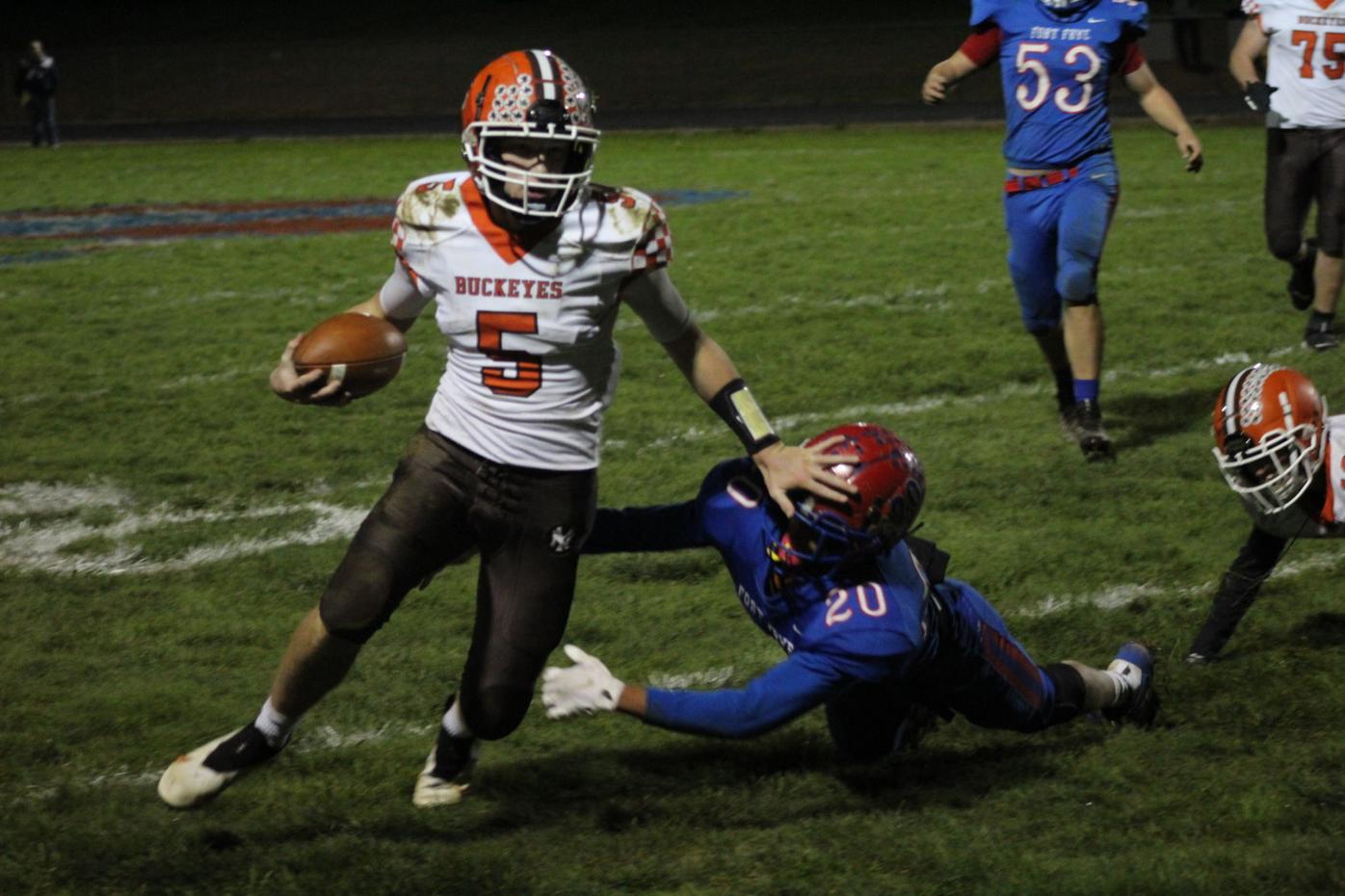 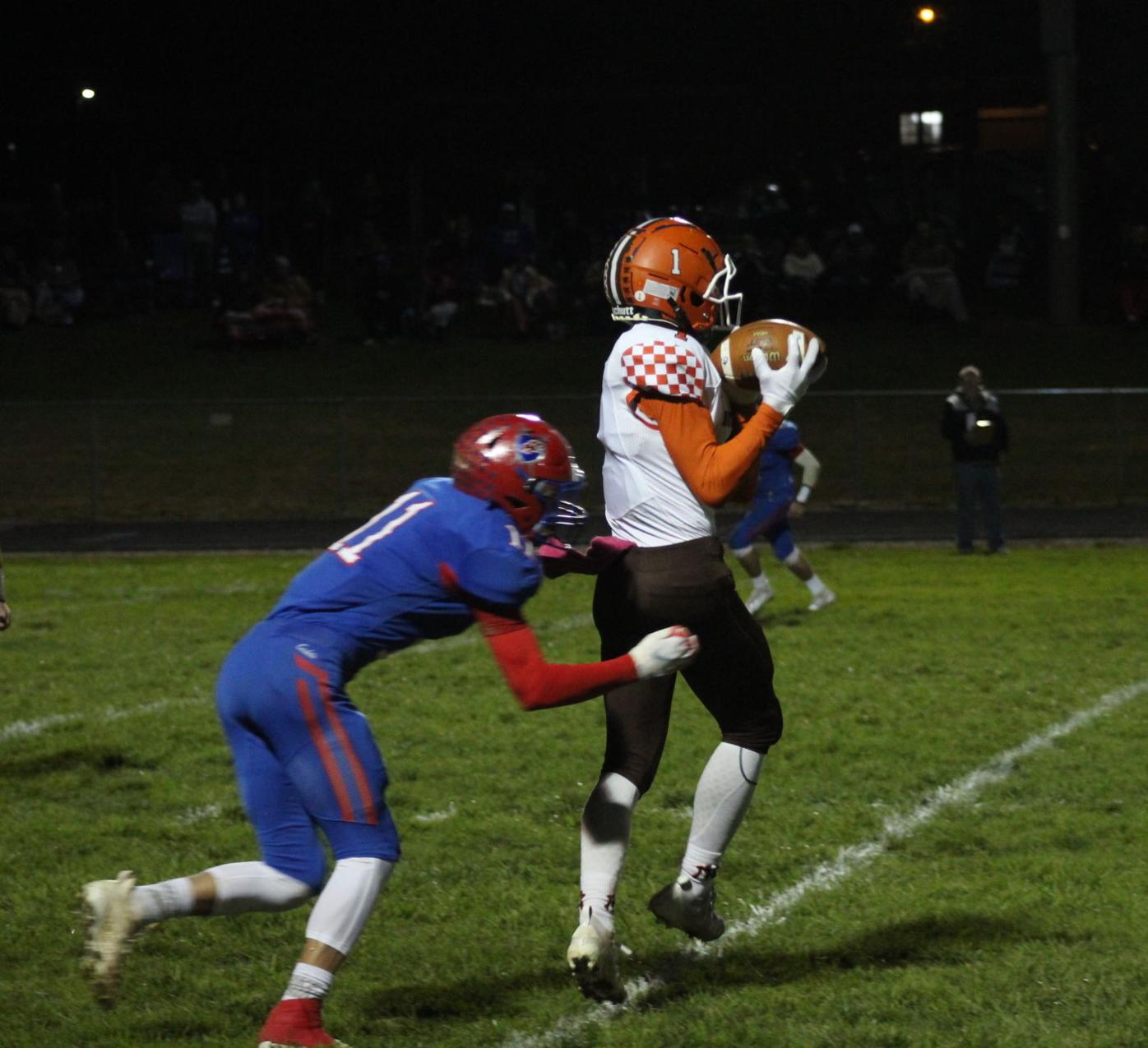 BEVERLY — The Fort Frye Cadets have plenty of offensive weapons, and the Nelsonville-York Buckeyes seemingly got a good look at all of them on Saturday.

The No. 1 Cadets powered their way to a 36-6 victory in a Division VI, Region 23 quaterfinal against No. 8 Nelsonville-York.

The Buckeyes had won eight games in a row, but saw their season end on Fort Frye’s home field.

“They’re so physical and they’re quick,” Nelsonville-York coach Rusty Richards said. “They don’t have the big 280-pound kids, but they’re all quick. They’re 220, 230 (pounds) — they run around like fullbacks. They’re so fast.”

“They have so many running backs it doesn’t matter who’s back there,” Richards said. “They’re all good.”

While the Cadets’ focus was running the football, senior quaterback Ian Ellis proved to be a threat in the passing game.

“The quarterback’s the key to it all,” Richards said. “He does pretty well with that timing.”

Ellis and the Cadets displayed their passing ability on their first drive.

A penalty had Fort Frye facing a first-and-32 from N-Y’s 26-yard line.

The Cadets came out firing, with Ellis finding a streaking Long downfield.

Long got behind the Buckeyes’ defense for a 74-yard scoring strike, and a 6-0 lead.

“They’re so used to ground and pound, they went to five wide on us and we just didn’t get checked into our cover four,” Richards said. “Which is crazy, because we’ve done that eight of the last 11 weeks against all these spread teams. But they sort of surprise you. They throw everything at you. They’ve got a heck of a ball club over here.”

The Buckeyes (8-4) were able to find success offensively, but couldn’t finish off drives.

Nelsonville-York’s first possession was 12 plays, and the Buckeyes were as deep the Cadets’ 18-yard line.

Fort Frye brought pressure against N-Y quarterback Drew Carter. Elijah Johnson recorded a sack on third down, and Hunter Kesselring and Caleb Riggs combined for a fourth-down sack to push the Buckeyes back.

The Buckeyes had three drives that went at least to Fort Frye’s 22-yard line without scoring points.

“A team like Fort Frye, you have to score with them,” Richards said. “We just sort of shot ourselves in the foot. One time we had a penalty. They’re almost at that level where you have to play a perfect game and we didn’t tonight.”

Perhaps the game-changing sequence came on the Buckeyes’ next drive. Carter completed a third-and-five pass to Makhi Williams, and the ball was initially spotted as a six-yard gain, and a first down.

After conferring with each other, the officials moved the ball back four yards to the 30-yard line, and the Buckeyes had to punt.

Long scored on the next play, and Ellis’ 2-point conversion pass to Quentin Huck had the Buckeyes facing a 22-0 deficit.

The Buckeyes got to within 22-6 at halftime thanks to Hudson Stalder’s 1-yard run, capping a seven-play, 71-yard scoring drive. Carter completed passes of 24 yards to Gavin Richards and 18 yards to Keagan Swope.

Nelsonville-York wasn’t able to build off the momentum in the third quarter. The Buckeyes got a defensive stop, then had a first down at Fort Frye’s 22-yard line after Carter’s 23-yard pass to Leighton Loge.

A holding penalty pushed the Buckeyes back, and the Cadets forced two incomplete passes to end the drive.

Fort Frye scored on its next two possessions, a 5-yard run for Brown making the score 28-6, then Powell’s 67-yard run ending the scoring with 37 seconds left in the third quarter.

Fort Frye advances to the Division VI, Region 23 semifinals against Barnesville (10-1), a 28-20 winner over KIPP Columbus on Saturday.

Carter completed 11 of 19 passes for 118 yards, adding 65 yards rushing on 16 carries in his final game for the Buckeyes.

Stalder had 32 yards on 11 carries, while Loge had 52 yards on three receptions. Gavin Richards added 41 yards on two catches.

The Buckeyes weren’t able to get past Fort Frye, but overcame plenty of obstacles along the way to get to week 12.

The Buckeyes were led not only by Cater, but senior two-way linemen Nathan Martin, Dominik Robson and Tucker Levering. The trio all started since their freshmen or sophomore seasons, and will be missed next season.

Richards said the entire senior class made their mark with Buckeye football.

“These seniors are just hard workers,” he said. “They just kept showing up every day, showing up with smiles on their faces. That’s what we told them, be proud of where you came from. Walked out with a league title after losing all those seniors (in 2020).

“There’s a lot to be proud of. These kids all went out winners in my book. Glad I got to coach these boys the last four years because they’re some of the hardest workers I’ve had come through the program.”