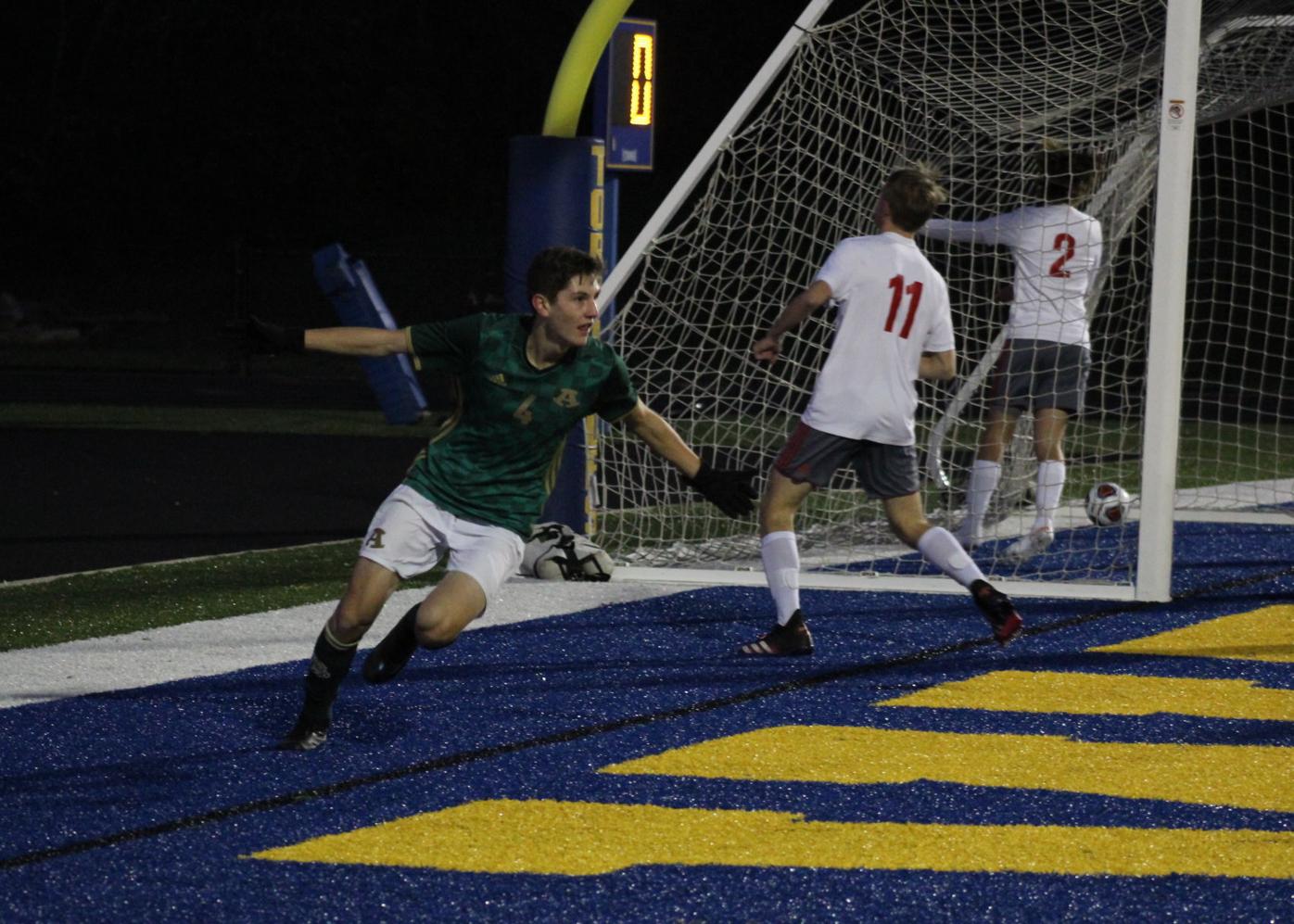 Athens sophomore Austin Jaunarajs (4) celebrates after scoring the first goal on Wednesday in a Division II, Region 7 semifinal against Dover. The Bulldogs won, 5-3, to advance to the regional finals. 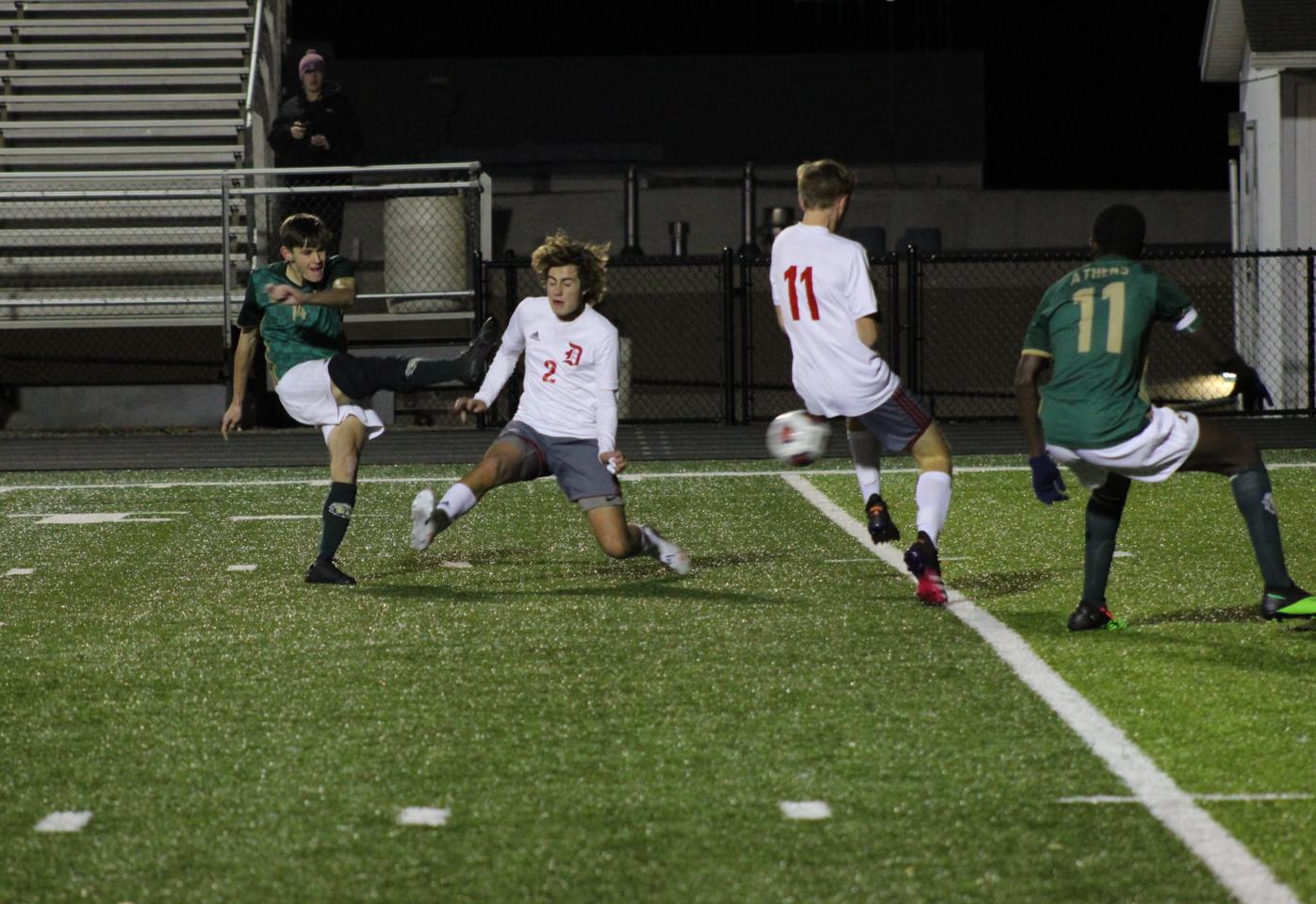 Athens junior Brady Jaunarajs (14) rips a shot past Dover’s Eli Worst (2) and Eric Smith (11), while teammate Walji Dadem (11) looks on. Jaunarajs scored on the play, one of three goals on the night to lift Athens to a 5-3 victory. 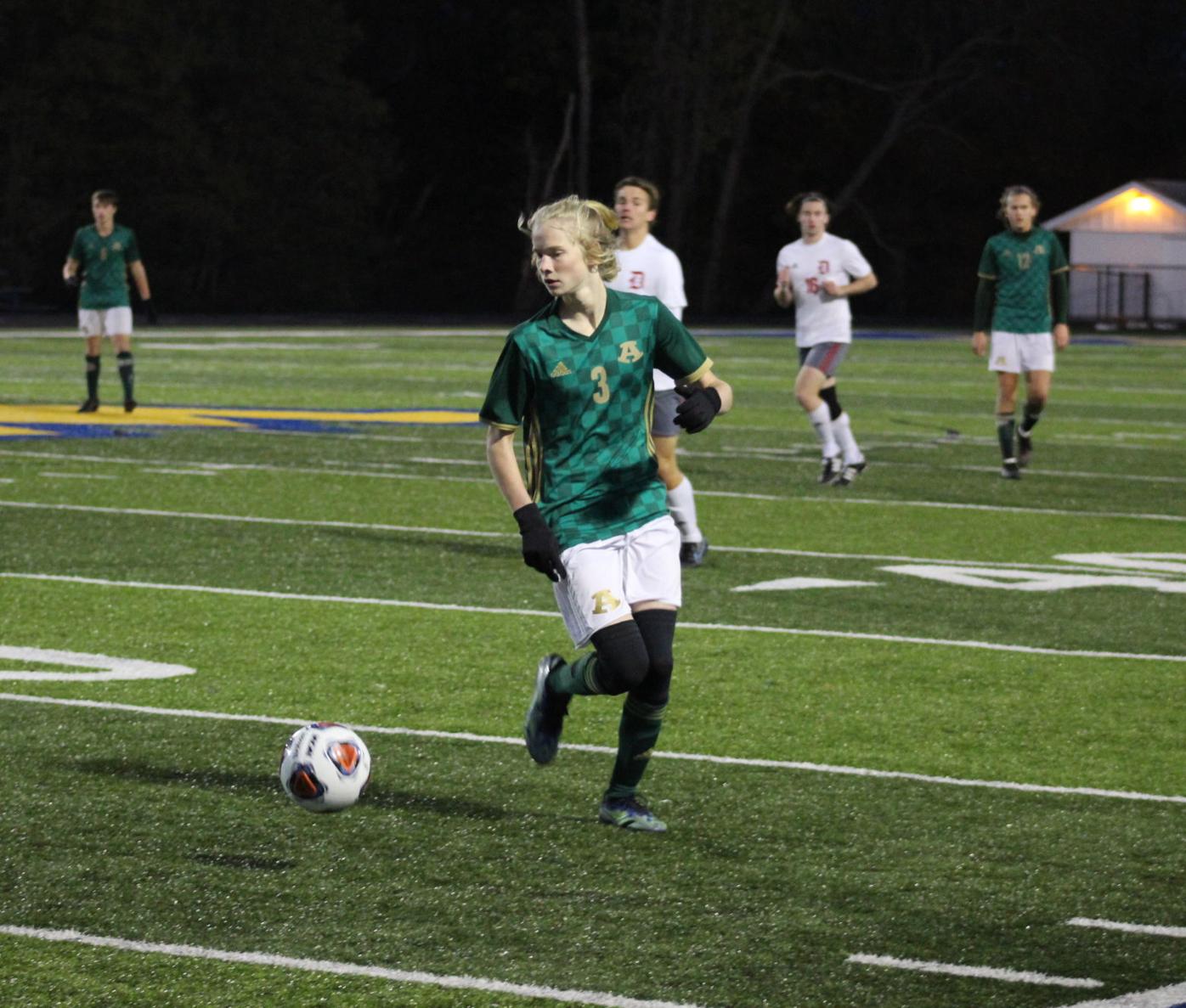 Athens junior Luke Scanlan tracks down the ball on Wednesday in a Division II, Region 7 semifinal at West Muskingum High School. Scanlan had a goal and an assist in Athens’ 5-3 win over Dover.

Athens sophomore Austin Jaunarajs (4) celebrates after scoring the first goal on Wednesday in a Division II, Region 7 semifinal against Dover. The Bulldogs won, 5-3, to advance to the regional finals.

Athens junior Brady Jaunarajs (14) rips a shot past Dover’s Eli Worst (2) and Eric Smith (11), while teammate Walji Dadem (11) looks on. Jaunarajs scored on the play, one of three goals on the night to lift Athens to a 5-3 victory.

Athens junior Luke Scanlan tracks down the ball on Wednesday in a Division II, Region 7 semifinal at West Muskingum High School. Scanlan had a goal and an assist in Athens’ 5-3 win over Dover.

“We did some research on their team and we figured out they play with a high in a five defense,” Jaunarajs said. “So we came up with a tactic to put the ball through and I was able to finish it.”

Jaunarajs recorded a hat trick in the first half alone, as Dover was unable to slow down the Bulldogs’ offensive attack.

The Bulldogs (13-3-4) advance to a regional championship on Saturday against Unioto.

Athens gets the shot to play for a spot in the state tournament after jumping ahead to an early lead against the Crimson Tornadoes (15-5).

The Bulldogs’ first goal came less than five minutes into the game, and they lead 3-0 before the first half was 20 minutes old.

Brady Jaunarajs and his brother, sophomore Austin Jaunarajs, were a handful for Dover.

Not only did Brady register three goals, but Austin had a goal and two assists.

“We grew up playing together,” Brady Jaunarajs said. “We’ve played together for almost 10 years now. It’s amazing playing with him and our chemistry is unmatched in the league.”

Austin Jaunarajs opened the scoring for Athens, getting a feed from Luke Scanlan to left of the net and beating Dover goal keeper Grant Mastrione just four minutes and 54 seconds into the regional semifinal.

The rest of the half was Brady Jaunarajs doing damage against Dover.

His first goal was set up by Austin Jaunarajs, as he was also able to beat Mastrione with a shot to the keeper’s right.

Athens led 2-0 with 30:56 still to play in the first half, and would never again have its lead dip below two goals.

“At this point right now it’s about instruction,” Diki said. “Also, the physicality of the game. They did well. They followed all the instructions we told them and they deserved this victory.”

Brady Jaunarajs struck again with 21:44 left in the first half. Braulio Rosas-Clouse sent a pass ahead to a streaking Brady Jaunarajs.

Jaunarajs controlled the pass and powered forward against Mastrione, at the same time a Dover defender was on his hip.

Jaunarajs couldn’t be stopped, firing his second goal into the net to give Athens the 3-0 advantage.

Dover managed enough offense to attempt to stay in the game. Its first goal from Evan Burrier, who was able to punch home a loose ball in front of the net, cut Athens’ lead to 3-1 with 13:48 left in the first half.

The Crimson Tornaodes would struggle to gain any momentum as long as the Jaunarajs brothers were attacking.

Austin sent another long pass forward to Brady, who once again beat the defense and drilled a shot through a pair of Dover defenders. The score completed his hat trick and gave the Bulldogs a 4-1 lead with 5:38 left in the half.

“When you score early, it’s always a big boost to the team,” Brady Jaunarajs said. “You just want to start early and keep pounding them, really.”

The only hope for Dover came at the end of the first half, Ethan Kopp’s goal cutting Athens’ lead to 4-2 with 33.5 seconds left in the half.

It might have seemed like the Crimson Tornadoes took some momentum into halftime, but that was quickly squashed by another Bulldog runout.

This time it was Russell Otieno leading the charge, as he found Scanlan for a goal just two minutes and three seconds into the second half.

The Bulldogs were now comfortably ahead 5-2.

“To start the second half with a goal, to put that lead to three at the start was a good morale boost,” Brady Jaunarajs said. “Pushed us through the game.”

Dover’s final goal came from Reese Utter with 8:20 to play.

Athens goal keeper Nathan Kallet thwarted numerous chances for Dover to get closer, however, finishing with five saves. He slid to kick away a scoring opportunity with five minutes left that could have gotten the Crimson Tornadoes to within one goal.

“I don’t have words right now because this is everything for us,” Diki said. “We have a great defense.”

It’s the second time in the last four seasons the Bulldogs have advanced to the regional championship game, as they also were in the Eight Eight in 2018.

Athens lost to Columbus DeSales that season. The Bulldogs will get a rematch this year against a Southeast District team in Unioto.

The Tanks rallied past St. Clairsville 3-2 on Wednesday in the other semifinal, which was played in Cambridge. Unioto trailed 2-0 but eventually won on a penalty kick with 7:20 remaining.

The Bulldogs are 7-0-1 since that defeat, and get a shot at revenge. If they succeed, they’ll claim the first regional title in program history.

The regional championship game is scheduled for Saturday at 3 p.m. at Zane Trace High School.

“It would be amazing,” Brady Jaunarajs said of the opportunity. “Just make school history and Athens and everyone around here proud.”