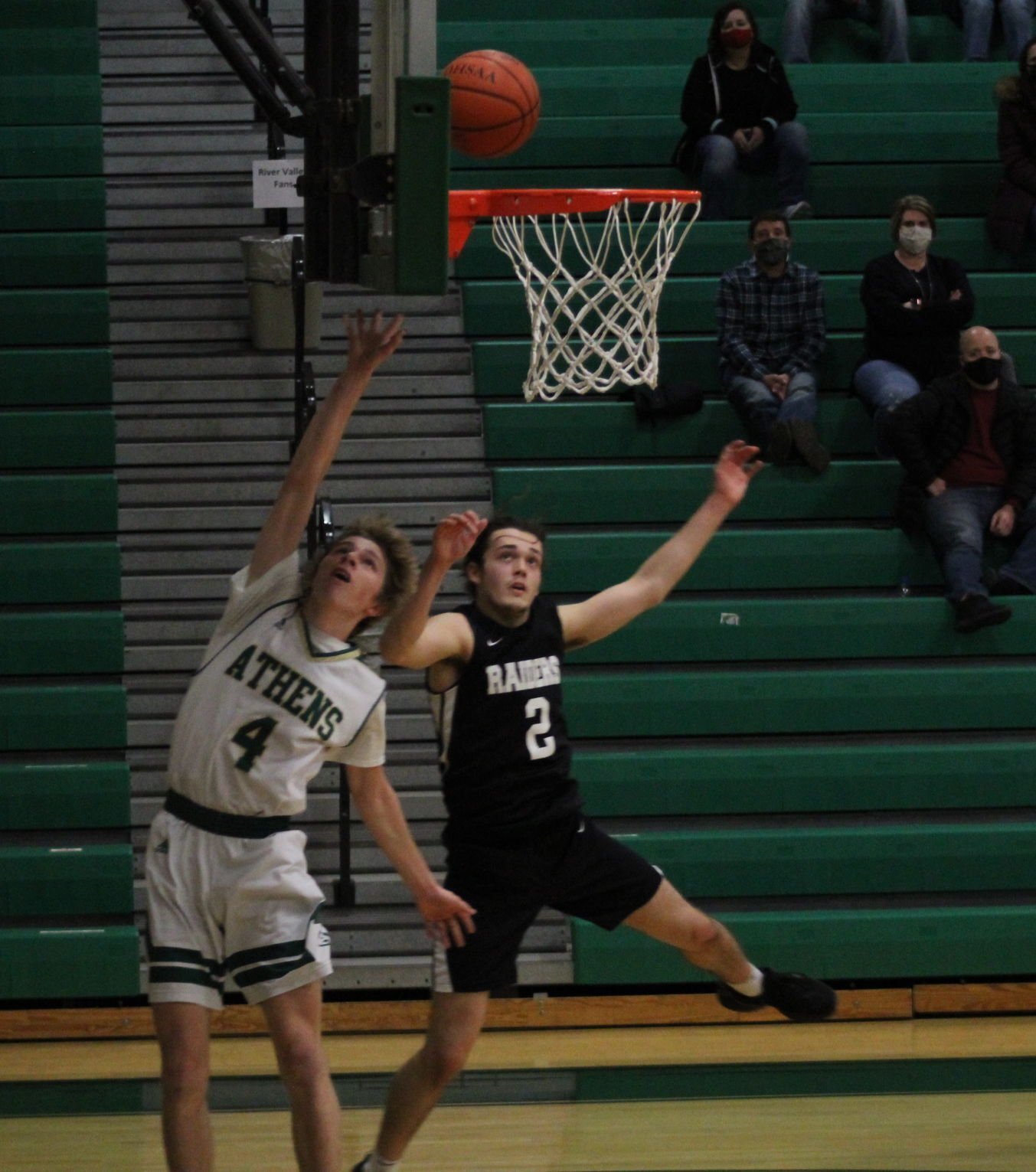 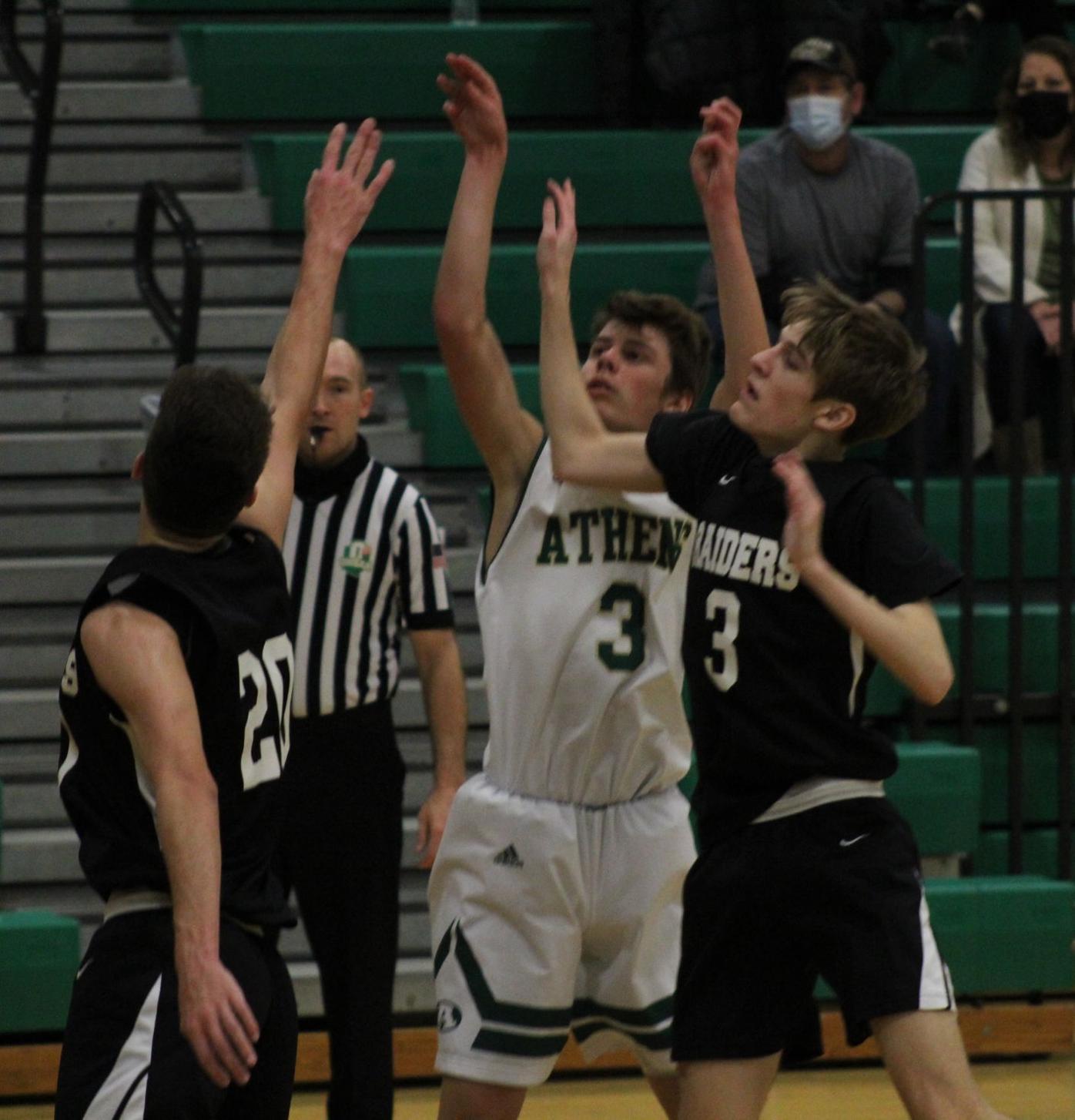 Athens coach Mickey Cozart said there was concern about the Bulldogs having a letdown after Tuesday’s dramatic win over Vinton County.

Instead of a letdown, the Bulldogs gave Cozart what he described as their best all-round performance of the season.

Will Matters netted a career-high 30 points, as Athens rolled past the River Valley Raiders, 75-36, on Friday inside McAfee Gymnasium.

Athens led 12-0 less than three minutes into the game and never looked back.

“We came out ready to play tonight,” Cozart said. “They were flying around. Well-oiled machine tonight. Honestly, it’s the best I think our team’s looked all season.”

Just about everything that Matters did against the Raiders was successful. He shot 12 of 16 from the field, making 6 of 8 from both 2-point range and 3-point land.

“I thought he was outstanding tonight,” Cozart said. “He’s hit 11 3’s the last two games. He’s playing at a high level. He’s supposed to be. He’s a senior. He’s our point guard. He’s our leader and he should be playing at that level.”

The Bulldogs wrestled away a win from Vinton County on Tuesday, ending the game on a 13-1 run and winning on Jake Sayers’ late 3-pointer.

It was such an emotional victory, Cozart was hoping his squad still had enough left in the tank.

“That’s what we preached on since that game was no letdown,” Cozart said. “You’ve got to build on that and I thought we did that tonight.”

The Raiders came in not having lost since Dec. 15, but only had seven available players and no JV squad.

The Raiders had four turnovers before attempting a shot from the field, and found themselves down 20-7 after consecutive Matters’ 3-pointers.

Matters’ third trey of the first quarter allowed Athens to lead 23-9. The Bulldogs eventually led 35-11 in the second quarter — a 21-4 run — after Matters had a steal and assist on Brayden Whiting’s runout.

“We rebounded well,” Cozart said. “Our transition was well. We knocked down some shots. We shared the basketball. I just thought we did a lot of good things tonight.”

“Defensively, we were locked in,” Cozart said.

Whiting had 15 points, seven steals, four rebounds and three assists for Athens. Sayers followed up his game-winning shot on Tuesday with 11 points and four steals on Friday.

Derrick Welsh had eight points and seven rebounds, and helped lead the way in the defensive effort against River Valley’s Jordan Lambert.

The 6-foot-5 senior is a career thousand-point scorer, and finished with 24 points on Friday. He was held to nine points in the first half though, as Athens built its insurmountable lead.

“Derrick’s a pretty good center of his own,” Cozart said. “We felt good about the matchup, probably better about it this year than last just from a defensive standpoint. Derrick can fly around a little bit, and he’s so long. It makes a big difference.”

Athens continued to build on its lead in the third quarter, going ahead 52-20 when Matters drained a right corner 3.

Matters closed the corner with a 3-pointer to beat the buzzer, pushing the advantage to 63-23.

The Bulldogs now turn their sights toward a big week coming up. They host Marietta on Tuesday in a game that will have implications in the Division II sectional tournament draw.

Athens then travels to Alexander on Friday in a matchup of two schools that shared the TVC-Ohio crown a year ago.

The Bulldogs then close the week next Saturday with a home game against the Trimble Tomcats.

“We’ve got three games next week, three big games,” Cozart said. “Every game is a big game for us next week, whether it’s league or non-league.

The contest with Trimble will mark the first meeting in a number of years between the two programs that regularly compete for TVC titles in the Ohio and Hocking Divisions.

“Trimble’s always tough,” Cozart said. “It’s exiting to go coach against Howie Caldwell. It’s the first time I’ve ever been able to do that. I’m looking forward to the matchup.”