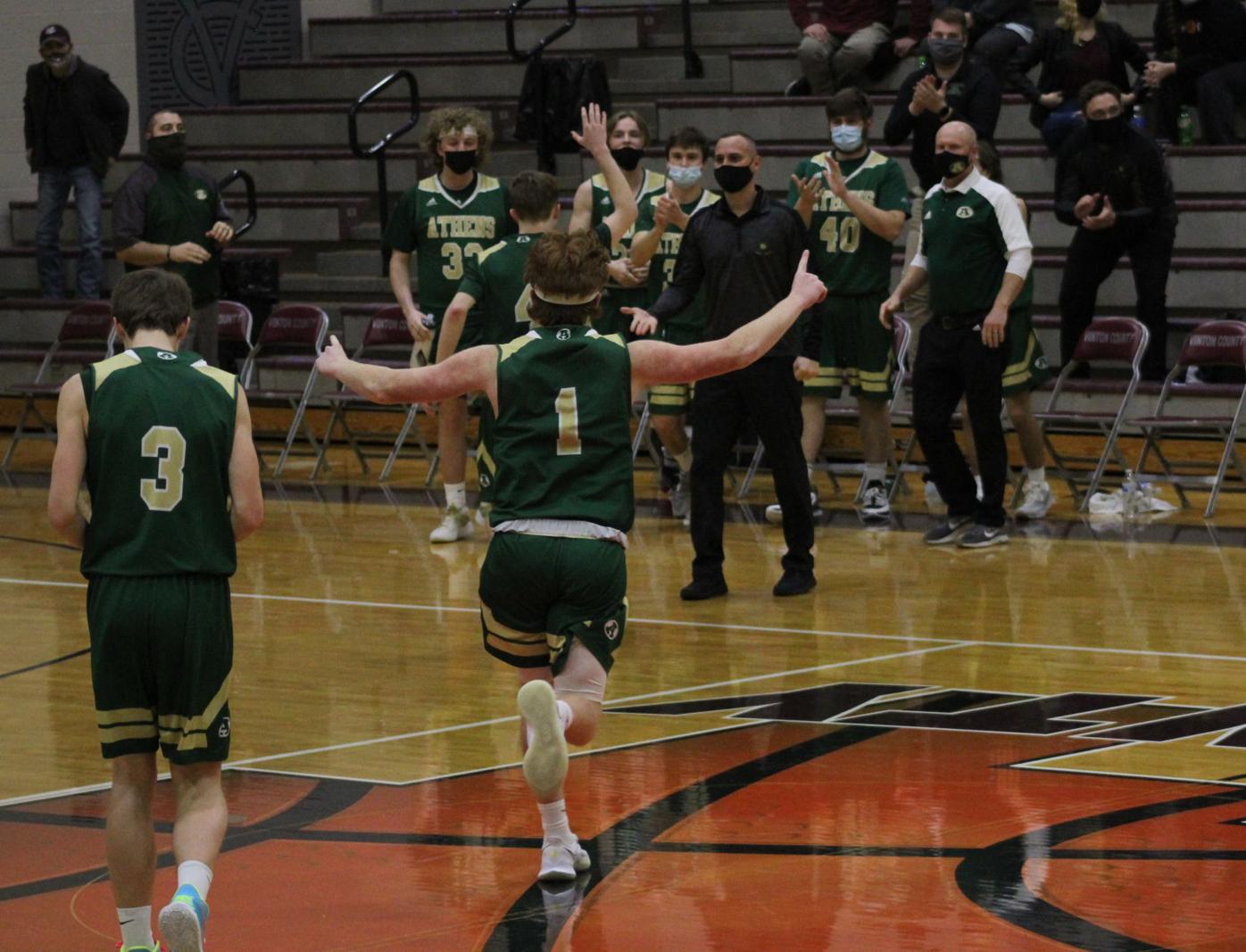 Athens’ Jake Sayers (1) and Will Matters (3) head back to the bench to celebrate after the Bulldogs’ 47-43 win at Vinton County on Monday. The Bulldogs have a two-game lead in the loss column over the Vikings. 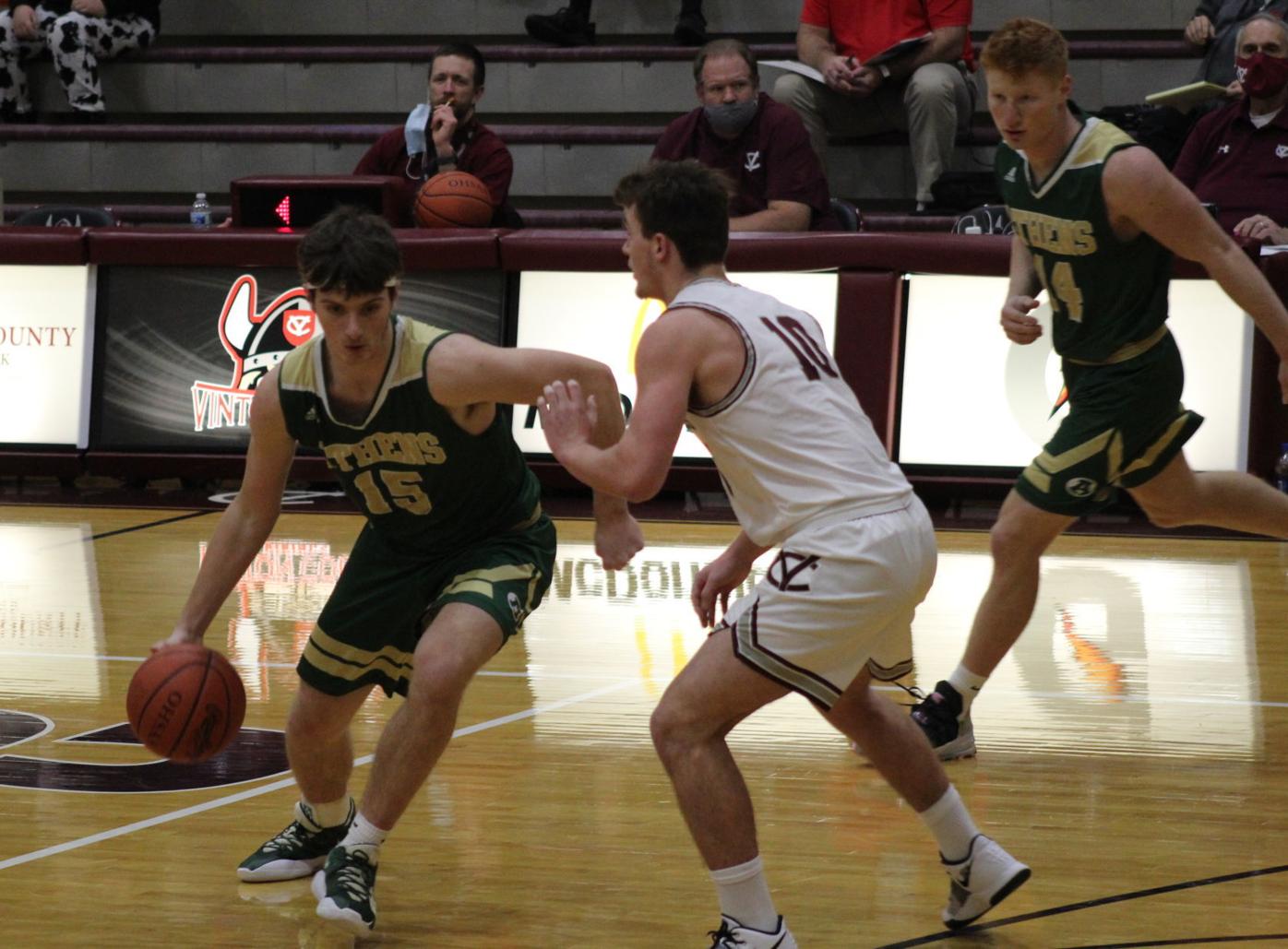 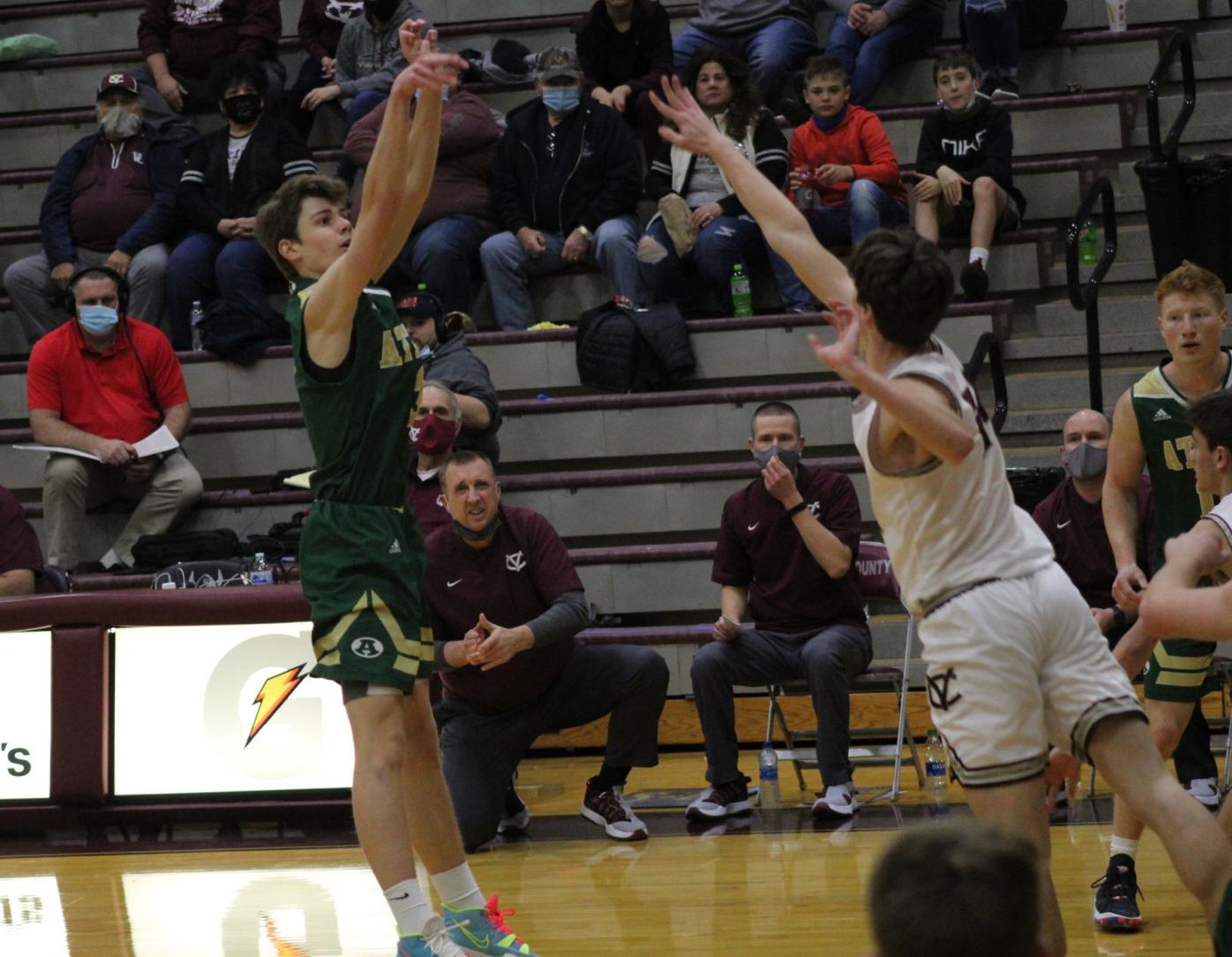 Athens senior Will Matters (left) puts up a shot during Monday’s game at Vinton County. Matters had 15 points in Athens’ 47-43 triumph.

Athens’ Jake Sayers (1) and Will Matters (3) head back to the bench to celebrate after the Bulldogs’ 47-43 win at Vinton County on Monday. The Bulldogs have a two-game lead in the loss column over the Vikings.

Athens senior Will Matters (left) puts up a shot during Monday’s game at Vinton County. Matters had 15 points in Athens’ 47-43 triumph.

Against the Vikings, the Bulldogs showed off another side of their squad that now seems destined to win a Tri-Valley Conference Ohio Division championship.

Athens had four players in double figures, and relied heavily on its defensive effort during a 47-43 victory against Vinton County.

The grin on Athens coach Mickey Cozart’s face was evident, even though he was still masked up. The Bulldogs have won the last two TVC-Ohio titles and are on their way to a third.

“Anytime you can walk into this place and get a win, it was a good night,” Cozart said. “(Vinton County coach) Matt Combs does a great job with these kids and they were prepared.”

Whiting still posted a double-double in the victory — 11 points and 12 rebounds — but it was the team effort that led the way on Monday.

Will Matters led the way with 15 points and three assists, while Trey Harris had 10 points and five rebounds.

“We’ve got guys that can play,” Cozart said. “Couple of them stepped up pretty big tonight when we needed them.”

Perhaps the biggest overall effort of the night was turned in by 6-foot-5-inch junior Derrick Welsh. He had 10 points, 15 rebounds and four blocked shots, anchoring Athens’ defensive effort.

“He was an absolute force tonight,” Cozart said. “Couldn’t ask him to play any better. He battled. He never quit. He altered so many shots outside of the four blocks that he had.”

The Vikings could never get in an offensive rhythm, shooting 28.8 percent (15 of 52) from the floor.

“We’re a team that depends a lot on the 3 and it seems like we missed a lot of open ones,” Vinton County coach Matt Combs said. “They did a good job of guarding us but at the same time I feel like, when we look back, we probably had seven or eight wide open shots from good shooters that we just didn’t make.

“We’ve been making those this year,” he added. “That’s what we kind of live and die by. Tonight, we died by it I guess.”

The course of the game changed in the third quarter. The Vikings went ahead 24-22 on Eli Radabaugh’s drive to the basket 65 seconds into the frame.

The Vikings wouldn’t score for the next 5 minutes 34 seconds as the Bulldogs took command.

Athens went ahead for good 25-24 on Welsh’s put-back basket with 5:03 remaining in the quarter. Matters’ left-corner 3-pointer lifted Athens to a 28-24 edge, and it was 30-24 after Harris scored on a drive to the basket.

Athens led 33-26 by the time quarter ended after another Matters 3. The Bulldogs held the Vikings to just four points in the frame.

“We did some different stuff than what we did the first time,” Cozart said. “We put Matters on (Braylon) Damron and I think he did a real nice job on him and we played a little 1-3-1 today and it was pretty effective.

“Luckily they missed some shots tonight. They shoot the ball very well. We probably caught them on an off night.”

Athens went ahead by 10 points, 40-30, with just under four minutes to play after Welsh’s layup before the Vikings made a final push.

Zayne Karr’s three-point play was followed by 3-pointers from Randall Matteson and Lance Montgomery, allowing the Vikings to cut the deficit to 44-39 with still 1:22 to play.

Matters pushed the lead back to seven points, 46-39, by making a running jumper along the base line.

The Vikings eventually trailed 46-42 when Welsh made yet another big play.

Harris missed the front end of a one-and-the-bonus for Athens with 33.7 seconds left, but Welsh flew in for the offensive rebound.

Athens was then able to get more than 12 seconds off the clock before the Vikings fouled Welsh out of a timeout with 21.3 seconds remaining.

“It just seemed like everything he did tonight was a big play,” Cozart said of Welsh.

The game wasn’t won just yet though. Welsh missed the front end of a one-and-one, and the Vikings brought the ball back the other way.

Montgomery would get fouled with 7.0 seconds remaining. He made the first to cut the deficit to 46-43, but missed the second.

Harris was fouled, with Athens now in the double bonus with just 4.4 ticks left.

Harris missed the first — Athens’ fourth straight free throw miss — but made the second, sending the Bulldogs to the victory.

The Vikings were trying to get in position to win a league title for the first time since 2018. They had won six TVC-Ohio games in a row since a 54-51 loss at Athens on Jan. 5, but weren’t able to get past the Bulldogs in another close game.

“If you’d had told me that Athens was going to come in here and score 47 points, I would have felt pretty good coming into this thing,” Combs said. “Thought our kids answered the bell (defensively).

“We had a couple close ones,” he added. “Give Athens credit. They’ve got a couple kids that have been through some battles and they’ve figured out ways to beat us. Tip your cap to those guys.”

The Vikings, a No. 11 seed, will travel to No. 6 Jackson on Thursday in a Division II sectional final.

Combs said it’s likely to be another defensive affair.

“They have some length, have some strength. Tough kids,” Combs said of Jackson. “They’re a team that plays a lot of games in the 40s. So we’re going to have to try and use this as a learning experience, watch this film and find out some different things we can try to do to try and attack Jackson a little bit. Hopefully get it done.”

The Bulldogs would like to end the week by winning a pair of titles.

The first chance comes Thursday, when No. 10 Athens travels to No. 7 Unioto for a Division II sectional final.

After that, the Bulldogs host Wellston on Saturday in a TVC-Ohio makeup game.

Athens would claim at least a share of the TVC-Ohio championship if it defeats Wellston.

Vinton County and Athens each have makeup games with Meigs to reschedule at some point, while the Bulldogs still have a trip to River Valley to reschedule.

“The next two days will be Unioto and Friday we’ll have a day to prep for Wellston,” Cozart said. “That’s just what it is. You don’t get a bunch of days for anybody anymore. We’re just happy to be playing.”