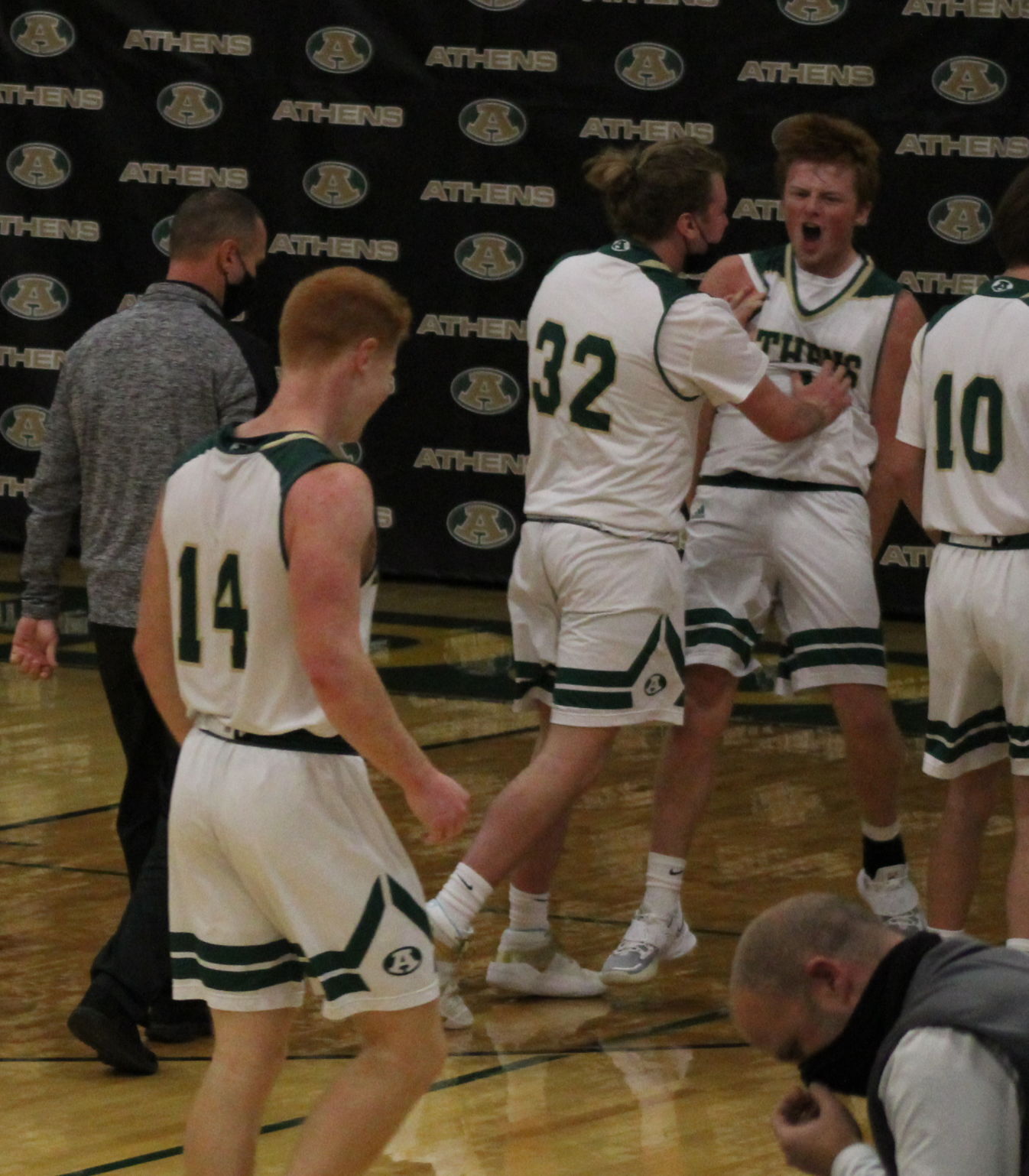 Athens’ Jake Sayers celebrates with Will Ginder (32) after Sayers hit a game-winning 3-pointer on Tuesday against Vinton County. 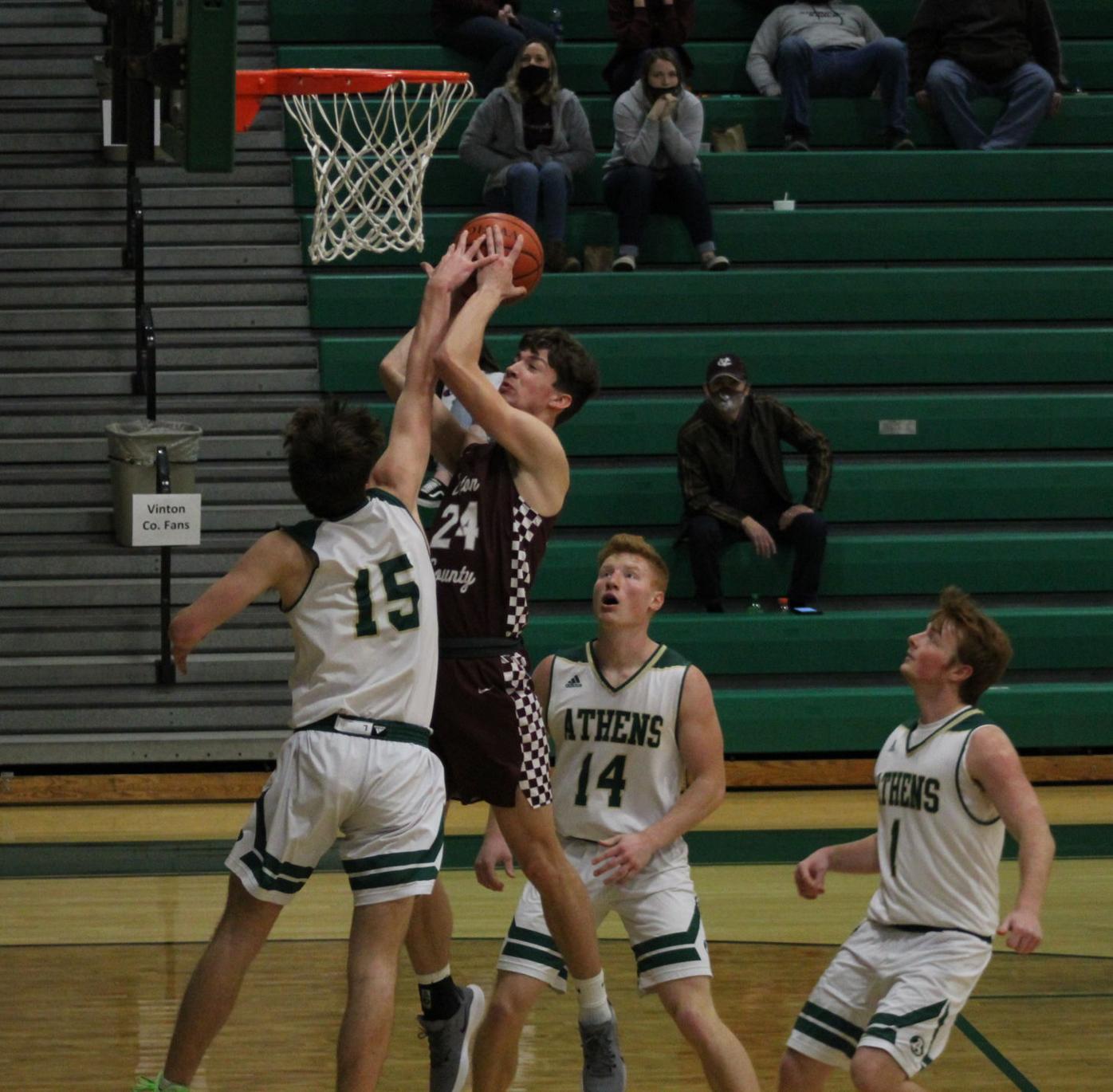 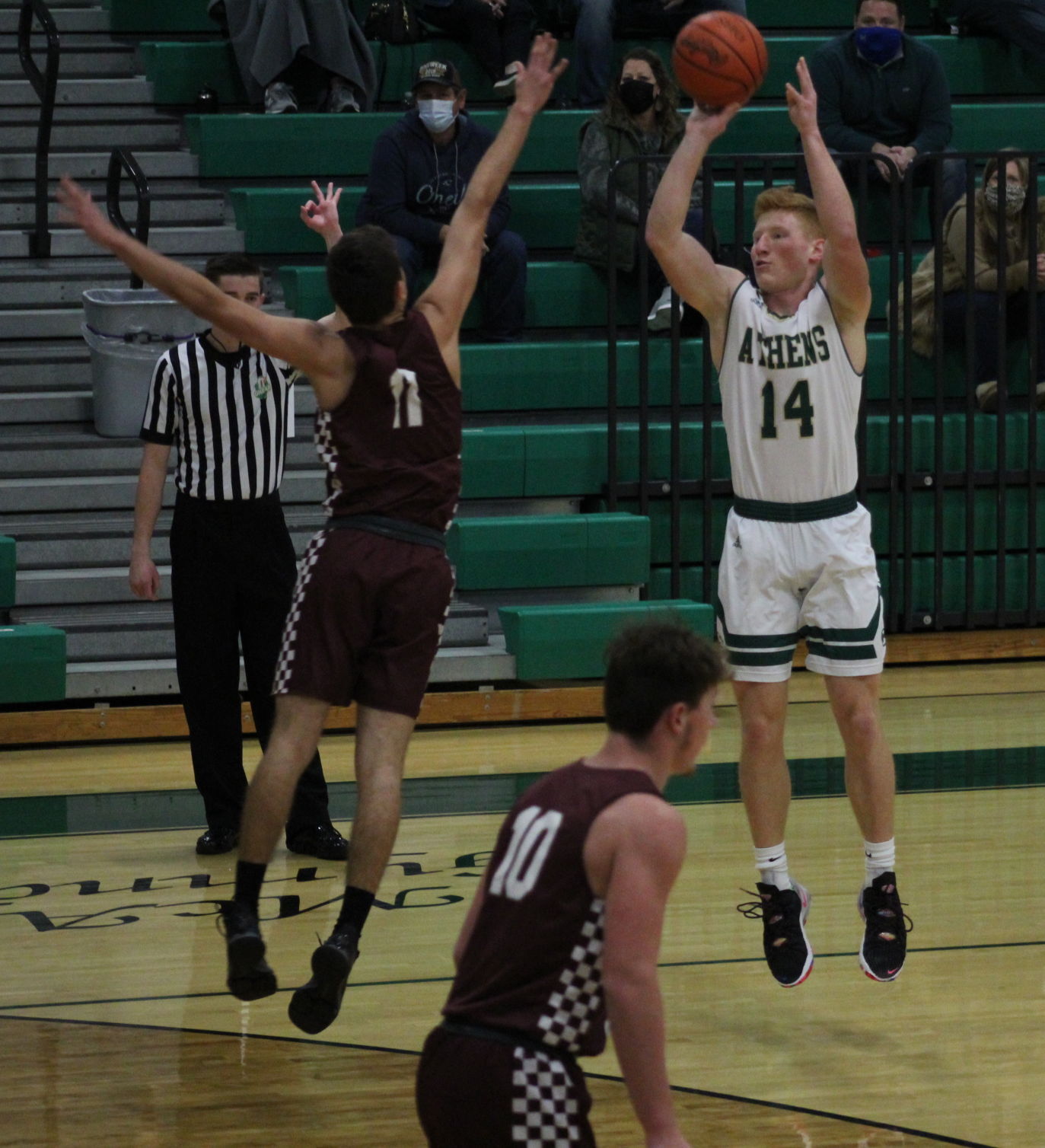 Athens’ Jake Sayers celebrates with Will Ginder (32) after Sayers hit a game-winning 3-pointer on Tuesday against Vinton County.

The play wasn’t drawn up for Jake Sayers.

However, the senior knew what to do when the basketball found his hands.

Sayers made the game-winning 3-pointer on Tuesday, lifting Athens to a dramatic victory over the Vinton County Vikings, 54-51, inside McAfee Gymnasium.

The Bulldogs take early control of the Tri-Valley Conference Ohio Division after ending the game on a 9-0 run.

“It’s control your own destiny kind of deal,” Athens coach Mickey Cozart said. “Take care of business and keep putting in the work and things will turn out the way they’re supposed to.”

Things turned out the way Athens wanted it to thanks to the final possession.

Athens came out a timeout with 21.4 seconds left, tied at 51-51 against Vinton County.

After getting the ball up the court, Will Matters delivered a pass to Trey Harris that was almost intercepted by Vinton County’s Braylon Damron.

Harris was able to control the basketball, finding Sayers open in the left corner.

Sayers didn’t hesitate as he put up the 3-point shot.

“I shot it and thought, ‘yeah that looks good,’” Sayers said. “Then I saw nothing but net. I was pretty juiced.”

Sayers hit the shot with around 10 seconds remaining, and the Vikings quickly brought the ball up the court.

As time was expiring, Vinton County’s Eli Radabaugh put up a shot from the top of the key. It hit back iron as the horn sounded, and Athens had escaped with the victory.

“Only thought was don’t let them score,” Sayers said of the closing seconds. “Don’t let them shoot a 3, and we did that and were able to get the win.”

Sayers finished with eight points, six rebounds, four steals and the biggest shot of the night. Athens (5-4 overall) moves to 3-0 in the TVC-Ohio while Vinton County (5-3 overall) drops to 3-1 in league play.

“What I drew up didn’t quite work, but the ball found its way to Jake and he knocked it down,” Cozart said.

“That’s a shot he’ll never forget the rest of his life,” Cozart added. “He’ll be telling his grandkids about that shot. He’ll say it was from the third row in the bleachers and he was falling out of bounds, but it was a great shot. I’m proud of him.”

For most of the second half, it appeared it would be Vinton County that would take the early lead in the TVC-Ohio. After trailing by nine points in the third quarter, the Vikings went on a 25-7 run to lead 50-41 after Lance Montgomery scored on a drive to the basket with 3:34 remaining.

The Vikings were cooking from long range, making 6 of 8 3-point attempts during one second-half stretch.

“They can flat out shoot it,” Cozart said. “Especially when you miss defensive assignments. We could not get to the ball. The things that we did so well in the first quarter and part of the way though the second, we just weren’t moving our feet like that.”

Damron was the Vikings’ top threat on Tuesday, as he made 6 of 11 from 3-point range to account for his team-high 18 points.

“Just keep your head,” Sayers said of Athens’ mindset during the Vikings second-half surge. “Don’t change anything. Just keep doing what you’re doing and stick to your game plan.”

Athens used full-court pressure as part of its comeback. It started with Brayden Whiting’s steal and assist on a Harris transition basket.

The Vikings still led 51-45 after Asa Davidson split a pair of free throws with 1:41 remaining.

The course of the game changed completely on Athens’ next possession.

Harris spotted Whiting open on the left wing. The senior lined up a 3, was fouled and hit the shot.

“It was monstrous, first off, but after coming off a game he had 36 and the rim seemed like it was 20 feet wide, he struggled to get himself going tonight,” Cozart said. “And he stayed with it, he stayed with it the whole time.”

Athens got the ball back when Derrick Welsh poked the basketball away on the other end, allowing Sayers to come up with a steal.

The Vikings finished the game with 14 turnovers, eight coming in the fourth quarter.

Whiting was fouled on a jumper on Athens’ next possession, and his two clutch free throws tied the game at 51 with 43.0 seconds left.

Athens got the ball back after Montgomery missed a shot on the other end, with Welsh grabbing the rebound and calling a timeout.

That set the stage for Sayers to hit the shot that shook the TVC-Ohio standings up in Athens’ favor.

“I have to give credit to all my teammates,” Sayers said. “Derrick had that clutch rebound and had the presence of mind to call that timeout. Before that, Brayden hit the free throws to tie up the game. Will brought it down and Trey got the ball, almost turned it over and he hit me and I hit the shot. I was happy to do it for my team.”

Matters added 17 points for Athens, making five 3-pointers of his own.

“He’s got a lot to do,” Cozart said of Matters. “He’s one of our best defensive players and we’re asking him to run the offense and score. He’s got a lot on his plate and I thought he had a real solid game.”

Athens is scheduled to host River Valley on Friday in another important TVC-Ohio game. The Raiders are 6-2 overall and 2-2 in league play after a 52-45 win over Wellston on Tuesday.

The Bulldogs are the two-time defending TVC-Ohio champions. Early on it appears the Vikings are a top threat for that title, but it’s Athens which strikes first in the league race thanks to a game-ending 13-1 run.

“Ultimately, that’s our goal. Win a TVC championship,” Sayers said. “We saw what we can do. We can play from a deficit and play with the best teams in the conference. We’re just going to keep doing it.”