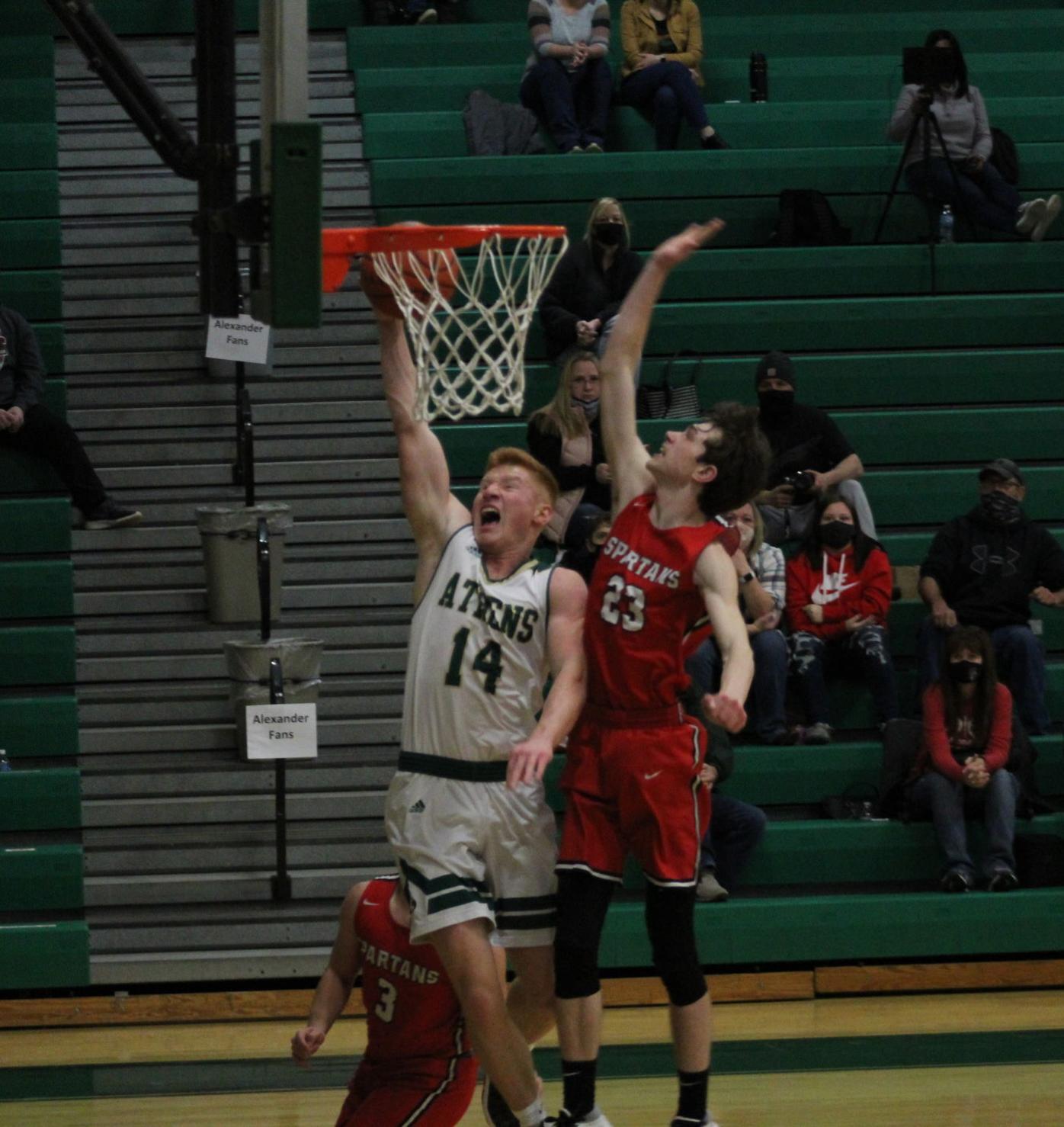 Athens’ Brayden Whiting (14) goes up for a shot on a fast break against Alexander’s Jeremiah Clark. Clark got a block on the play, but Whiting would go on to finish with 28 points in Athens’ 50-48 win. 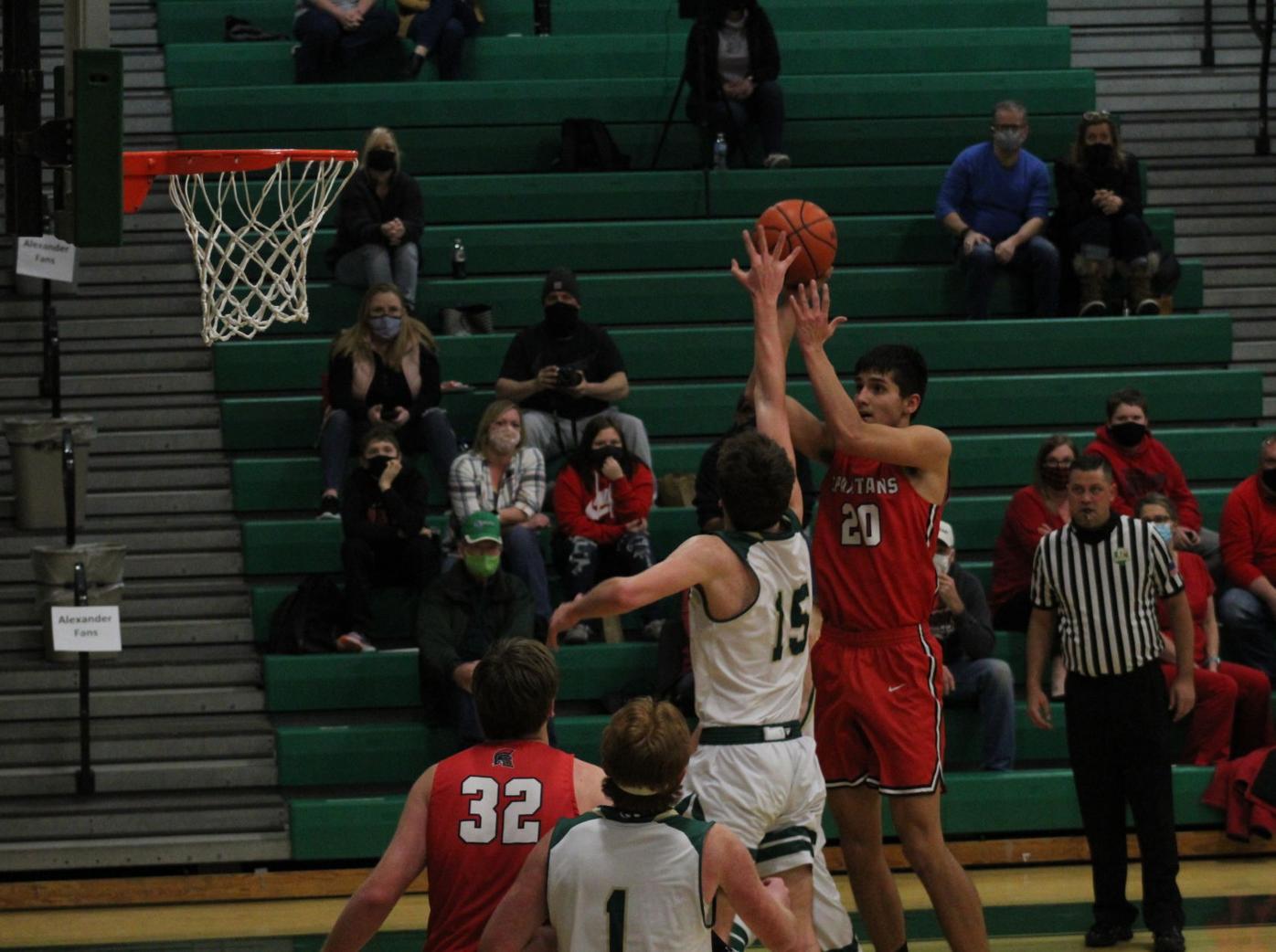 Athens’ Brayden Whiting (14) goes up for a shot on a fast break against Alexander’s Jeremiah Clark. Clark got a block on the play, but Whiting would go on to finish with 28 points in Athens’ 50-48 win.

The Bulldogs led by two points, but Alexander was inbounding the ball at mid-court with a chance to either tie or win the game.

“Our defensive strategy is put everybody we had on him,” Cozart said, with a laugh. “It ended up looking that way.”

The defense worked for Athens. D’Augustino didn’t get to take the final shot, and Athens was able to hold on to win a 50-48 thriller over Alexander on Friday inside McAfee Gymnasium.

Athens, playing its first game in 20 days, remains alone in first place in the Tri-Valley Conference Ohio Division with a 7-0 league record.

The Spartans (7-10, 5-6 TVC-Ohio) were a shot away from putting a blemish on Athens’ TVC-Ohio record.

Alexander came out of a timeout, trailing by two points with 4.0 seconds left and Jeremiah Clark inbounding the basketball at mid-court.

The Bulldogs (9-7 overall) had Trey Harris and Will Matters on D’Augustino, and when the play started, Brayden Whiting also flashed in front of Alexander’s sophomore standout.

“He’s a great player, so you’ve got to put a bunch of guys on him and hope he doesn’t touch the ball,” Cozart said. “That’s what you’re hoping for.”

It was a chess match between the two coaches. Alexander’s Jeff Skinner — coaching at Athens for the first time as an opponent since coaching the Bulldogs — anticipated D’Augustino getting the attention. He said the play was drawn up for senior Cam Houpt.

Houpt was playing one of his best games of the season, as he finished with 17 points (8 of 15 shooting) with 12 rebounds.

“We had a backup play and I thought we got what we wanted with the guy guarding Cam there,” Skinner said.

Clark was able to inbound the ball to Houpt along the left wing, and by this point Matters was in his way, with Derrick Welsh also defending.

Houpt passed across court to Jagger Cain, who already made a pair of 3-pointers earlier in the game.

Cain squared up along the right wing, with Whiting closing in on him.

Whiting appeared to get a piece of the ball, and the shot fell short of the rim at the buzzer.

“We knew it was going to be hard to get it to Kyler, so somebody else had to make a play and it just wasn’t in the cards for us,” Skinner said.

The Bulldogs were able to defend all over the court over those final four seconds, ending with Whiting’s pressure on the shooter.

“That’s one thing that I think we do really well, we close out well,” Cozart said. “It’s just something that we hound on every night in practice.”

It was fitting that Whiting made the final defensive play, as his overall game was the biggest reason the Bulldogs won in their return.

It was a different story the rest of the way, as he scored a game-high 28 points, including 21 in the second half.

“Whiting is a monster,” Cozart said. “He’s another guy in this league that can flat out score. You lose him and he can make you hurt for it.”

“He can score with size, and they can move him around on the floor and Brayden’s sharp enough, he can read and do what needs to be done,” Skinner said.

Cozart said it was moving Whiting to the high post against Alexander’s zone in the second half that helped turn the game around. Athens trailed 16-15 at halftime, but Whiting scored eight points in the third to help Athens establish an advantage.

“It really made them change what they were doing,” Cozart said. “We had a guy that could hit that foul line shot. He hit it and they had to adjust. Once they did that we moved him back out and got him in his comfort zone.”

The Bulldogs led 35-25 after Matters found Whiting for a transition layup in the third quarter.

The Spartans kept coming at the Bulldogs, answering with a 10-0 run to tie the game at 35-35 when Clark found Houpt for a score on an inbounds play with 6:19 to play in the fourth.

Alexander never took the lead back, however. Whiting broke the 35-35 tie with a drive to the basket, then scored again when Matters zipped a pass to him in the post for a lay-in.

Another Whiting drive allowed Athens to lead 45-40 with just 2:10 to play.

Alexander made a final push. D’Augustino made two free throws, then Clark assisted on another Houpt basket to cut Athens’ advantage to 45-44.

Harris scored on a drive on the other end for Athens, but a putback for Houpt trimmed the ‘Dogs’ advantage to 47-46.

When Whiting made two free throws with 24.9 seconds remaining, Houpt scored on another putback to allow Alexander to trail just 49-48.

“Cameron did a great job offensive rebounding in that stretch,” Skinner said.

Whiting went to the foul line with 7.6 seconds remaining and made the first for the 50-48 lead. He missed the second though, but Athens’ overall team defense would take the win home from there.

It was the Bulldogs’ first game in Jan. 23. They came off of quarantine last Sunday, but had their game at River Valley snowed out on Tuesday.

The quarantine, combined with last week’s inclement weather, meant the Bulldogs had only logged three hours on the practice court in the last three weeks.

The Spartans were taking advantage early on, scoring the game’s first eight points and eventually leading 11-2 before Jake Sayers ended the opening quarter with a 3-pointer.

“I told our guys we were pretty bad in the first quarter,” Cozart said. “From then on, I thought we played a pretty solid game even with the three hours of practice. We had to do a lot of game scheming by text. It’s just the new normal for a while.”

Skinner felt like the Spartans missed an opportunity for an even bigger advantage early in the game. Alexander was held to five points in the second quarter, and its final lead of the night came at 25-24 in the third quarter.

“I felt like our energy in the first half was not near good enough to win a big game and it came bak to bite us,” Skinner said. “Because they’ve been off, they haven’t practiced, and we got a little bit of a lead and I felt like we were in a spot where we could keep advancing the lead and pulling a little further away and a little further away. But to their credit, they battled back.”

D’Augustino led Alexander with 21 points, adding six rebounds and two assists. He missed the first meeting with Athens, a 47-32 Bulldog win in Albany, and his presence made for a different game in the rematch.

“That’s a good basketball team,” Cozart said. “They’re big and they’re long and they have a kid that can flat out score. It doesn’t matter, you can scheme all you want and you can throw the kitchen sink at him, he’s still going to get 20. That’s an average night for him.

“I thought we played him well tonight. We threw some things at him and tried to shake it up a little bit.”

Alexander’s final league is scheduled for Saturday at 12 p.m. at home against River Valley, a team it will see again in the tournament.

While the Spartans are almost through league play, the Bulldogs still have five TVC-Ohio games left in order to try and win a third straight title.

A huge test will come at Vinton County on Monday. The Vikings are 8-1 in league play, the only loss coming at Athens.

If the schedule holds, Athens will also host Wellston on Tuesday and travel to Nelsonville-York on Friday.

Cozart said the key is trying to get back into as much of a routine as possible.