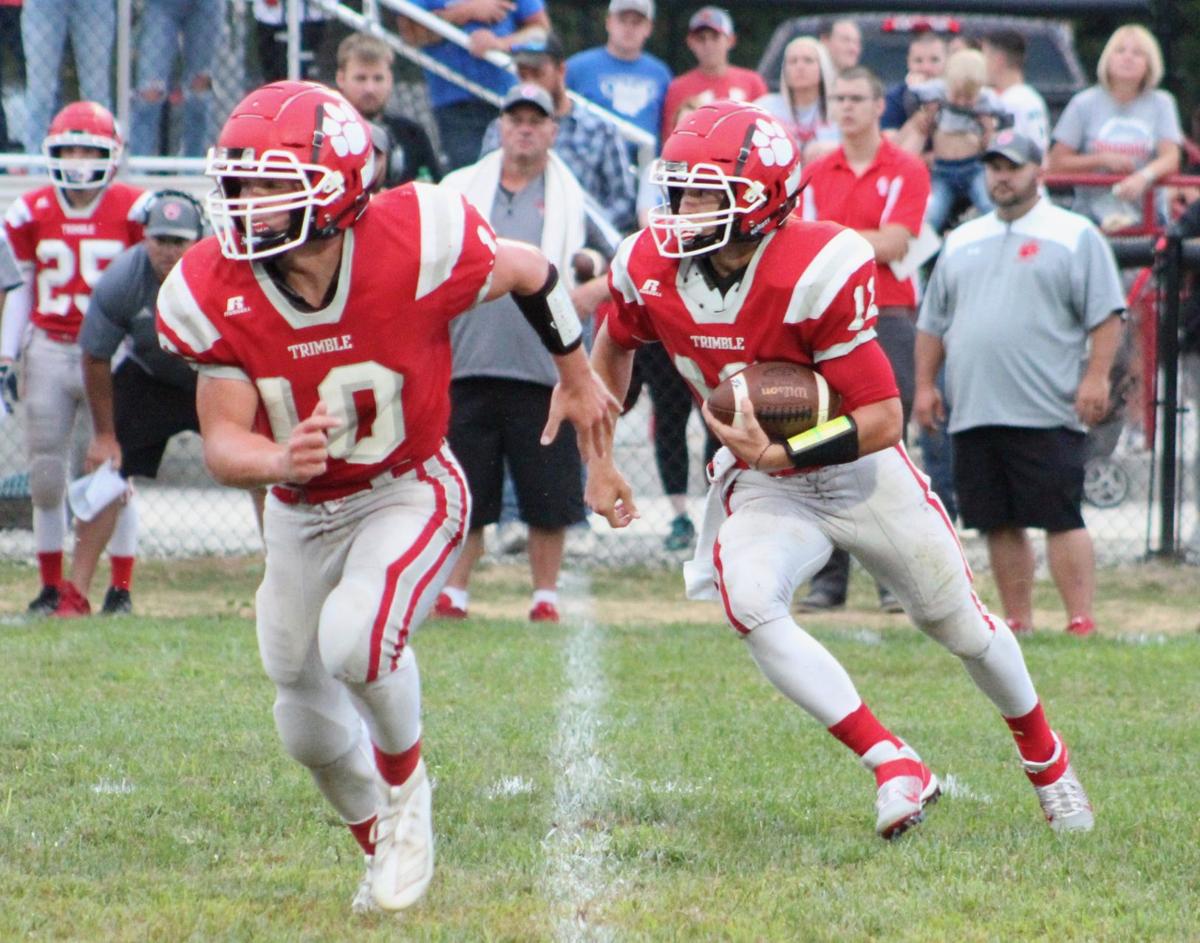 Trimble seniors Conner Wright (left) and Cameron Kittle (right) both gained more than 100 yards rushing in the Tomcats’ 35-0 win over Nelsonville-York in the 2019 season opener. 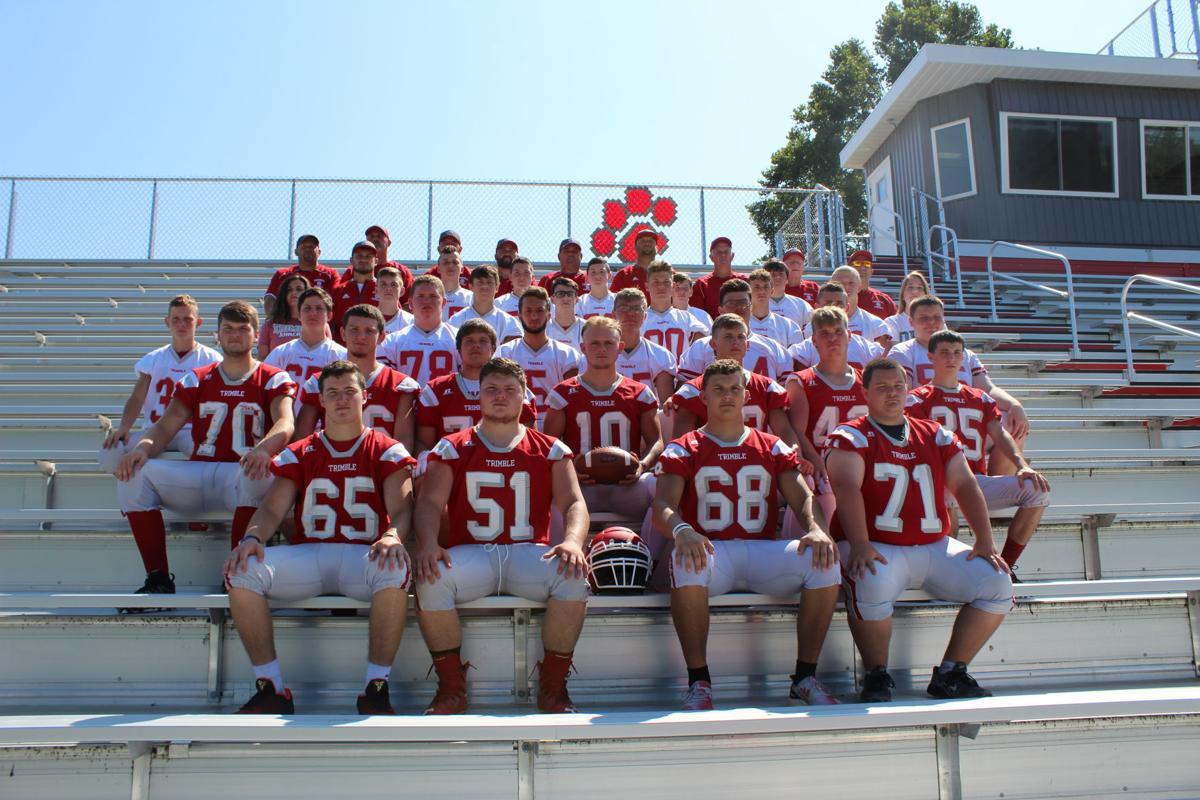 Trimble seniors Conner Wright (left) and Cameron Kittle (right) both gained more than 100 yards rushing in the Tomcats’ 35-0 win over Nelsonville-York in the 2019 season opener.

GLOUSTER — Phil Faires is the first to admit that his team’s locker room isn’t always a sunny, happy, place to be.

But when the lights are on, the Tomcats know how to blend into perfect harmony.

“These guys are around each other all the time. They’re a close group,” Faires said during preseason camp. “They bicker a lot. It’s like an old married couple some days.

“But then we play and we’re all on the same page.”

That much was evident in the Tomcats’ season opener, a 35-0 domination of rival Nelsonville-York on Saturday night that served notice that Trimble’s stalwart defense doesn’t appear to be taking any steps backward in 2019.

It was another clinical performance from Trimble against the Buckeyes. Nelsonville-York finished with just 104 total yards, and nearly half of that came in the game’s final four minutes. The Buckeyes had just four first downs, and never came close to smelling the end zone.

N-Y’s Keegan Wilburn, perhaps the most electrifying player in the Tri-Valley Conference, was smothered throughout. The senior speedster was held to negative-9 total yards on a combined seven touches.

In 2018, on their way to the Division VII state title game, the Tomcats posted a school-record nine shutouts. Trimble allowed just 40 points during the course of the 10-game regular season.

There’s no way the ‘Cats could approach or duplicate those numbers again in 2019, is there?

Well, Trimble is already seven points ahead of last year’s pace. And never tell the Tomcats what they can’t do.

“Our class has always been told what we can’t do,” said Trimble senior quarterback/safety Cameron Kittle. “We strive every week to prove what we can do.

“We love to prove people wrong.”

Trimble returned eight defensive starters from last season, but had to replace three to four rock-solid contributors from last year’s defense. Defensive end Alex Coffman was one of the best two-way players Faires has ever had on or near the line of scrimmage. Sam Ives became a terrific second linebacker paired with the returning Sawyer Koons. Max Hooper and Noah Rossiter were key members of the secondary.

But after one game, the Tomcats are getting along just fine with new contributors in those spots in sophomore Tabor Lackey, senior RB (and now also LB) Conner Wright, and sophomores Bryce Downs and Blake Guffey.

The compilation of parts and working together as a unit has made the Trimble defense a fearsome force in the TVC, Faires said. Yes, there’s talent, but it’s playing fast and playing together that nudge the Tomcats into the rarified air they’ve occupied of late.

It’s why a player like Shawn Turley, a senior defensive tackle, can not get credit for a ton of tackles but still emerges as a potential week 1 Player of the Week.

“They understand it’s not an individual out there,” Faires explained. “We’re not going to win if they think they have to make the big plays, each and every one of them.

“They know their unit,” the coach continued. “Like Turley, at tackle, has his job he has to do. He might not have a tackle the whole game, but if he does his job we’re going to win.”

That commitment to scheme, to each other, and to the task at hand is something Faires has grown accustomed to seeing. With the defense operating at a sharp level in the opener, it’s a bad sign for the rest of the Hocking Division in its quest to unseat the Tomcats in 2019.

“We love defense. We practice it every day,” Kittle said. “We know what we can do. Those shutouts…we love that.”

On the road in the TVC

Trimble begins defense of its TVC-Hocking title on Friday night at Belpre (0-1) in what will be the league opener for both teams.

The Golden Eagles lost their opener, another rivalry bout, in a 34-12 decision against Fort Frye. In a unique scheduling twist, Nelsonville-York plays Fort Frye in week 2. It should give the Tomcats an idea of how they might stack up against the Cadets — a favorite in Division VI, Region 21 this season.

As for the Golden Eagles, Trimble has enjoyed a perfect run against this league opponent. The Tomcats are 11-0 all-time against Belpre in TVC-Hocking play.

And the bulk of the games have been blowouts with an average score of 48-6. Trimble won the last meeting at Belpre, 44-7, in 2017. Last year, the ‘Cats shut out the Eagles 35-0 in a game played at Rutter Field in The Plains because of stadium renovations in Glouster.

— Conner Wright had 188 yards on 20 carries and three touchdowns in the opener against N-Y. In his last 16 games at Trimble, Wright has posted 14 100-yard rushing games. With Wright now playing full reps at linebacker, it’ll be interesting to see if that trend continues.