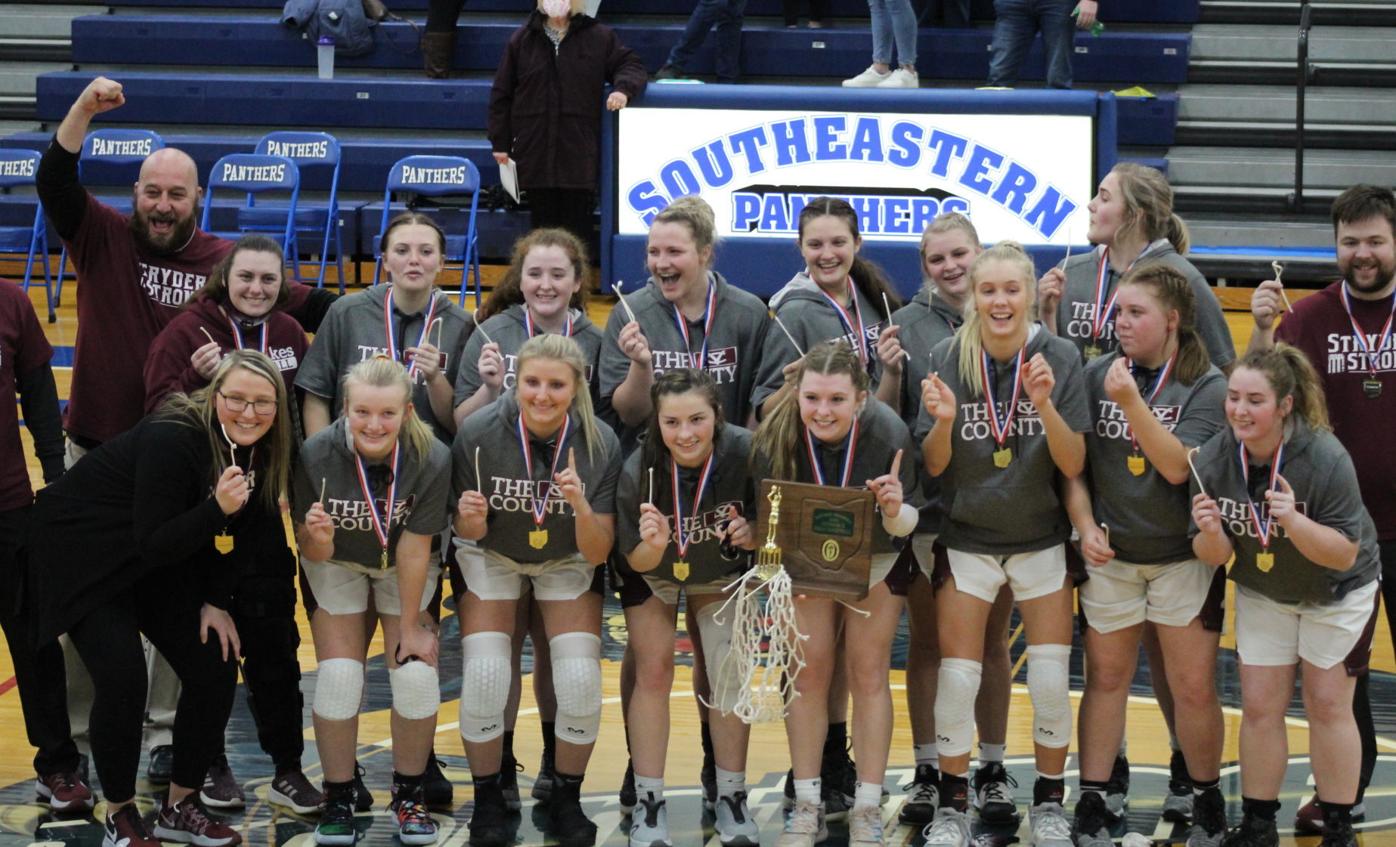 The Vinton County Vikings celebrate with their Division II Southeast District championship trophy after beating Circleville, 58-29, on Friday. The Vikings advance to the regional tournament for the first time in program history. 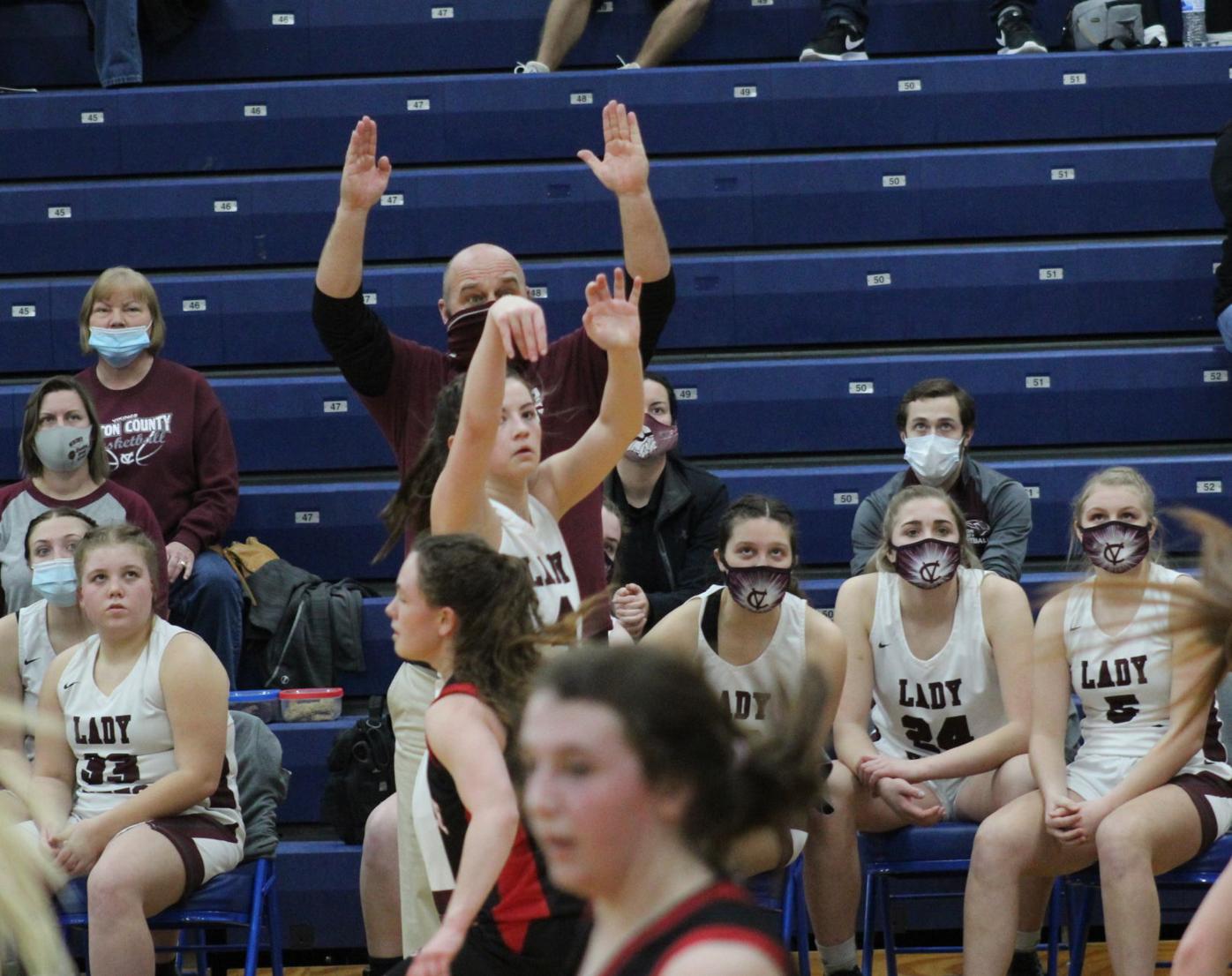 Vinton County senior Myriah Davis puts up a shot, while her head coach Rod Bentley prepares to celebrate in the background. Davis made the shot, one of four 3-pointers on the night as the Vikings won a Division II Southeast District title, 58-29, over Circleville. 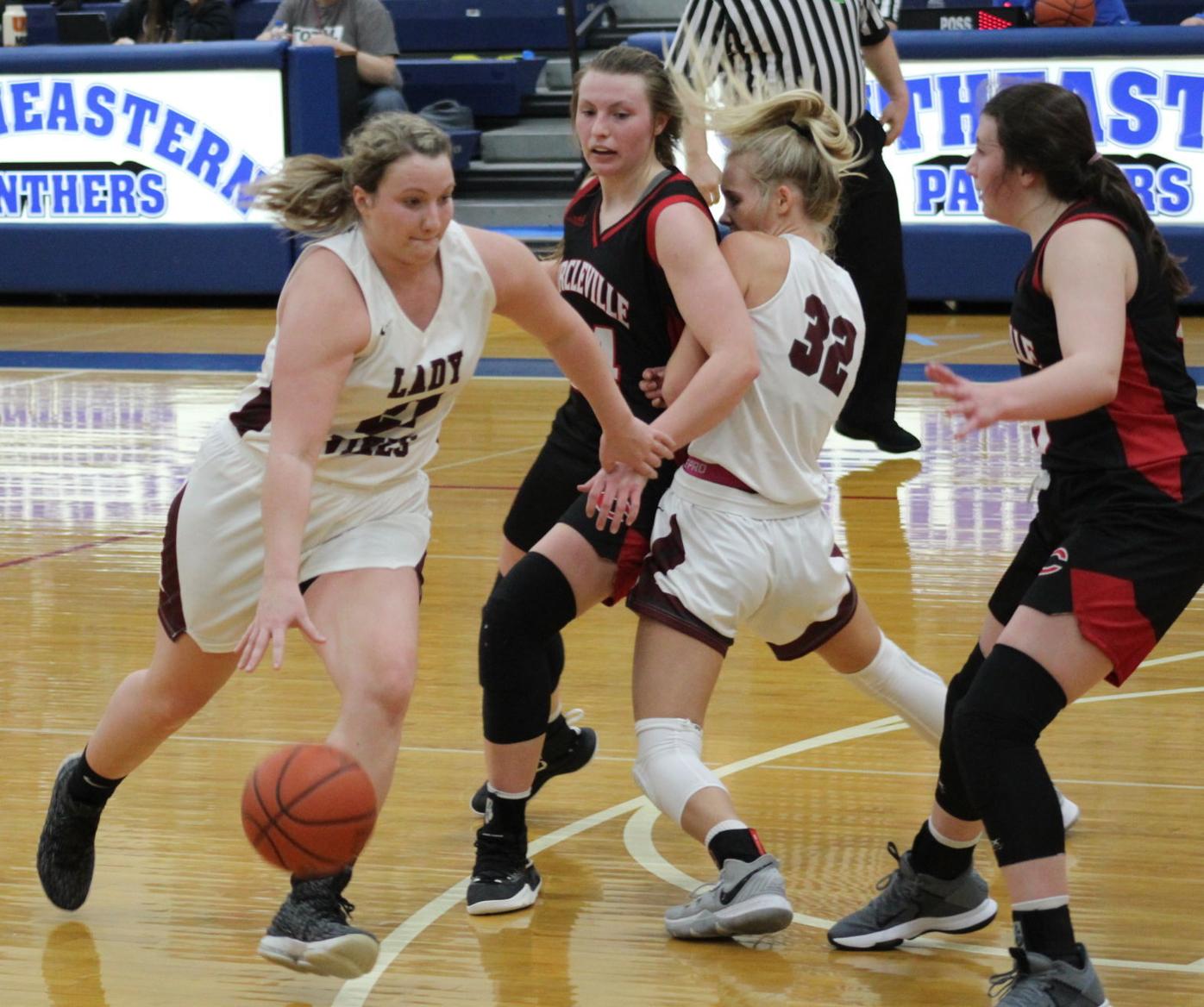 The Vinton County Vikings celebrate with their Division II Southeast District championship trophy after beating Circleville, 58-29, on Friday. The Vikings advance to the regional tournament for the first time in program history.

Vinton County senior Myriah Davis puts up a shot, while her head coach Rod Bentley prepares to celebrate in the background. Davis made the shot, one of four 3-pointers on the night as the Vikings won a Division II Southeast District title, 58-29, over Circleville.

CHILLICOTHE — Vinton County coach Rod Bentley couldn’t keep his emotions in check any longer as the final minutes of Friday’s district championship game were ticking away.

The Vikings were up big against Circleville, the elusive district championship finally within reach.

“Tears was just rolling down their eyes,” he said. “When we called that timeout and we knew the game was over, I looked around the huddle and the tears started flowing. It was just a great moment.”

The Vikings are district champions for the first time in program history, and they did so in style.

No. 2 Vinton County put on a defensive clinic against No. 3 Circleville, claiming a 58-29 victory in a Division II district final at Southeastern High School.

The Vikings lost in the district finals the previous two seasons, last year coming to Circleville, but they left no doubt about the outcome this time around.

“It’s the first girls district championship in school history, so it’s awesome,” Vinton County junior Cameron Zinn said. “We’ve been at this stage three years in a row and I think that’s why we came out ready to play, because we knew what happened the last two years and we know that feeling. This feels a lot better and I’m so happy that we won.”

Friday’s district championship game was tied at 14-14 after one quarter, but it was all Vikings after that.

Vinton County won the second quarter 18-1 and never relinquished control of the game the rest of the way.

“We realized our pressure was the best thing,” Bentley said. “When we started pressuring them in the three-quarter court, full-court, guards did an amazing job up front and it just started making turnovers.”

The Tigers weren’t able to handle the Vikings’ pressure, finishing with 19 turnovers in the game, seven coming in the decisive second quarter.

Myriah Davis and Zinn each had four steals, as the Tigers (17-3) had a difficult time getting their star post player Kenzie McConnell established inside.

“We got yelled at a little bit earlier for not pressuring up as much as we normally do, but we started picking it up,” Davis said. “That’s what made them turn it over a bunch, me and Tegan (Bartoe) up top and Cam. We wanted this win big.”

MConnell, the program’s all-time leading scorer and Ashland University commit, finished with 12 points. However, 10 of those points came in the opening quarter.

McConnell dealt with foul trouble — she picked up her second early in the second quarter, then her fourth foul late in the third — and wasn’t able to keep up her early scoring pace.

McConnell made all seven of her free throws, going just 2 of 4 from the field as her looks at the basket were limited.

“We went into that 2-3 and I was staying on her the whole time,” Zinn said. “We were fronting her. She’s a great player. She’s going to do great in college.”

With McConnell’s impact limited, the Vikings’ defense feasted on the Tigers’ offense the rest of the way.

“We just really focused in on practice,” Zinn said. “We knew exactly what they were going to do. We mixed up the defense a lot.”

“I thought they did a great job of playing defense, team defense,” Bentley said. “I think that’s our strong point. As pretty as we are on offense, I think we’re even better on the defensive end.”

Zinn’s steal and layup gave the Vikings (23-1) a 16-14 lead early in the second quarter, and it proved to be an advantage they never lost.

Vinton County went ahead 25-15 with 2:54 left in the second quarter on Davis’ 3-pointer, and the lead never dipped to single digits the rest of the way.

The halftime lead stood at 32-15 after Morgan Bentley’s 3-pointer, as everything was clicking for the Vikings.

The lead only grew in the third quarter thanks to Davis’ hot hand.

Davis’ first 3-pointer lifted the Vikings to a 41-22 lead. By the time her scoring onslaught was over, Vinton County was running away from the Tigers, leading 49-22 with 2:04 left in the third.

“I knew I was’t hitting them in the first half, so I was like, ‘I’m going to continue to keep shooting,’ and my teammates found me,” Davis said. “It kept going in, so I just kept shooting. They did a good job of finding me.”

The night was all about redemption for the Vikings, but it was particularly sweet for Davis. The senior was injured and unable to play in each of the last two seasons during the tournament run.

The Vikings got over the hump with Davis on the court, as she scored 18 points to go with nine rebounds and her four steals.

“Myriah Davis, again, if she had a healthy knee, I think we would have been the champions the last two years,” Rod Bentley said. “She’s that type of player.”

The Vikings led 51-26 going to the fourth quarter, the district title a formality by that point.

The Tigers were held to three points in the final quarter, as Vinton County nearly ran the final three minutes off the clock without Circleville even touching the basketball.

“Her motor’s what makes her the player that she is in both volleyball and basketball,” Rod Bentley said. “It’s the energy. It’s the effort.”

Bartoe added 12 points, four rebounds and four assists. She opened the game with a pair of 3-pointers to get the Vikings going. Morgan Bentley added eight points, six rebounds and three assists.

The Vikings received the district championship trophy afterwards, then cut down the nets. They will play in the Division II regional semifinals at Zanesville High School on Tuesday at 8 p.m. against Tri-Valley.

Tri-Valley defeated Dover 41-29 for a district title on Saturday.

“We’ve already starting preparing,” Rod Bentley said. “We’re on it tonight. Ready to get after it. We’re going to give the girls (Saturday) off, then we’re excited about getting in there and playing.”

Zinn said they aren’t satisfied yet. They want even more after winning three tournament games by a combined 103 points.

“We all wanted this more than anything, but we’re not doing yet,” she said. “We’ve already started scouting Tri-Valley, so we’re ready. We want to make it clear to Dayton.”