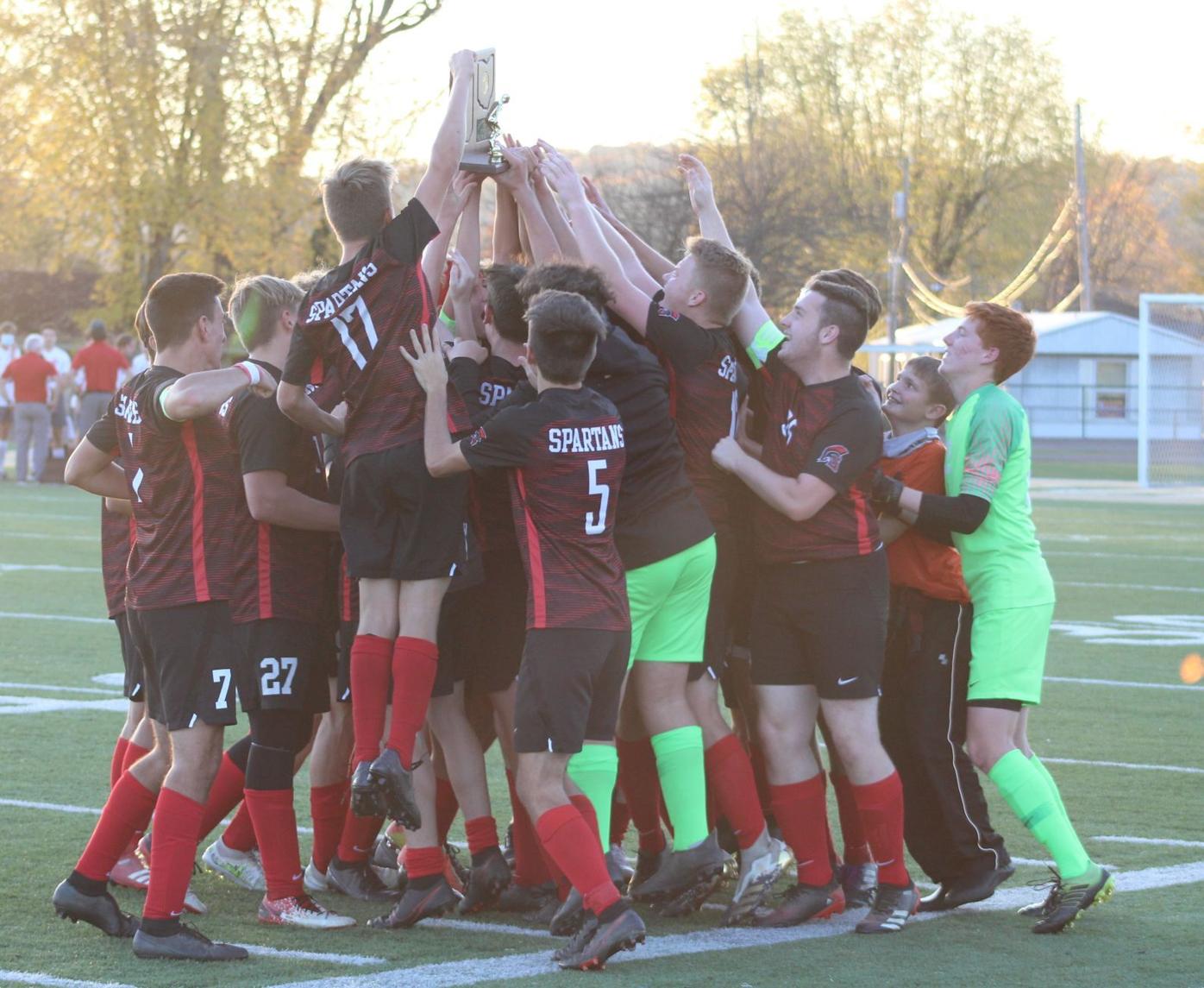 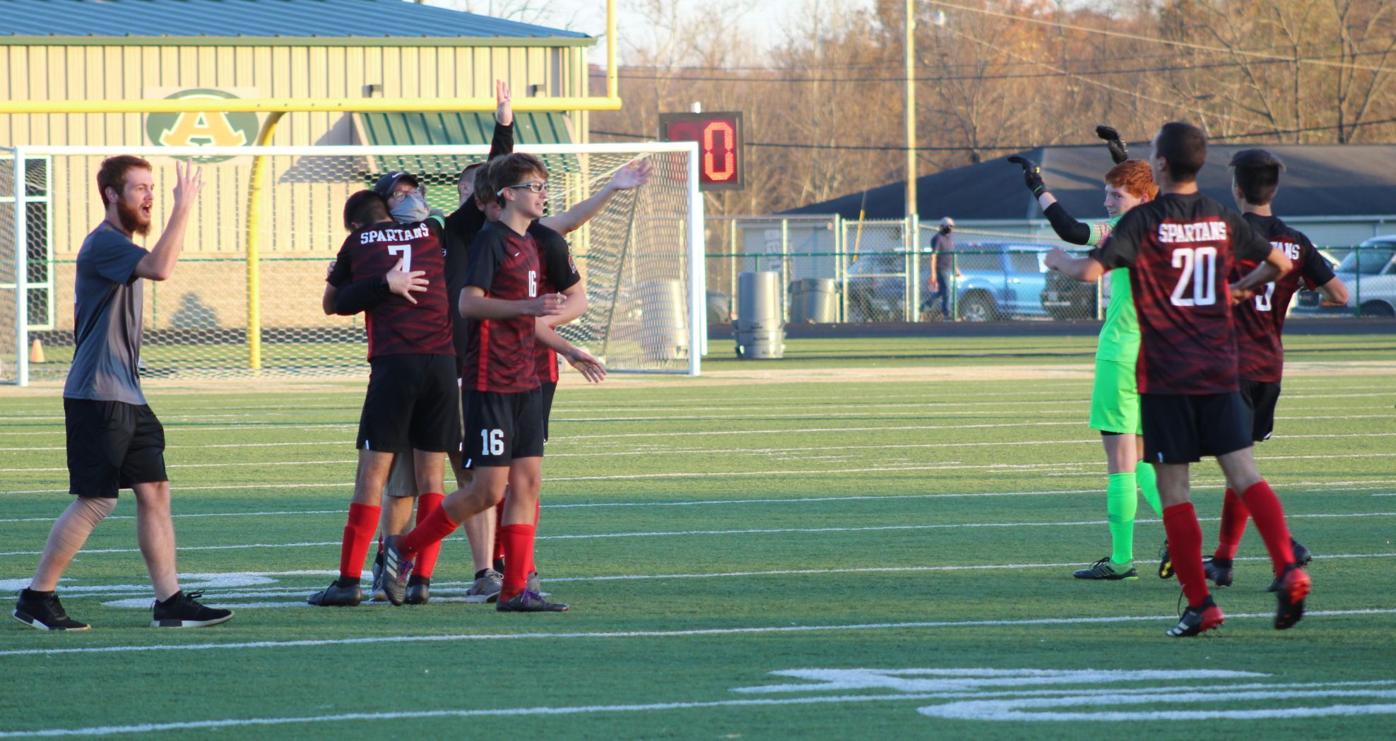 Alexander’s Austin Shields (7) celebrates with head coach Kirk Crow after the Spartans’ 3-2 overtime win over Dover. The Spartans advance to the Final Four for the first time in program history. 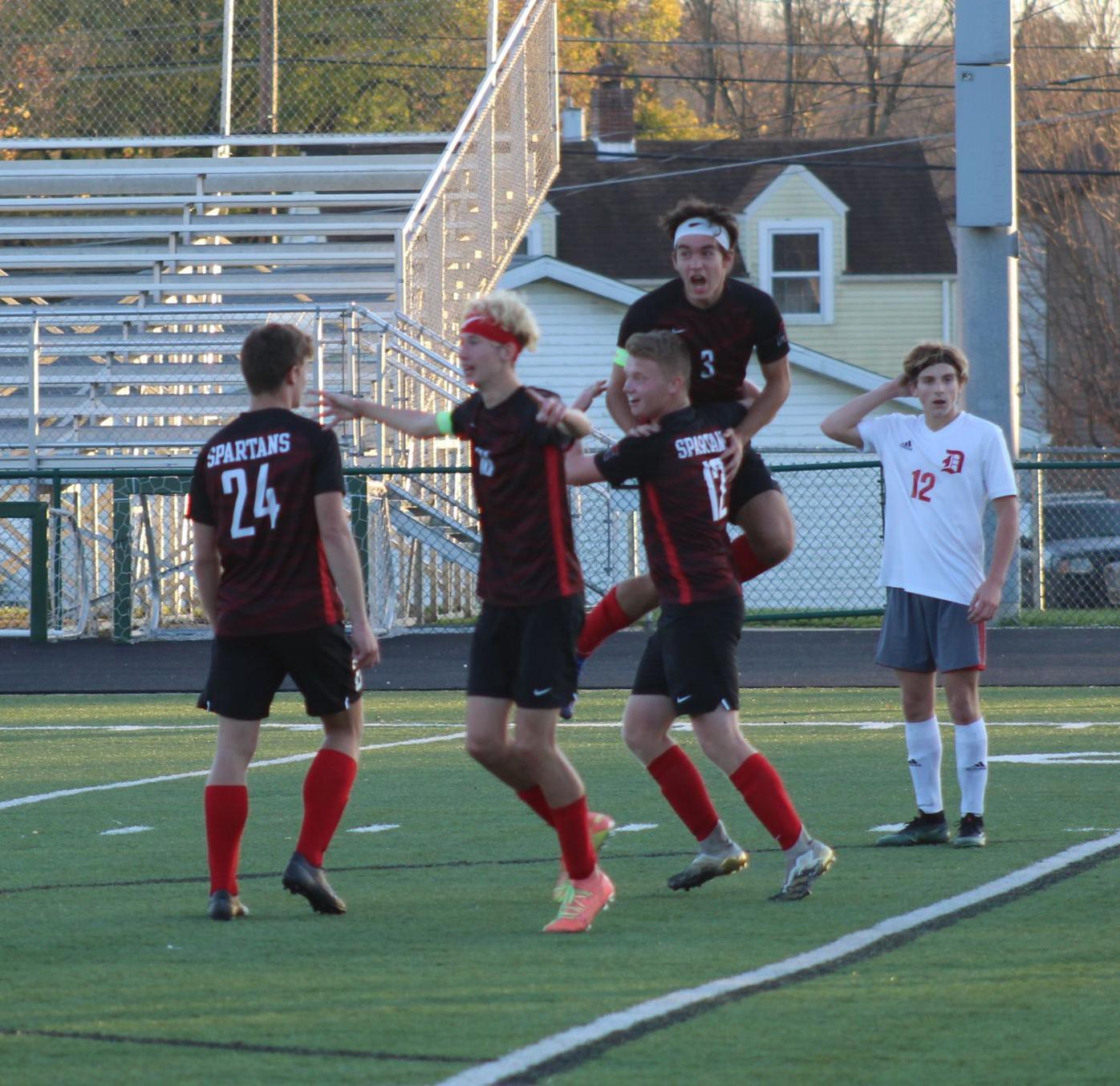 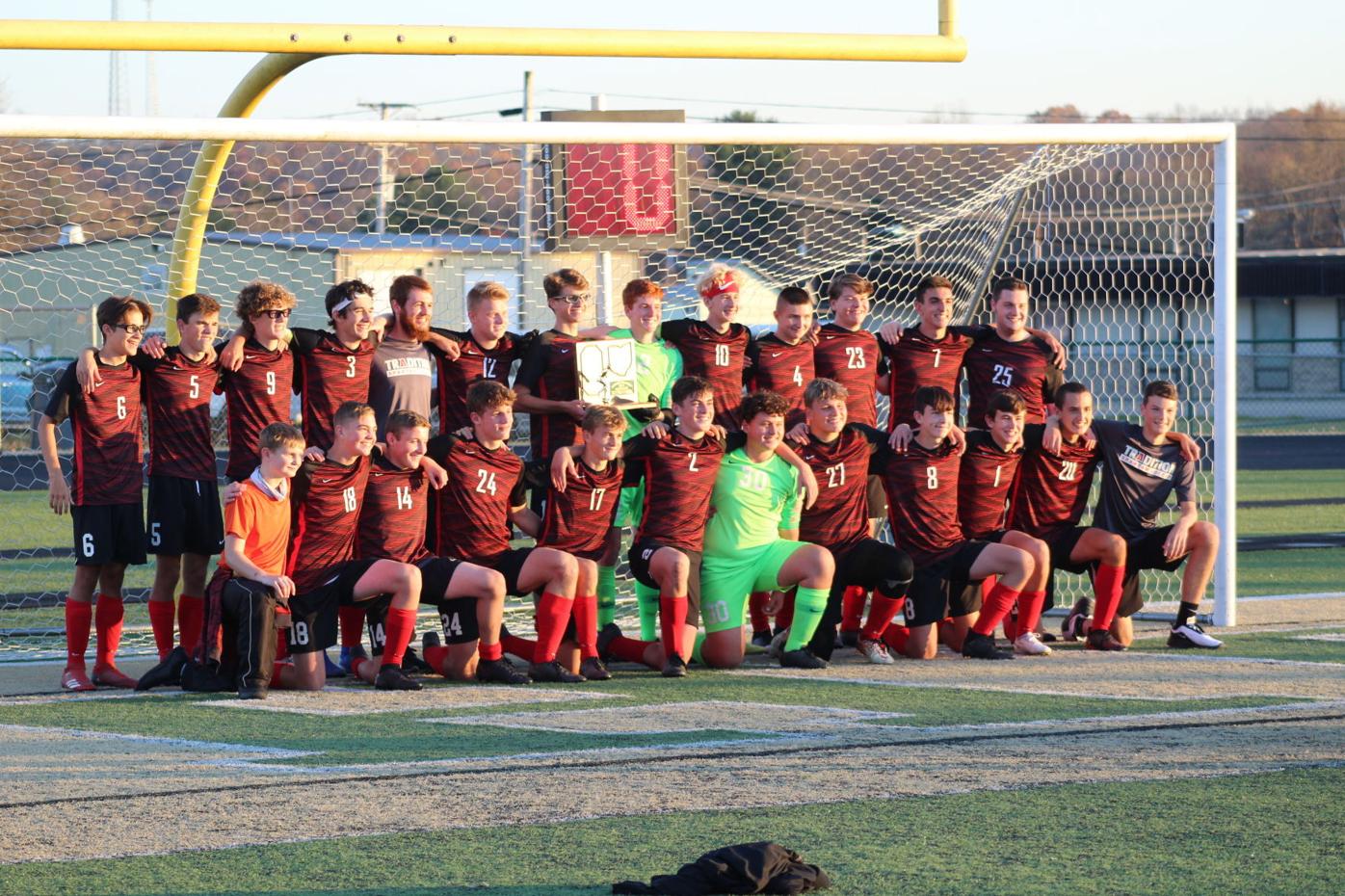 The Alexander Spartans pose with the Division II regional championship trophy after beating Dover 3-2 in overtime on Saturday. 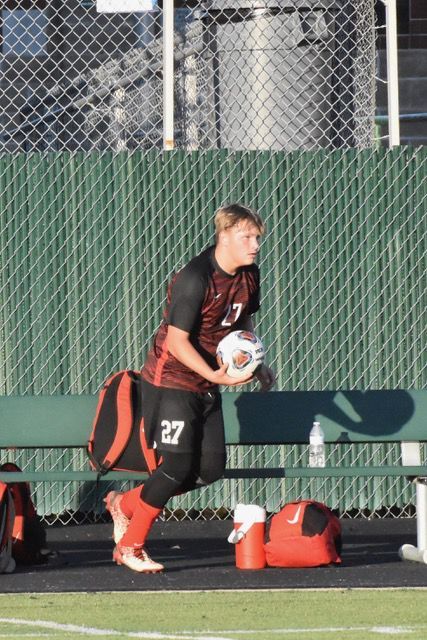 Alexander’s Jace Ervin prepares for a throw in during Saturday’s Division II regional final against Dover.

Alexander’s Austin Shields (7) celebrates with head coach Kirk Crow after the Spartans’ 3-2 overtime win over Dover. The Spartans advance to the Final Four for the first time in program history.

The Alexander Spartans pose with the Division II regional championship trophy after beating Dover 3-2 in overtime on Saturday.

Alexander’s Jace Ervin prepares for a throw in during Saturday’s Division II regional final against Dover.

Alexander senior Joe Trogdon admitted that his duty on most throw-in situations isn’t too complicated.

“My main job is just sit there and try and block the keeper’s view,” he said.

When the circumstances called for Trogdon to expand his role, he stepped up with one of the biggest goals in Alexander’s storied soccer history.

The Spartans are regional champions and advance to the Division II Final Four for the first time in program history.

“It’s a dream,” Trogdon said. “I’m not here without everyone else. From (head coach Kirk) Crow to everyone else that’s played, it’s been a dream. To be able to be the first team ever from our school to get to this point, it’s unreal.”

The win also allowed Alexander to set a program record for wins in a season, improving to 18-1-1.

“These guys have been working their tails off since June, having a dream,” Alexander coach Kirk Crow said. “We said in June, in this crazy year, why don’t we go let the state know who we are? I think that’s something that’s driven these guys since June. We’re here. It’s unbelievable.”

Jace Ervin delivered one of his powerful throws toward the net.

When the ball got deflected, Trogdon knew what to do. He was able to make a play and deliver a shot that got past Mastrione.

“I saw it get deflected,” Trogdon said. “Just did what anyone else would have done. I tried to put it in the net.”

Trogdon’s sudden-death overtime goal touched off a wild celebration. The Spartans poured out onto the field, the crowd roaring behind them.

It was a fitting way for the Spartans to win the game. Scoring on set plays has been a strength all season.

“We feel like any time we have an opportunity to get the ball in the goal mouth, with guys like Kyler (D’Augustino) and Tyler (Fritchley) and Parker (Bolin), and everything else, that we have a chance to make something happen.”

Saturday’s regional championship was a back-and-forth battle the entire way, as the game was tied at 1-1 for 57 minutes and 20 seconds of game time.

It appeared that Austin Shields might be the hero of the game, as the Spartan senior finally broke the 1-1 deadlock.

Shields lined up for a free kick at the 20-yard line after a Dover infraction. Alexander’s all-time assist leader, Crow figured Shields would be looking to drop another dime to one of his teammates.

“From the distance he was, I always have confidence in him to shoot it,” Crow said. “I thought he was probably going to try and put it on the back post for Kyler or somebody to come in.”

Shields went for it all, blasting a kick that got past Mastrione to give Alexander a 2-1 lead.

Only 3:47 was left in regulation, as the Spartans’ crowd erupted after Shields’ spectacular shot.

“He says he gets these moments where he just feels it. It’s unbelievable,” Crow said.

With the clock ticking down under two minutes, Alexander was unable to clear the ball from in front of the net. Dover’s Seth Wisintainer was able to deliver a goal with 1:47 remaining that kept the Tornadoes’ season alive.

“The last goal they scored was one of those things where we just needed to get something on it and get it out of there,” Crow said. “We just didn’t make the play.”

Overtime would follow. Alexander was so close to the state tournament, but had no choice but to regroup.

“We’ve been down before,” Trogdon said. “We’ve been scored on before. We just had to not let it get to our heads.”

Dover’s Ethan Kopp put a shot on net in the first 90 seconds of overtime, but Alexander’s Clayton Williams came up with the save.

That gave Alexander the chance to get possession back, and it eventually led to Ervin’s throw in, and Trogdon’s goal.

It was another comeback for Alexander, as it allowed the first goal for the third straight tournament game. Dover’s Carter Zeedyk was able to kick one past Williams with 36:43 left on the first-half clock, putting Alexander in a 1-0 hole.

The Spartans tied the game at 1-1 with 21:03 left in the first half. Shields sent a shot toward the net that Mastrione appeared to initially stop. He wasn’t able to collect it, and Preston Truax punched it in to even the contest.

Both defenses settled in from there, as the two soccer titans took turns thwarting each other’s attack.

Dover was held to five shots on goal, compared to 12 for Alexander. Mastrione had five saves for the Tornadoes, keeping Alexander at bay until the final minutes of regulation and into overtime.

The Spartans celebrated afterwards, sharing hugs and posing with the regional championship trophy. It’s the first regional title in any sport for Alexander High School since winning a Division III state volleyball championship in 2008.

Tippecanoe is 22-0-0 after beating Cincinnati Summit Country Day 2-1 on Saturday.

“It’s going to be exciting,” Trogdon said. “We’re looking forward to it.”