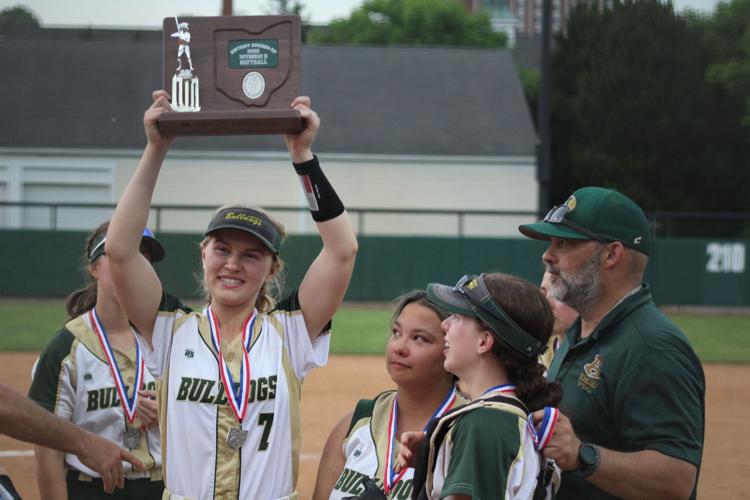 Athens senior Olivia Kaiser holds up the district runner-up trophy on Thursday at Ohio University. The Bulldogs lost to Sheridan, 7-6. 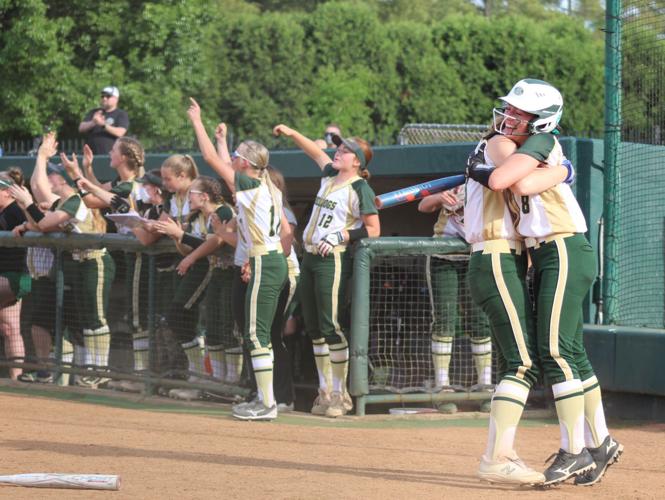 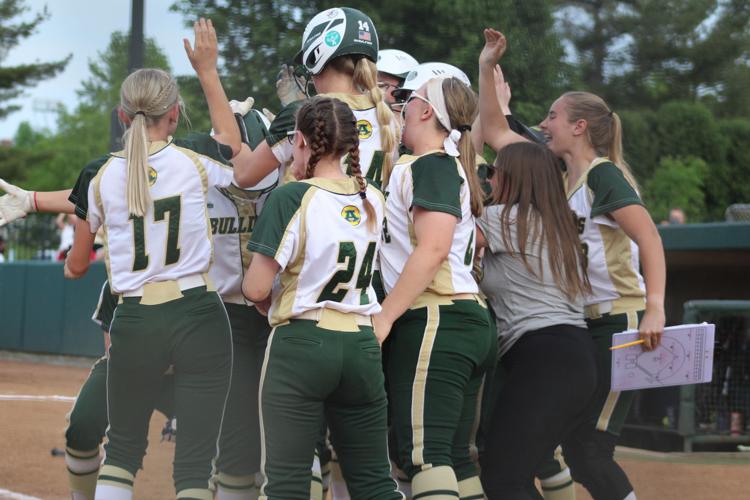 The Athens Bulldogs celebrate after Olivia Banks hit a three-run home run in the sixth inning against Sheridan in a Division II district final. Banks’ home run tied the game at 4-4, but Sheridan went on to win, 7-6. 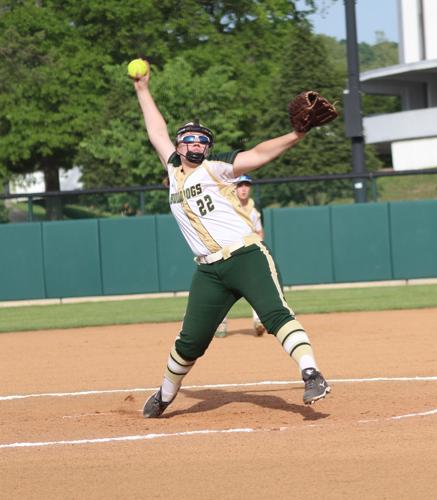 Athens senior Olivia Kaiser holds up the district runner-up trophy on Thursday at Ohio University. The Bulldogs lost to Sheridan, 7-6.

The Athens Bulldogs celebrate after Olivia Banks hit a three-run home run in the sixth inning against Sheridan in a Division II district final. Banks’ home run tied the game at 4-4, but Sheridan went on to win, 7-6.

So close to completing another dramatic comeback, instead it was the Generals who celebrated the thrilling victory.

Sheridan scored three runs in the bottom of the seventh inning, stealing a 7-6 victory away from Athens in a classic Division II Southeast District championship game in front of a big crowd at the Ohio University Softball Field.

The Bulldogs scored five unanswered runs to go ahead of Sheridan 6-4 before the fateful bottom of the seventh inning.

“They can’t leave here with their heads down,” Athens coach Roger Bissell said. “There’s 18 teams in this district that would love to have a runner-up plaque and two years in a row we’ve been in this game. Against the same team and both games were fought very hard until the last inning.”

Exactly a year ago to the day, Athens beat Sheridan 6-3 in a district championship game, Olivia Banks hitting a three-run home run in the sixth inning to propel the ‘Dogs to a win at Trimble High School.

The Generals withstood another three-run home run by Banks on Thursday to ultimately get their revenge.

Athens led 6-4 going to the bottom of the seventh inning, and pitcher Ashleigh James caught a pop out to retire lead-off hitter Cate Conrad.

The Bulldogs (18-8) were in a great position at that point, but Avery Mueller lined a double to center field to start Sheridan’s final comeback bid.

The situation got tougher for Athens after an error in the infield put runners on the corners with one out.

That bought Payton Powell to the plate. She lined a 1-1 pitch to center field, easily scoring Cora Hall to tie the game.

The ball took a hop in the outfield, getting past the Bulldogs and rolling toward the wall for a double.

That allowed O’Brien to race home all the way from first base.

It was a stunning conclusion to the contest, the Generals finding the final three runs in a matter of 15 pitches.

Athens had played error-free softball until the seventh inning, and has been spectacular in the field all season.

“Sometimes even the best players make errors, it just came at an unfortunate time,” Bissell said. “But those two kids don’t need to hold their heads down either. They played their butts off. It was just a couple unfortunate plays that took us out of that inning.”

Until those final moments of the seventh inning, it appeared Athens’ stirring comeback in the top of the sixth would be the story of the night.

The Bulldogs trailed 4-1 against Hall, a freshman pitcher for Sheridan.

Hall had retired 13 of 14 hitters since allowing a first-inning run on Kendra Hammonds’ single.

Athens figured Hall out in the sixth, with Bailee Toadvine and Kayla Hammonds opening the inning with singles.

That set the table for Banks, and she delivered another mammoth tournament home run against Sheridan.

Banks took a 1-1 pitch to center field, clearing the fence for a three-run shot.

Athens’ crowd went crazy as the Bulldogs tied the game at 4-4, and Banks had another signature district-final blast.

“Deja vu with her,” Bissell said. “She came up in a big situation. She tied the game for us.”

The Bulldogs weren’t done. With two out, Olivia Kaiser and Taylor Orcutt followed with singles.

James then scored both runners with a long single to left field, giving Athens a 6-4 advantage.

The Bulldogs batted around in the sixth, scoring five runs on six hits.

“We weren’t concerned about scoring runs here,” Bissell said. “It just took ourselves some time to get adjusted. The Hall girl pitched a nice game and that sixth inning we were able to capitalize on some of their mistakes.”

James gave up a lead-off single in the sixth to Breanna Reber, but third baseman Autumn Hembree made three plays in a row to record the next three outs and move the game to the seventh.

Sheridan went ahead 2-1 after the bottom of the first thanks to Powell’s two-run single.

Both pitchers settled in from there, before Sheridan went ahead 4-1 in the bottom of the fifth.

Hall hit an RBI double for a 3-1 lead, then O’Brien followed with a sacrifice fly.

James struck out three and walked one in 6 1-3 innings of work.

“Ashleigh kept us in that game the entire game and our defense played behind her very well,” Bissell said. “I thought, just keep it here, give our offense an opportunity to work.”

The Bulldogs’ offense went to work in the sixth, but Sheridan had the final at-bat, and the final rally.

The Generals advance to the Division II regional semifinals, and will face John Glenn on Wednesday at Pickerington Central High School.

The Bulldogs’ season will be remembered for how they rallied down the stretch. They were 10-7 after consecutive one-run losses at home to Nelsonville-York and River Valley.

Athens’ season could have spiraled downward at that point, but instead the ‘Dogs rallied to win eight in a row to advance to the district championship.

“I just think these kids throughout that process learned how to appreciate each other,” Bissell said. “Learned how to trust each other. Learned how to play with each other and play together as a team. And once they figured that out that’s when that stretch began. They’re a close knit group. They’ve played together for a long time.”

The Bulldogs came up just short of a regional tournament rematch with John Glenn, but the future is still bright.

Athens will have to say goodbye to catcher Taylor Orcutt and left fielder Olivia Kaiser. The two were a huge part of the Bulldogs’ run of 43 wins the last two seasons, but the rest of the lineup can return for perhaps another tournament rematch with Sheridan.

“We’re losing two important kids, but we have nine returning from this group. We’re hoping to be back here next year too,” Bissell said.

Check your email for details.

Submitting this form below will send a message to your email with a link to change your password.

An email message containing instructions on how to reset your password has been sent to the e-mail address listed on your account.

Your purchase was successful, and you are now logged in.

A receipt was sent to your email.