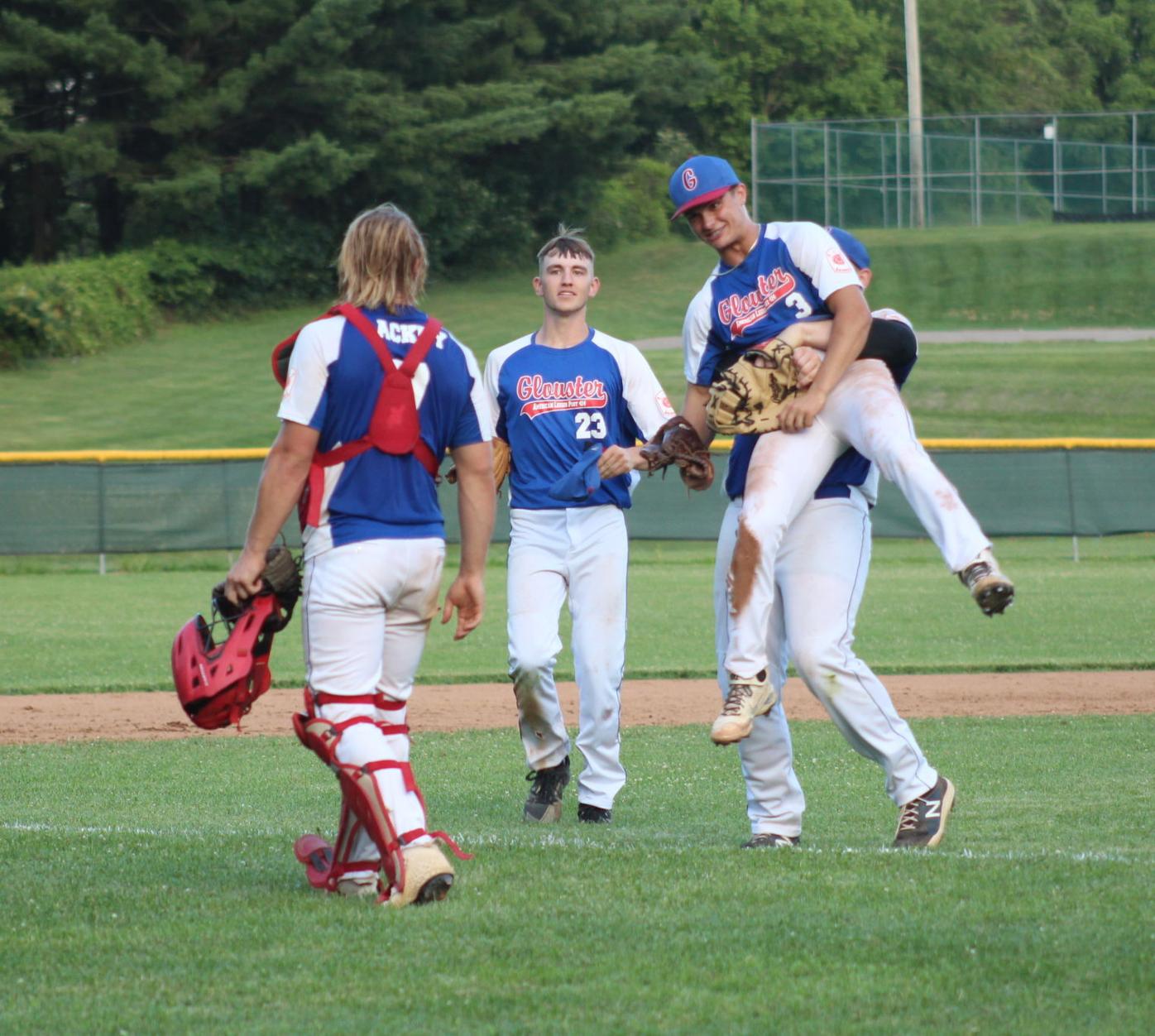 Glouster’s Blayton Cox is lifted into the air by teammate Drew Harris, while Tabor Lackey (left) and Collin Jarvis (23) look on. Cox got the save in Glouster’s 4-3 win at Athens on Friday. 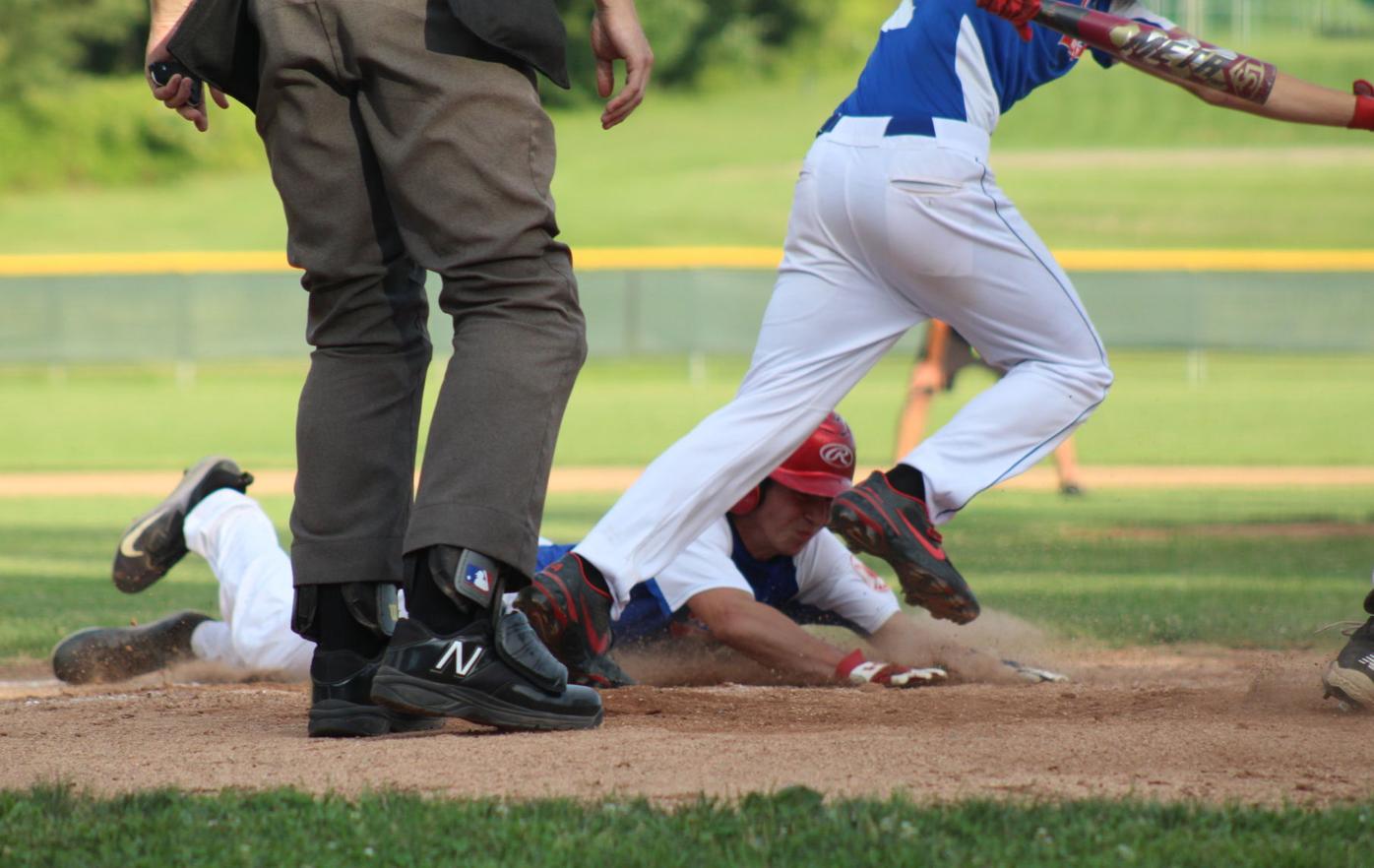 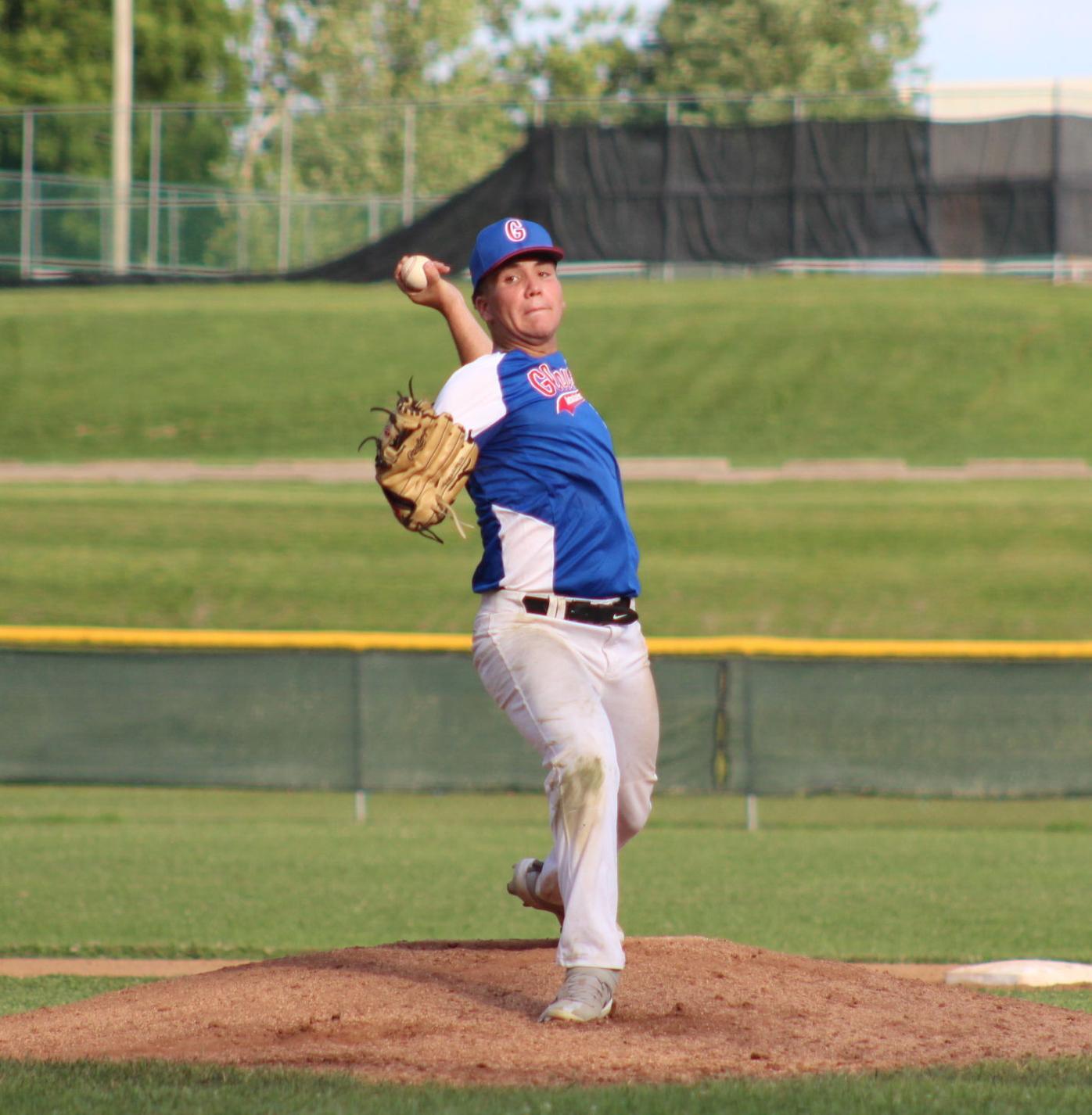 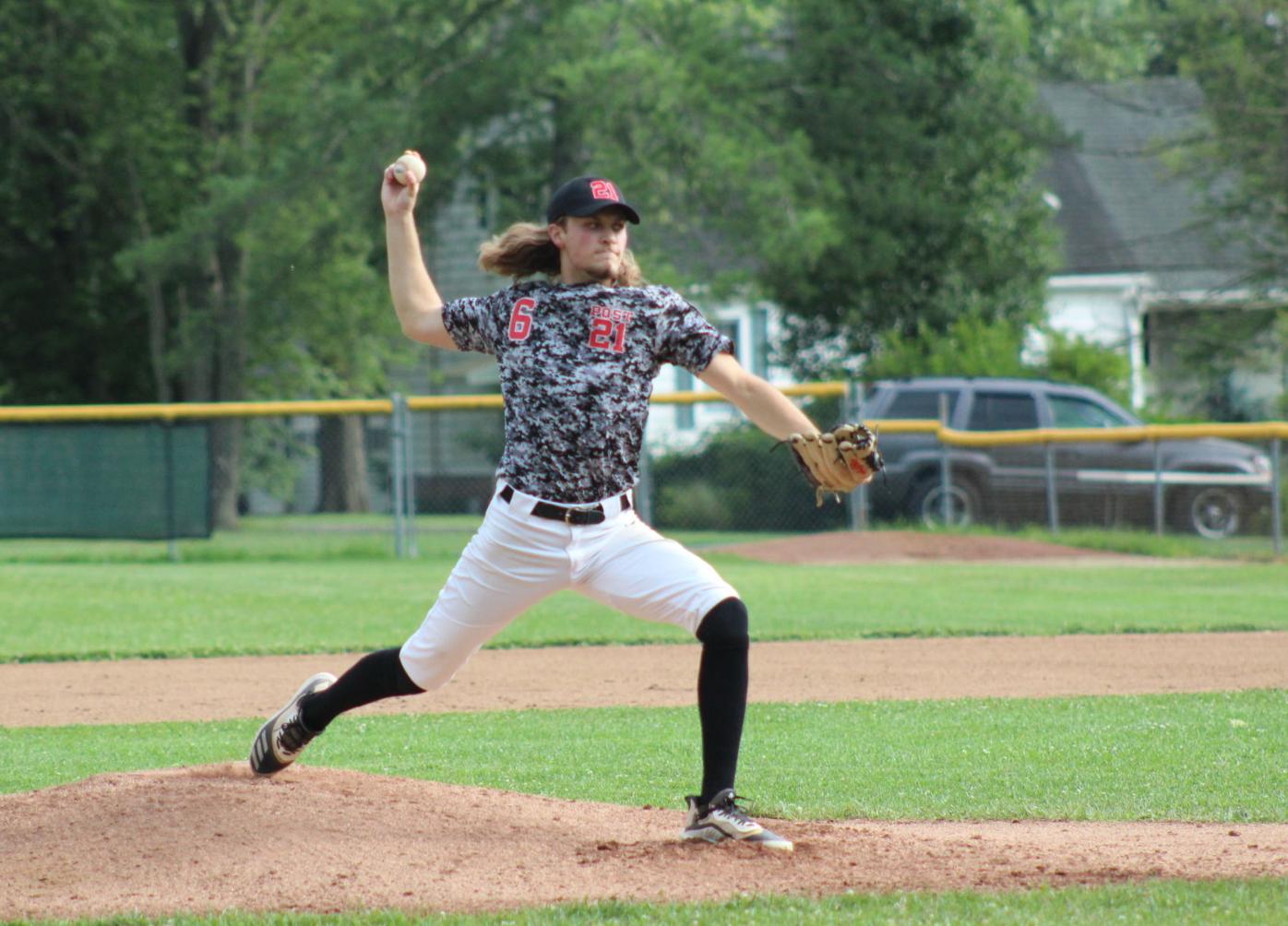 Glouster’s Blayton Cox is lifted into the air by teammate Drew Harris, while Tabor Lackey (left) and Collin Jarvis (23) look on. Cox got the save in Glouster’s 4-3 win at Athens on Friday.

Glouster Post 414 appears to be hitting their stride at the most important time of the summer.

Post 414 picked up another win behind the arm of John Hobbs, 4-3, on Friday at Rannow Field against Athens Post 21.

Glouster has won five out of its last six games, including two against Post 21.

“They’re starting to come together as a team,” Glouster coach Todd Wisor Jr. said. “You can hear them during the game, they’re cheering. Their bats are coming to life and they’re starting to believe in each other.”

The win allowed Glouster to even the regular season series against Athens at two wins apiece.

Hobbs, a left-handed pitcher from Alexander, was a big reason by Glouster won the final regular season meeting between the two Athens County teams.

Hobbs issued a walk and hit a batter in the first inning, with Athens eventually getting runners at second and third with just one out.

Hobbs worked his way out of that jam, and seemed to get stronger as the game wore on.

“Hobbs pitched terrific,” Wisor said. “He seemed to find himself. The longer he pitches, the stronger he seems to get. Once he finds his groove, he gets his curveball working, his fastball going. He’s a tough kid. He’s tough mentally. He was pitching great tonight.”

Hobbs left with a 4-1 lead, and Post 21 nearly had a dramatic comeback in the bottom of the seventh.

Blayton Cox came on to pitch the seventh for Glouster. Andrew Stephens drew a walk, Reese Wallace hit a single and Derrick Welsh drew a walk to load the bases with no outs.

The situation became more difficult for Glouster when Will Ginder drew another walk, making it 4-2 with the bases still loaded and none out.

Cox was able to buckle down from there. He got Marcus Stevers to hit a pop up to Landon Wisor at second base for the first out.

Cox then struck out Jake Goldsberry on three pitches for the second out.

Post 21’s Carter Wharton came up with two outs. Cox had a delivery get away for a wild pitch, allowing Wallace to score to make it 4-3.

With the tying and winning runs in scoring position, Cox was able to get the third striking swinging, allowing Glouster to escape.

“He hadn’t pitched a whole lot here last couple games,” Todd Wisor said. “His arm was kind of cold coming in. We kind of worried about it, but he’s a tough kid. He found a way to buckle down. He wanted to do it for his teammates that brought him this far.”

It was a tough finish for Athens, which battled back into the game but still left 10 runners stranded on base as it searched for the big hit all night.

“I don’t know how many hits we had, but we don’t put the ball in play enough to make them make any plays,” Athens coach Kyle Lonas said. “We’re looking for the hit when we have runners in scoring position, but we’re struggling to find that hit right now. We’ve not been finding it.”

Wallace took the mound for Athens and kept Post 21 in the game.

A 2020 graduate of Athens High School, it was Wallace’s longest stint on the mound since his junior season in 2019.

“He just does a nice job throwing, using his off-speed stuff, especially being the first time he’s thrown in two years,” Lonas said.

Wallace took the loss, but gave Athens 5 1-3 innings, allowing four runs on five hits. He struck out two and walked one.

Wallace and Hobbs matched zeroes on the scoreboard until the top of the fourth when Glouster took the lead.

Tabor Lackey started the inning with a hard-hit single past third and down the left-field line. Cameron Bayha followed by getting hit by a pitch, and they moved up to second and third on a double steal.

Post 21 made a defensive play to end the inning, when Bayha tried to score from third on another potential wild pitch.

Catcher Marcus Stevers was able to locate the baseball, and Wallace tagged out Bayha at home plate for the final out.

Glouster added another run in spectacular fashion in the top of the fifth.

Landon Wisor was at third base with two outs, and Brandon Burdette had a full count at the plate against Wallace.

Wallace went into his windup to deliver the pitch to home plate, and Wisor broke for home.

He arrived at home plate as the pitch did, sliding home safely for the stolen base, and a 2-0 lead.

It was also ball four, with Burdette advancing to first base.

Todd Wisor said it’s a play he’s always wanted to pull off in a game situation, and Landon Wisor delivered.

“I asked him, ‘how do you feel?’ He said, “I’m ready,’” Todd Wisor said. “I said, 3-2, as soon as he starts his windup, I said, get there. Before you knew it, he was sliding across home so it worked out good for us. It’s one of those plays I’ll always remember. First time I’ve ever done it in a ball game. No better game than tonight.”

Athens’ only run against Hobbs came in the bottom of the fifth, Derrick Welsh’s sacrifice fly to center field scoring Andrew Stephens to make it 2-1.

Glouster added a pair of crucial insurance runs in the sixth. Lackey was hit by a pitch and Bayha followed with a single to start the inning.

Bryce Downs hit a ball to third, reaching on a fielding error but picking up an RBI when Lackey scored for a 3-1 lead.

Collin Jarvis later added an RBI single to right field, scoring Bayha for a 4-1 lead and ending Wallace’s day on the mound.

The district tournament is set to begin in Lancaster on July 19, and Athens and Glouster will both be in the tournament field.

Until then, they have played for the final time in the regular season, as Glouster continues to surge toward the finish line of the legion baseball season.

“I think we’re finding our stride now and we’re going to be somebody to reckon with in the tournament,” Todd Wisor said.