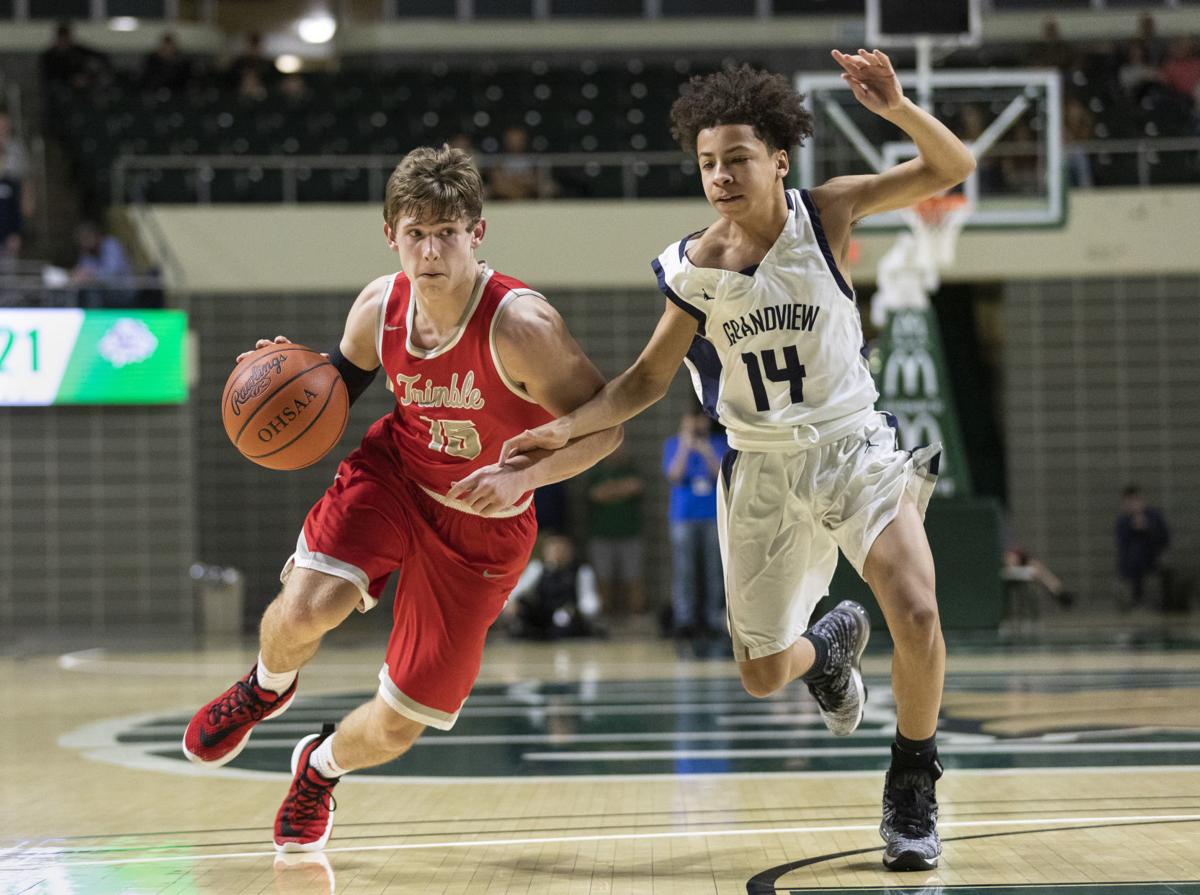 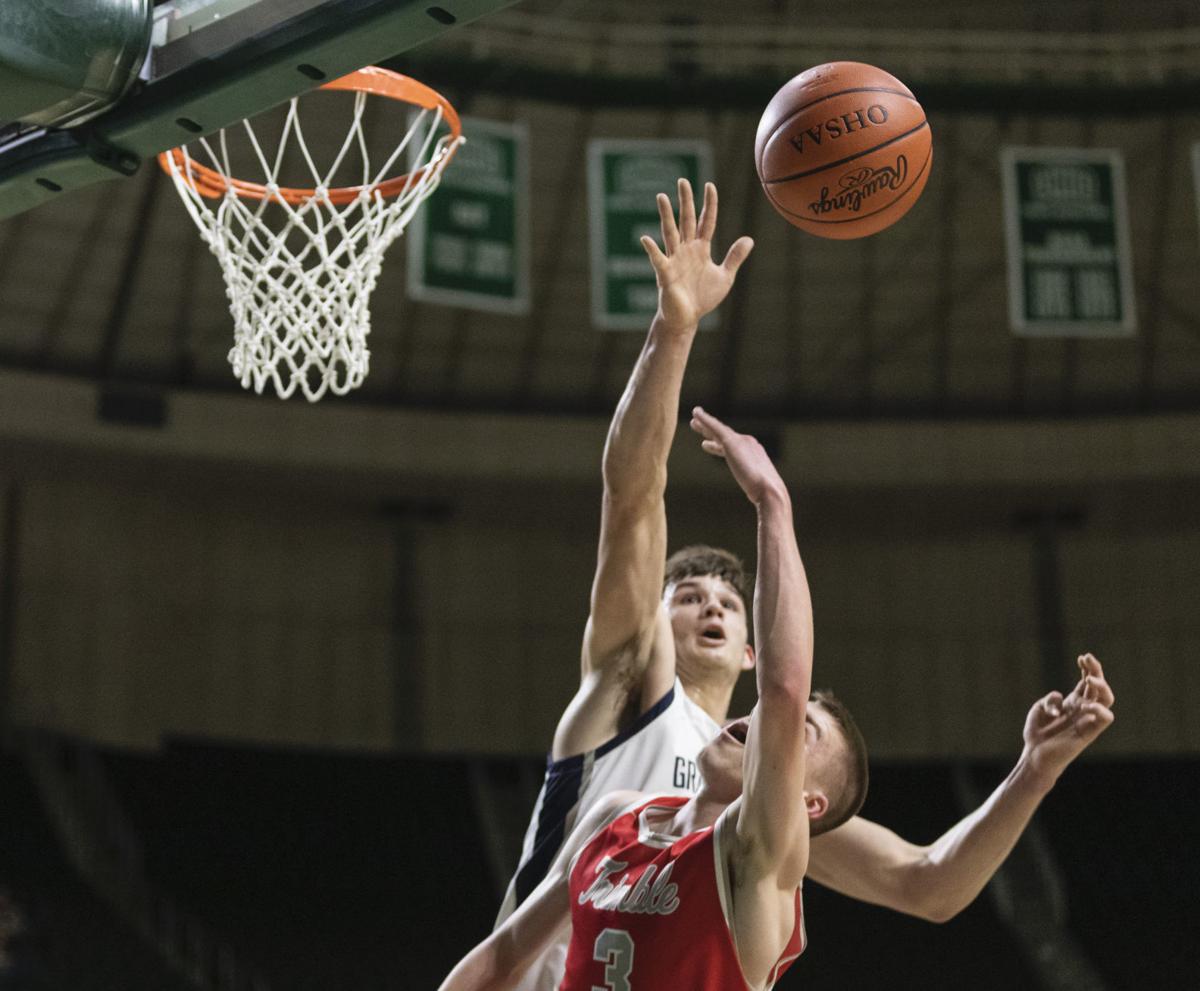 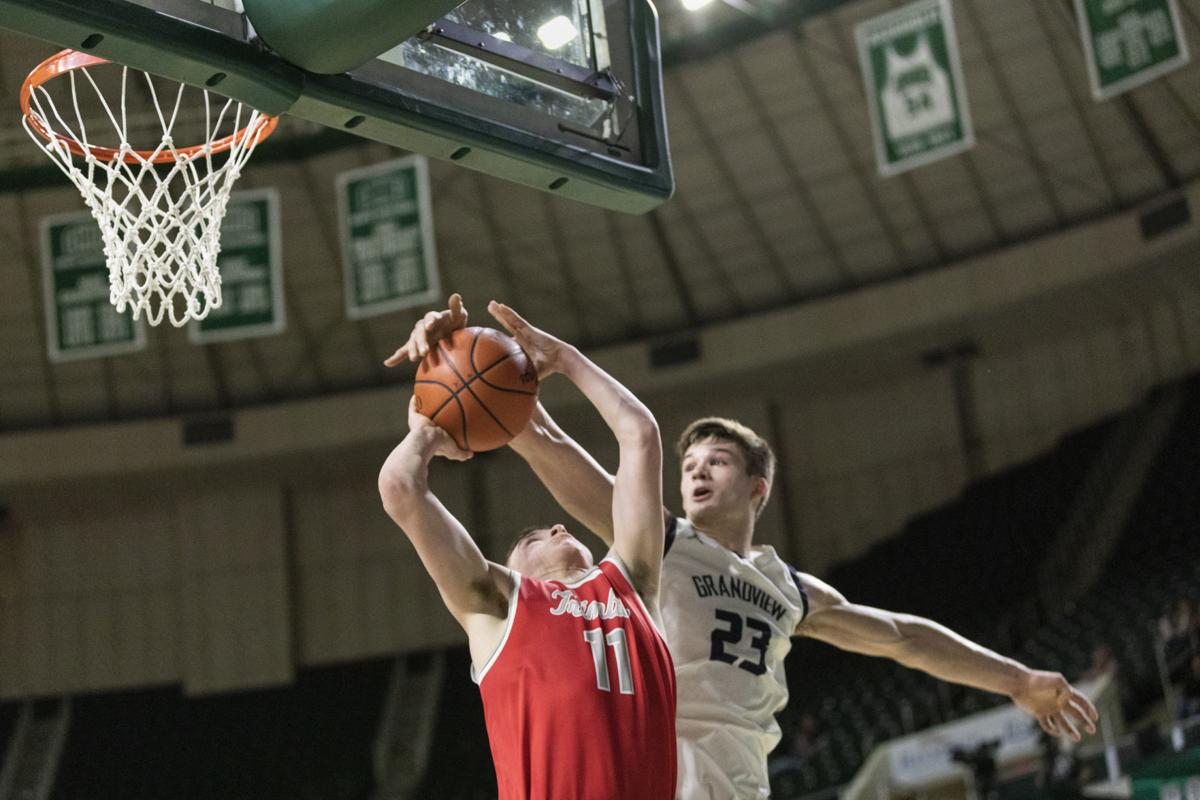 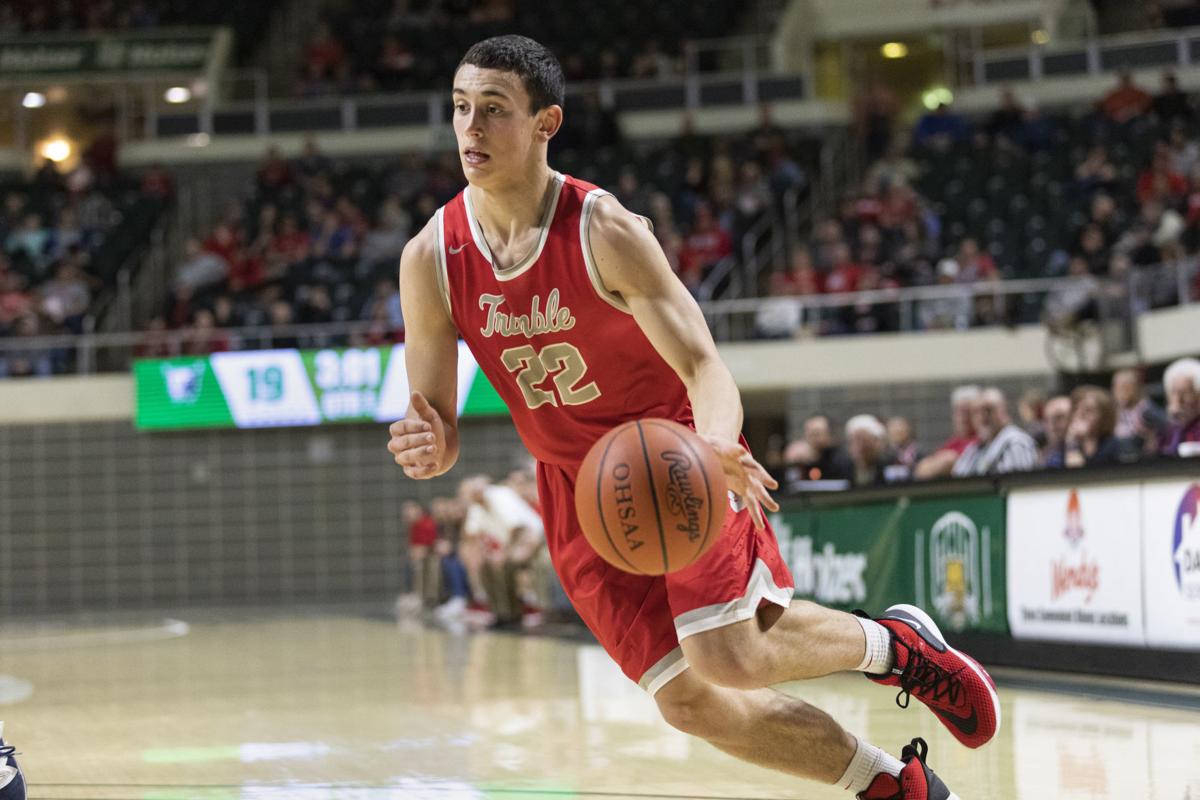 Grandview Heights’ Luke Lachey collected a steal around mid-court and dribbled the basketball the other way. The 6-foot-7 senior took off from inside the paint, soaring through the air as he completed the one-man fast-break with a two-hand slam dunk.

The Trimble Tomcats have worn down and defeated opponents all season long, but simply ran into a foe who was too big to conquer.

Grandview Heights, a top-seed from the Central District, ended Trimble’s season with a 62-32 win in a Division IV regional semifinal at Ohio University’s Convocation Center on Tuesday.

The Bobcats (22-5) simply overwhelmed the Tomcats from the start, leading 27-8 after a quarter and never looking back.

Lachey has signed to play tight end at Iowa University and is the son of former Ohio State and NFL tackle Jim Lachey. His size on both ends of the court was something the Tomcats haven’t seen all season, and weren’t able to match up with on Tuesday.

“Lachey’s a freak, and I don’t mean that in a negative way, but he’s a matchup issue when he’s able to get up and down like he did tonight,” Grandview Heights coach Ray Corbet said. “Luke’s a tough matchup because we can move him different places. We don’t like just posting him.”

Lachey isn’t even the Bobcats’ leading scorer on the season though — that honor goes to senior guard Brian Collier.

He again led Grandview Heights against Trimble with 22 points. He made 5 of 9 shots from beyond the arc, including 4 of 5 from distance in the tone-setting opening quarter.

The duo outscored the Tomcats on their own, and accounted for 20 of the Bobcats’ 27 first-quarter points.

“We wanted the other kids to beat us, and we didn’t let that happen,” Trimble coach Howie Caldwell said.

Grandview Heights set the tone when Lachey got behind the defense 10 seconds into the game for an emphatic dunk. Trimble was able to tie the game briefly at 2-2, but the Bobcats scored 12 unanswered points and never had the lead dip below single digits.

“The thing I was disappointed was that after the jump ball, 10 seconds into the game, we gave up a dunk,” Caldwell said.

Lachey’s steal and slam made it 11-2 early on. Caldwell used his second timeout 3:32 into the game after a Collier 3 pushed the advantage to 17-4.

Grandview Heights continued to lead 31-10 after another Lachey basket in the second quarter.

While Lachey was a serious threat on offense — he even hit a pull-up jumper, forcing the defense to guard him everywhere on the court — he was an absolute terror on defense.

Lachey had consecutive blocks during one dominating sequence. His defense also made life tough for Trimble’s leading scorer, Blake Guffey.

The 6-foot sophomore had a difficult time getting open looks underneath with Lachey always lurking. Guffey finished with 12 points, seven rebounds and four steals.

The Tomcats were able to stop the bleeding by holding the Bobcats to six second-quarter points. But Trimble only scored five points in the frame, and trailed 33-13 at halftime.

“The defense, I didn’t think it was that bad,” Caldwell said. “Boy, our offense wasn’t very good tonight.”

“I saw enough of Trimble, I knew that if they got out, they love to run and they are viscous on the offensive glass,” Corbet said. “They’re physical. He’s got athletes. They may not all be polished basketball players, but my god are they fundamentally sound. We were just hoping that our defensive pressure would be able to sustain, but I’m telling you right now, they (Trimble) put a lot of points on the board throughout the year.”

Grandview Heights ended the third quarter on a 7-0 run to lead 49-21 heading to the fourth quarter.

The Bobcats will return to the Convo on Friday to take on Berlin Hiland at 7 p.m. in a regional final. Berlin Hiland scored a dramatic 45-44 win over Peebles on Tuesday.

Weber, Kittle and Sawyer Koons were all three or four-year varsity players. They helped Trimble to a 59-14 record over the last three seasons, and 73 wins over the last four years.

Caldwell has coached a lot of groups during his time — he will enter the offseason with 544 career wins, including 119 at Trimble alone — and he puts the group up there with any he’s had.

“I would say they are the most dedicated individuals that I’ve been around,” he said. “I told our players after the game, they lived in the weight room. You could see the strength just oozing off of their body. We had kids that never missed a shootout, never missed team camp. Devoted an awful lot of time.

“Like I’ve said several times, people don’t fall to the top of the mountain, they climb to get there. These seniors, they climbed and they climbed. They’ve achieved an awful lot.”