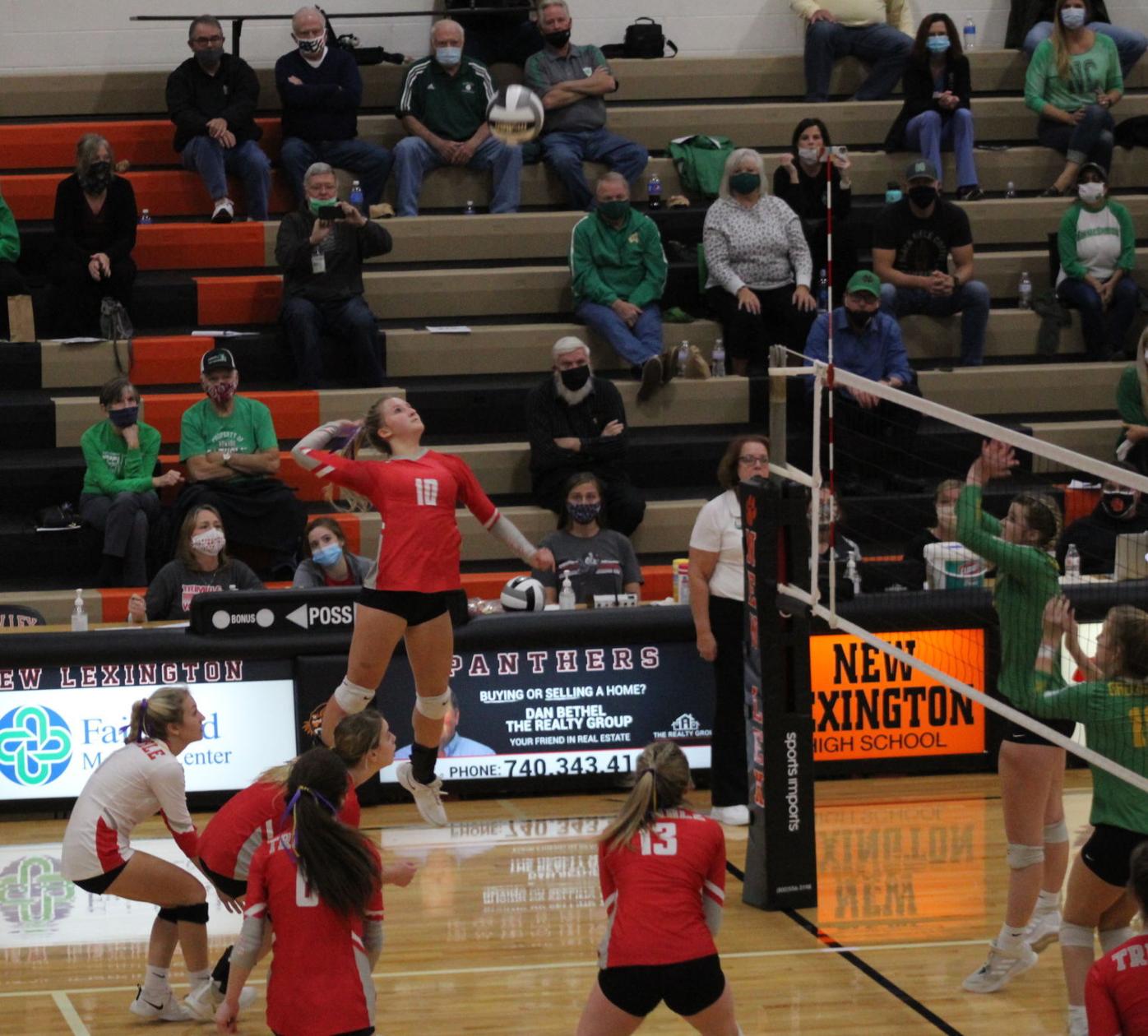 Trimble’s Laikyn Imler (10) goes up for a kill attempt during a Division IV, Region 15 semifinal against Newark Catholic. Imler had 11 kills, but Trimble lost 3-1 to close its season at 21-5. 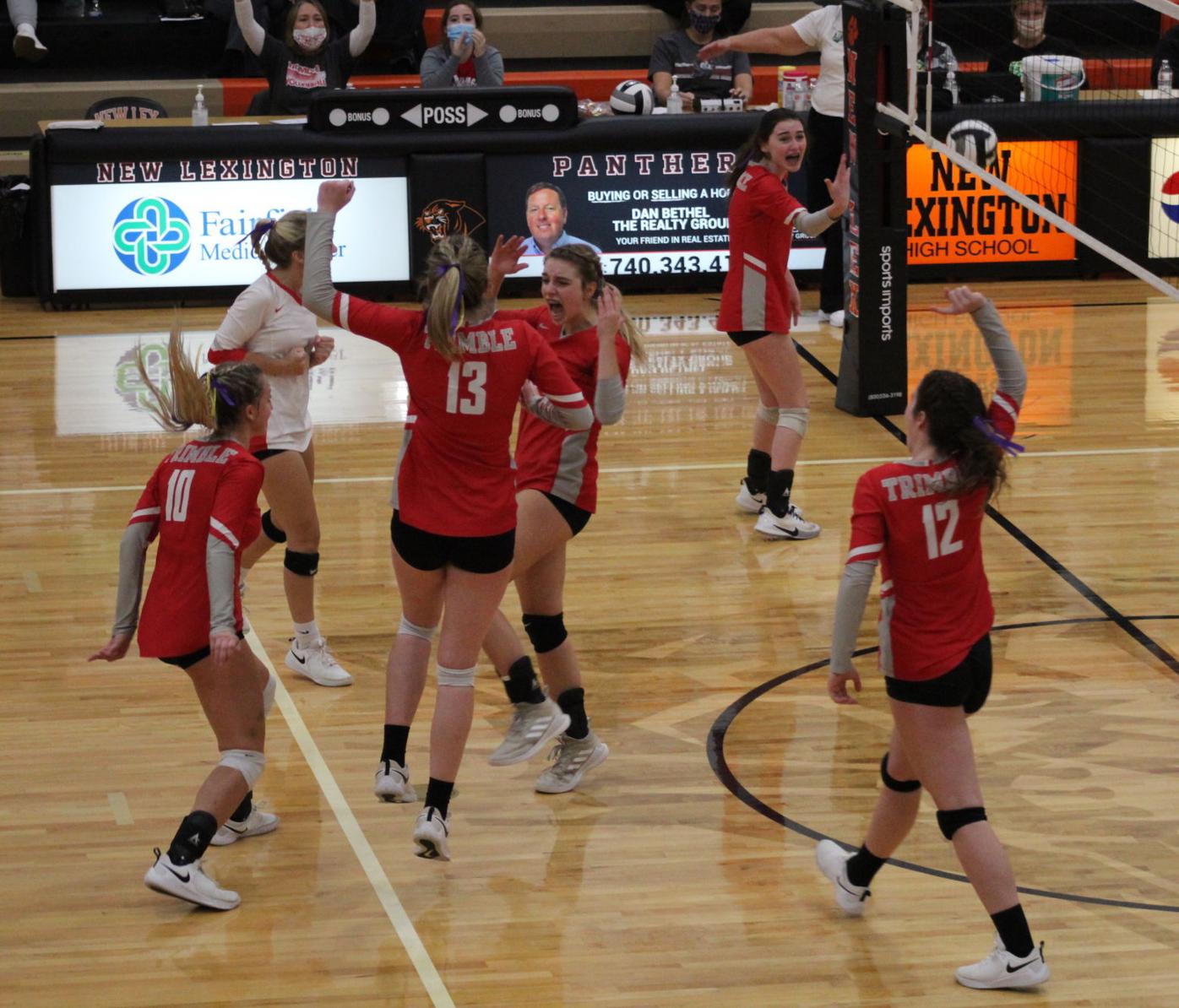 Trimble’s Laikyn Imler (10) goes up for a kill attempt during a Division IV, Region 15 semifinal against Newark Catholic. Imler had 11 kills, but Trimble lost 3-1 to close its season at 21-5.

NEW LEXINGTON — Newark Catholic coach Caileigh Hughes knows how important seniors and experience are when it comes to the postseason.

“We are really blessed that we have seven (seniors),” Hughes said. “There’s a lot to be said for leadership and experience.”

While Newark Catholic’s opponent on Thursday — the Trimble Tomcats — have plenty of leadership, they were involved in a brand new experience against the Green Wave.

Newark Catholic has the experience — it played in the Division IV state tournament a year ago — as well as having history on its side. The Green Wave have been in the state tournament 19 times, winning eight state championships.

The loss stopped the best season in Trimble history, as the Tomcats finished 21-5 after winning the program’s first district championship.

Trimble had plenty to be proud of, winning eight more matches than a season ago under the direction of head coach Shelly Lackey.

The Tomcats were able to have all of that success without a senior on their roster. And they were able to scratch out a dramatic second-set win, making Newark Catholic work for the victory.

“Love their hustle, love their heart, love their intensity,” Hughes said of the Tomcats. “They didn’t give up at all. Stayed completely consistent. Dug up really well, served really nice.”

The Green Wave (19-5) were enough of a challenge, but the Tomcats faced the matchup without one of their leaders in junior middle hitter Adelynn Stevens, who was forced to miss the contest.

Stevens has been a vital part of Trimble’s success, and without her Lackey was forced to juggle rotations. Riley Campbell moved to the middle, and freshman Emma Orsborne was inserted into the lineup.

“I think our challenge was we had to run a lineup that we never ran before,” Lackey said. “It took us quite some time to adjust to that. I think they battled well considering Adelynn’s a full-court player, and she’s not here.

“When you had Adelynn that has a pass percentage as high as she does and she comes off the floor, that hurts.”

While the Tomcats played without one of their top offensive and defensive options, Newark Catholic had all of its weapons on full display.

Newark Catholic had a strong attack regardless of which rotation it was in, making it difficult on the Tomcats’ defense.

“When you keep your offense that spread out and you have that many people, it definitely makes it challenging to play defense against because you have to play true defense,” Hughes said. “Your blockers can’t cheat.”

That balanced offense led to Green Wave runs in all three of its set victories. The first set was tied at 9-9 after Faith Handley’s kill.

Newark Catholic ripped off a 16-3 run to close out the set, taking the early lead.

The highlight of the night for the Tomcats undoubtedly came in the second set. Trimble faced deficits of 18-14 and 20-17, but continued to stay with the Green Wave.

Newark Catholic fought off set point, and went ahead 25-24 on Kauble’s kill.

However, a Green Wave service error tied the score at 25-25 — the 12th and final tie of the set — and Trimble went ahead on Handley’s kill.

The Tomcats’ second chance at set point was a winner, as Emma Orsborne sent a shot over the net that wasn’t returned by Newark Catholic.

Trimble had pulled off the thrilling 27-25 victory, evening the match at 1-1.

“I felt like our other kids stepped up and that was really good to see,” Lackey said. “I’m really proud of ourselves. I thought we handled ourselves well considering the circumstances and I thought they played well.”

Trimble scored the first two points of the third set, but the Green Wave seemed to settle in after that.

The Tomcats had to regroup after the 25-15 setback, but the Green Wave scored the first five points of the fourth set. Lackey was forced to use an early timeout to try and slow the momentum.

Trimble did fight back, trailing just 14-11 after a Campbell kill and a Green Wave attack error.

Perhaps the final momentum swing occurred on the following point. The two regional qualifiers engage in a back-and-forth volley, with Laikyn Imler digging out a hot shot at one point to keep a play alive.

The Trimble crowd came to life during the sequence, but Langenbrunner ended it when she snuck a kill into the Tomcat defense during a set attempt.

The play felt like a rally killer at the time for Trimble, and the Green Wave responded by scoring the next five points for a 20-11 edge after consecutive kills by Peddicord.

The final kill came from Antritt in the 25-16 win, sending Newark Catholic to the regional finals.

The Green Wave will face South Webster, which was a 3-0 winner over Shadyside in Thursday’s second regional semifinal. The matchup will occur Saturday at 2 p.m. in New Lexington.

Imler led the Tomcats once again with 11 kills and three aces on the night, while Campbell added six kills. Handley had four kills, while Briana Orsborne added three kills. Jacie Orsborne had 22 assists.

“Going into the season next year, I think it will help us tremendously because we’ll be able to pick up where we left off,” Lackey said. “That’s going to be great.”