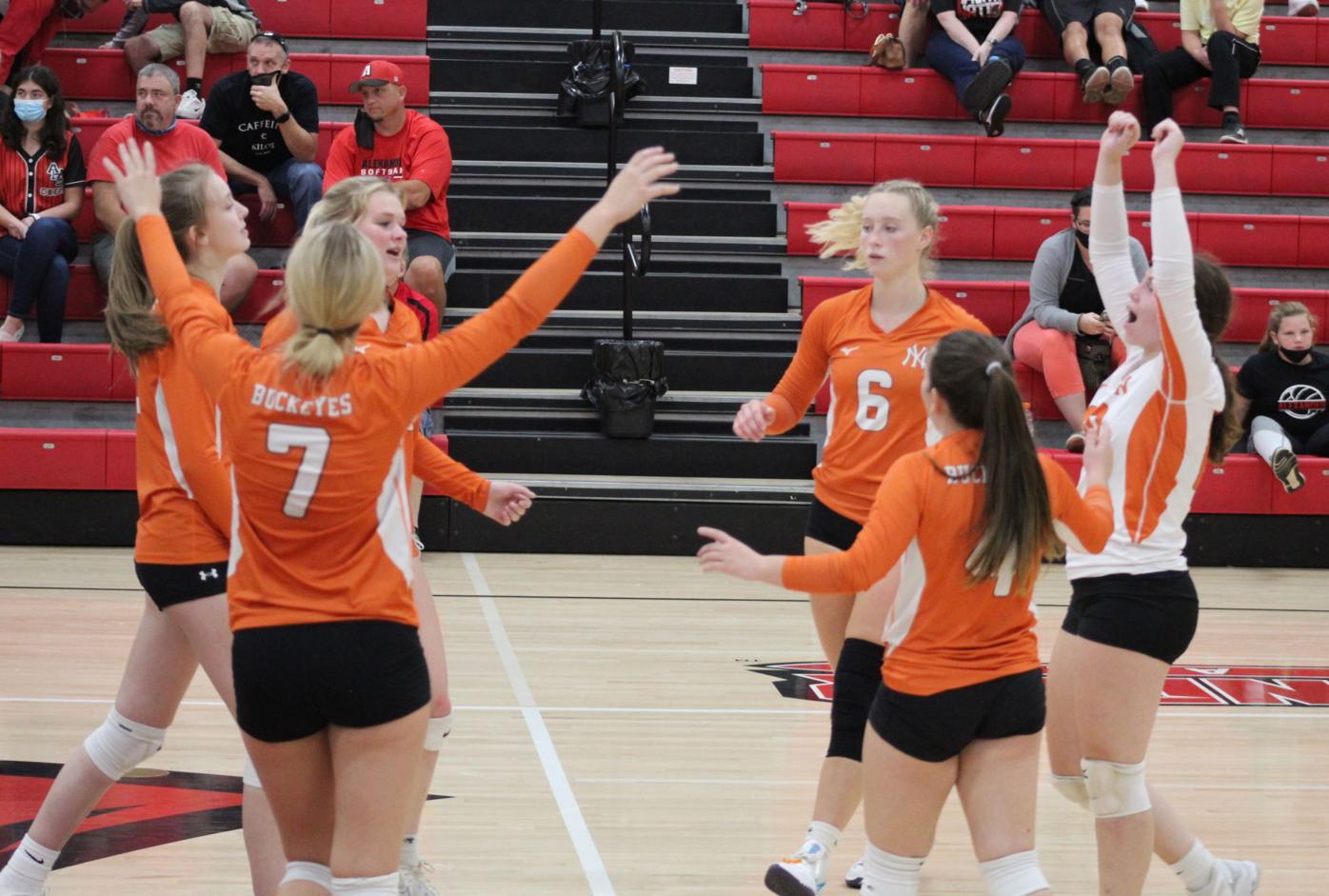 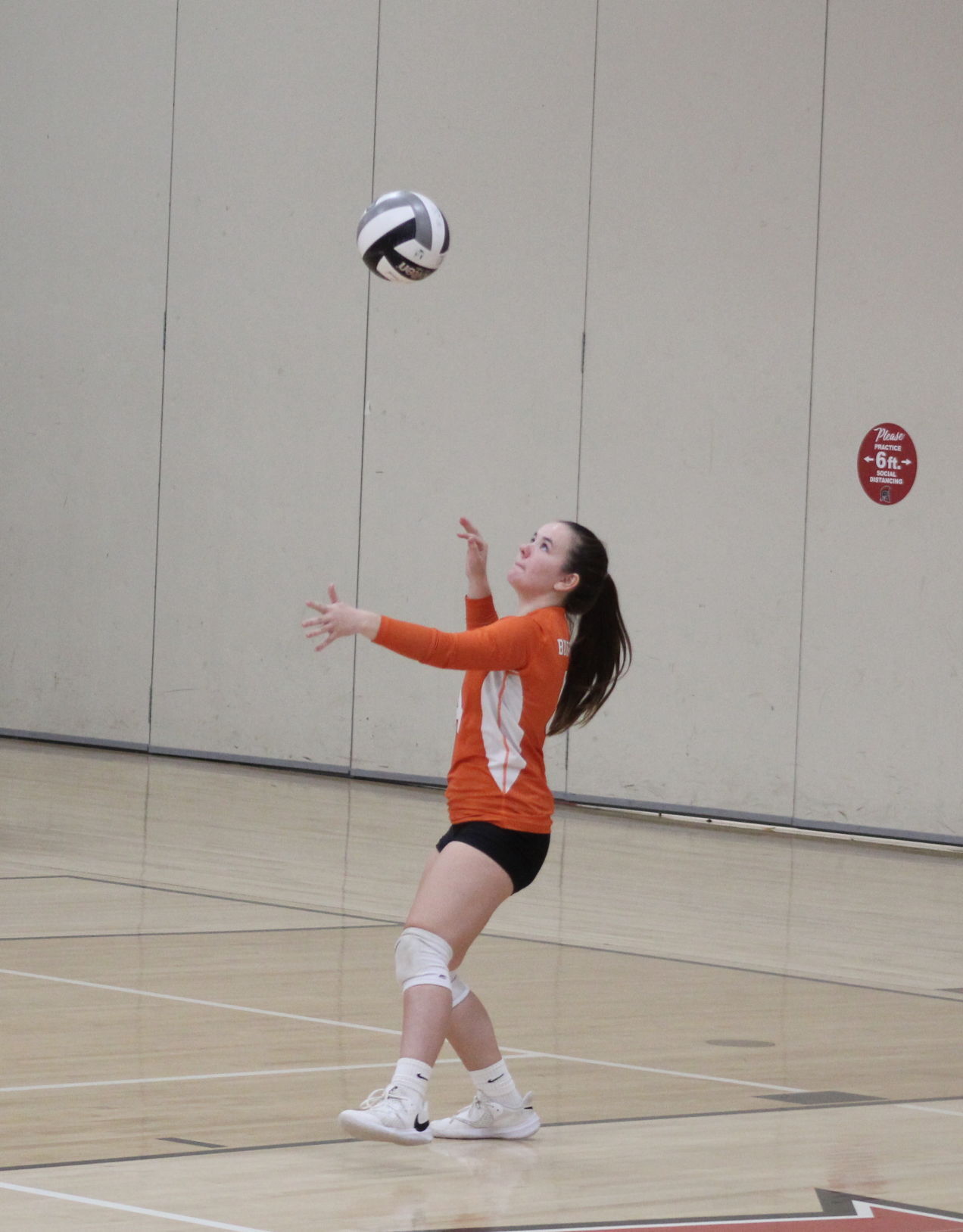 ALBANY — Fittingly enough, Tuesday’s match ended with the ball in Mackenzie Hurd’s hands, as the Nelsonville-York senior served up a final ace.

Hurd had a career night, leading the Buckeyes to a come-from-behind win at Alexander High School.

“I’ve definitely struggled these last few games with hitting my spots, just being consistent,” Hurd said. “I made it a goal to just come in and execute.”

Hurd was all over the court, adding six aces and 16 assists in the Buckeyes’ victory.

“I told Mackenzie before she got that last ace, I said, ‘this is your night,’ because she dominated all aspects of the game,” Nelsonville-York coach Wayne Dicken.

It also marked Nelsonville-York’s first volleyball win at Alexander High School since 2013, and only the second road win in the series for the Buckeyes since 2003.

“It’s nice to play well on their home court,” said Dicken, himself an Alexander graduate. “And we’ve played well at times, but we’ve never been able to come out with a win. For us to win in that fashion tonight, it showed a lot of determination.”

Overall, it ended a 10-game losing streak in the series, as N-Y’s last volleyball win over Alexander came in 2015.

“It’s really awesome because there’s been a lot of great players come through Alexander,” Hurd said. “One played Division I volleyball, so it’s great to have those competitors, but it’s finally nice to feel that redemption.”

While it was redemption for the Buckeyes (14-4, 7-2 Tri-Valley Conference Ohio Division), it was another tough setback for the Spartans (6-11, 4-4 TVC-Ohio).

Alexander led the match 2-1, but couldn’t stop a swell of Nelsonville-York momentum over the final two sets.

“We are still trying to figure out that finish,” Alexander coach Jaime Lutz said. “In the locker room we just talked about how it’s a mental game more than a physical at this point. We just have to stay mentally strong. In game one, we came out on fire and but we don’t have that experience still. We can’t get it in one season.”

The game changed directions on a Buckeye comeback that fell just short.

The match was tied at 1-1 in the third set, and Alexander was in total control with a 24-10 lead. It was seemingly a formality that the Spartans would win the third set and take the lead.

Hurd got a kill, and Lyndsey Spencer went back to the service line.

Brooklyn Richards had a kill, Hurd another kill then Spencer served an ace.

By the time Alexander had an attack error, N-Y was within 24-17 and Lutz called a timeout.

The run continue, with three straight Hurd kills pulling the Buckeyes to within 24-20.

Lutz was forced to call another timeout when a Spartan error made it 24-21, the Buckeyes having scored 11 points in a row.

“Just like coach Dicken said, we needed more momentum going into the next match to progress to get the win,” Hurd said. “I think we just set that as our goal and dug in as far as we could.”

The Spartans finally ended the run when Chloe Payne got a block at the net.

Alexander was up 2-1 in the match after the 25-21 win, but it would be the Buckeyes who turned out to have the momentum in their corner.

“Momentum in volleyball is so important, and if we can find a little bit of momentum, even if we don’t come out with a win, we can put them on their heels,” Dicken said.

The Buckeyes would never trail again, and Hurd hit her milestone with a kill early in the fourth set.

“Mackenzie has always been a great leader for us,” Dicken said. “She’s a gamer. She’s always been a gamer. When we lost that first set, she was mad. She was upset. You could tell and it really came out in her play the second set and for the rest of the night.”

The match stopped and Hurd was presented the game ball. She went into the stands to give it her parents, John and Sandi Hurd.

Then it was back on the court and back to business, as two more kills quickly followed to give N-Y a 9-2 lead.

“Personally, I didn’t know it was going to be my thousandth tonight,” she said. “(Coach) Dicken makes it a big deal, but I’ve never really showed any care for it. It’s an accomplishment, but it’s never been a goal of mine.”

Everything clicked for the Buckeyes, as consecutive Holly Martin aces pushed the lead to 16-5. N-Y eventually cruised to the 25-12 win, forcing a fifth set.

The Buckeyes also never trailed in the fifth set, going ahead 6-1 after another Hurd kill.

“The last couple of sets you could definitely tell the difference in energy between the first two,” Hurd said. “The first two was pretty dead, but I thought we pulled it together. It’s the type of play we need going into tournament.”

The Buckeyes continued to lead 12-2 after Ciara McKinney’s ace.

Chloe Lehman had a kill, then consecutive Hurd aces ended the match, a 15-3 Buckeye victory.

“Everything was clicking for us,” Dicken said. “I’m sure Alexander will be disappointed that they let it slip away, but everything just seemed to be clicking for us that wasn’t clicking at the beginning of the game. We put it all together.”

After trailing 24-10 in the third set, the Buckeyes outscored the Spartans 51-16 the rest of the way. Hurd accounted for 15 kills and three aces during that stretch.

“Credit to her and congratulations to her,” Lutz said. “That’s quite an achievement. That’s exciting. Hats off to her and nothing taken from her. We just couldn’t get our block up to set and to put the ball down. We got a couple touches on it and when we did, we were good, but nothing consistently.”

Lehman and Ryleigh Giffin each had 10 kills for N-Y, with Giffin adding 38 assists.

The two teams will meet again on Oct. 13 at Nelsonville-York, and the Buckeyes will look to solidify what could be a second-place finish in the league behind Vinton County.

“I knew this was going to be a dog fight coming in here tonight,” Dicken said. “Tournament draw is tonight. I really wanted another win on my resume, and luckily we got that. Hopefully it finishes our season well and leads us to a lot of momentum in the postseason.”