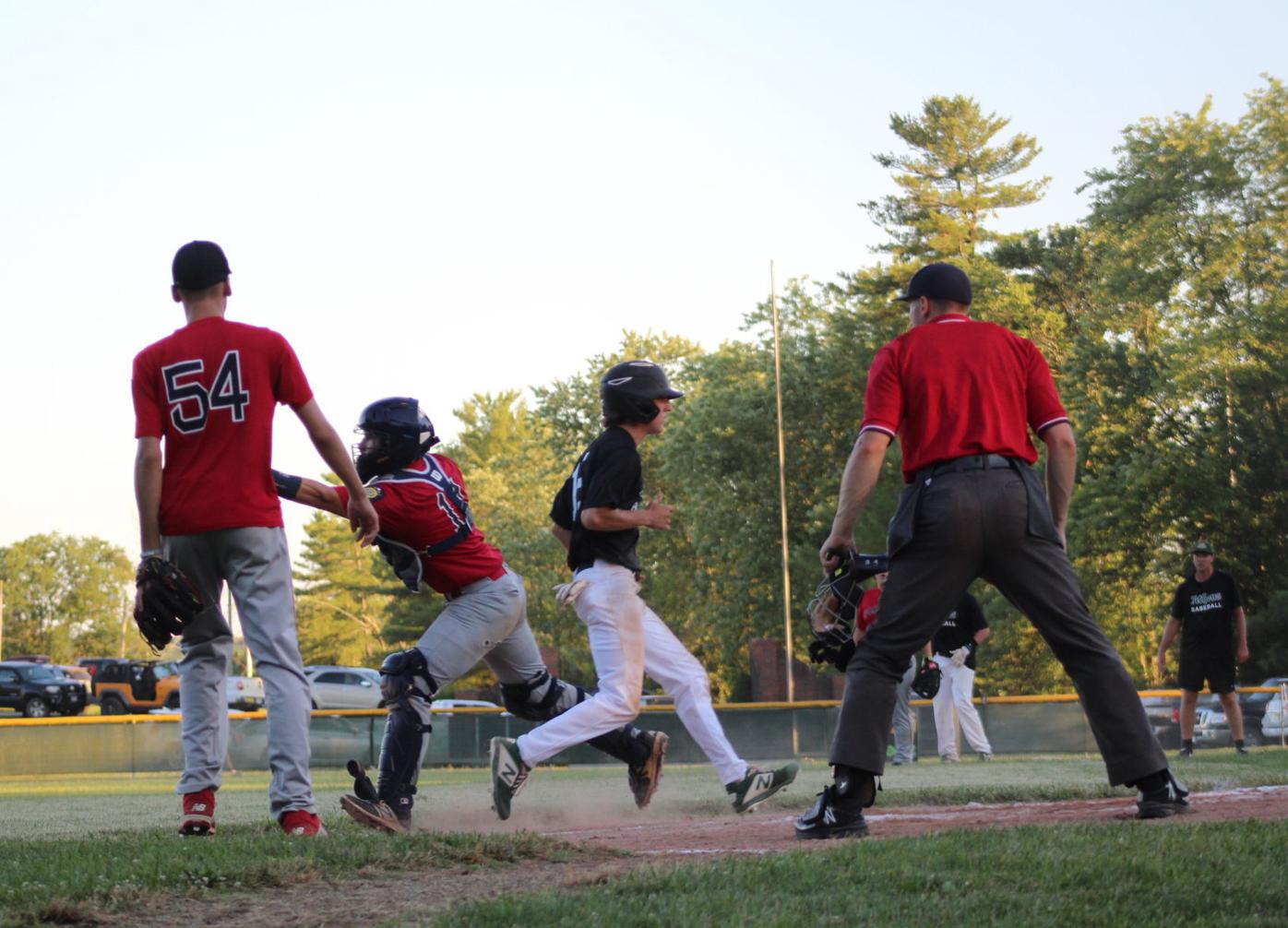 Athens' Shane McDade scores in front of Jackson Post 81 catcher Hunter Cardwell and pitcher Boston Kuhn (54) during Wednesday's contest. Jackson scored two runs in the top of the seventh to post a 7-5 win. 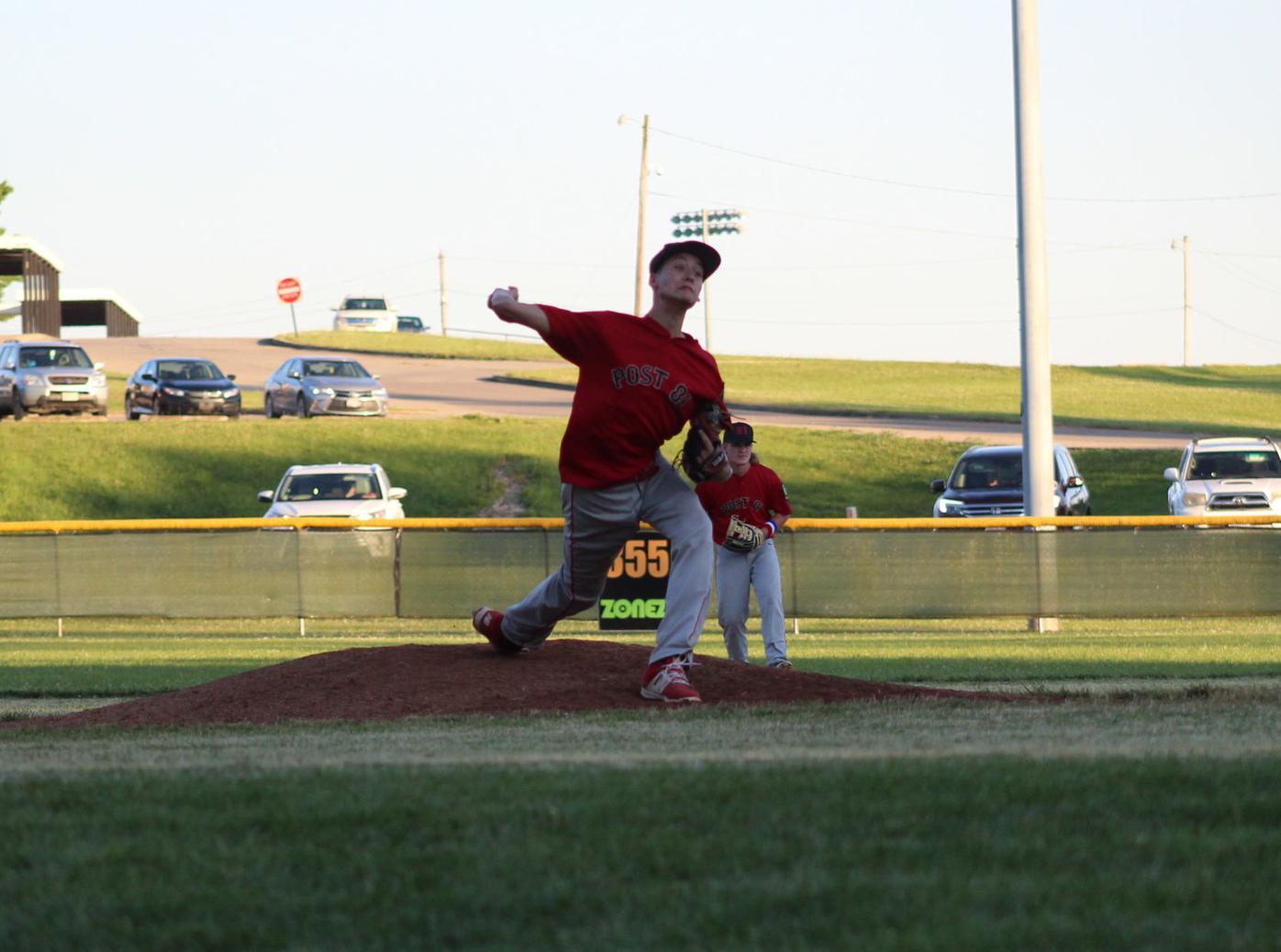 Athens' Shane McDade scores in front of Jackson Post 81 catcher Hunter Cardwell and pitcher Boston Kuhn (54) during Wednesday's contest. Jackson scored two runs in the top of the seventh to post a 7-5 win.

Boston Kuhn was able to hang around long enough to earn a win over Athens.

Kuhn pitched a complete game on Wednesday, and Jackson Post 81 scored late for a 7-5 win over the Athens Attack.

The two teams were able to split a pair of games. Athens earned a 3-1 victory in the first game, which was completed after initially being suspended due to weather on June 18.

It appeared that Athens would finally chase Kuhn from Wednesday's regularly scheduled game. After trailing 5-0, Athens had rallied for two runs in the third and three more in the fourth to tie the game.

However, Kuhn was able to keep Athens off the scoreboard the rest of the way, setting the stage for a seventh-inning win.

It was Kuhn who started Post 81's winning rally. He led off the top of the seventh with a single to left center field against Athens' Nate Trainer.

Kuhn would advance to second base when he took off on a pitch that was in the dirt. With one out, Jackson's Landon Hines dropped a single to center, but Kuhn was forced to hold at second while waiting to see if the ball would be caught.

Trainer was on the verge of getting out of the inning unscathed when he got Zach Bartoe to ground out to shortstop Reece Wallace.

With Hunter Cardwell at the plate, Trainer delivered a pitch that went over catcher Aiden Kostival's head and to the backstop.

Kuhn was able to slide home safely. Kostival's throw back to Trainer at the plate was high, allowing Hines to also score.

Jackson now led 7-5, and Kuhn took that advantage back to the mound.

Kuhn recorded a strikeout, a grounder to third and a pop up to third for a perfect inning.

Kuhn gave up seven hits while striking out nine batters. He hit a batter and walked three.

Athens was charged with four errors in the loss. Jackson led 4-0 after a half inning, taking advantage of a pair of walks and three errors. Isaac Kuhn recorded a two-run single in the frame.

Athens trailed 5-0 before getting to Kuhn in the third. A Jackson error allowed Will Ginder to score, and Peyton Gail would eventually cross home plate after a wild pitch.

Athens evened the game up in the bottom of the fourth with three runs. Jeremy Colburn scored on a Jackson error, and Ginder's single to left scored Shane McDade to make it 5-4. The game was knotted at 5-5 after Wallace scored on a wild pitch.

Jackson was held to five hits despite the win. Ginder led Athens with a 2 for 3 day with an RBI.

In the first game against Jackson, Jack Cornwell was able to finish what he started nearly two weeks ago.

Cornwell went back on the mound in a game that resumed in the fourth inning, with Athens leading 2-0. Cornwell would go the distance in the eventual 3-1 win.

Cornwell — who also hit a solo home run in the game back on June 18 — struck out four and allowed six hits.

Jackson got to within 2-1 with a sixth-inning run. With runners on the corners, Bartoe hit a ground ball to Trainer at shortstop. The 6-4 fielder's choice drove in a run.

Athens got the run back in the bottom half of the sixth. Carson Baker started the inning when he stretched a hit into left field into a double. He advanced to third with two outs on a ground ball.

Andrew Stephens — a courtesy runner for Baker — would score on Wallace's infield single to short, making it 3-1.

Cornwell made the insurance ran stand up. Jackson's Jeremiah Frisby hit a two-out single to bring the tying run to the plate, but Cornwell got a foul pop up to first to end the game.

Wallace led Athens with two hits, while Trainer drew two walks, with each driving in a run.

Athens travels to Beavers Field to play at the Lancaster Post 11 Baseball Classic over the weekend.

Athens was set to take on Troy on Friday at 2:30 p.m., before playing Steubenville Jefferson County on Saturday at 12 p.m. Athens will then play the host Lancaster team at 2:30 p.m. on Saturday, with a possible Sunday game to be determined.