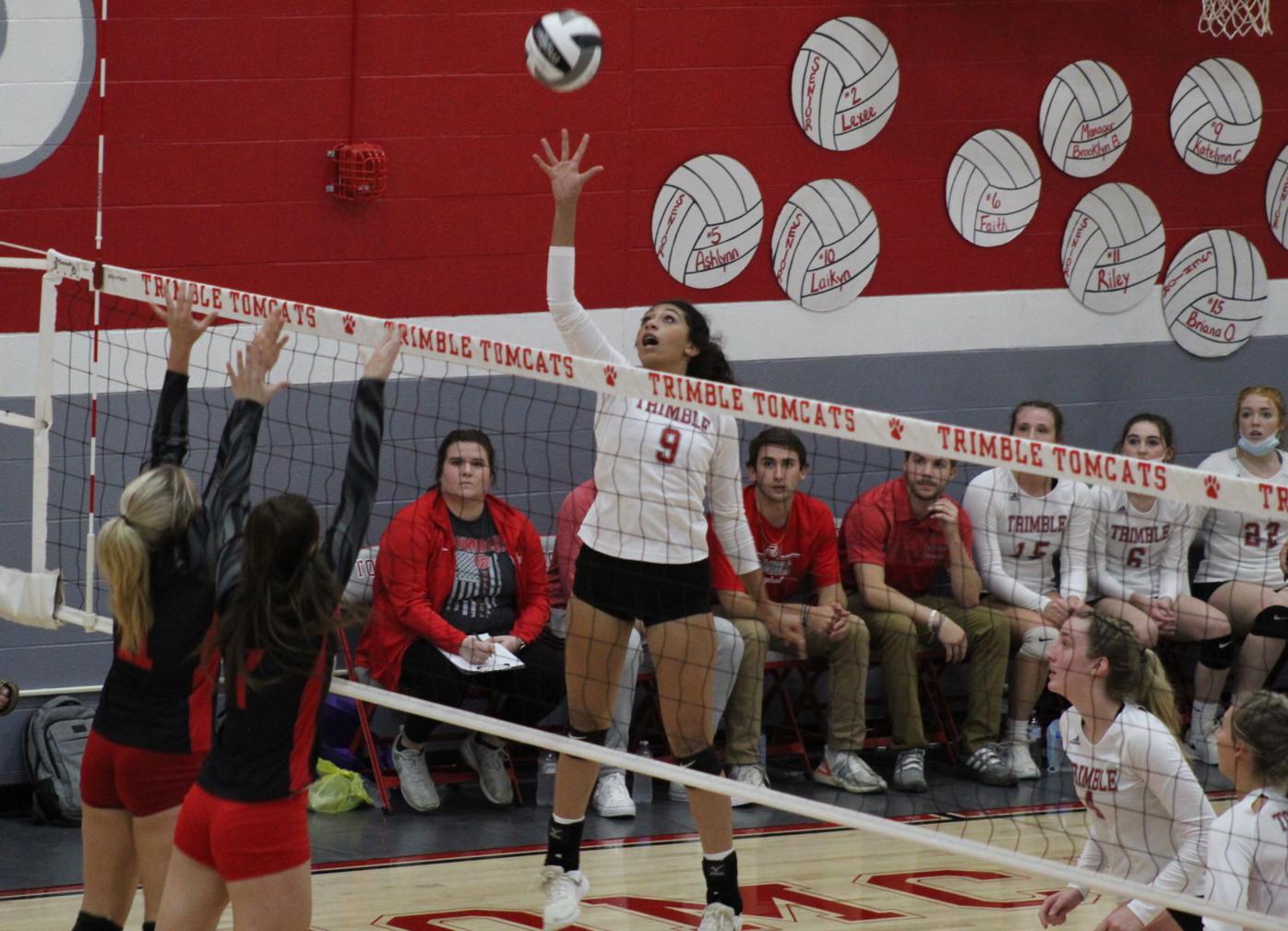 Trimble’s Katelyn Coey (9) goes up for a kill attempt at the net against South Webster on Monday. Coey had 10 kills in Trimble’s five-set loss to South Webster. 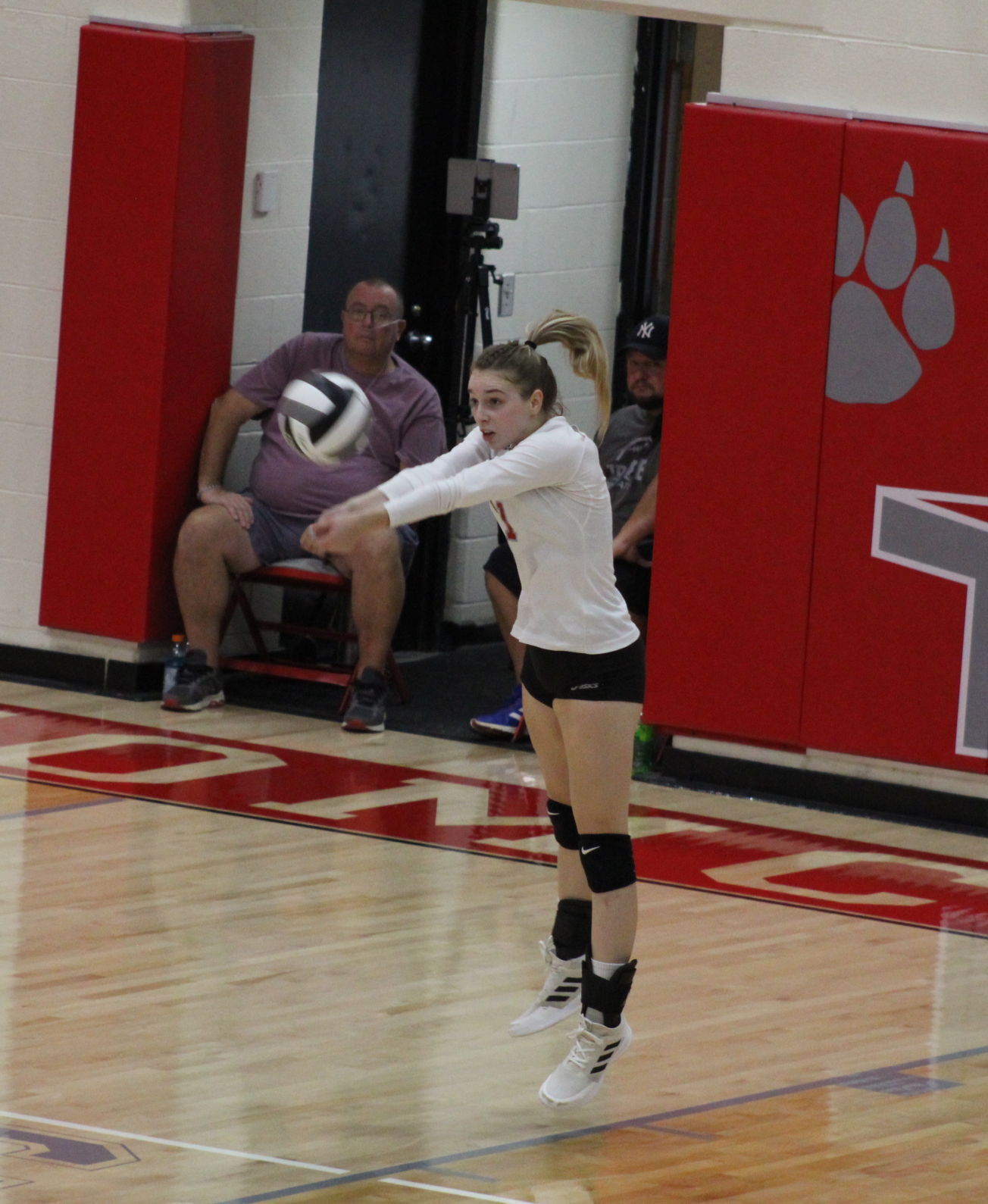 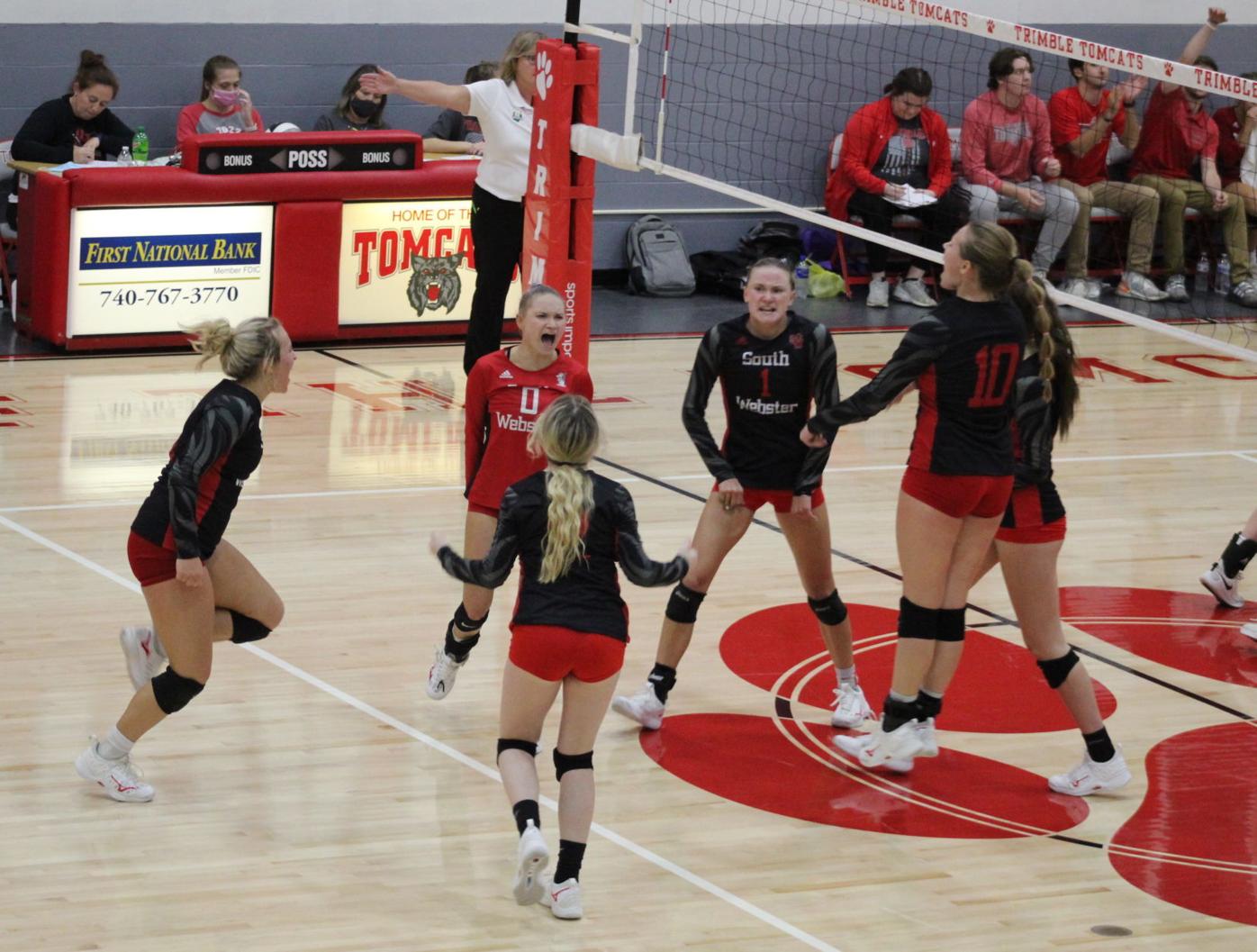 South Webster’s Grace Claxon (0), Briana Claxon (1) and Bella Claxon (10) lead the celebration after the Jeeps won the final point in its five-set win at Trimble on Monday.

Trimble’s Katelyn Coey (9) goes up for a kill attempt at the net against South Webster on Monday. Coey had 10 kills in Trimble’s five-set loss to South Webster.

South Webster’s Grace Claxon (0), Briana Claxon (1) and Bella Claxon (10) lead the celebration after the Jeeps won the final point in its five-set win at Trimble on Monday.

South Webster and Trimble played an instant classic in front of a big crowd at William White Gymnasium, and afterwards both sides can now hope to see each other again in a few weeks.

“You want to be the best, beat the best, and I think Trimble is one of the best in D-4 in southeastern Ohio,” South Webster coach Darcee Claxon said. “Again, I don’t want to get to tournaments having not been pushed super hard. We’ve played teams that have challenged us, but this is the hardest game we have played in a long time.”

South Webster and Trimble are both reigning Southeast District champions in Division IV from a season ago. Sunday’s tournament draw saw the Jeeps gain the No. 1 overall seed, the Tomcats No. 2.

It was the first time all season that either team had played in a five-set match.

“The atmosphere, how good they are,” Trimble coach Shelly Lackey said of South Webster. “Faith Maloney, she got some state honors last year. To be able to come here and play that way, lets me know it’s going to be a really nice tournament run.”

The Jeeps entered having not lost a set since Aug. 28, when they were swept by Adena for their only setback of the season.

The Tomcats did more than just win a set against South Webster, nearly taking the entire match.

Trimble had its offensive firepower on display, as senior outside hitters Laikyn Imler and Riley Campbell delivered shot after shot into the Jeeps’ defense.

Imler led the way with 20 kills, while Campbell had 18.

“They go in hard,” Claxon said. “They’re going in to rip on a ball. Then the other thing is they get you off-balanced with the tip because they have been ripping on balls. For us it was just settling in, being disciplined.”

“We mixed the ball up really well and made them have to think,” Lackey said.

The battle came down to the final set, and South Webster was able to play ahead most of the way.

The Jeeps led 4-1, with Trimble rallying back to force a 4-4 tie after Jacie Orsborne’s ace.

Trimble then led 5-4 after Briana Orsborne and Imler combined to put a block up against Maloney.

“I feel like we blocked some really heavy balls tonight,” Lackey said.

Unfortunately, for the Tomcats, that was the final time they went ahead on the night.

Zimmerman’s kill tied the score at 5-5 and gave the serve to sophomore Bella Claxon.

Her ace gave South Webster the 6-5 lead, part of a run of five straight points that pushed the Jeeps’ lead to 9-5.

The Tomcats rallied to within 9-7 after an Imler kill, forcing a South Webster timeout.

Two service errors in the final set proved critical for the Tomcats, as the final one gave South Webster an 11-8 lead.

Campbell would answer with consecutive kills to allow Trimble to trail just 11-10.

The Jeeps put the game away from there. Rylee McGraw’s kill was followed by a Trimble attack error, lifting South Webster’s lead to 13-10 and forcing a Tomcat timeout.

“You can’t tap at it the end of the fifth set and that’s what we found ourselves doing,” Lackey said.

Briana Claxon came out of the timeout with another kill for a 14-10 lead. Trimble had kills from Campbell and Briana Orsborne to trail 14-12.

Briana Claxon had the final kill of the night, allowing the Jeeps to gain the 15-12 win in a wild night of volleyball.

“I have four seniors on the team and I think they just had some grit and some perseverance, and we knew coming in this was going to be a game,” Darcee Claxon said. “Trimble is an excellent team and we were really looking forward to being challenged, especially so close to tournaments.”

South Webster opened the match by pulling away for a 25-19 set-one victory.

Trimble established itself in the second set, going ahead 10-5

The Jeeps had won their previous 13 matches in three sets, including a sweep at Vinton County on Sept. 18.

The Tomcats played their best volleyball in the fourth set.

South Webster was within 10-7 when Briana Orsborne’s kill started an 11-4 run, the Tomcats leading 21-11 after Imler’s block at the net.

Campbell had the final kill of the set, sending both teams into a decisive fifth game.

Monday’s game wasn’t originally on the schedule. When a cancelation gave the Jeeps an opening, the two teams decided to get on each other’s schedule.

“We put out some feelers and Trimble was like ‘hey we’ve got a game,’ and I’m like, ‘let’s play,’” Darcee Claxon said. “There’s a part of you that thinks, ‘do we want to show our stuff going into the tournament?’ But I’m of the firm belief that if you’re going to make a deep tournament run, it’s because you are the one who is the best.”

The two teams will open their respective tournament runs by hosting sectional finals on Oct. 20. Each will need to win three matches to win district championships.

If that happens, Trimble and South Webster would play again on Nov. 4 at Bloom-Carroll in a Division IV regional semifinal.

There is still a lot of volleyball to be played in the coming weeks, but Monday’s match certainly felt like a tournament preview. Lackey said the Tomcats hope they can get another shot at the Jeeps.

“Do I want to see them again? You betcha,” she said. “I really do. I think Darcee is a great coach. I have a lot of respect for her, and she’s got great players.”